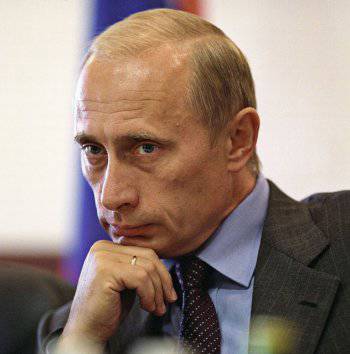 In the USA in one and a half years presidential elections are coming. And Obama for the year and a half announced his intention to fight for the presidency. In the USA, he is today the main candidate from the current party in power.

In Russia, the presidential election is less than a year later, and the main candidate remains uncertain. There is a certain logic in this: since the main struggle in Russia in the current scenario would not be between the government and the opposition, but within the government with two leaders, defining the main candidate today would mean in one variant a massive transfer of power groups to his camp and the transformation of the second figure in the nominal figure, in the other - the split and the beginning of a tough struggle within the elite.

Actually, this is the logic that justified itself 4 a year ago, when uncertainty remained as long as possible - almost until the beginning of the formal presidential election campaign.

It can be assumed that the authorities (first and foremost, Vladimir Putin) intend to repeat the same scenario and maintain the current balance of forces for as long as possible. Moreover, the one who becomes a certain candidate becomes a specific target for informational and other political attacks. But it only seems that today the situation is different, and the old script may not bring victory to its author. In general, the repetition of the same method often leads to a decrease in the chances that it will bring success.

If the thesis is officially announced, according to which, before the beginning of the election campaign, Putin and Medvedev, as people of one team, will sit peacefully and decide which of them are more promising and more effective to nominate their candidacy, it’s increasingly likely that both sides are not equally peaceful waiting for a decision.

From an information and propaganda point of view, Medvedev began his campaign a long time ago. He, as already noted, behaves not as an acting president, but as a presidential candidate: he uses any reason for displaying informational initiatives, constantly demonstrates certain political intentions ... In fact, one by one he distributes election promises.

In itself, this may well play against him: he begins to bother at least part of society, because his information field is an overabundance. And for those who can be compared in age, he is too reminiscent of Gorbachev with his numerous words, resolute and vague statements and the lack of real (and not ostentatious) actions and, most importantly, lack of results. Increasingly, people are getting a reason to wonder: when does Medvedev work, and does he even work if he takes so much time to participate in registered political talk shows disguised as official meetings and conferences?

If this were all exhausted, the picture would be one. And, perhaps, it would really make sense to continue in the same vein for several more months (although I would still like the president of the country to be working, not just posing for the cameras).

However, Medvedev is clearly active in a different way. So, with might and main is the process of changing frames. And the placement of new leaders in the field is hardly disloyal to the one who appoints them.

Those who were appointed by Putin are removed, and those whom Medvedev approved are placed. Moreover, in cases of such a rotation, it is sometimes clearly demonstrated that those who have shown their sympathy for Putin are removed from office. People perceived as advisors and assistants to Medvedev in public opinion are coming up with more and more outspoken (and brazen) initiatives calling for a rejection of the policies and approaches of the Putin times. Moreover, these speeches are not even disguised as "relying on what has been achieved, take a new step in development," and frankly show opposition to 2000's policies. and call not so much to develop it as to condemn and reconsider.

In the country, one can hear a certain otherworldly whistling along which the ghouls of 1990's rise from their graves.

One of the real recognized reasons for the wave of insults to Luzhkov and his resignation is his open positioning as Putin’s supporter on the issue on which the teams of tandem members disagreed.

Konstantin Zatulin was dismissed from his post as deputy chairman of the State Duma Committee on CIS Affairs after supporting the position of the former (which, by the way, is shared by almost 2 \ 3 of Russia's population), in a question considered to be the most obvious example of discrepancies between Putin and Medvedev. And formally this happened at the initiative of the “ER” itself, which, for the time being, considers Putin to be its leader.

After the discrepancy on the question of Russia's unscrupulous position in adopting a resolution that allowed the Western countries to wage war against Libya, the cadres of Putin’s speech were taken from the air. After Putin, having visited Medvedev, drove him to the notorious “Yo-Mobile”, which could be perceived as a message “To Medvedev is a place only in“ Yo-Mobile ”and only as a passenger,” the Kremlin demanded from the TV channels to cut all the frames, on which the president was filmed as a passenger.

In politics, Medvedev (or his entourage) makes it clear that being a Putin supporter is now unsafe. As well as questioning the fact on whom today United Russia is oriented and who is ready to support.

In the state-bureaucratic plan, a signal is sent to the apparatus, “who is stronger” and on whom it is necessary to bet. In the ideological sense, the approaches that were rejected and condemned during the reign of Putin are being resurrected. Against the background of the respectful attitude of the authorities towards the Soviet period stories A number of elements of Medvedev's rhetoric and the provocative initiative of his assistants from the Human Rights Council are no longer so much a call for a campaign for “de-Stalinization”, but for a campaign for “de-Stalinization” of Russia.

Maybe this is some kind of deliberately played out scenario, in which Medvedev, either in coordination with Putin, does some “dirty work”, or deliberately leads a provocative line, making Putin’s return more and more desirable for society with every step.

But it is very much like a conspiracy and the preparation of a coup, not only political, but also military. Especially cleaning the security officials: Medvedev removes them already a dozen a week.

And this is reminiscent of the situation in Chile on the eve of the Pinochet coup 11 September 1973. Before the military came out against Allende, a mopping-up operation of all his loyal officers and generals was carried out in the security forces. They were summoned to the ships, taken to the sea and shot.

Allende then relied on a constitutional resolution of the situation - to hold a plebiscite to expand the powers of the president. The organizers of the military coup did not allow the Chileans to come to the polls - primarily because Allende’s victory at the vote seemed predetermined.

Putin (if he really did not decide to leave the political scene) is also focused on resolving everything legally - in the elections of parliament and the president.

Allende did not prepare for the military coup, both because he believed in the army’s constitutional loyalty and because he had many supporters in it. And personally trusted General Pinochet.

Putin has traditionally been able to count on the support of the security forces as a whole and of his supporters placed in them. And as if he personally trusts Medvedev.

But Pinochet spent purging in the army and destroyed the supporters of Allende. Medvedev today carries out personnel rotation in power structures, not to mention bureaucratic ones.

Putin, of course, knows better. Maybe all this is his game. But if not, then it's time to choose and decide. And, probably, it is not necessary to be like Allende and reduce all the options to the expectation of the voting day.

By the way, on Saturday evening, the day before the coup, the commander of the carabineer corps told Allende that he knew about the plot, was loyal to the president and ready to carry out any of his orders to prevent the coup, in particular, to arrest anyone involved in it. Allende did not agree to use such methods and waited for a plebiscite. The next day, the loyal commander himself was arrested and removed by conspirators, and Allende was overthrown and killed.

Putin is not Allende. Forces are for Putin. While the parliament is still ready to fulfill any of his will. The people are for it. And the methods, of course, can be different. But it seems that the waiting time is over. It's time to decide and decide.

There are many complaints about Putin, and quite justified. But the alternative may not even be Medvedev, but his assistants and advisers, nostalgic for the 1990's times ...