How do Russian snipers 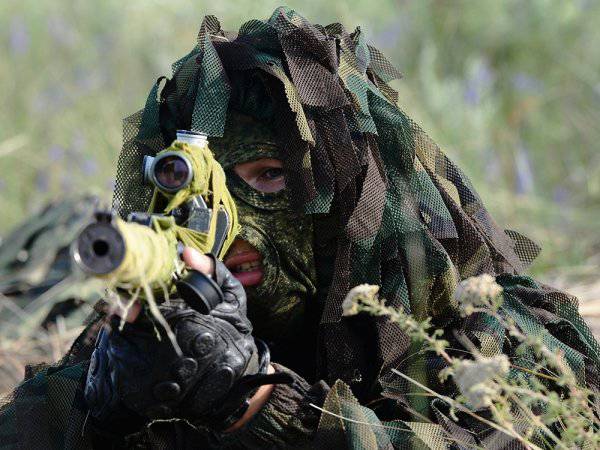 Sniper is a special profession, surrounded by a veil of secrecy. Lifting the veil, we learned where Russian snipers are trained, what Alpha shoots from, why shooters have old tires, how to lure a target on a fly and why snipers do not behave like in the movies.

Army snipers are trained in every military district. In Solnechnogorka, near Moscow, there is, if I may say so, an academy - here snipers of elite units train, and their colleagues from military units improve their skills. In addition to shooting and masking, the training course includes ballistics, survival, meteorology, observation, sapper, tactics and communication. And this is not a complete list of knowledge necessary for a sniper.

From time to time, officers of the Solnogorsk center are sent to practice in the “hot spots”.

- Our first trip took place in early November. The fourth we were thrown under Bamut, - said the sniper, nicknamed Sasha the Great. - Here we were given to army units, worked on the front end. A sniper woman worked against us. Calculated it for a long time. And one day, when she changed position, I got her. The distance to it was almost a kilometer. SVD at such a distance is ineffective, but for my B-94 just right. Replacing the position, the sniper hid behind a tree, but in the thirteen-fold sight I clearly saw her croup, protruding from behind the trunk. He took the first shot.

Tire Shot
To work, a sniper needs a comfortable, protected, invisible position, and not one - after two or three successful shots the place must be changed, otherwise you risk becoming a victim of antisniper and artillery. In addition, we need positions of observation, a jump — from where one can quickly advance for firing — and safe escape routes. They, too, should be several and the way these snipers are prepared in the first place.

- A very comfortable position - padded armored vehicles with an emergency hatch in the bottom. Inside the sniper is invulnerable to small weapons. The abundance of hatches and embrasures expands the area of ​​shelling, and the hidden protected exit allows you to quietly and safely leave the position, ”said the officer Sasha the Little.

Before entering the position, the sniper inspects the background and masks it. A gross mistake will be located on the crest of the rock, where the shooter in the best camouflage will stand out clearly even on an overcast day. A skilled sniper will descend from the ridge to the slope, facing the enemy, and take a position in the shadows. One should be friends with a shadow - it conceals the outlines, the optics does not shine in it. But not with everyone. New shadow on a well-known enemy area will cause suspicion. Therefore, working in the morning and in the evening, the sniper chooses a position so that his oblique shadow does not catch the eye.

Disguise - sniper rescue. In case of detection of an arrow on him hurricane fire from all that is at hand. Either they try to capture him alive - it is still unknown what is worse. Therefore, the art of camouflage in sniper schools is taught carefully and camouflage their graduates are engaged daily and painstakingly.

The most comfortable suit for the sniper is shaggy. It is poorly detected by ultrasonic and infrared equipment, night vision devices. Turned "wool" inside it warms perfectly, it can be used as a laying, blanket or hammock for sleeping. Before entering the position, the shaggy camouflage is additionally painted under the terrain.

The main principle of disguise - the eye of the observer on it should not stop. Garbage is best suited for this, and snipers often arrange their positions in landfills. The arrows of the Great Patriotic War carried with them an artificial stump, in modern snipers it was replaced by an old tire. The embrasure in it is disguised as a natural impulse, from the inside is inserted an anti-slat.

Ready or not, here I come
In war, all tricks are good - for example, bait. A great way to deliver a target to the affected area is a weapon. Sniper tries to shoot an enemy soldier so that his machine gun remains on the parapet. Sooner or later, someone will try to pick him up and also get a bullet. A sniper can ask scouts during a night raid by a reconnaissance group to leave in the field of his activity a spoiled pistol with a silencer, a brilliant clock with a broken mechanism, or another lure. Whoever crawls after her will become his client.

A sniper will shoot a person in an open area so that he loses the ability to move. And he will wait for him to come to the rescue. They will shoot the assistants, and then finish off the wounded. If the sniper shoots at the group, then the first shot will be at the one coming from behind - so that the others will not see that he fell. While the comrades of the murdered person realize what's what, the sniper will shoot two or three more.

Matrimony
Snipers "Alpha" and "Vympel" shoot from British AW rifles, put into service in the middle of the 80-s. The abbreviation stands for Arctic Warfare - arctic warfare and means that the weapon is adapted to work at low temperatures. Created a rifle by Malcolm Cooper, world and Olympic shooting champion. It uses NATO NATO ammunition caliber 7,62 millimeters, and its accuracy is such that at a distance of 550 meters a series of five shots fit into a circle with a diameter less than 50 millimeters.

Army experts use the Dragunov sniper rifle and the Tula V-94 "Burglar". The SVD was good in the first series, until in the 70-ies for the sake of firing armor-piercing incendiary cartridges did not change the pitch of the barrel rifling. The accuracy of the "Burglar" is one and a half times higher, and the initial energy of the bullet exceeds that of the SVD five times. The 12,7 mm B-94 chuck penetrates an armored vehicle. However, the rifle is long - 1,7 meters, heavy and very noisy. Use it recommended in headphones.

About sights for sniper rifles, you can write a book. We can only say that for different tasks different ones are used: the required multiplicity, day and night, with and without laser illumination of the target. By the way, AW has different trunks for different purposes ...

Not like in the movies
They like to show snipers in action movies - the truth is, the work of screen shooters is far from reality. Experts pointed to the two most common mistakes of filmmakers:

- The real sniper never works alone. Usually there are two people in the firing position: the shooter and the observer, who corrects the fire and monitors the situation. The sniper looks at the sight, and his viewing angle is small. It happens that a whole group helps a working sniper: the observer corrects the fire, the machine-gunners cover the flanks, the sappers undermine the approaches - but this group is less mobile and much more visible. The most common option is a couple, ”said Viktor Petrovich, a sniper.

While aiming the victim, the cinematic sniper usually slides the barrel of the rifle out of the window - so the screen will be more effective. This shooter is firing from the depths of the room: the sound of the shot is significantly muffled by the walls, the powder gases also remain inside, and it is difficult to see the sniper in the dim window.