Creeping Nazism. How did the banderization of Ukraine take place in Soviet times? 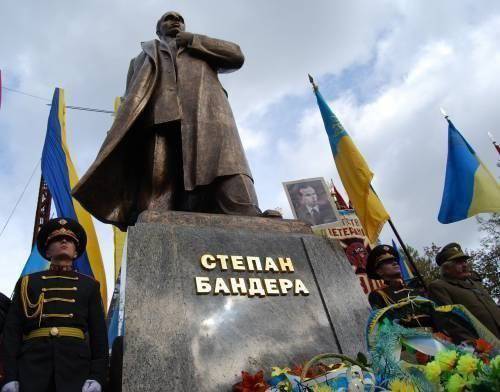 What we see today in Ukraine can be considered the result of a long-term, purposeful and well-planned work. Work on the implementation of the middle 1950-x, and even earlier, nationalists in the top, middle and lower levels of leadership in the beginning of Western Ukraine, and then the entire Ukrainian SSR. With their help, Western Ukraine carefully prepared and multiplied the anti-Soviet, and, in fact, Russophobic "soil", which then, as the USSR weakened and, accordingly, the control functions of the Center, began to spread to other Ukrainian regions.
Moreover, the introduction of nationalists into the Ukrainian Communist Party and their further advancement along the career ladder began in the 1920s.

Thus, according to the head of the 4 Office of the NKVD of the USSR, Sudoplatov, deputy head of the 3 department of the NKVD of the USSR, Ilyushin from 5 in December 1942 (No. 7 / s / 97) legalized, entered the UKP, and used legal opportunities to step up nationalist work ... These individuals were in the service of the Germans with the arrival of the German invaders to Ukraine. ” It is obvious that in the last Stalinist decade (1921-1944) it was not easy for the “zapadentsa” to enter the party-state bodies of Ukraine. But then ...

Rehabilitation in 1955, on the initiative of Khrushchev, who collaborated with the Nazi occupiers during the war years, according to many experts, opened the valves for the “political naturalization” of former OUN citizens who returned to Ukraine, who subsequently repainted into Komsomol members and communists.

But they also returned from emigration by no means “pro-Soviet”. According to a number of North American and West German sources (including those that existed in 1950 - early 1970 of the Munich Institute for the Study of the USSR and Eastern Europe), at least one third of Ukrainian nationalists and their families rehabilitated in the middle - second half of 1950. By the middle of the 1970s, they became heads of district committees, regional committees, regional and / or regional executive committees in Western, Central and South-Western Ukraine. And also - leaders of various ranks in many Ukrainian ministries, departments, enterprises, Komsomol and public organizations, including the regional level.

By the same estimates, as well as archival documents of local party organs, at the beginning of 1980. in the total contingent of the regional party committee and district committees of the Lviv region, the proportion of persons of Ukrainian nationality rehabilitated in 1955-1959 and repatriates exceeded 30%; in the Volyn, Ivano-Frankivsk and Ternopil regions, the figure ranged from 35% to 50%.

A parallel process developed from the outside, since from the middle of 1955, Ukrainians were returning from abroad. Moreover, already in 1955-1958. in general, not less than 50 thousand returned, in the next 10-15 years - still about 50 thousand.

And what is interesting: the exiled OUN members in 1940-x - the beginning of 1950-x managed, for the most part, to find gold mines in the Urals, in Siberia and in the Far East. Therefore, they returned to Ukraine with large sums of money.
The repatriates from other countries were not poor either. And almost immediately after returning, most of the deportees and repatriates bought houses with lots or built their own, or “built in” into housing cooperatives that were expensive at that time.

Obviously, after the Khrushchev rehabilitation of 1955, the leadership of the OUN and other nationalist corordon structures adopted in 1955-1956. decisions on the gradual introduction into the party and state structures of the Ukrainian SSR. It was noted that there will be no insurmountable obstacles on the part of local authorities. In a word, the nationalists changed their tactics, began to support the "pro-Western" anti-Soviet dissidents in Ukraine in every way, skillfully introduce chauvinistic assessments and appeals to the public consciousness through the publishing houses and the media of the Ukrainian SSR. According to political historian Klim Dmitruk, these events were supervised by Western intelligence services. In addition, in the USSR they did not dare to strongly “put pressure” on Eastern European countries, through whose territories (except perhaps Romania), both ex-OUN citizens and the new, more prepared, nationalist growth continued to penetrate into Ukraine from abroad.

According to a number of assessments, if this project were a success, similar requirements of the Baltic and Transcaucasian republics would follow.

Therefore, Moscow did not consider it necessary to meet the request of Kiev, although this proposal was supported by the native of Poltava region, the head of the presidium of the Supreme Soviet of the USSR N.V. Podgorny. Moreover, according to the memoirs of A.I. Mikoyan, it was then that Shelest was not simply "put in his place", but also deleted from the list of "Brezhnev's friends." However, even after that, the influence of the “Ukrainian group” in the Kremlin remained significant, and Shelest was dismissed only six years later, and Podgorny - through 11.

Meanwhile, back in September 1965, the Central Committee of the CPSU received an anonymous letter: "... In Ukraine, the atmosphere is growing more and more tense on the basis of the national issue, due to the desire of some people in Kiev to conduct the so-called Ukrainization of schools and universities ... Is it in the CPSU Central Committee, it is not clear that a violation of any status quo, and even more so in this matter in Ukraine, will cause hostile relations between Russians and Ukrainians, will inflame very many low passions for the sake of and for the needs of Canadian Ukrainians? .. ” But even the analysis of this “signal”, we note, did not lead to the resignation of P. Shelest.

In addition, the “returnees” were not hindered from joining the Komsomol or the party. True, some of them had to change their names, but that was, of course, a low fee for moving up the career ladder.

At the end of 1960's, on the initiative of Shelest, a mandatory exam in the Ukrainian language was secretly introduced in Ukrainian humanitarian and many technical universities, which, by the way, was welcomed by many media outlets of the Ukrainian diaspora in North America, Germany, Australia, Argentina. They believed that this order would suspend the "Russification" and the Sovietization of Ukraine. Subsequently, this decision was “put on the brakes”, but even after that many teachers demanded that applicants, students and applicants for scientific titles, especially in Western Ukraine, take exams in the Ukrainian language.

And approximately from the middle of the 1970-x, due to the further strengthening of the position of the Ukrainian (especially the Brezhnev-Dnepropetrovsk) clan in the top leadership of the USSR and the CPSU, the naturalization of the nationalists became almost uncontrolled. What again contributed to the generally mild attitude of the leadership of Ukraine during the entire post-Stalin period to the growth of nationalist tendencies in the republic. And the replacement of Shelest by Shcherbitsky led only to a more veiled development of nationalism, and, moreover, in very sophisticated, one might even say, Jesuit ways.

Well, what would seem to be bad is that, in particular, the number of schools with Russian as the language of instruction has increased, the number of mass media has increased, including radio and television programs in Russian? What quickly began to grow circulation of literature in Russian? However, this caused latent discontent in the nationalist-minded circles of Ukraine, contributed to the strengthening of such sentiments in society.

At the same time, according to the research group of the Internet portal of the CIS, Ukraine still remained in a privileged position compared to the RSFSR, which did not even have its own Academy of Sciences, unlike the Ukrainian and other Union republics.
Under P. Shelest, who headed the KPU Central Committee in 1963, more Ukrainian-language literature and periodicals began to be published, and this process began from the 1955 year. At official and other events, representatives of the authorities advised speakers to speak in Ukrainian. At the same time, the number of the Communist Party in 1960 – 1970 years increased by a record — compared to the growth in the number of members of the Communist Parties of other Union republics — by almost 1 million people.

The pro-Western nationalist dissidence in Ukraine has also been actively developed, at least one third of whose leaders were, again, former OUN people. In the Lviv and Ivano-Frankivsk regions, at the end of the 1950s, underground groups “Ukrainian Workers 'and Peasants' Union”, “Lawyers and Historians Group”, and “Independence Square” appeared. They discussed options for the de-Sovietization of Ukraine and its secession from the USSR. And in February, at the 1963 of the year at a conference on culture and Ukrainian language at Kiev University, some participants suggested giving Ukrainian the status of the state language. No appropriate measures were applied to such groups in Ukraine. It turns out that the adherents of Ukraine’s advance towards “separatism” were also in the leadership of the KGB of the USSR.

In this regard, it is noteworthy that the leader of the Melnikovites (by the name of the leader of one of the groups of the OUN - A. Melnik) A. Kaminsky in 1970 published a voluminous book “For the Modern Concept of the Ukrainian Revolution” in the USA and Canada. It could be obtained through second-hand booksellers in many cities of Ukraine, on book collapses, in book societies, from foreign correspondents. As A. Kaminsky stated, “the national revolution in Ukraine is quite possible, and it needs to be prepared. And for this, we don’t need (we don’t need them any more! - I.L.) underground structures ... In order to rally the people against the Soviet regime, evolutionary possibilities are enough. ” And the basis of the line on such a revolution is to “put the preservation of one’s own language, culture, national identity, love for one’s native people, traditions”. And if "skillfully using the international and domestic situation, we can count on success ...".

Therefore, Melnyk and Bandera from about the middle of 1960-s refused to be the main underground struggle for them, reorienting, according to expert estimates of the CIS Internet portal and a number of other sources, in tactical considerations to support Ukrainian dissidence in any of its forms and manifestations. Especially in support of the “protection of human rights in the USSR” inspired by the West, into which nationalist implications were very skillfully included. In any case, a mediocre creative worker in Ukraine, and not only there, often became a widely advertised “prisoner of conscience” or received no less spectacular Western “labels” of the same kind.

The development of these tendencies was promoted by the fact that the ideas of the Russophobic “independence”, though not publicly at that time, were shared by a considerable number of Ukrainian party-government partners.

The entire Soviet period in Ukraine was practically the successful link of the nationalist movement with the party apparatus.

And since a considerable number of his representatives grew out of the OUN movement, this secret union eventually proved successful. For nationalists and their western patrons, of course. In this regard, noteworthy is also the creation in the 1970-x - early 1980-x. Soviet export gas pipelines mainly in the territory of the Ukrainian SSR. Many media outlets of the Ukrainian diaspora at that time and later noted that with Ukraine gaining “independence”, it will be able to dictate its conditions to Russia and will keep it on a strong “hook”. Today another similar attempt is being made, but, as before, hardly anything worthwhile of this will come out of the "Nezalezhnoy" ...

Ctrl Enter
Noticed oshЫbku Highlight text and press. Ctrl + Enter
We are
As anarchists, they wanted to overthrow the Soviet government. The Black Banned Underground in the 1920s - 1930sCreeping nazism
Military Reviewin Yandex News
Military Reviewin Google News
18 comments
Information
Dear reader, to leave comments on the publication, you must sign in.