March 14 2014
3
In the “file” on the GSS, Zuenko Ivan Semenovich found a photocopy of the newspaper article “Astronomical preparation of the navigator”. It is difficult to say when it was published and in which newspaper. I only remember the conversation with the historian Sergienko about the fact that he specifically looked at the file of the Stalin Falcon during the war in search of material for the 8th air corps of the DD. Perhaps this article is from there. It is designed in a "dry", at the level of "stamps" style. This is understandable. What language and method still present specific material for the reader involved in flight matters? Looks like this article was a party order to Captain Zuenko, and he thus fulfilled this order without bothering the readers with a populist “husk”. For the reader, far from navigational affairs, and even a modern specialist, this article may not be interesting. The first because of the specificity of the proposed material, the second because of its obvious banality and a sense of how far the time has gone in these matters. However how historical a document, an article caused me a number of questions and associations, with which I want to share. And therefore I will bring it in full. 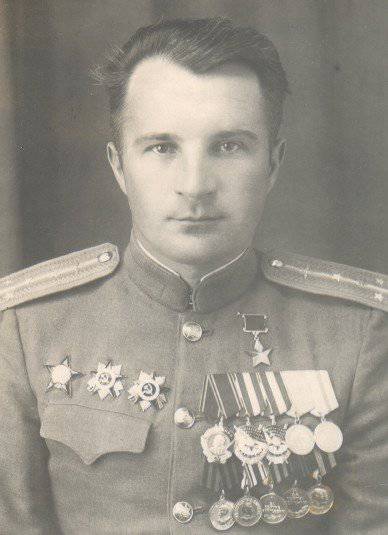 For successful use of astronavigation in flight, the navigator needs a large ground training. He must have excellent practice in measuring the heights of the stars on earth. In addition, the theory should be well studied in order to carry out work on the application of astronomy in the air intelligently, rather than mechanically.

Astronomical training of navigators in our unit is of great importance. The navigators were read a number of informative lectures. Textbooks intended for secondary and higher schools were used for our program in general astronomy. In presenting the material, special attention was paid to issues related to their practical application - the calculation and construction of the somner line, the definition of a sextant correction, the study of the starry sky, and the reckoning of time. As a result, navigators received good theoretical training in astronomy.

In the calculations of the elements of somner lines, the navigators worked on automatism. It is known that an interpolation plate is given to convert the time to an arc in the aviation yearbook. We demanded that the navigators did not resort to it, but made the translation in their mind: using the tables takes a lot of time (especially in the air).

It is very important to teach the navigator to quickly determine the sextant correction. We have this amendment, as a rule, is determined by the moment of the upper climax of the luminaries, since this method, according to our crisis, is the best of all existing ones.

The situation with the practice of the use of astronavigation is much worse. The cabins of many crews are not adapted for height measurements. Therefore, at first we drove all the navigators on a transport plane. This allowed them to see for themselves that astronavigation with good use yields good results.

In the course of the flight exercises of the Combat Training Course, each navigator was given a task to measure the heights of the stars. In this way, navigators mastered the work in the air, learned the speed of measurement.

Hero of the Soviet Union, captain I. ZUENKO.

... Measuring the heights of the stars, calculating and plotting the somner line, determining the correction of the sextant, knowing the starry sky, reckoning time ... this is not a complete list of concepts and practical skills of the navigator aviation long range. By and large, "multi-kilometer" geometry with a touch of trigonometry. And, true, there are a lot of mathematics, and there were no calculators then ... What did the navigator use at that time when performing the calculations involved in flight? Slide rule? This is the first thing that came to mind. The tool is universal.

In the "Wikipedia" article on the slide rule I find a link to an article on the navigation line that has not been developed yet. But in the network I find a suitable tool called the “Air Navigation Bar”, as well as a manual on its use, dated 1939 of the year. There is even an offer to purchase this instrument, however, prices are dancing, apparently from the degree of its wear…

It turns out that the “Air Navigation Line” is a direct analogue of the slide rule for solving specific problems in flight, a list of which is given in the table of contents of this manual. According to this list it is quite possible to judge what and how the navigator expected on earth and in the sky. And it is not difficult to guess that the tasks in the framework of the manual they clicked like nuts, however, I didn’t see anything complicated in them - there are formulas, there are methods and instruments for obtaining data and there is a tool for calculating the final result. Know only where and when to apply this or that device and algorithm, and have the necessary skill in it. Here is their main list:

However, the tasks referenced in the article navigator Zuenko, in this manual a word. But with the help of the “Air Navigation Line”, these tasks are easily solved, the mathematical potential of the design tool is sufficient!

Once in the active parts of the ADD, the young crews underwent retraining of night flights on the ground, and the navigators acquired additional knowledge and skills in the navigator's business. Moreover, the aeronautical line was improved, in 1943, its new model was already in operation: NL-7. And the algorithms and methods for solving vital navigational tasks that young ADD navigators should face in flight were persistently and thoughtfully transferred by experienced tutors, and the skills to solve them were brought to automatism, as can be seen from the article.

In the context of the article, I recalled the description of the commander, navigator and gunner-radio operator of one of the crews of 108 ap DD, given by his father in his book: "The G8 Commander Pasha Gorinov and his navigator Valya Seleznev were high-class flight specialists. They looked like high fellows, always fit officers and with us, techies, were very simple and friendly in communication. Valia Seleznev impressed us with his ability to determine time by the stars with a small error of plus or minus five minutes. Radio operator Leningrad Pashka Karmashev, a radio operator from God, could simultaneously transmit or receive a signal and speak about extraneous topics about something else with you. ”

Many of us experienced a sense of a certain professional confidence in the affairs in which we were involved, if you easily operate with their elements. Well, for example, the designer of reinforced concrete structures itself understands that if the deflection of its element is normal, then its strength is sufficient. And he achieves this, with the invariance of the geometric characteristics of the structure, by varying the brand of concrete and the class of reinforcing steel, which also affects not only the deflection, but also the strength of the element.

But the designer will certainly “take off his hat”, at least mentally, in front of the Turkmen - the chef who prepared excellent pilaf, thereby recognizing him as a professional in his field. And the Turkmen chef will only spread in a grateful smile for the recognition of his skill and for delivering pleasure to the eater. And each of them will consider himself a professional. This feeling of confidence in their professional skills was achieved by instructors and instructors on the ADD regiments when young crews entered combat work, and how this “dry” full of “cliches” was written by Captain Zuenko.