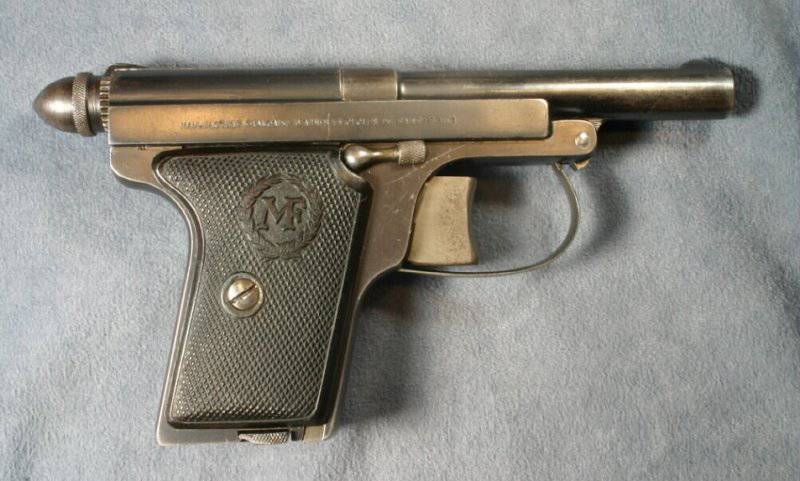 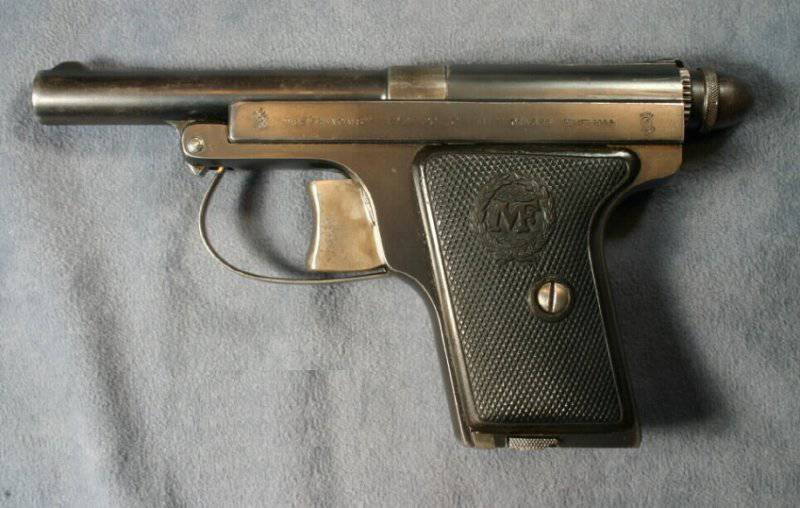 In order to offer a more accurate shooting pistol to the market, the company Manufacture Francaise d'Armes et Cycles de Saint-Etienne in 1922, the company released a new model called "Policeman" (Le Fran? Ais Type Policeman). it weapon it differed from the pocketmodel only by a longer 88 mm barrel and a characteristic flap at the rear of the valve. 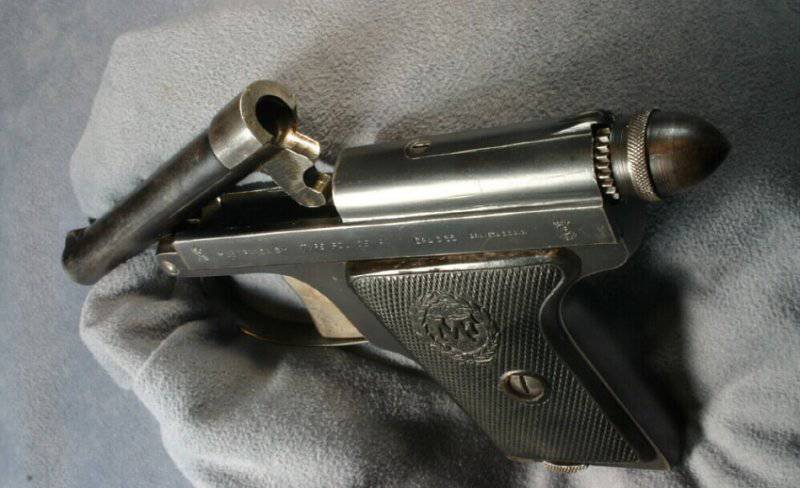 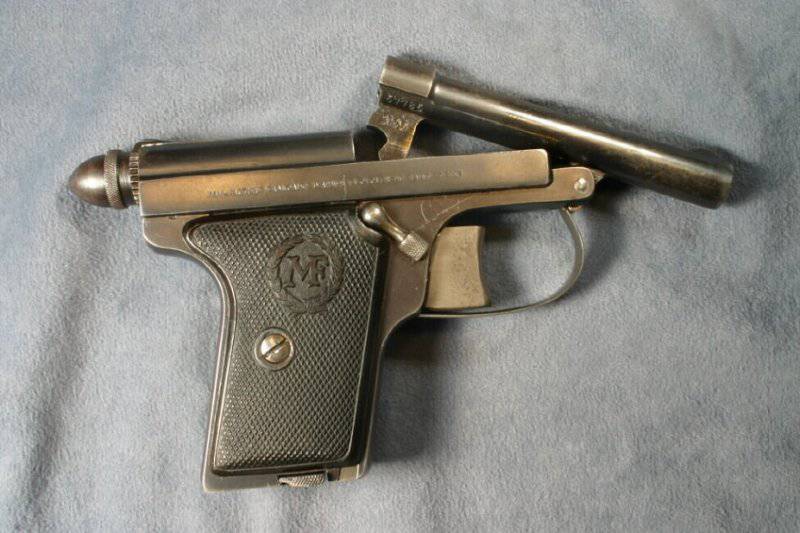 The gun had the same caliber as the previous model Browning 6,35 × 15,5 HR (later pistols chambered for Browning 7,65mm caliber were produced), overall dimensions of the weapon 24 × 94155 mm, weight without 370 cartridges gr. 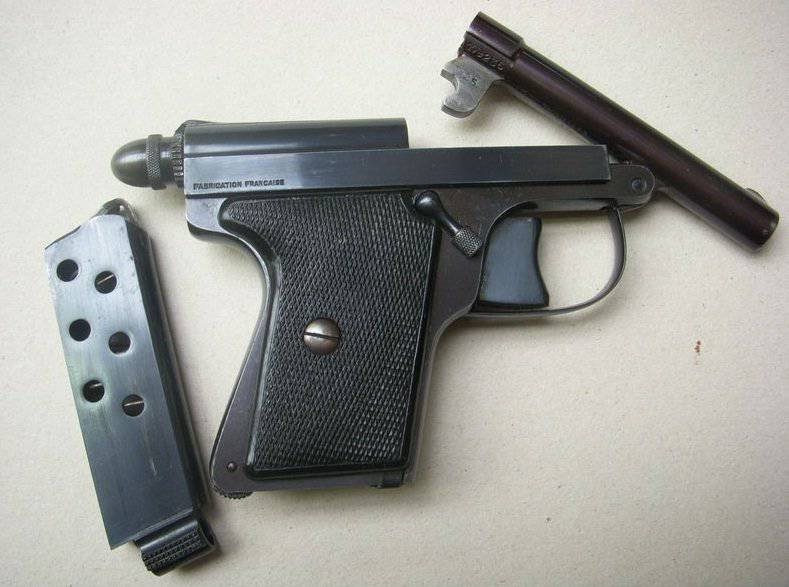 The weapon's capacity was determined by the ratio: 7-8 ammunition in the magazine (6,35 mm weapon weapon stores accommodate 7 ammunition, weapon stores of other calibers - 8 ammunition), 1 in the cartridge chamber and 1 cartridge in the holder of the lower part of the magazine. The spent cartridges are thrown out of the barrel due to the pressure of the powder gases when fired, to remove the unexploded cartridges and to load the pistol with the first cartridge, the barrel was hinged up by the breech upwards on the hinge, for which there is a lever on the frame above the trigger. Sights consist of a pointed fly, which is made integral with the barrel and the sight. 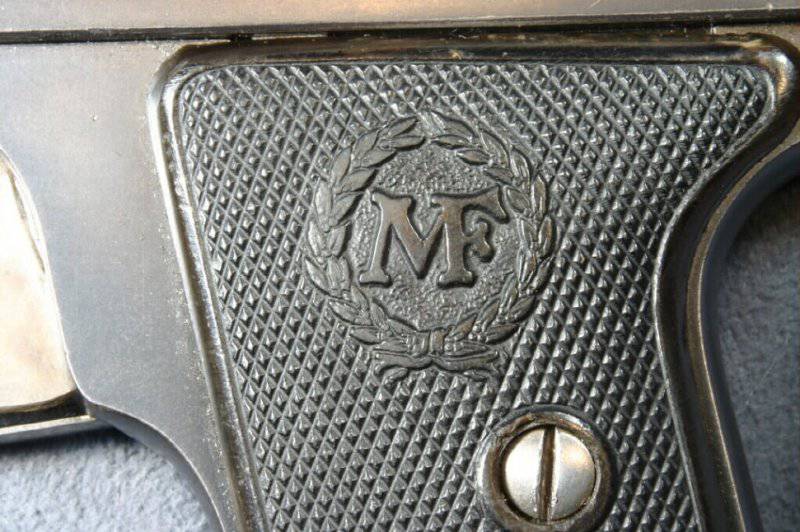 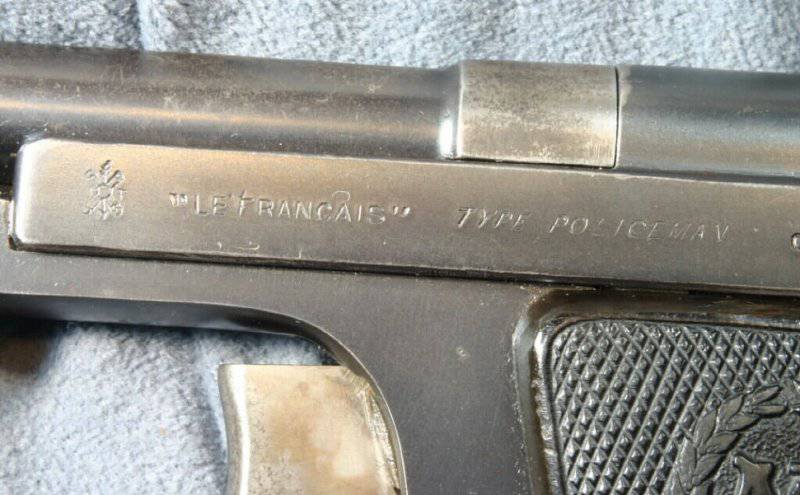 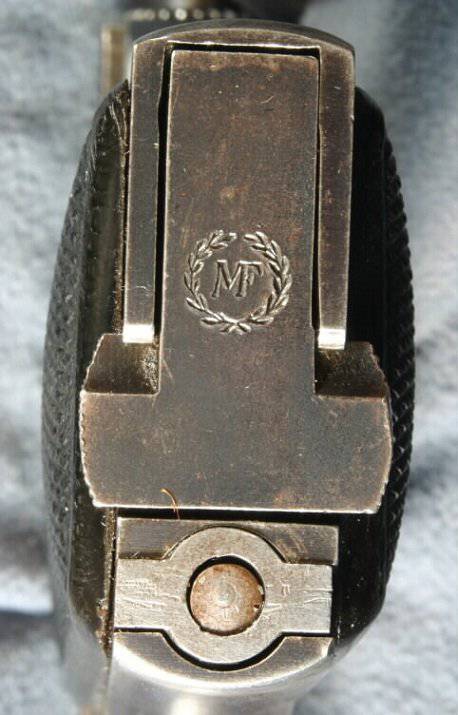 On the side surface of the pistol frame there is a characteristic marking: “Le Fran? Ais Type Policeman”; on the handle is an abbreviation “MF”.
The “police gun” was officially put into service by the gendarmerie (which is why it is sometimes called “le zhendarm”) and the city police, and it was especially liked by the officers of the criminal police. In the literature there is information that the gun was also used by the staff of the National Forestry Department of France. Since the caliber 6.35 mm does not quite match the purpose for the forces of law and order, from about the end of 20, this weapon was produced and the caliber 7.65 mm under the Browning cartridge. The barrel of this gun had several grooves for cooling. 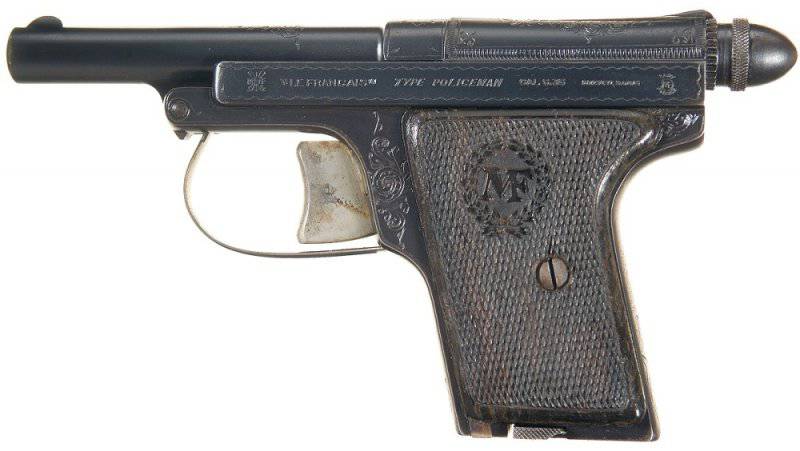 The “Policeman” model was produced mainly with the standard finish No. 826 (bluing, plastic handles), but there were other models: No. 832 Modele ameliore (reinforced), No. XXUMX Luxury Model and No. XXUMX Grand Luxe. 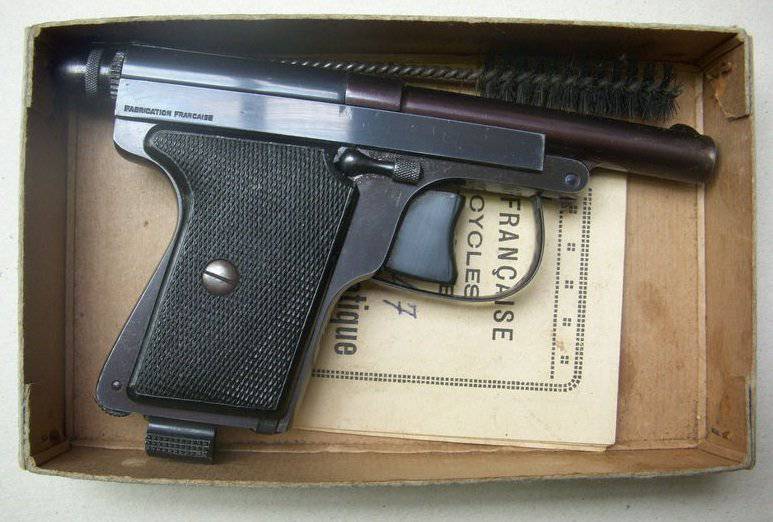 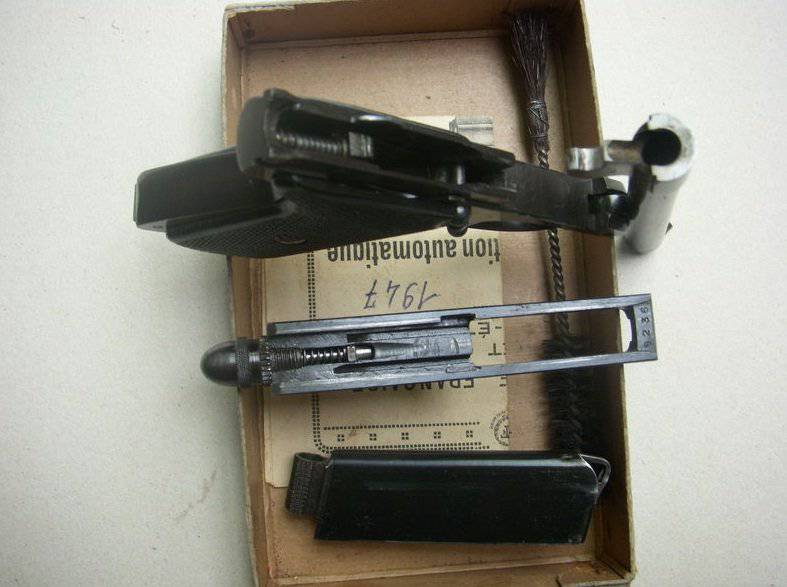 The “Policeman” pistol (Le Fran? Ais Type Policeman) was quite a success and was produced after both World Wars, until the end of the 60s. 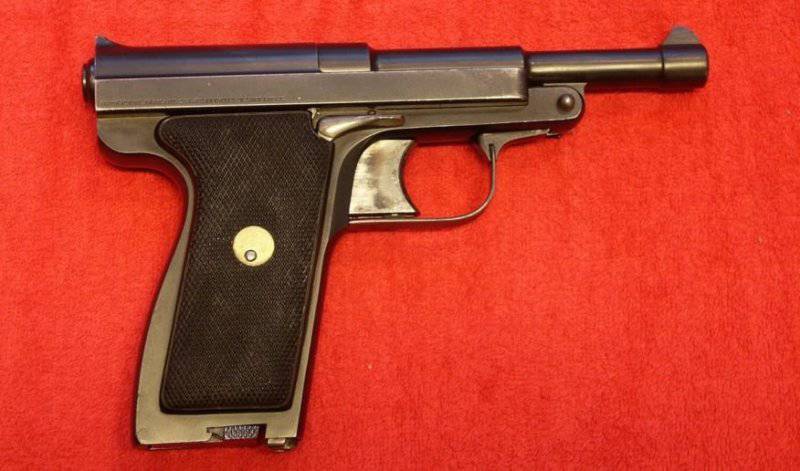 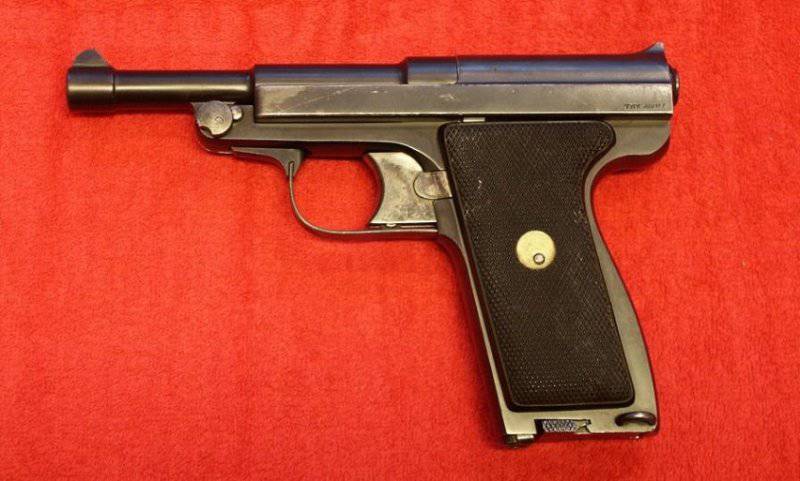 In 1928, the most powerful and largest pistol of the Le Fran family was: Le Francais’s “Army” pistol (Le Fransais Type Armee) chambered for 9 mm “Browning long” (9 × 20 Browning SR). The barrel of a 9 caliber mm has numerous grooves for cooling.

The cheeks of the pistol were made of black plastic and fastened to the handle with screws. The pistol on the cheeks did not always bear the abbreviation of the manufacturer. 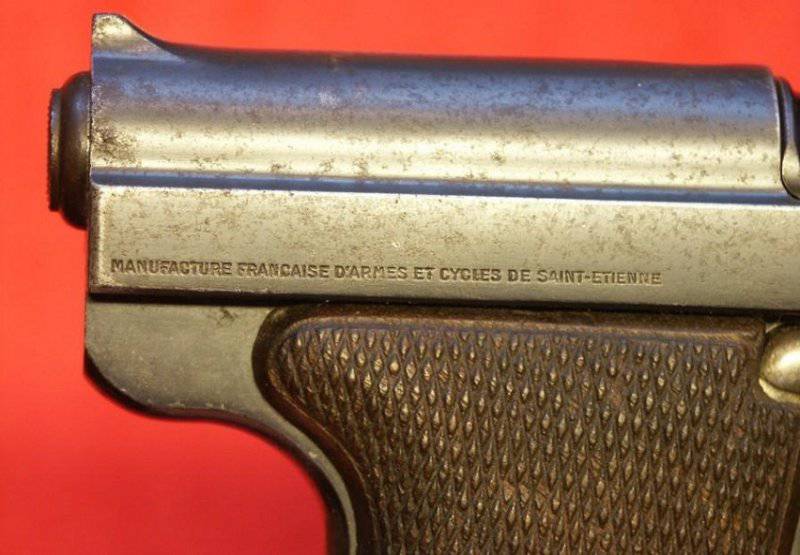 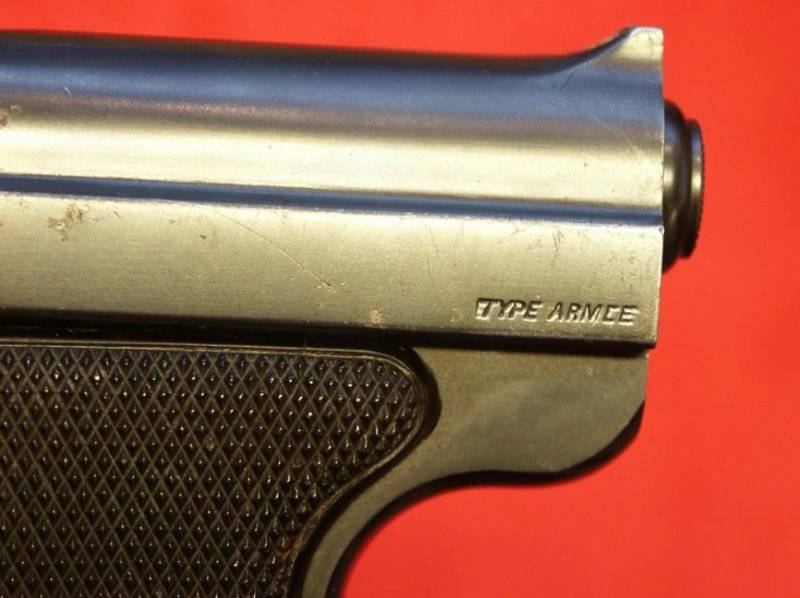 The gun was created in the hope that it will be accepted by the army, however, despite the fact that the French army still purchased a small batch of pistols, but the weapon was not accepted due to insufficient penetration. In addition, the practical rate of fire of the weapon was low. The effort that had to be applied to the trigger for firing a shot, and the free running of the trigger, were not entirely in accordance with the requirements and were respectively 4 kg and 7mm, which affected the accuracy of shooting. The pistol was used as an additional personal weapon by military officers. 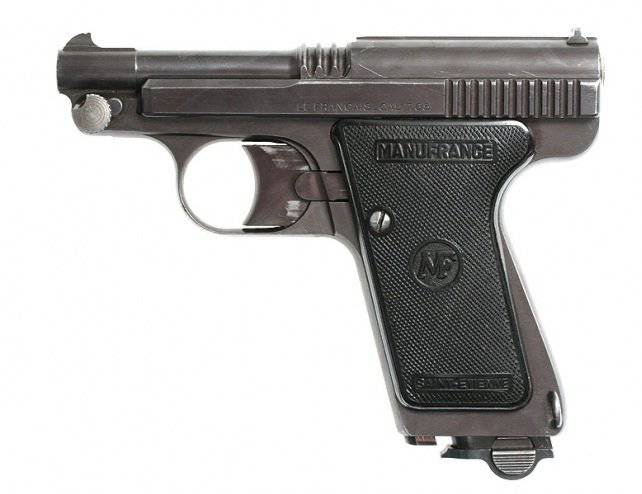 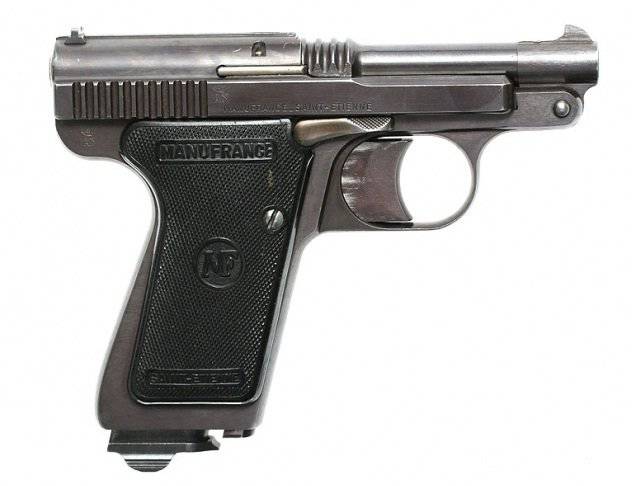 After the Second World War, the 9mm army pistol was no longer produced, and in 1950, Manufrance released the Le Français (Le Francaise) version of the pistol chambered for 7.65mm Browning (7.65X17mm Browning SR). 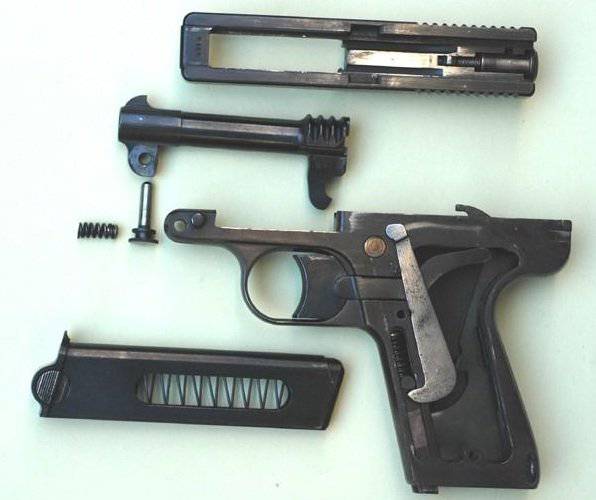 This gun has already had the opportunity to reload the weapon by retracting the bolt, which in this model had a notch for easy hold. The pistol had an external extractor for extracting the non-shot cartridge. The release of this version of the gun lasted almost until the end of the 60-ies of the twentieth century.