Foreign bases: the wishes of Russia and the opinion of foreign countries 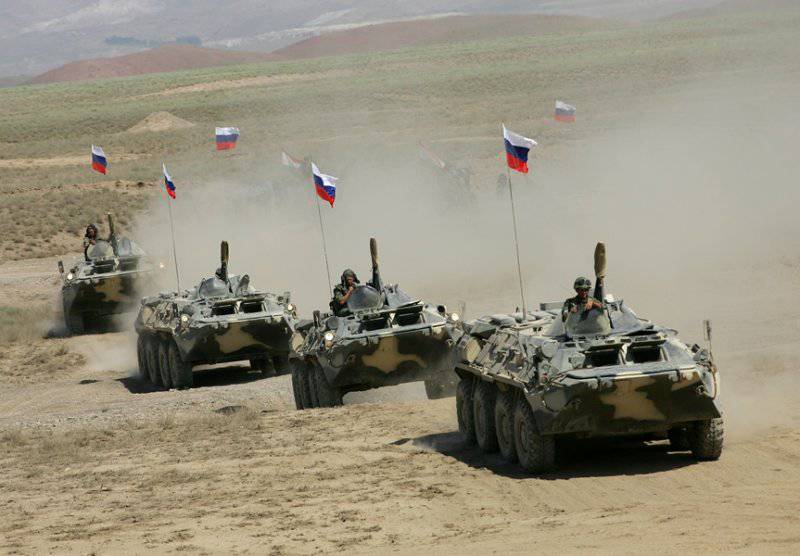 In late February, the leadership of the Russian Ministry of Defense announced new details of their plans for cooperation with foreign countries. The Russian military intend to complete negotiations with their foreign counterparts and sign several agreements on the establishment of military bases.

As Defense Minister S. Shoigu said, in the foreseeable future, new Russian military bases may appear not only in Cuba and in Vietnam, but also in a number of other countries. Negotiations are underway with Venezuela, Nicaragua, Seychelles, Singapore and other states in different regions of the planet. The Minister stressed that some negotiations will soon lead to the signing of contracts. In addition, the head of the military department noted that a number of other agreements are expected to be signed, according to which the order of entry of ships into the ports of the partner countries will be simplified, and long-range bombers will be able to refuel at their aerodromes.

Currently, Russia has several military bases in foreign countries. It should be noted that almost all such objects are located in the post-Soviet space. The only exception is the Navy's Logistics Support Point (MTO) in the Syrian port of Tartus. Thus, almost all available foreign bases of the Russian armed forces provide for the actions of various troops only at a small distance from the country's borders. The MTO point in Tartus, in turn, allows the ships of the Russian Navy fleet act in the Mediterranean.

For a long time, the Soviet Union had a wide network of foreign bases, which allowed troops to operate at a great distance from the borders. However, as a result of the political and economic problems of the last decades, almost all such objects ceased to exist. Outside the borders of the former Soviet Union, there remained only a logistics point in Syria.

Building new military bases or recreating previously closed ones will allow the navy and the Russian air force to operate in remote areas and thereby increase the combat capability of the armed forces as a whole. Thus, the restoration of the base in Vietnam (Cam Ranh) will allow the fleet and the Air Force to be active in the Pacific region. Cuban facilities will allow you to control important areas off the coast of North and Central America, as well as facilitate the work in the northern Atlantic Ocean. The deployment of bases in Venezuela and Nicaragua will provide an opportunity to strengthen the presence in the western hemisphere of the planet. Seychelles and Singapore are able to become the most important outposts of the Russian armed forces in the Indian Ocean.

The plans of the Russian Ministry of Defense for the establishment of foreign military bases look quite bold, but their implementation can be associated with some difficulties. In the autumn of last year, there were reasons to assume that the base of the Russian Navy could again begin work in the Vietnamese city of Cam Ranh. A prerequisite for such assumptions was another agreement between Russia and Vietnam on military-technical cooperation. The two countries are jointly planning to build a base for the maintenance and repair of submarines. According to official information, this object is intended only for the Vietnamese naval forces, but already now there are suggestions of a different kind. It is quite possible that in the future, Moscow and Hanoi will agree to resume the work of the Russian military base on Vietnamese territory.

The situation with Russian-Vietnamese cooperation looks quite positive, but the implementation of other plans of the Russian Defense Ministry may be associated with serious problems. Thus, on the last day of February, the Minister of Foreign Affairs of Venezuela, Elias Haua, voiced the position of official Caracas regarding the deployment of Russian military bases. The Venezuelan Constitution does not allow the deployment of military bases of third countries in the country. For this reason, Venezuelan leaders will not be able to sign the corresponding agreement with the Russian military.

Similarly, the position of Nicaragua. At the end of February, Wilfredo Navarro, deputy head of parliament from the opposition Liberal Constitutional Party, also referred to the constitution of his country. He recalled that the main law does not allow foreign military bases to be located in Nicaraguan territory. At the same time, Navarro noted that the official Managua can give permission for the transit and stopping of foreign warships and aircraft for humanitarian or training purposes. However, this requires an appropriate congressional decision. A few days later, Nicaragua’s Vice President Omar Alleslevens confirmed the words of V. Navarro.

The position of Venezuela and Nicaragua is simple and clear. The authorities of these countries are not going to violate their own constitution and for this reason they do not intend to allow the construction of foreign military bases on their territory. Nevertheless, Caracas and Managua are unlikely to refuse to further military and military-technical cooperation with Russia. Currently, several contracts are being executed between these Latin American countries and Russia. In addition, countries have long-lasting positive relations: for example, Venezuela warmly received Russian warships and strategic bombers several times.

It is noteworthy that in recent months, official Caracas has been trying to expand cooperation with Russia and China. Apparently, the new leadership of Venezuela is trying to find reliable and strong allies. At the same time, attempts are being made to improve relations with the United States, damaged under the previous president, W. Chavez. At the same time, the purchase of numerous armaments and military equipment of Russian manufacture strongly influences the further selection of a partner in military-technical cooperation.

Official Managua is also interested in cooperation and support from a developed state. One of the reasons for this is the most daring Nicaraguan project for the whole history of the state. The authorities of this country intend to build a new shipping channel that will connect the Atlantic and Pacific oceans. Construction work will begin this year, and the first ships will be able to follow a new path until the end of this decade. According to reports, most of the financing of the work took China. In addition to the channel, it is planned to build seaports, an airport and a number of other infrastructure facilities.

It is not difficult to guess that the new Nicaraguan channel will be able to change the routes of sea freight. The emergence of a new sea route can seriously hit shipments through the Panama Canal. In addition, it is known that China has already received a concession for the operation of the channel in Nicaragua, and such a feature of the project simply cannot remain without specific geopolitical consequences. Thus, Nicaragua may need to cooperate with major developed countries.

The Constitutions of Venezuela and Nicaragua will not allow military bases of Russia or any other foreign state to be located on their territories. However, at present, the state of the Russian armed forces is such that they do not need large permanent bases abroad. At the same time, international agreements may be useful for the Russian Navy or Air Force, according to which the procedure for accepting our ships and airplanes will be simplified. Such agreements will not contradict the legislation of Latin American countries, but will be able to positively affect their relations with Russia.

Over the past few months, the use of Russian military facilities in Cyprus has been actively discussed. According to some data, in the near future an agreement should be signed, according to which the Russian armed forces will be able to use the Andreas Papandreou air base (the city of Paphos) and the port of Limassol. It is noted that the airport of Paphos will be able to take only aircraft that take part in rescue or humanitarian operations. Official confirmation of this information has not yet been reported.

The possible signing of the Russian-Cypriot treaty for the first time became known last summer. During the meeting of the heads of the ministries of foreign affairs of the two countries, S. Lavrov said that Russia was interested in leasing the Andreas Panandreu airbase. After that, for several months, specialists and politicians discussed the possible consequences of signing a contract on such a lease. Cooperation with Russia is beneficial for Cyprus, but may lead to a cooling of relations with other countries. Official Nicosia said that the final decision on the lease or sharing of Cypriot properties will be made in accordance with the public interest. Discussions on this issue are still ongoing and the final decision has not yet been made.

Nevertheless, the ships of the Russian Navy in recent years regularly call at the port of Limassol to replenish stocks of fuel and food. This means that the Russian Navy actually already has a second logistics point in the Mediterranean. It should be noted that the possibility of this improvised item is much less than that of a similar object in the Syrian Tartus.

Of particular interest are the statements of S. Shoigu on negotiations with the Seychelles and Singapore. Russia and the Soviet Union had not previously cooperated with these countries in the military sphere. For this reason, the possibility of the appearance of contracts with them causes a certain interest. However, in this case the question of the deployment of Russian military bases does not have a clear answer. Official Victoria and Singapore have not yet commented on the words of the Russian Ministry of Defense about the possible creation of bases in their territory.

Most likely, while we are not talking about the creation of full-fledged bases in the Indian Ocean. The capabilities of the Russian Navy do not yet allow the grouping of ships and auxiliary ships to be kept permanently in the Indian Ocean. Therefore, in the case of the Seychelles and Singapore, it will be enough only to have an agreement on the simplification of the entry of Russian ships into their ports and the replenishment of stocks. In the future, the development of such cooperation is possible, but this should be considered a matter of a rather distant future.

The current situation with the statements of the head of the Russian military department and the comments of foreign countries allows us to make some assumptions about the process of creating new military bases in third countries. Apparently, in the foreseeable future, cooperation agreements may be signed, according to which Russian warships and airplanes will be able to use foreign ports and airfields in a simplified manner. In the future, international cooperation may lead to the emergence of full logistics points.

As for large foreign bases like the one that was in the Vietnamese city Camran, Russia does not need them yet. For example, the number of warships of the Navy so far does not allow for permanent duty in remote regions of the planet, for which not just the logistics center, but a full-fledged base will be needed.

Time will show how exactly further cooperation between Russia and foreign countries in the field of creating logistics and logistics centers and bases will develop. In the meantime, it remains only to assess the possibilities and prospects of cooperation with a particular country. The potential locations for Russian bases, called Defense Minister S. Shoigu, look interesting and useful for the domestic armed forces. However, the final decision on the deployment of bases in foreign countries remains with their leadership.