And let the United States go ... to the UN court 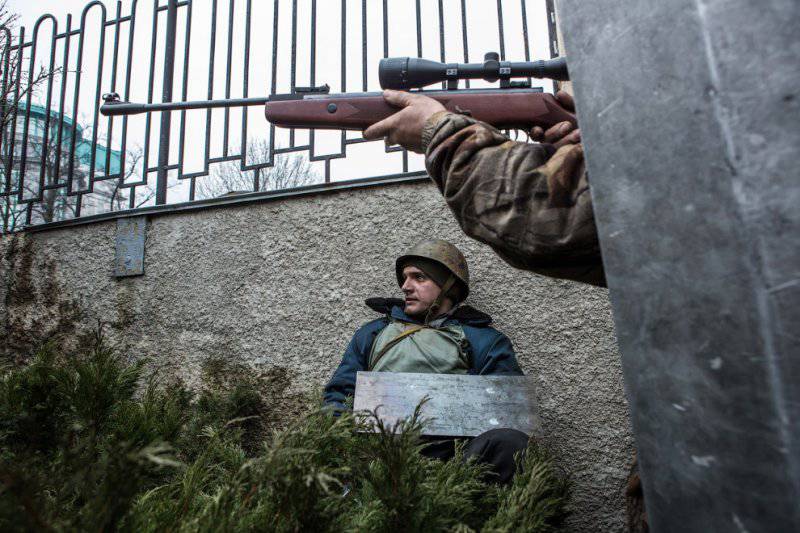 Alexander Yakimenko, the former head of the Ukrainian Security Service of Ukraine, who arrived (or, more correctly, escaped) from Kiev to Moscow, told the Vesti correspondent that the mercenaries were shot from the Philharmonic building that had captured the Maidan’s Self-Defense, and the leader of the Maidan, MP Andrei, led the Maidan. Paruby ...

Now we know the name of the Maidan killer, which was talked about during a telephone conversation with Catherine Ashton, Estonian Foreign Minister Paet, and expressed concern that “the people are becoming more alert that the new coalition does not want to investigate the exact circumstances of the incident. There is a rapidly growing understanding that behind these snipers there was not Yanukovych, but behind them was someone from the new coalition. ” Indeed, instead of investigating the bloody shooting, for this crime, the Bandera Kiev authorities appointed Paruby secretary of the Security Council of Ukraine.

Yakimenko also said that the United States Embassy in Kiev makes all appointments in the Provisional Government, and Yatsenyuk as Prime Minister made, as we remember, V. Nuland, in a telephone conversation with his ambassador Payette.

That is, the United States, in fact, captured Ukraine, putting in power its puppets, but not yet entrenched. Their ultimate goal is to establish complete domination in Ukraine, they “need Ukraine, which will do what they consider necessary,” Yakimenko concluded his statement.

Today it is already clear that the States are conducting in Ukraine a special operation similar to the one that they conducted in Georgia named after Saakashvili. They have been preparing for it since the time of Yushchenko, a lot of work has been done on introducing American specialists "for the development of civil society" to Ukraine. Today, the final stage has come, but it began with a false start, after the failure of the Euro-Association of Ukraine, and the Americans had to perform a coup, and brown, neo-Nazi, with pogroms. This is noted by Putin, so this special operation was not for him. news.

But what is the meanness of the idea: to turn Ukraine into an analogue of Saakashvilevskaya Georgia, but Bandera, and use it as a ram against Russia! Here the mighty mind of US Vice President J. Biden is felt: Saakashvili also came to power through the orange coup, and this was also his project. Biden that Georgia, Ukraine - everything is one. However, Ukraine is not Georgia, but Eastern Ukraine is Little Russia at all, and on this Washington has already stumbled with the “Euro-association” of Ukraine.

In fact, Uncle Sam begins preparations for an attack on Russia, as an ultimatum there is a demand to recognize the Bandera government in Kiev, that is, to put up with the seizure of an offensive Ukrainian springboard. But Russia managed to get the Crimea out of the invaders ’place: the Russian spring flourished on the peninsula, it will end in a referendum, and the will of the people of Crimea expressed on it will have to be considered all. From a military point of view, the Crimea is this unsinkable strategic Black Sea aircraft carrier, which calls into question all the achievements of the Americans in Ukraine.

Therefore, the United States is so keenly responding to the Crimean referendum, threatening not to recognize its results, and frighten Russia with sanctions. Well, sanctions are a two-edged thing, it is not known who will be luckier here. The anti-American sentiments in the world are strong enough, and Russia can strengthen them even more, so the dollar, the main military force of Washington, may well not be good enough.

And by the way, there is a democratic solution of the disputed Crimean issue. The United States may contact the UN International Court of Justice, which recently, in 2008, considered the Kosovo issue, which is similar to the Crimean one. Nothing prevents Russia from appealing to this high court over the Crimea.

Former US Secretary of Defense Robert Gates gave the following description to Biden: “I think he was wrong on almost all issues of foreign policy and national security during the past four decades. I think Biden subjected Obama to Chinese water torture every day, saying: "The military cannot be trusted." Thus, thanks to Biden, Russia has a chance to lose Galicia from the body of Ukraine-Ukraine, and let it go to Europe.

In Ukraine, we play in our field, unlike Georgia. Robert Gates commented recently that the United States was late with the Crimea. Biden can't understand this, but maybe Obama will understand this?

Ctrl Enter
Noticed oshЫbku Highlight text and press. Ctrl + Enter
We are
Situational analysis of the death of the MH17 flight (Malaysian Boeing 777), made on the basis of engineering analysis from 15.08.2014Memo to mercenaries in Africa
Military Reviewin Yandex News
Military Reviewin Google News
51 comment
Information
Dear reader, to leave comments on the publication, you must sign in.