March 14 2014
107
13 March 2014, the cutoff body of Ukrainian politics called the Verkhovna Rada, decides on the creation of the National Guard. According to the secretary of the National Security and Defense Council, Andriy Parubiy, the National Guard of Ukraine (NSU) will soon be composed of fighters from the Internal Troops. The main agency with which the NSU will be subordinate is the Ministry of Internal Affairs.


One of those Ukrainian politicians who spoke for the first time about the need to create the National Guard was Mr. Turchinov, trying on the duties of an illegitimate Speaker of the Rada and part-time - an illegitimate acting president. From Turchinov’s speech explaining that the current Ukraine NG is simply needed “like air”:

The National Guard will be created to protect the country and citizens about any criminals from external and internal aggression.

Guided by the norms of international law, one would assume that, in the first place, the created NSU would have to do away with those criminals who seized state power in the country a few weeks ago, with those who are today arranging torchous nationalities and speaking at rallies calls to shoot the Russian population of Ukraine. However, international law, as it turned out, in no way extends to today's "official" Kiev, and therefore the National Guard, Mr. Turchinov and his associates, is clearly created for other purposes. If you really wanted to protect the constitutional order (although those who, after having trampled it, seized the power, can observe and protect the constitutional order), they would not disband Berkut ...

If we take into account the fact that just a few days ago, the so-called “Prime Minister” of Ukraine Yatsenyuk dismissed three deputy defense ministers at once, who disagreed with the satisfaction of the militants from the Right Sector organization to join the Armed Forces of Ukraine, suppose that the National Guard being created will become the militarized body where ultranationalists will be able to enter without problems. It turns out that a kind of beautiful sign is being created for the full-scale legalization of radical groups calling for the accomplishment of terrorist acts as part of the "guerrilla" war. 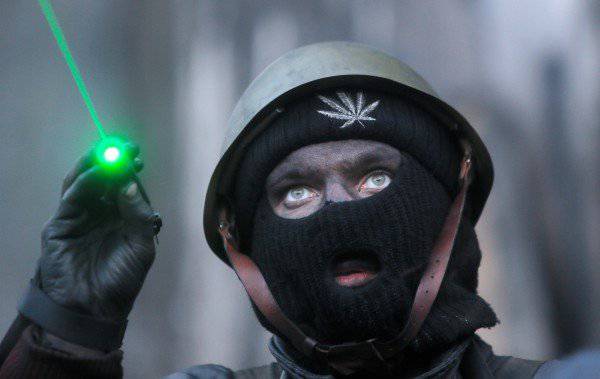 According to the announcements of representatives of the self-proclaimed Ukrainian authorities, the created National Guard will have at least 20 thousand "bayonets".

Let us try to deal with the question of exactly what tasks the units of the NSU will perform and to whom these units will actually obey?

First you need to note the nuance associated with the fact that such a "phenomenon" as the National Guard in Ukraine already existed. The time period during which the National Guard conducted its activities in this country: from November 1991 to January 2000.

From the list of the main tasks of the “old” National Guard:

1. Protection of the constitutional system of Ukraine, the integrity of its territories from attempts to change them by force;
2. Participation in the elimination of accidents, disasters and natural disasters;
3. The formation during the emergency period of parts for the protection and defense of the most important public facilities;
4. Help PWU (border troops of Ukraine) in the detention of violators of the state border.
5. Participation in hostilities to repel attacks from the outside and protect the security of the country.

The divisions of the “old” National Guard were stationed in the cities: Kiev, Kharkov, Odessa, Donetsk and Donetsk region, Lviv, Simferopol.

Separate regiments of the NSU were stationed in addition to some of the specified settlements and territories in Dnepropetrovsk, Krivoy Rog, Lugansk, Nikolaev, Sevastopol, and Pavlodar.

It is worth noting that the NSU of the 1991-2000 model was subordinated directly to the President of Ukraine and was guided by the fundamental law of the state - the Constitution. Given that there is neither a legitimate president nor a working Constitution in Ukraine, it can be assumed that the powers of the “new” National Guard will, to put it mildly, be blurred. It is very likely that this will be a “hodgepodge”, at the head of which separate divisions they will place leaders of radical nationalists who can “protect” “new values”. It is unlikely that the well-known Dmitriy Yarosh will be at the head of the National Guard because of the fact that this gentleman had a far more significant political ambitions - up to the presidential. But the rabble of Yaroshevsky "sergeants" may well be at the helm of a new "symbol of law and order" of Ukraine. By the way, in this regard, the term “Law enforcement agencies” for Ukraine acquires a special meaning ...

Returning to the tasks of the NSU 1991-2000, you understand that the first task is somehow weakly (to put it mildly, weakly) joining the “army” that the same Turchinov is going to form in the form of the National Guard today. Speech about the “protection of the constitutional order” of Ukraine ... If one of the current Ukrainian pseudo-authorities declares publicly that the National Guard men are tasked with protecting the constitutional order, then the world has not seen such bitter joke for a long time. Protect what, sorry? ..

So, the “westerners”, who, sending NATO bombers to peaceful cities, “hokhmili”, declared that there they would establish a democratic order and build a peaceful life ... Kiev “power” seems to be going along the same path. And the way is utterly simple: to collect all that neo-fascist trash that literally turns inside out of hatred for everything “non-Ukrainian”, arm these thugs, put them on the state allowance (as they say, dumb, but they will help them abroad). this is "guards and force the guards to serve the new" authorities "...

That's just Turchinov, Yatsenyuk, and many other representatives of the current Kiev, it seems, poorly understand who they are going to deal with. The “Right Sector” wants to get a favor from those who, on its strength, snuck into power. Debt in the form of an ad militants just as the guardsmen "power" is ready to give. But this will definitely not be enough for the “Guardsmen” from today's “cohort” of Mr. Yarosh. If Yarosh loses the event in May, what Kiev today calls the “presidential election” (and that Yarosh’s “candidate ”’s future loss is a fact, as even the American sponsors of the Ukrainian coups are not ready to put a person at the head of Ukraine with his reputation and calls), then the "guards" smash into pieces Yatsenyuk cabinet together with Yatsenyuk themselves. Those who are so happy today for the creation of the NSU, from Avakov and Turchinov to Parubiya and others, will also fall under the hot hand.

PS 19 of March of this year Vasu (the Supreme Administrative Court of Ukraine) will consider the lawsuit of Donetsk lawyer Vladimir Olentsevich about the legitimacy of the current Verkhovna Rada and the legality of the appointment of Turchinov, acting president. It seems that under the pressure that the new “authorities” exert on the judicial authorities (as is known, the dismissal of the judges of the Constitutional Court followed in late February), the Supreme Arbitration Court of Ukraine will of course decide on “legitimacy” - otherwise, as one “Maidanian master” said : a bullet in the head - and in the ravine ...

Ukraine, where are you rushing to? ..

Ctrl Enter
Noticed oshЫbku Highlight text and press. Ctrl + Enter
We are
Prime passion. Who will replace Yatsenyuk as prime minister of Ukraine?Results of the week. “Bonjour to you in your hut”
Military Reviewin Yandex News
Military Reviewin Google News
107 comments
Information
Dear reader, to leave comments on the publication, you must sign in.