China's foreign policy intentions regarding the island of Taiwan 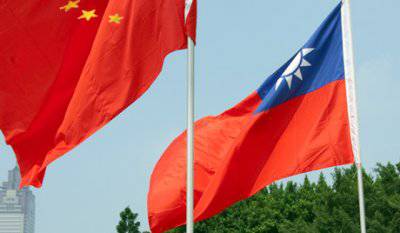 
The head of the NFF, Su Tsen-Chan, who is also the chairman of the Democratic Progressive Party, 4 March published a new study in the Defense Policy Blue Papers series, which includes the NFF's work on defense issues. It was called the “Military Threats to the Republic of China from the PRC before 2025” and became the fifth in the aforementioned series. It was the first to provide a multilateral analysis of the modernization trends of the People’s Liberation Army of China (PLA) and programs aimed at ensuring successful warfare to seize the island of Taiwan. Experts believe that the four documents previously published in this series did not differ in the quality and depth of analysis.

The head of the NFF Advisory Committee, York Chen, drafted and edited the document. According to him, this report is a more balanced point of view on the PLA, in the formation of which was attended by former officers of the armed forces of Kazakhstan, American analysts, report writers of the defense department of the Republic of China.

According to the document, Kazakhstan should increase its defense budget to 3 percent of GDP and rely more on the local manufacturer of weapons and equipment. The authors of the report identified three main priorities for national defense in the near future - protection against cybernetic threats, improving air defense capabilities, and local production of submarines.

In the sphere of cyber defense, it was proposed to raise the status of the command of information and cybernetic combat operations of the defense ministry of RK. It is also supposed to recruit new specialists of this profile, to develop an asymmetric concept of conducting cybernetic operations and equipment, to strengthen the position of the department in this area.

The drafters of the report recommended as soon as possible to implement a two-stage construction program, which will preserve the integrity of the underwater fleet Naval Forces of the Republic of Kazakhstan and begin the long processes of developing a submarine project, the acquisition of necessary equipment, testing and modernization. York noted that, in his opinion, the best method for implementing this program is to redesign two Dutch submarines of the Zwaardvis class sold to Kazakhstan in the 1980s. In 2001 The United States offered the Republic of China to purchase eight diesel-electric submarines (DEPLs), but failed to develop the appropriate infrastructure.

“Submarines are the main means of deterring the PLA Navy from crossing the Taiwan Strait. Thus, the only opportunity for Kazakhstan to get submarines is their own production, ”the report says. Over the past ten years, the Republic of Kazakhstan has repeatedly tried to build independently submarines, including the program "Hidden Dragon" and the IDSP (Indigenous Defense Submarine Program), which the Navy of the country could not fulfill.

At the same time, experts say, China's air power is growing. The production of more advanced 4th generation fighters continues to increase, two types of 5th generation stealth fighters were demonstrated, obsolete ballistic missiles are replaced by more accurate ones, and the deployment of advanced cruise missiles for ground-based attacks continues. For this reason, the authors of the report believe, the Republic of Kazakhstan should purchase combat unmanned aerial vehicles (UAVs), modernize Aviationimprove high precision weapon, to develop a new generation of fighters, including vertical or short takeoff and landing.

Some time ago, RK expressed interest in acquiring AV-8 Harrier, a thorough-repaired vertical take-off and landing aircraft. Its representatives attended meetings of the United States Department of Defense dedicated to the F-35B Lightning II F-2B fighter program for short takeoff and vertical landing.

The Chunshan Institute of Science and Technology produces several different UAVs and has groundwork for unobtrusive UAVs, but for a long time it has had problems with funding and lack of support from the military, who are in favor of acquiring American UAVs.

However, despite the recommendations contained in the aforementioned report, the overall conclusions of the document are negative.

According to experts, the PLA had the opportunity to conduct combat operations against the RK Defense Forces in 2007, surpassed the RK army in quality and quantity in 2010, and continues to work on achieving decisive superiority in full-scale operations on Taiwan to 2020. At the moment, the de facto identification of the air defense zone of the People's Republic of China includes part of the airspace of the Republic of Kazakhstan, and when the 2020 generation fighters will be put into service by 5, the PLA Air Force will have a decisive superiority over the Republic of China, ”the report says.