Ukrainian fleet is forced to seek a new place of deployment 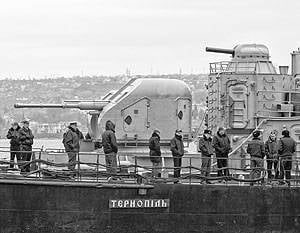 Ukraine has lost at least half the payroll of its Navy, according to the Crimea. In addition, the first, so far officially refuted reports appeared that the Ukrainian navy was being relocated to Odessa. However, experts say the new Ukrainian base fleet may end up in a completely different city.


On Wednesday, a source in the Ministry of Defense of Ukraine told Interfax that the naval base in Odessa in April will be the main one for the Ukrainian Navy. This decision was allegedly already made, and the sailors, "who remained loyal to the oath", after leaving the Crimea, will continue to serve in Odessa. According to representatives of the department, the seaport of Odessa has the necessary infrastructure for basing the Navy. In addition, in the fall, on the basis of the Odessa National Maritime Academy, it is planned to open a naval faculty to prepare future personnel for the Navy.

The fact that the main base of the Ukrainian Navy can be transferred to Odessa, the newspaper "Duma" was previously told by Rear Admiral Dmitry Ukrainets. According to him, the city has a suitable infrastructure. In addition, individual ships and units can be deployed in the city of Ochakovo (the Ukrainian fleet is also based in Izmail, Donuzlav, Balaklava, Chernomorsk, Novoozernoye, Nikolaev, Evpatoria and Feodosia).

“They (the Black Sea Fleet of Russia) are blocking our ships at the Sevastopol and Southern bases, starving the teams, clearly setting themselves the task of depriving the country of naval forces. But we have no other ships! The option to break through with the battle has already disappeared - this is suicide. Negotiations remain, a weighty argument in which Ukraine’s entry into NATO may be the soonest possible, ”said Ukrainian.

Located on the northwestern coast of the Black Sea, in the southwestern part of the Gulf of Odessa, the seaport is considered one of the largest passenger terminals in Europe (the third in terms of cargo turnover on the Black Sea). NATO warships made friendly visits to the port several times.

Now in the roads of Odessa is the flagship of the Ukrainian Navy - the frigate "Hetman Sagaidachny." In addition, against the background of recent events, 12 ships and boats of the Yalta and Sevastopol naval guard detachments were redeployed there. In turn, the Kerch group of ships was redeployed to the city of Berdyansk, and the ships Slavutych and Ternopil continue to be in the bay of Sevastopol. The headquarters of the Navy was blocked by the self-defense units of the Crimea.

The Ukrainian Navy was formed in 1992 on the basis of the forces of the Black Sea Fleet. Today they number about 14 thousand people. They include more than 17 warships and about 20 support vessels and boats, about 30 planes and helicopters, about 40 tanks, more than 90 infantry fighting vehicles, about 190 armored personnel carriers and more than 60 artillery systems and mortars.

Responsibilities of the commander of the Ukrainian Navy are performed by Rear Admiral Sergei Haiduk. He replaced on this post Denis Berezovsky, who in early March, swore allegiance to the Crimean people.

Meanwhile, the Ministry of Defense of Ukraine denied reports of plans for a base in Odessa. “For the first time in the Ministry of Defense and the General Staff of the Armed Forces of Ukraine they hear about it. There is no such decision, such an issue has not been raised or discussed, ”reports Correspondent with reference to the comment of the Acting Head of the Press and Information Department of the Defense Ministry Bogdan Senik.

In 1940, a naval base was established in Odessa (it was a deterrent in disrupting the German offensive and preventing invasion from the sea). In 1960, it was disbanded. In January last year, it was reported on the establishment in Odessa of the management of the division of river ships of the Navy and plans to deploy in the Practical Harbor of the Western Naval Base of the Navy a division of river ships of the Navy. At the same time, it was emphasized that such a division would become a unique part: there used to be no river forces in the Armed Forces of Ukraine, it will be designed to serve on border rivers, lakes, estuaries, as well as external raids and coastal waters.

Last year, it was reported about plans to introduce into its structure the first two armored artillery boats of the Gyurza-M project, laid down in October 2012 at the Leninskaya Kuznitsa plant in Kiev, and begin training crews. And in 2014, the military planned to complete the formation of the division. In 2013, measures were taken at the Western Naval Base to fully supply the riverboat division with uniforms, food and cash.

Director of the Ukrainian Institute for Political Analysis and International Studies Sergey Tolstov doubts that the Odessa Naval Base will receive the status of the main one. “There were no preliminary decisions related to this. Therefore, it’s difficult to talk about how Odessa base can become an alternative, ”Tolstov told VIEW.

At the same time, he believes that in terms of infrastructure, the base in Nikolaev is the most ideal, “where there are any facilities that correspond to what is in the Crimea”. We will remind, Nikolaev first of all was famous for shipbuilding (now it is the Black Sea shipbuilding plant, Plant of a name of 61 of the communard and Okean plant).

However, Tolstov is sure that, as such, there is no need to transfer the fleet to a new location. “If the law does not work, then everything is possible. If the law is valid, the ships of the Ukrainian Navy in Balaclava and the Bay of Sevastopol are Ukrainian property. That is, they must either be captured, which will be an act of war, or shot down. As I understand, the personnel of the ships of Ukraine is not going to raise the white flag and does not conduct official negotiations on transferring them into the ownership of any other state entity, ”the expert believes.

Note that on Tuesday, the Prime Minister of Crimea Sergey Aksenov announced his intention to nationalize the fleet of the Ukrainian Navy. “We are not going to release their ships anywhere. We have closed the exit to Chernomorneftegaz’s fleet, ”he said.

An informed source in the Crimean government on Wednesday told RIA "News”That the naval forces of Ukraine have lost control of at least half of their shipboard personnel and virtually the entire infrastructure of Sevastopol. “If they are built, the Crimea’s self-defense forces of Crimea can count on the Lutsk and Ternopil corvettes, the Slavutych command ship, small anti-submarine ships and rocket boats, sea-sweepers, and the only Ukrainian submarine Zaporozhye, which did not leave Sevastopol, ”said the source.

At the same time, he recalled that part of the Getman Sagaidachny crew went ashore, returned to the Crimea and went over to the side of the autonomy authorities. According to him, the command of the Crimean naval self-defense forces is counting on an extensive fleet based system in Sevastopol, as well as on the naval Aviation (Belbek airport), coastal units and training ranges on land and at sea.

In turn, Konstantin Sivkov, First Vice-President of the Academy of Geopolitical Problems, is convinced that if Sevastopol becomes a Russian city and the countries do not sign an agreement on the basing of ships, then part of the Ukrainian fleet there will in any case have to find a new place for basing. “But the essence is different. Why Odessa, whose population is in favor of an active rapprochement with Russia, is suddenly so reoriented. This indicates only one thing: the situation in Ukraine is entering an even more acute phase, ”Sivkov told the newspaper LOOK.