Romania opened its mouth to Ukraine 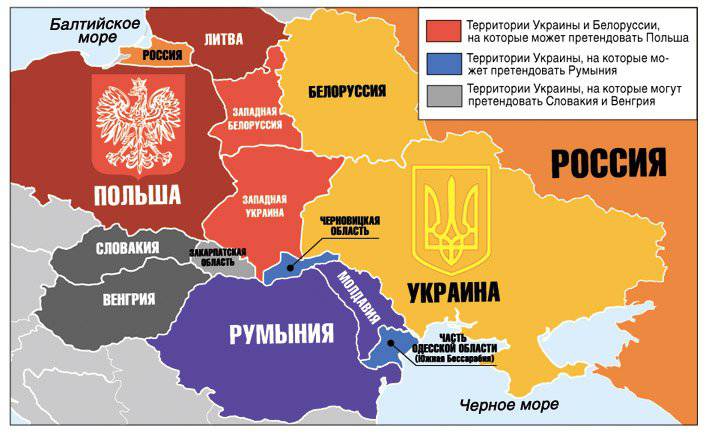 The main "Romanian-Ukrainian" news The last days are: 10 March in negotiations and. about. Ukrainian Foreign Minister Andrei Deschitsa signed a bilateral agreement on confidence and security building with Romanian Foreign Minister Titus Korlecian; Romanian Armed Forces decided to conduct an unscheduled tactical exercise in the territory of South Bukovina on March 16; 12 March US, Romania and Bulgaria began exercises in the Black Sea; In parallel, the General Staff of the Romanian Armed Forces developed a plan for the protection of the Romanian national minority in Bukovina and in the Odessa region, and the Senate of Romania agreed with the president on the deployment of troops to Ukraine; Finally, Romania, through the words of the chairman of the parliamentary commission for the accession of Romania to Schengen Mircea Geoane, called on the West to protect Ukraine from blackmail Russia.

According to the press service of the Ministry of Foreign Affairs of Ukraine, at the talks and. about. Minister of Foreign Affairs A. Deshchitsy signed an agreement between the Cabinet of Ministers of Ukraine and the Romanian government with the Minister of Foreign Affairs of Romania T. Korleяyan. Among other statements, Korletsyan condemned Russia's actions on the territory of Ukraine. At the same time, he confirmed Romania’s support for state sovereignty, territorial integrity and independence of Ukraine. It is curious that, at the same time, the parties reached agreement in continuing the Ukrainian-Romanian dialogue on the protection of the rights of national minorities.

What are such minorities worrying Romanians? Romanians and excite. Everyone has long known that over a hundred thousand people in Ukraine already have Romanian passports. What does it mean? This means that they are the real Romanian citizens whose rights may well protect the Romanian state. In general, the Romanian ethnic minority in Ukraine has more than 150 thousand people.

Everyone probably knows about the leaflets with the inscriptions "Here Romania", which have been persistently distributed in the settlements of the Chernivtsi region for several years.

In Internet got information that in January the Romanian diary “Adevarul” openly demanded from the government “to protect compatriots living in the territory of Ukraine”. To accomplish this task, in the opinion of the publication, it is necessary to occupy "the former Romanian territories" (Northern Bukovina, Hertz district, Southern Bessarabia). In “Livejournal” VVV-IG author andrei_kurpskiy writes:

“On March 6 of this year, the well-known Romanian publication Adevarul ... published a note about unplanned military exercises of the Romanian army on the border with Ukraine scheduled for (sic!) 16 in March 2014. According to the newspaper, they are associated with an incident that happened not so long ago in the Chernivtsi region of Ukraine, when a group of militants from the Right Sector organized a campaign of intimidation of the Romanian population in a village on the border with Romania.

I also remove from the post a translation from Romanian into Russian:

The Romanian Armed Forces will conduct 16 March 2014, unplanned tactical exercises in the territory of South Bukovina (Suceava and Botoshava counties). The 2 Mountain Squad Brigade "Sarmizegetuza" together with the 1 Mechanized Brigade "Vasily Lupu" will take part in the exercises.

It is possible that the exercise is related to the recent incident in the Chernivtsi region of Ukraine, when a group of nationalists (the Right Sector) burned several houses in the village of Kostichany on the border with Romania. More than ten injured are now in the hospital of Bucharest with injuries and burns of varying severity. Spontaneous rallies are held in settlements on the border with Romania, demanding that the Romanian authorities protect their own citizens in Ukraine from the tyranny of the fascists.

Currently, there are about 180000 Romanians living in the Chernivtsi region of Ukraine. Romanian passports have about 80% of Ukrainian Romanians. ”


According to the author, under the pretext of "protecting the Romanian citizens" in Ukraine, both the 2-I mountain brigade "Sarmizegetuza" and the troops of the NATO bloc may appear.

The media writes about the joint naval exercises of Bulgaria, Romania and the USA in the western part of the Black Sea that started on March 12. The fact that they are not related to the situation in Ukraine, said the captain of the I rank of the Bulgarian Navy, Kirill Mikhailov. He said that these exercises are traditional for the Bulgarian Navy and are conducted when foreign warships visit Bulgarian ports. Approximately the same is said in the American Navy. (By the way, parallel to the 11 March, large-scale airborne training exercises began in Russia.)

And here's another one news. The General Headquarters of the Armed Forces of Romania developed a plan for the protection of the Romanian national minority in Bukovina and in the Odessa region.

Romania can resort to Ukrainian intervention even without consulting with NATO. The reason for the invasion may be any appeal of the "gatherings" of the Romanian population of Ukraine to the Romanian authorities with a request to protect them. It is reported that the Senate of Romania agreed with the president to introduce troops into the Chernivtsi region and part of the Odessa region. These territories are planned to be made under the control of Romania by state entities that will later become part of it. The implementation of the plan will be the special forces battalion Vulturii, whose military personnel are trained in the United States.

According to the source, Romanian generals propose to take advantage of the decline in the morale of the Ukrainian army due to the political crisis. “Tourists” are already arriving in Transcarpathia: the very special forces disguised as civilians ...

There are also Romanian appeals to the West.

A convenient position, you will not say anything: the West should give money and protect, and in the meantime Romania will be engaged in defending the rights of its citizens - minorities with passports. Thus, on the one hand, Romania has statements about diplomacy, and on the other, plans of intervention. And so that the West does not mind, Bucharest is yelping at Moscow - the old enemy of the West in the Cold War. So, on the sly, Ukraine can be shredded into pieces - about how to cut a circle into segments in the old children's game “Knives” ...

Ctrl Enter
Noticed oshЫbku Highlight text and press. Ctrl + Enter
We are
Results of the week. “You are already indebted to the sea: neither the bottom nor the coast”Bulgaria between East and West
Military Reviewin Yandex News
Military Reviewin Google News
306 comments
Information
Dear reader, to leave comments on the publication, you must sign in.