There was no money, no, and there will not be 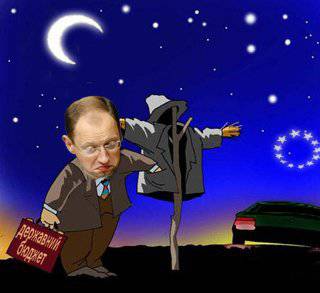 Nevertheless, Putin needs to erect a monument in his lifetime for how he skillfully fucked all this Euro-American riffraff weapons. At the same time, practically doing nothing. And why do something. if everything is already done in advance and you just have to wait for the crowd to go hungry for a complete mug to climb into the prepared mousetrap.


It turns out that there is one small phrase in the agreement on providing Ukraine with the very first tranche for 3 billion, oddly enough from the 18 Article of the Budget Code of Ukraine itself.

In the prospectus of two-year Eurobonds for 3 billion dollars, it is said that while the securities are in circulation, Ukraine "undertakes to maintain the total amount of public debt and state guaranteed debt at no more than 60% of annual nominal GDP"

This provision was included in the terms of the tranche at the insistence of Russia.

And now it turns out that only one small phrase finally puts an end to all attempts by the junta to get at least something from the West. It is not by chance that even all the talk about American pitiful 1 billion of financial aid, which was expected to be received before the end of February, has disappeared today.

The speech, of course, is not in one and not in three billions. For the sake of saving one’s own face, such a sum could be scraped together. It's about much more.

You can simply count. 2 billion of debts for gas, 3 billion of Eurobonds, 12 billion of fines for violating agreements on the same gas. Total whole 17 billion dollars, which in transit should go to Russia before one dollar falls into the hands of the junta. With that, she herself will need nothing less for this life only this year.

And neither the EU nor the United States has such money. Even more ridiculous is that, even theoretically, with the complete determination of the same EU to chop off Ukraine for his beloved, he will have to take this money from Russia or China itself. The latter, if Russia will not mind. As a result, the EU must climb into debt servitude on its own for 30 + billion dollars before Russia just to prove the viability of the Kiev junta and its correctness in this matter. With that, the money itself will still go to Russia.

Such idiots in the EU even today is mute. There are no them in the USA. After all the speeches of his politicians about Putin’s “bloody dictator”, the American voter will definitely not understand why he should give a few tens of billions of his own “dictator” from his own pocket when he is constantly cut off something himself. That social guarantees, the financing of medical services, the financing of the American army.

That is, in fact, having devoured a virtual piece of Ukrainian lard, the EU and the United States found themselves in a cage, where they voluntarily climbed behind this lard, without a single hint of a decent exit with a non-dented skin. Who in these conditions will think about Ukraine? Your face would save.

For the sake of completeness, let us remember who actually did what or stated during the last month.

Russia legally made just two points. I hosted the legitimate president of Ukraine, Yanukovych, and allowed myself, in which case, to send troops to Ukraine to protect the Russian population. Yes, I forgot. He also holds the olympiad in every sense with success.

Ukraine lost Crimea. Partly in support of the junta's pants, she peeled off her own oligarchs, feeding them with promises of a bright credit tomorrow. Signed in his own incapacity to maintain a minimum order in the country. Aroused against itself, albeit not enough for complete failure, the broad masses of the population in the South and East of the country. I was convinced of the incapacity to manage my own armed forces, dismissed all the professionals from the police and the SBU, created in their place semi-legal (in fact controllability) armed gangs. With her statements and actions, she completely cut off ways for normal relations with Russia. Loudly announced the immediate readiness of the West to help the junta with all necessary things (which it substituted for it). Publicly declared its willingness to join NATO, the EU and then everywhere, where they will.

EU. Publicly supported the coup d'état in Ukraine. He promised financial assistance (did not give and will not give, see the reasons above). He promised, but he would not even accept Ukraine in the EU as an associated candidate (there is no money for the maintenance of the junta). I happily accepted Ukraine’s readiness to join NATO, but would not accept it (due to the Crimea problem and the impossibility of finally quarreling with Russia). He threatened Russia with terrible sanctions, but could not introduce them in order not to run into an answer.

USA. Everything is about the same as with the EU, only it will cost more. The impossibility of using political methods to force the opponent (Russia) to the decisions they need and the simultaneous unpreparedness for a real war means the complete loss of a person, which will affect the status of the dollar in the next few months.

That is, the situation once again changes dramatically.

At first, Russia favored the unity of the country, while the West sought to pinch a large piece from the West. Then, the West, sensing a freebie, wanted all of Ukraine, only to itself, and Russia seemed to be struggling weakly and uncertainly for influence in SEP. Now, again, Russia, having taken the prize in mind of the Crimea, will take away all of Ukraine with complete non-resistance of the West, which will remain, at best, long and hard to wash away from the Ukrainian guano, into which he voluntarily crawled by the ears. At the same time, in every possible way persuading Russia to remember less about this nightmare in the public sphere.

Truly, if you sit quietly by the river, you can see the corpse of your enemy sailing along it. All did everything yourself. Junta. EU, US Is it any wonder after all this that Russia is silent, silent, and will continue to be silent until all of them are asked to resolve the situation in any way convenient for her? And this is not a weakness. This is the highest manifestation of the Force.