Necro elite. How she captured Ukraine and what will happen now 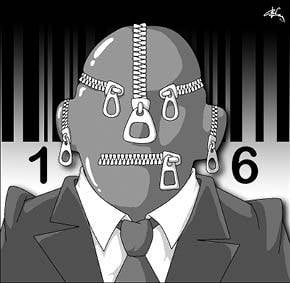 Many are now looking at a set of people ruling something on behalf of Ukraine, and do not understand where they came from. Let's do the autopsy.


... The degradation of elites in Ukraine began immediately with the beginning of the separatist. Each subsequent elite set was worse than the previous one. Kuchma was worse than Kravchuk, Yushchenko - worse than Kuchma. Yanukovych - was a small exception - he understood the economy and cared a little about industry. But Ukraine rejected him as a foreign body. Yanukovych, by our standards for the life of the country is contraindicated, for Ukraine was too compatible with life. And in place of Yanukovych came a new elite - completely incompatible with the life of the state: Tyagnibok, Fahrion, Yatsenyuk, Turchinov, Yarosh and the full set of Nazis, abnormals and maniacs.

At the moment, the degree of its adequacy of the new elite shows that communicates with the dead. That Yarosh will call for the help of the dead Umarov, then Klitschko will talk to the dead policemen and Protestants. Now Yulia Tymoshenko wrote an open letter to Taras Shevchenko.

In addition, the elite writes to the East and the Crimea full of love and promises of affection of the message, and on Facebook he writes openly that later, when persuasion will act, he will hang everyone.

Specially trained activists are standing on the edges of the roads and waving the flags of military equipment leaving the troop locations, the condition of which is not much different from scrap metal.

The thirst of human flesh and rushing from everything - from words, from action, from grinning in rye ecstasy.

What is the name of a being who communicates with the dead and sacrifices the living?

These are necromancers. The Ukrainian elite is a necroelite, consisting of necromancers, sacrificing their subjects to their idols - the list only opens with Bandera and Shukhevych, now it has been thoroughly supplemented with a "heavenly" hundred. It is an elite with the cult of the Holodomor, which justifies sacrificing the living to the dead.

Ukrainian elite is not just a bad elite. It is not even anti-elite. This is nekroelita.

This is the first important component of the picture.

The second. What is the reason for the uprising of the East and Crimea suppressed right now throughout the whole?

The answer is obvious: the Russian population of the Crimea and the East has never been loyal to Ukraine as a state because of the Ukrainian state Russophobia. It is not only and not so much about hatred for the Russian Federation and the city of Moscow, as about hatred of Ukrainians for their own Russianness - and for those who have too much of it. That is, to whole regions.

The state ideology and the state policy following from it caused its instability and internal inconsistency.

It would seem that each state strives for internal stability, ensuring for itself the greatest loyalty of citizens, and it is not in its interests to create conflicts within itself.

But in the Ukrainian case, this is absolutely not the case.

What is the reason for the irrationality of the internal policy of the Ukrainian state?

And Ukraine’s foreign policy was to break away from Russia to the maximum, contrary to the natural economic, cultural, and rational political interests of Ukraine.

The prize in such a policy was “independence”, which Ukraine’s necro elite had converted into power and money.

The viciousness of the system consisted in the fact that the state elite of a healthy country gains and increases its condition and power by strengthening statehood, developing the territory acquired in flax, increasing the population, and so on. In the Ukrainian case, everything was exactly the opposite - the elite was spending Ukraine. Hence the necrocult - it is the most suitable.

The development of Ukraine pushed her toward Russia, and this threatened “independence”. At the same time, the necroelite had no own strength to ensure its own legitimacy and “independence”, and, therefore, an external support was needed.

On the other hand, an ideological tool was needed that would prevent Ukraine and Russia from coming together, legitimize the actions of the elite to detach Ukraine from Russia and justify cooperation with countries hostile to Russia.

The answer was Ukrainian nationalism, the cult of betrayal and the necrocult.

Theoretically, yes. Ukraine could go on this path twice - in 2004-m and now. Both times the chances were associated with the presidency of Yanukovych. Which flush them both times in the toilet.

Why? Among the reasons is that in Ukraine there was an additional factor, which was absent in Belarus.

I am talking about a huge foreign Ukrainian diaspora with an elite consisting of Nazi collaborators who later transferred to the service of the CIA.

This diaspora, as well as the presence of a bridgehead - Galicia, made it possible to “inoculate” Ukraine a “new diaspora elite”, which was infected with revanchist sentiments regarding the Soviet historical period. She completed the transformation of the “separatist” elite into necroelite with the establishment of the cult of the Holodomor, Mazepa, Bandera, and the SS Galichina.

The last fork in the road could be the option of voluntary self-dissolution of Ukraine - the rejection of its “non-Ukrainian” lands. But these lands were the most economically developed - firstly, and gave the opportunity to implement complexes of revanchism - secondly. The population of these lands has become the object of elimination of their hatred of Russia by the necroelite. Thirdly, the retention of these Russian lands from reunification with Russia was the work that was carried out by Ukrainian necro-elites in the interests of foreign customers.

From this point on, the process was already irreversible.

I ask you to draw your attention to two key points in the events on both Maidan.

The first is the source of the Nazi necroprivations to the elite of Ukraine on the first Maidan.

The second is the fate of the agreements between Maydan and Yanukovych of 21 February. Please note that this agreement is signed by European representatives - the Ministers of Foreign Affairs of Germany and Poland - Frank-Walter Steinmeier, Radoslav Sikorski and the Head of the Department of Continental Europe of the Ministry of Foreign Affairs of the French Republic Eric Fournier.

But the agreement was not executed, since one of the parties suddenly immediately after the signing of the document began to escalate the conflict.

I'm talking about the now famous “Right Sector”, created with the direct participation of the head of the SBU under President Yushchenko, Valentina Nalyvaichenko, whose Nazi views and cooperation with the CIA are beyond reasonable doubt. The Right Sector is an American project, and it is the United States that is subordinate to it, not Europe.

Thus, the author of the project "Ukraine - not Russia" is fully defined - it is the American special services in collaboration with the heirs of Nazi collaborators. It was they who determined the nature of this project, the structure, the tasks, and, consequently, the terrible fate.

Europe, of course, was complicit, but that brazen slap in the face, weighed by the European ministers from the Americans, perfectly demonstrates who is here on the first, and who on the sidelines.

At the moment everything is almost over. Much has not yet been determined, but it is already clear that the Americans have no more opportunities to keep their project afloat. Not because there are no forces, but because the created “unsatisfied nationally” cadavre devoured itself.

Not because he did something wrong. Not because such was the evil will of someone.

That was his fate.

Cadavre may not know, but he is dead. And it lies on millions of living people, poisoning them with its decomposition.

... Now (not right now, but on the historical moment) Russia has a unique opportunity to act as a demiurge instead of the United States and say: "Behold, I’m creating everything new." And let it be good!