Will the victory in the Crimea defeat in Ukraine? 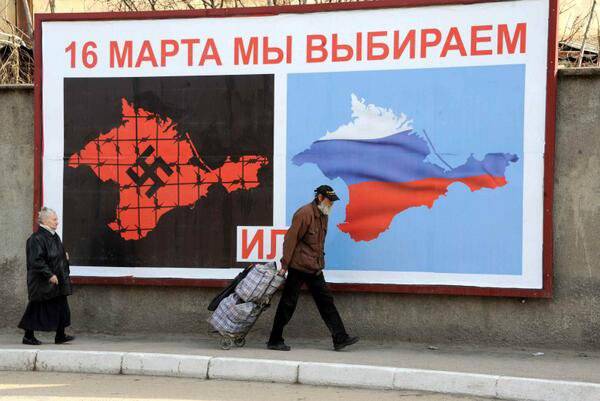 On the eve of the Crimean 16 referendum in March, events from the realm of politics shifted to the information sphere. For clarification, the real actions are purges in the army of Ukraine and the beginning of political pressure against opponents of the Maidan of all categories, clearing the information space. The junta is trying to gain a foothold, to maximize its position and is not yet able to really aggressively act. And most importantly, it is not known how soon it will be capable. That is why for the time being it generates only information foam supplemented by Western mass media and diplomacy.

This is undoubtedly one of the most important reasons why the second round of confrontation in Ukraine is under the complete control of Russia. Conventionally, it began with the overthrow of Yanukovych and the closure of the Olympics in Sochi. It is likely to last until March 16 of this year, when Crimea will vote on joining our country.

After that, all subsequent actions are just formalities that are not paid close attention. There will be only one result: the West does not recognize, Russia will not even look at it, the rest of the countries will most likely keep silent. The only question is the CU countries.

The “Crimean round,” unlike the “Kiev one,” passed so swiftly, harmoniously and, most importantly, confidently, from Russia, that many may have the appearance of our victory. This is not the case.

Indeed, the Crimea is a strategically important territory inhabited by a large number of Russian and Russian-speaking people. The influence of Russia, its moral authority and real opportunities in the Crimea were the highest among all regions of Ukraine. For what we see now, it was enough to show the political will and organization of actions at all levels of government. Which was brilliantly demonstrated.

But! As we know, one round is not the whole game. And we are just losing the game ...

Focusing all political resources only on the Crimea, we miss the Donbass, Kharkiv, Odessa and other Black Sea territories. It becomes obvious that, in contrast to the Crimea, eastern and southern Ukraine does not have such “plush” geographical and power conditions. People's organization and rallies in Kharkov and Donbass were no less in scale than in the Crimea. However, there was no Russian contingent and charismatic leader like Aksyonov. The elites of the regions did not unite in a united front with a specific leader at the head. Dobkin initially did not fit this role.

Now these are, in fact, local, gradually fading hotbeds of peaceful resistance to the regime. But they will not change the situation. Not overthrown Kiev junta. Do not transform Ukraine. Because peaceful, really peaceful, protest actions do not change things, but only create the prerequisites for this. However, the prerequisites do not develop, time is missed, the opportunities of the junta are growing.

I do not deny that after the referendum new “windows of opportunity” will open, but it is obvious that the current ones are not being implemented sufficiently capaciously and completely in the east and south of Ukraine. It remains to hope that everything will not be limited to the Crimean referendum only, and the people of Little Russia will not be left without as much support as the Crimeans. And after the “Crimean round”, there will be “Donbass” or “Little Russian”.