March 13 2014
19
8 March in Syria is a double celebration. On the one hand, International Women's Day is celebrated, as well as throughout the world. On the other hand, it is also the Day of the People’s Revolution 8 of March 1963 of the year, as a result of which the Arab Socialist Renaissance Party (PASV) came to power.


The party’s statement on the occasion of the 51 anniversary of the Revolution, in particular, states: “For half a century the enemies of Syria have taken all sorts of pressure, threats and blockades to eliminate the national-patriotic project, which the March revolution has taken. The current situation in the country shows that the global war against the Syrian people, the army and the leadership is aimed at undermining the principles of the March Revolution 8. The continuation of the revolution and opposition to all enemy intrigues is achieved thanks to the resilience and solidarity of the Syrian people, as well as the ability of the revolution to take into account changes in the life of society. ”

The party expressed confidence that the SAR "will triumph over the conspiracy organized by the enemies of the nation and their accomplices against it, because it is at the forefront of the forces fighting for liberation, independence and the creation of a new balanced international system."
On this day, a meeting of the Syrian People’s Council was held, at which its chairman, Jihad Al-Lyahham, stressed that the March March 8 revolution "became a key moment in the country's political and economic life." According to him, “Syria continues to follow a revolutionary course to achieve progress, freedom and democracy, strengthening its sovereignty and territorial integrity and realizing the common will of the people who paid with their blood for the revolutionary changes.”

ATS President Bashar Al-Asad met with the leadership of the PASV Committee of Damascus Province. He recalled that over the years, Syria has been subjected to numerous information attacks, but continues to resist with honor all hostile plans and extremist ideas.

He stated that all plans of countries supporting terrorism are doomed to failure, and the fight against extremism and terrorism will continue.
Bashar al-Assad also pointed out that the policy of the Syrian leadership on the world stage is to strengthen relations with friendly states, first of all, Russia, China and Iran.

On the same day, a rally of the Universal Women's Federation was held in front of the UN headquarters in Damascus in honor of International Women's Day. Its participants handed over to the UN representative an appeal in which they demanded that every effort be made to stop arming, financing and other types of support for terrorists in Syria.

Meanwhile, the Syrian army continues counter-terrorism operations. During these days, they managed to free the village of Az-Zara from the province of Homs from gangs. Previously, it was one of the main strongholds of terrorists in the area, located near the ancient medieval castle Krak de Chevalier, which continues to be under the occupation of militants. It is from this village that the thugs entrenched in an outstanding monument storiesreceived supply weapons and food.

As stated by the High Command of the Army and the Armed Forces of the SAR, a large number of terrorists were destroyed during a successful operation with the support of local residents. Because of the geographical location of Az-Zary, this special operation is of particular importance - the village is located near a large highway connecting the coastal and central region of Syria. Moreover, this particular settlement was a transit point for terrorists penetrating from Lebanon.

Currently, Az-Zarah is clearing explosive devices identified by criminals, searching for tunnels and weapons depots. 30 militants from the village of Al-Zarah voluntarily surrendered to the authorities. In the city of Homs, 19 terrorists laid down their arms.

Army special operations continue in the city of Yabrud, Damascus province. In the industrial zone, on the square of As-Salkhia and on the northern entrance to the city, fierce clashes took place, as a result of which a large number of bandits were destroyed, their warehouses with weapons and ammunition were destroyed. Not far from the city of Deir-Atya, more than 10 explosive devices were deactivated by sappers.

Another major special operation of the army takes place in the province of Hama in the village of Mork. Dozens of bandits from Dzhebhat Al-Nusra linked to Al-Qaida, including the leaders, were killed there.

The crimes of the militants against the people

Militants supported by the West, Qatar, Turkey and Saudi Arabia continue to commit crimes against the Syrian people. A few days ago, in the city of Homs, the Andalus school in the Al Hamra quarter was fired on with rockets. Several people injured.

In the province of Damascus, gangsters fired mortar neighborhood Dahia Harasta. One of the shells damaged the residential building, the other two hit the hospital grounds. Fortunately, there are no casualties, however, great material damage has been inflicted.

The suburbs of Latakia, located on the Mediterranean coast, were fired on by rockets. One of the shells hit the central street of the Mashrua Demsarh microdistrict, the second - in the shopping center, the third - in the Ramel district of Al-Jenubi. As a result, 14 people were injured.

In the province of Deir ez-Zor, militants killed a journalist, the operator of the Lebanese television channel Al-Mayadin, Omar Abdel-Kader, who also collaborated with several Syrian television channels. The bullet of the criminal hit the young man in the neck.

March 11 in the metropolitan quarter Zablatani mortar shelling led to the death of two people and the wounding of six. The area is the Souk Al Khal Wholesale Market, where it is almost always crowded. Many trade pavilions on the market were damaged.

In eastern Syria, in the town of Kamyshli, Hasaka province, three suicide bombers blew themselves up together with civilians. In addition to the criminals, five people died. Eight - suffered.

The army prevented a crime against civilians in the province of Daraa in southern Syria - five gangsters were arrested who laid an explosive device on the highway.

A few days earlier in the province of Daraa there was a massacre of peaceful people, among whom are an old man and a ten-year-old child. Previously, these people were abducted by armed groups, now the criminals have selected several people from among the captives and shot them. Before that, they were all put on their knees and beaten.

Among this hell there is a nice news - The nuns of the monastery of St. Thekla of the city of Maalula, who had been abducted by militants during the attack on this Christian shrine, were released. 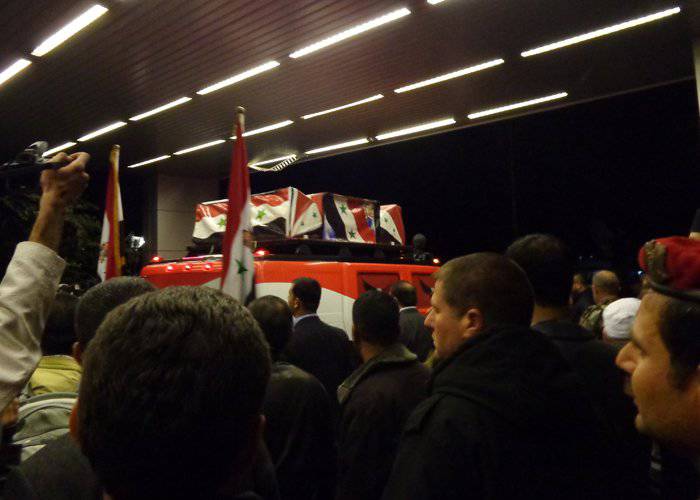 On the Syrian-Lebanese border - the return of the nuns 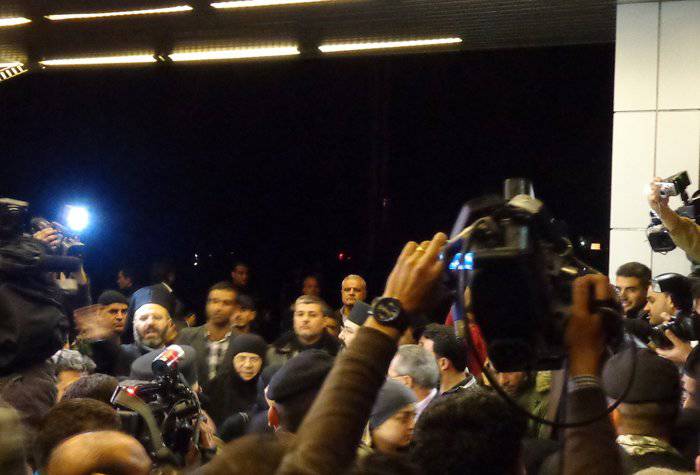 On the night of 9 on 10 March, they arrived at the Zdidedet Yabus border checkpoint on the Syrian-Lebanese border, where they were met by journalists, public and religious figures, and the governor of Damascus. After three months of captivity, 16 hostages took liberty - 13 nuns along with Mother Superior Pelageya Sayyaf, as well as three novices

A delegation from Russia, which includes representatives of the Legislative Assembly of the city of St. Petersburg (Leningrad), is currently visiting Syria. It was headed by a representative of the Communist Party faction Alexei Vorontsov. The delegation was received by the chairman of the SAR People’s Council Muhammad Jihad Al-Lyahham and the president of the SAR Bashar Al-Asad

The President of Syria during the meeting with the Russians, which took place on March 11, highly appreciated the role of Russia in the modern world. He expressed the hope that after many years of a unipolar world, it was Russia that would restore the balance in the international system. The Head of State warmly thanked the Russian people for supporting Syria in the current confrontation. 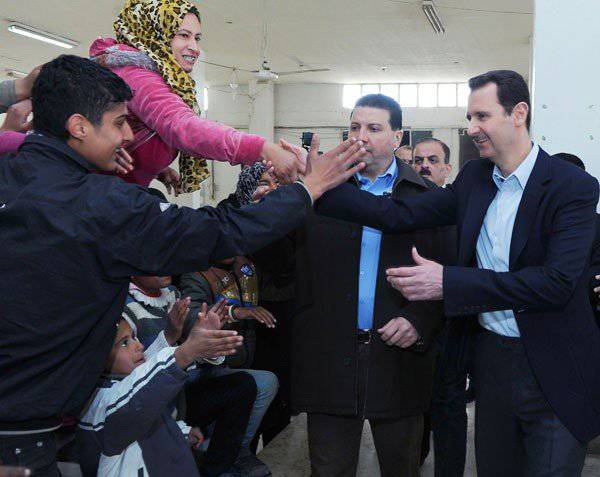 And 12 in March, Bashar Al-Asad visited the temporary residence center in the city of Adra. There are currently placed citizens who were forced to leave their homes because of the crimes of terrorists. The president listened to the people, got acquainted with their living conditions. He said that the state will continue the fight against terrorism, and will also do everything possible to make life easier for people who have lost their homes.

Ctrl Enter
Noticed oshЫbku Highlight text and press. Ctrl + Enter
We are
Is there a solution to the problem of patriotic education of young people? Private initiativesStrangulation: the context, conduct and consequences of the American naval blockade of China
Military Reviewin Yandex News
Military Reviewin Google News
19 comments
Information
Dear reader, to leave comments on the publication, you must sign in.