Ukrainian crisis as a trap for the EU and the US 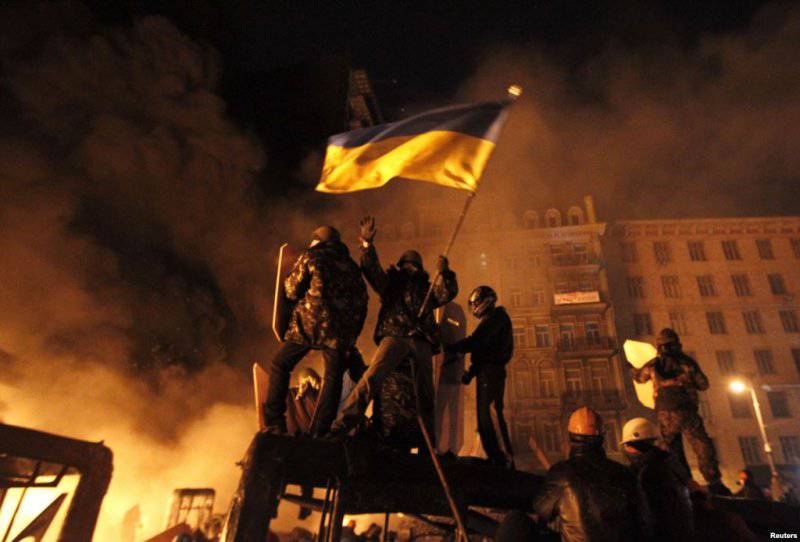 An article appeared in RBC today signed by financial experts Ivan Tkachev, Evgeny Novikov and Elena Malysheva. The essence of the study is that Mr. Putin laid a huge mine under the Ukrainian crisis, which our “partners” did not notice in time. This is one small phrase in the 200-page agreement on the provision of 15 billion to Ukraine in exchange for Eurobonds ...

In the prospectus of two-year Eurobonds for 3 billion dollars, it is said that while the securities are in circulation, Ukraine "undertakes to maintain the total amount of public debt and state guaranteed debt at no more than 60% of annual nominal GDP." As Mitu Gulati, a professor of law at Duke University in the United States, points out, one of the authoritative experts on such transactions that this clause actually repeats the provision of Article XXUMX of the Budget Code of Ukraine. But, according to Gulati, his inclusion in the terms of placement of Eurobonds could be done at the insistence of Russia. In case of violation of this obligation, Russia will have the right to demand early repayment of securities from Ukraine. The bomb exploded yesterday ...

I will try to translate into accessible Russian.

1. If I understood correctly, before borrowing money from someone, the Ukrainian government is obliged to pay Russia's debt - these are 2 billion for gas, 3 for eurobonds and 12 a penalty for gas - total 17 billion. Only after that Ukraine can receive tranches and billions from other sources. Therefore, talk of money the IMF and the United States with the EU, together, hung in the air.

2. If Ukraine gives 17 billion to get something, then she herself needs at least 15-17 billion for life ... That is, the EU or the IMF or the United States or all together should give Ukraine at least 30 billion. Neither the EU nor the United States has such money. You can take money only from Russia or China, no one else has it.

And then in China, if Russia agrees, and without it, again, China will not give ...

That is, we get that in order to get Ukraine, the EU should borrow at least 30 billions from Russia. And for what? To prove to the people of Ukraine that the people who took power are capable of doing something?
Knowing Europe, I doubt it very much. Moreover, recently there have been signals in serious publications that the Europeans are extremely dissatisfied with the situation in which the United States is simply impudently telling their governments what to do.

As an example: today in France, in business and military circles, Hollande’s unconditional desire to follow instructions from Washington — to declare sanctions to Russia — has provoked outrage. This is despite the fact that the neighbor through the English Channel clearly expressed that she was not going to take part in this “bedlam”. Well, there is an example of a sanction on the arrest of Rogozin's accounts, etc. That is, it is a fiction, because government officials have no accounts.

3. In the USA, it may be that kind of money, but how to explain to taxpayers that they will have to be given to Russia for some incomprehensible Ukraine? This is against the background of today's scandal over the hacking of congressmen computers, in which they accused the CIA. For all the documents that denounced this office disappeared. The senators were from the CIA investigation committee. Making a fuss in Congress about sanctions and other things - a pugalovka ... It was not for nothing that two congressmen introduced the resolution, whose names were heard for the first time in Congress itself.

4. Russia initially advocated territorial integrity, if anyone remembers. The West at that time, supporting the western regions, literally inspired their separation. Recall how independent rads appeared like mushrooms after the rain and announced insubordination to Kiev.

Then Russia, when the West reached its feet in Ukraine, began to show external uncertainty, somehow incomprehensible to rush about, Putin altogether went silent ... In the Southeast, the attempts were weak ... And in general, the Crimean crisis was somehow not planned ... The EU and The United States triumphed, throwing off Yanukovich. Russia again was silent, with a goat kid, however, it was bleating about some kind of international norms. West chuckled.

But more or less normal leaders were found only in the Crimea. Dobkin and Kernes disappointed me very much ... There were a lot of strokes with spread fingers, powerful bubbles, and as a result, zilch ... My opinion - having provoked the Russian community, these leaders, stepping aside, simply surrendered everyone.

This government (and in fact the junta) by its actions, as well as loud statements, completely cut off all the ways for normal communication with Russia. Even Tymoshenko decided to be noted, "partisan" with a scythe.

By the way, as far as I own the information, today an application has been submitted to her at the Prosecutor General’s Office. The essence of it - please give a legal assessment of her performance in Germany, where she, putting in an uncomfortable position and Germany itself, and Angela Merkel in particular, promised and called for guerilla actions on the territory of the Russian Federation ...

Another junta announced to the people that the West is about to help now, but the West has not yet decided how to do everything, so far only talk, the same as about 1 billion from the United States. And Ukraine has announced its entry into NATO, the EU, in general, where they will accept, will go there.

6. Russia calmly, without fuss and fanfare sheltered Mr. Yanukovich, who is legitimate from the point of view of international law. Well, and voiced permission to use the Armed Forces to protect the Russian-speaking population. Olympics brilliantly held, while in Kiev held a Sabbath.

7. As soon as there was organized resistance in the Crimea with pronounced charismatic leaders, the junta, with the hands of Avakov and Nalyvaychenko, with Poroshenko’s involvement on March 1, tried to arrange a "crystal night" in the Crimea. The planes with the ministers had to turn around, and Poroshenko wiped off the Crimean spit from himself, since 30 minutes before time H (by the way, many Ukrainian military in Crimea confirm the fact that their parts were raised on March 1 without an explanation for the alarm) both airports and all military units of the Ukrainian army, including the runways of military airfields, were blocked by unknown persons who received the nickname “green men” by the people.

Putin had no choice. If they didn’t use force, there would be a bloodbath, for local self-defense at that time was already partially armed. Applied - Russia is still to blame ... Something like that ... Although I think it’s excellent to figure out what the junta's gift is doing, which used and still uses the factor of the Russian troops to inflate hysteria in Ukraine. In order to distract people from economic mayhem and rally them against an external enemy.

8. The European Union, in fact, publicly supported the coup d'état in Ukraine. I promised everything, but ... I cannot yet give money, because a restrictive article has been revealed. And now great minds are looking for a way out of this situation. Take Ukraine as an associative member - stop, and who will feed all these millions, who will build roads for them, pay pensions? They are waiting and hoping ... NATO? And according to the Charter of this organization, its member can not be a country with unresolved internal problems. Crimea ... Ha ha ha ...

And on the horizon, the prospect of a final quarrel with Russia looms ... Sanctions are threatened with terrible, terrible ... I listened, since I speak the language, and I don’t know what to do - cry or laugh. No one, except France, is in favor of widespread sanctions ... Point, directed against certain individuals. Suppose Britain, knowing full well that, according to the law of the Russian Federation, state officials do not have the right to have financial accounts abroad, calmly suggests arresting accounts of members of the Russian government. We stopped fussing around visas, while loudly stating this ... It doesn’t matter that the negotiations went unsuccessfully for 7 years.

The most interesting thing is that Putin is again silent. Slightly spoke to reporters, and again he was silent that the West was already annoyed at all. I think so, time is playing on us ... And it will all end in a trite way - the West will have to, after trying to do something, turn it to Putin, behind whose back China is quietly looming.

And then the GDP will speak ... In fact, the GDP and its advisers threw the West into such a dup, that it will have only one way out - to ask Russia to resolve this situation somehow.

Therefore, I ask you not to hysteria and not to insult the representatives of Ukraine, who are visitors of our resource. Believe me - they are a hundred times worse than you ... Respect each other.

What was written above is the essence of my personal vision and the result of the analysis and may not coincide either with the expressed official position or with your opinion.

Best regards to all - Santor
Ctrl Enter
Noticed oshЫbku Highlight text and press. Ctrl + Enter
We are
Interview of V. Putin to Channel One and the Associated Press AgencyWhat you didn't want to know about England
Military Reviewin Yandex News
Military Reviewin Google News
60 comments
Information
Dear reader, to leave comments on the publication, you must sign in.