Turchinov signals the Americans about the defeat of the Russians 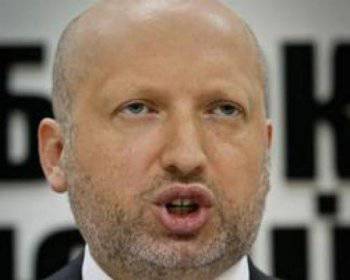 After yesterday's admiral statement Tenyuha that the Ukrainian army is not able to attack, and he will not give an order about it, a statement was made by the Acting Tsar of All Ukraine Alexander Turchinov, which was entitled "Message Kiev Kiev Moscow." And for some reason it is published in The New York Times.

“At this very moment, right before the eyes of the whole world, the final collapse of the Soviet empire is taking place. The plan for its resurrection, which the Kremlin has been preparing for a long time, failed: Ukraine proved that it had reached maturity and became an independent state, which will itself build its domestic and foreign policy” , - he writes.

There is ample evidence of this success - starting with the fact that the protests in an "independent" state were organized in connection with the non-signing of the treaty, which provided for the external administration of Ukraine, to the present catastrophic state of the economy and the society split into two. The death of the Soviet empire, perhaps, Turchinov considers his publication for Russia in the American media?

"Moscow’s plan was thwarted. The people of Ukraine turned out to be stronger than the dictator, who was meant to play the role of a puppet ruler. The opposition quickly gained control of the situation, the authority of the parliament was restored, and a new government was lawfully appointed, " - he continues on.

What planet does Panchinov live on, does anyone know? Control of the situation is perhaps that armed with batons and firearms weapons militants continue to roam the capital of the state; still there are barricades in the center of Kiev; the houses and property of the runaway leaders were plundered; in the southeast, the protest movement against the usurpation of power is growing, and in the western regions there is an incomprehensible movement with seizures and blocking the work of state and local authorities. Or, perhaps, the loss of a part of the territory due to a total lack of understanding of the causal relationships of what happened for the acting president. President and Head of Parliament called control of the situation?

Next Turchinov describes the consequences of the "attack" of the Russian Federation in the Crimea, using the wording "Somali pirates, "brazen and unjustified aggression", "we will no longer play the game older brother - younger brother."

Naturally, special attention is paid to the importance and necessity of Western countries to intervene and protect the independent state of Ukraine. And a special “please” in this regard and a separate “thank you” to the defenders of all oppressed and offended, to the United States of America ... And of course, the Crimea should remain Ukrainian, despite the desire of the people inhabiting it.

In Europe, we now see situations like Crimean, in Catalonia and Scotland, which want to leave Spain and the UK respectively, and I wonder if these countries will use terrorists to prevent this or complain to Uncle Sam?

There are two conditions for "democratic" elections in a non-western country in order for them to be recognized as "fair." First, they must pass under the control of Western observers without massive violations, secondly, the pro-Western candidate must be chosen. Given that the second condition will be met, the first is not mandatory. In the case of the Ukrainian government and personally, Mr. Turchinov, we observe this. They can even be considered legitimate in the West without any elections at all.

And these guys still have the audacity to blame the Crimea, Russia and Putin for something that act in the legal field of international and local legislation?

The unipolar world is dying, Pan Turchinov, and not an imaginary Soviet empire, but you and your supporters still haven’t noticed this.

Ctrl Enter
Noticed oshЫbku Highlight text and press. Ctrl + Enter
We are
A great interview with Sergey Lavrov: about Ukraine, Obama and IranWhat you didn't want to know about England
Military Reviewin Yandex News
Military Reviewin Google News
265 comments
Information
Dear reader, to leave comments on the publication, you must sign in.