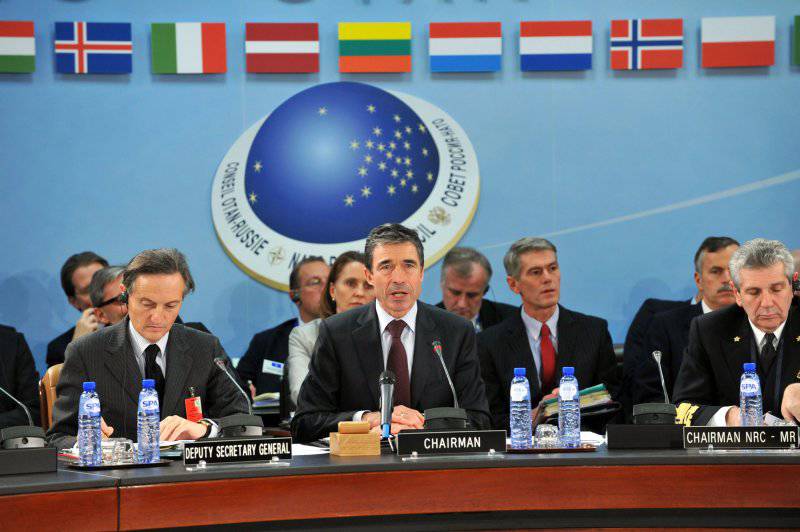 Anders Fogh Rasmussen wants to see Ukraine and Georgia as part of the North Atlantic Alliance: the secretary general of the organization reported this directly after the regular meeting of the NATO-Russia Council, where the situation in Ukraine was a central theme. Obviously, an ally from Ukraine will turn out to be none: Acting President Oleksandr Turchynov the other day acknowledged that only 6 of thousands of Ukrainian servicemen are in combat readiness, and the country has practically no armed forces. But NATO does not need Ukrainian soldiers, but in the territory: the deployment of military bases near the western borders of Russia seems very tempting to Washington politicians.

How does NATO make the “right choice” instead of Ukraine

According to Anders Fogh Rasmussen, the United States and Europe gave the go-ahead to a military alliance with Ukraine back in Bucharest in 2008, and now Kiev still has the opportunity to sign an agreement with the North Atlantic alliance. According to the NATO Secretary General, his organization is now ready to step up relations with the new Ukrainian government and military leadership. Also, the alliance is going to engage Ukraine in various international projects to increase defense capabilities.

With surprising promptness, NATO dictates the Kiev junta with whom to be friends, and with whom it is not. It seems that the North Atlantic Alliance has long thought out every step, and plans for cooperation with Ukraine have been gathering dust in the cabinets of Western strategists since at least the time of the Bucharest summit, or maybe from 2004, when the Orange Revolution took place in Kiev.

Such a conclusion can be drawn from the comments of Russia's permanent representative to NATO, Alexander Grushko. He expressed disappointment with the outcome of the last meeting of the Russia-NATO Council and told reporters that Anders Fogh Rasmussen, without consulting with the Russian side, unilaterally made a decision to stop the North Atlantic Alliance's interaction with Russia. The Russian delegation was not even heard: in fact, the entire meeting was organized only in order to inform Alexander Grushko and his colleagues about the actions already taken by NATO.

The Russian permanent representative also drew the attention of journalists to the double standards used by the alliance: the delegates from the NATO bloc tried to portray the Ukrainian crisis as a conflict between Russia and Ukraine. At the same time, representatives of the alliance completely ignore the situation inside Ukraine, and do not pay attention to the oppression of national minorities in this country, including the Russian-speaking residents of the South-East.

Alexander Grushko noted that NATO is guided by cold war stereotypes. For example, Western countries perceive Ukraine as prey in the global confrontation with Russia, and exercise undisguised pressure on the Ukrainian public to make the "right choice".

On March 5, in the Verkhovna Rada of Ukraine, deputies from “Batkivshchyna” registered a bill on the country's accession to the North Atlantic Alliance. The draft law stipulates that accession to NATO and Euro-Atlantic integration should be the main strategic task in the country's foreign policy. According to the deputies, the proclamation of the non-aligned status of Ukraine in 2010 year led to a decrease in the republic’s defense capability.

Analysts believe the actions of the Verkhovna Rada are predictable. Most likely, the problem of Ukraine’s non-aligned status was discussed during the February meeting of the Ukraine-NATO Council. Representatives of the North Atlantic Alliance were able to convince the delegation from Kiev that it was better to act according to the scenario prepared in the West.

However, “Batkivshchyna” could prepare a draft law on preparing for Ukraine’s entry into NATO only out of desperation: now the unitary state is bursting at the seams, and it is important to make a good face in a bad game. It’s not a fact that Ukraine will become a member of the North Atlantic Alliance, but it is worth at least trying to stay on foreign bayonets ...

But as if in Kiev they did not panic, it is symptomatic that almost immediately after the coup, the new Ukrainian authorities immediately stepped up relations with NATO. Instead of addressing domestic problems, the junta is trying to find support abroad - mainly in the West. The United States and Europe are willing to meet it. Apparently, initially everything was planned.

They want to take Ukraine into the North Atlantic Alliance as a whole, together with the Russian-speaking South-East and the Crimea, which has become a de facto independent state. In another situation, Ukraine with such “baggage” in NATO would never have been accepted, as it happened with Georgia in 2008; but now there are completely different circumstances, and Washington together with Brussels will do everything possible to strengthen military cooperation with Kiev and turn Ukraine into one of the home countries of the American military contingent.

Moreover, the Crimea could become the main trophy of the North Atlantic alliance. If it were not for the diplomatic opposition of Russia, nothing would have prevented foreign troops from conducting an “constitutional order” operation on the territory of the peninsula, as Georgia tried to do in South Ossetia several years ago.

Crimea is an ideal base for accommodation fleet. If NATO ships are based in Sevastopol, there will be a direct threat to the southern regions of Russia, especially to the North Caucasus and Stavropol Territory, where sharp bandit activization can occur. In addition, Crimea is the gateway to Rostov-on-Don and Volgograd. Having taken possession of the peninsula, the West will acquire an outpost to control the Black Sea basin and the land isthmus between the Sea of ​​Azov and the Caspian Sea.

The transformation of the Black Sea into the inland lake of the North Atlantic Alliance is part of a big game in the Middle East. Having penetrated into the North Caucasus, foreign military will have access to Azerbaijani, Iranian, Turkmen oil and gas. Hitler also had similar plans for striving for Baku oil through the Ukrainian and Volga steppes.

If Ukraine, together with Crimea, turns out to be a member of NATO, logically, the next victim of the “European integrators” should be Armenia, where the 102-I Russian military base is located.

Obviously, the West will not give up its intentions: following the results of the last meeting of the Russia-NATO Council, it became clear that neither the United States nor Europe is ready to listen to Russia, and they are trying to dictate to Moscow their rules of the game in the post-Soviet space. Fortunately, the Kremlin is not ready to be led by Western countries: the victory of radical militants in Kiev seems too ephemeral, and it remains unknown how long the current Ukrainian government will survive; probably her days are just a few weeks.

During this period, Ukraine clearly does not have time to become a member of NATO and the European Union. Maybe the association agreement with the EU will be imposed on the Western “well-wishers”, but this will not entail any practical consequences, since the new people's government, if it is formed, will obviously refuse pro-European rhetoric and will try not to drag the country into alliance with those states that sponsored the February putsch in order to make Ukraine a disenfranchised satellite of the North Atlantic Alliance and the European Union.

Ctrl Enter
Noticed oshЫbku Highlight text and press. Ctrl + Enter
We are
Situational analysis of the death of the MH17 flight (Malaysian Boeing 777), made on the basis of engineering analysis from 15.08.2014Results of the week. “Abdullah, customs gives good!”
Military Reviewin Yandex News
Military Reviewin Google News
84 comments
Information
Dear reader, to leave comments on the publication, you must sign in.