Will the crisis in Ukraine affect the military-technical cooperation between Russia and Europe? 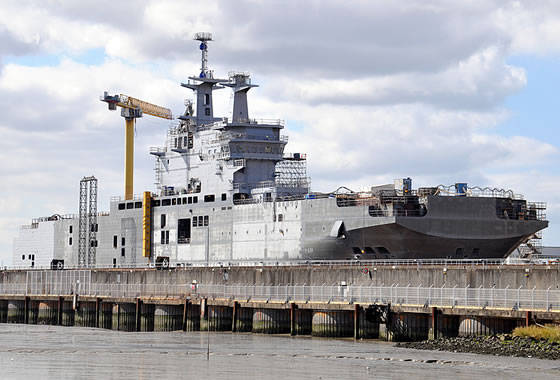 TSAMTO, 11 March. In connection with the events in Ukraine, European states estimate what the introduction of economic sanctions against Russia, including in the sphere of military-technical cooperation, can do to them.

According to "Difens News" with reference to one of the leading experts of the European Council on Foreign Relations, Nick Whitney, despite the harsh rhetoric, the "punitive" measures of Europe are strictly limited. In his opinion, the restrictive nature of these measures reflects concerns about the possibility of serious economic losses due to the introduction of full-scale sanctions against the Russian Federation, including in the sphere of military-technical cooperation.

The Mistral-class contract for the construction of amphibious-command ship-docks (Batiment de Projection et de Commandement - BPC) was concluded in the 2011 year. It provides for the delivery to Russia of two Mistral-class BPC ships, their maintenance and the provision of various services, including initial material support, personnel training and technology transfer. The contract amount is 1,2 billion euros.

As part of the contract, DCNS, acting as a work manager, performs the construction of buildings and the integration of control and communication systems. Construction is carried out at the enterprise "STX France" in Saint-Nazaire.

In Saint-Nazaire 5 March, the first running tests of the lead ship of the Vladivostok series began. French President Francois Hollande during the European summit, said that France is in compliance with the signed contracts and the agreement remains in force. The first BPC is to be delivered to Russia in October 2014 of the year. The second ship is scheduled to be transferred in 2015 year.

In addition, France actively proposes the Russian law enforcement agencies PVP (Petitéuleule Protege) and VBL (Vehicule Blinde Leger) armored vehicles, several copies of which, according to the "Difens News", were recently sent to the Russian Federation for testing. A company representative denies that the equipment is intended for the armed forces. According to Renault Trucks Differences, it would take Russia about 10 years to create a VBL-type vehicle. Therefore, buying them in France is more expedient. Intelligence machine is equipped with a more powerful engine and enhanced armor. If an agreement is reached, the Russian Federation may receive several hundred BBM of this type.

Earlier, TSAMTO reported that since 2011, the French company Panar (now the Renault Trucks Differences division) has been negotiating the sale of 3,1-ton light BBM VBL with the wheel formula 4 X4 for Russian border troops. The cost of the agreement providing for the supply of up to 500 BBM was estimated at that time in 200 million euros (260 million dollars).

In October, at the Interpolitex-2013 exhibition, the French company Renault Trucks Difenz and the Russian CJSC ASTEYS presented the project of the ASTAIS-VBL lightweight floating armored car, which is supposed to be produced in Russia. According to the statement of the Executive Director of CJSC ASTEIS V. Babayev, the localization of production was planned to begin in 2013. At the first stage, the Russian side intended to supply the housing, wiring and dashboard. It was planned to manufacture an experimental batch of machines in the middle of the year and hand over to the units of the Ministry of Internal Affairs for testing, and then make a decision on mass production.

Thales has also entered into a number of contracts for the supply of equipment to Russia. According to the representative of the company, most of the business is focused on the civilian sector. In the military segment, Tales has launched production in Russia of equipment for a laser target designation container, tanks T-90, Ka-52 helicopters and Su-30 fighters.

Safran Group has been operating in Russia for over 20 years, supplying aviation and helicopter engines, optoelectronic systems and navigation systems. So, the company supplies engines for Ka-226T and Ka-62 helicopters. Sazhem (a Safran division), specializing in the development and manufacture of military systems and equipment, has been providing Russian industry with thermal imagers for a long period of time. In the field of navigation systems, Safran supplies laser gyroscopes to Ramenskoye Instrument-Making Design Bureau OJSC for their subsequent integration into Russian fighters.

At the end of 2011, Sazhem together with its Russian partners, Rosoboronexport OJSC and Technocomplex Inertial Technologies CJSC (a subsidiary of RPBK OJSC), established a joint venture called RS Alliance with the goal of developing, manufacturing and servicing ring laser gyroscopes in Russia. The new company RS Alliance has already developed the LINS-100PC inertial navigation system, the production of which began at the end of 2012.

In November 2013, Sazhem and Uralvagonzavod Research and Production Corporation OJSC signed an agreement on strategic partnership providing for the production of optical-electronic equipment and other high-tech products of the French company for installation on armored vehicles of the UVZ corporation.

According to "Difens News", Germany was the first to announce the suspension of sales permits weapons to Russia, however, this measure is purely virtual, since, according to the Ministry of Economy and Energy, Berlin did not export weapons to the Russian Federation. However, the list of authorized equipment for sale includes some kind of “protected all-terrain vehicle” and electronic equipment.

According to the contract signed by Rosoboronservis OJSC in 2011, the company Rheinmetall, the cost of which was 100 million euros, builds a combat training center for the Russian Ground Forces at the Mulino landfill (Nizhny Novgorod region).

In a statement released by 7 in March, Reinmetall reported that it was fulfilling its obligations to its Russian partner. The project is at the final stage and the center should be put into operation in the current year. In the statement, "Rheinmetall" noted that the company highly appreciates its prospects in the Russian market.

The UK has previously approved several licenses for the export to the Russian Federation of components for military equipment, intended primarily for Russian security forces. London is currently considering the possibility of cancellation or suspension.

Italy has already felt the change in the procurement strategy of the Ministry of Defense of the Russian Federation, with a shift towards the national producer. Of the 358 planned for delivery of multipurpose BBM "Lynx" Italian "Iveco", assembled and ready for operation only 57 units. However, they are stored and not used. Another 126 armored vehicles delivered to the Russian Federation in incomplete configuration.