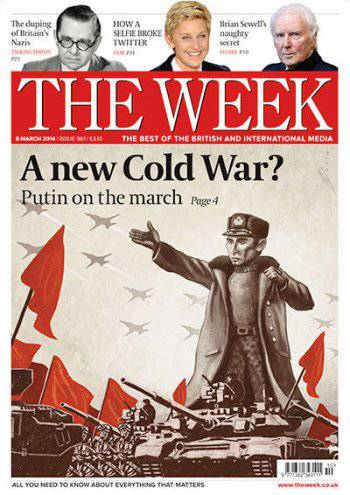 In London, representatives of countries now gather to the Sevens to discuss the sanctions with which they may impose our country. Americans are threatening not to recognize the referendum. And well-known Western political scientists and journalists cry and laugh at the same time.


On Tuesday, heads of Western states meet in London to discuss what to do with Russian politics in Crimea and Ukraine. It is planned to urgently draw up a list of those powerful Russian figures on whom sanctions will fall - bans on entry and arrest of property.

Washington has already said that Russia may consider itself expelled from the G8. “It’s hard to imagine the G8 summit in Sochi,” summed up US presidential spokesman Jay Carney.

Western leaders realized, according to the Guardian newspaper, that a referendum in the Crimea could give Russian President Vladimir Putin a dangerous excuse for further actions in the Crimea and building up a military group there. While the decision on sanctions is planned to be finally put into effect on the day after the referendum.

The top officials of the United Nations and the European Union sit in private for a day, and are powerless to think of anything, according to French Le Monde. All the admonitions of the world community, the Russian Foreign Ministry responds with exactly the same admonitions, inviting everyone to Moscow for negotiations, responding to accusations of deception with accusations of lying, reproaches for biased coverage of events in Ukraine - exactly the same accusations of biased coverage of events in Ukraine, on sanctions threaten sanctions. And unknown green men are already shooting in the Crimea, while in the air, reports France 24.

Political scientists, on the one hand, laugh at the actions of their rulers, on the other hand, they are horrified. At the last meeting of the US Republican Party, the hottest dispute flared up since the days of the pillars of Ronald Reagan and George W. Bush, writes analyst Michael Jerson in the Washington Post. The senators then called out to one ghost, then to another, and recalled how Reagan managed to bargain with the USSR, and Bush threw rockets into Iraq, but could not come to a common opinion: what to do today - and it’s impossible to bargain, and the rocket will not let go. The simplest was to mix with the dirt of the current president - Obama, the analyst teases. “We demonstrate that we are terribly outraged by his outrage at the behavior of Vladimir Putin. Americans can not develop a legislative framework for the development of humanitarian policy on the Crimea, while Russia is mobilizing all the ideas of past centuries. The argument “let them kill each other there” is suitable for Syria, but “Putin himself will figure it out” will be harder to sell. It's time to call the ghost of Reagan, so that he would understand Obama, ”writes Gerson.

Mark Kerstin, a columnist for the Globe newspaper, believes that the recent humanitarian doctrine has cracked — no one can do anything against the emergence of a “dictatorial regime in Europe that is not persuaded”. "The language of the human rights defender has become double-edged weapons"- it turned out that they can use anyone. You will be presented with the referendum notes, filled out according to all the rules. Speakers of parliaments and foreign ministers will use the correct rhetoric of humanitarian law, keeping the machine gun under the hollow or standing at gunpoint themselves, the journalist said. At the same time, according to Kerstin, there is no way to refute the hypocritical language, because at first glance international laws do not seem violated, and the most cynical, in his opinion, that Moscow uses the precedent of Syria to manipulate the Security Council.

“Russia appears to be a tough, decisive human rights activist (who has violated the rights of Russians, is still unknown), and against this background, the violation of Ukraine’s sovereignty is somehow lost,” the columnist believes.

“Putin is from the country of the Gulag, and he can concentrate power without killing or special violence. And he knew that we are not capable of anything, ”said renowned political analyst Richard Cohen.“ There are many nations in the world that suffer from lack of freedom. It's terrible if none of us learn a lesson from what is happening. ”

Responded and Russian political analysts. Vladimir Pastukhov, a professor at Oxford, prophesies the war of “Gopnik and Nazi”, and writer Maxim Kantor expects the invasion of the New Horde and the Scythians “with slanted and greedy eyes”: “Russian patriotism of a new type originated, partly similar to the previous one, but with new, Tatar-Mongolian, features The word "Russian" has become a kind of spell - it is no longer a communist, and not at all Orthodox, it is a representative of a passionate offended people who have a geographical destiny and a special mission ... the mission is defined by the words "survive" and "go ahead"; This is a strong impetus, like a steppe warrior. And the West is staring, mouth open: what do you say against the steppe logic? What do you say to Tamerlane? Fight for democracy? Tamerlan only smiles in response - he is not bad and not good, he is just the way he is: he goes forward like a prairie fire, that's all. It is impossible to object to him. The West has nothing to oppose Tamerlane; the organism of the West is flabby and overweight from democracy, the West itself has ruined its philosophy and art, it cannot say anything across. "

Ctrl Enter
Noticed oshЫbku Highlight text and press. Ctrl + Enter
We are
A great interview with Sergey Lavrov: about Ukraine, Obama and IranWhat you didn't want to know about England
Military Reviewin Yandex News
Military Reviewin Google News
399 comments
Information
Dear reader, to leave comments on the publication, you must sign in.