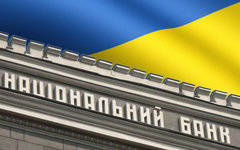 There are almost three times more foreign exchange in the country than legal tender.


Journalists and political scientists covering events in Ukraine and around Ukraine rarely look at the official statistics of this country. Partly because there is no confidence in official statistics. But international statistics prepared and published by the National Bank of Ukraine (the country's central bank) deserve attention.

About international statistics of the NBU

Of course, and it is distorted. But not because the officials and employees of the NBU deliberately go to fraud. Hardly. The compilation of such statistics is monitored by the International Monetary Fund, which has repeatedly given money to Ukraine and, accordingly, wants to have the most objective picture of the financial and economic situation of its “client”. Another thing is that the NBU does not always have complete information due to the fact that a significant part of the economy of Ukraine, including its foreign economic sector, is in the shadow. And the “shadow” is therefore the “shadow” because it prefers not to report anything about itself. Anyway, but the international statistics of the NBU is useful for the first, preliminary acquaintance with the economic situation in Ukraine.

Among the statistical reports of the NBU, a special place is occupied by the balance of payments (PB) and the international investment position (IIP). The second of these documents is the ratio of Ukraine’s foreign assets and its liabilities (international obligations). MIP is compiled at a specific point in time. This is an analogue of the company's balance sheet, only the whole state acts as a “company”, and its counterparties are other states.

According to preliminary estimates, Ukraine’s GDP in 2013 in the currency equivalent amounted to 175-180 billion dollars (recalculated at the official NBU rate). It turns out that last year foreign assets in the economy of Ukraine were approximately at the level of 120% of GDP. Compare with Russia. Russia's GDP in 2012 was 2,014 trillion dollars (converted into dollars at the official rate of the Bank of Russia). Assets of non-residents in the Russian economy, according to the Bank of Russia, at the beginning of 2013, were equal to 1,22 trillion dollars. Thus, the level of presence of foreign investors in the Russian economy was about 60%. This figure is very high for Russia, and in Ukraine it turns out to be two times higher than in Russia.

We present the layout of Ukraine’s international obligations (in billions of dollars): direct investment - 75,7; portfolio investment - 32,6; other investments - 102,2. As you can see, the last position is the largest. These are various loans, loans and borrowings. Let me remind you that this is data as of October 1 2013 of the year. To date, the amount is already greater. For example, at the end of last year, Russia transferred the first tranche of a loan worth 3 billion dollars to Ukraine. In fact, "other investments" form the country's external debt. It consists of the principal amount of the debt plus the expected interest on loans, loans, loans. According to the latest data from the Ministry of Finance of Ukraine, the country's foreign debt has exceeded billions of dollars for 140.

Consider now more foreign assets of Ukraine. It is striking that the main types of foreign investments of the Ukrainian economy are currency and deposits. This position accounted for almost 70% of Ukraine’s foreign assets. 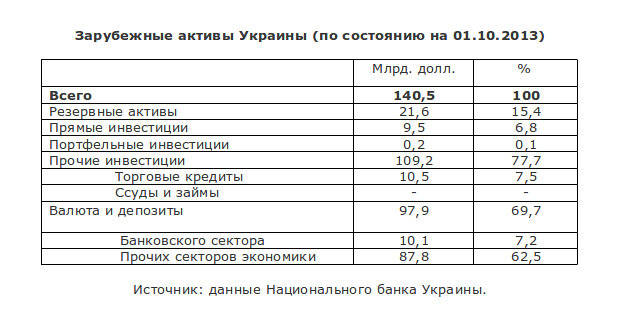 Unfortunately, the NBU does not give a detailed layout of this position. A bit more than 10% - currency and deposits of banks, the rest falls on “other sectors of the economy”. About banks we can say that part of the currency and deposits are their correspondent accounts with foreign banks. Other sectors of the economy are the currency in the accounts of Ukrainian companies in foreign banks, as well as the foreign currency of individuals. Part of this currency is placed on the currency accounts of Ukrainian banks (of course, the citizens of Ukraine place currency on the accounts of foreign banks, but a significant part of such assets simply does not come into the view of the NBU). But, probably, the largest part of the “currency and deposits” position falls on the cash currency that the population stores under the mattress. The NBU does not give statistics of cash currency in the hands of citizens, but there are interesting estimates. For example, well-known Ukrainian analyst Alexander Okhrimenko gave his following calculations as of 2012 year. The cash currency of the population was 79 billion dollars (Alexander Okhrimenko "79 billion under the mattress"). Is it a lot or a little? For the sake of justice, we recognize that there are also a lot of currency in the hands of the population in Russia. The data of the Bank of Russia makes it possible to make a rough estimate. So, at the end of last year, the currency cache we had a little over 20 billion dollars. That is, in Ukraine, the economy is an order of magnitude smaller than the Russian one, the cash currency is several times larger, which indicates an extremely high degree of dollarization of the Ukrainian economy. By the way, in 2012, the volume of national banknotes circulating in the economy of Ukraine amounted to 192 billion hryvnia. In currency equivalent, this is 24 billion dollars. Thus, the foreign currency in Ukraine was almost three times more than the legal means of payment (hryvnia). This is the most important sign of a country losing its national sovereignty, a distinctive feature of the colonial economy.

The second largest position of Ukraine’s foreign assets is its international reserves (reserve assets). These reserves, which are managed by the NBU, are melting right before our eyes. Back at the beginning of last year, they were 24,5 billion dollars. And by October 1 they were reduced to 21,6 billion dollars, which is 15,4% of all foreign assets of Ukraine. For comparison: Russia's international reserves constitute the main position of foreign assets, they account for 40%.

By the beginning of this year, Ukraine’s international reserves had fallen to 18 billion dollars, and according to the latest data from the “interim government”, their volume fell to 15 billion dollars (mid-February). This indicates that the country's balance of payments has large deficits, which have increased dramatically in recent months, when riots broke out in the country. According to our estimates, with current tendencies, Ukraine will only have enough reserves for three months, after which there will be not just a default, but the real economic and political collapse of the country.

In third place among Ukraine’s foreign assets are trade loans (7,5%). According to some experts, this is a convenient channel through which Ukrainian oligarchs are semi-legally withdrawing their capital abroad. After a certain period of time, part of the requirements for such trade credits are written off as “bad debts”, and the withdrawn capital is gradually legalized in the economies of other countries. By the way, because of this kind of fraud, the NBU does not fully reflect the foreign assets of individuals and legal entities of Ukraine. A significant part of foreign assets is out of sight not only the NBU, but also the tax service of Ukraine.

The fourth position is foreign direct investment (accumulated assets). Ukrainian media describe in sufficient detail the content of this position. These are various assets placed by Ukrainian oligarchs in various sectors of the economies of other countries. These are foreign metallurgical enterprises of the Metinvest group, controlled by oligarch R. Akhmetov. The group’s assets are located in Ukraine, Russia, the USA, Europe (Italy, Switzerland, United Kingdom). Only in Europe there are 25 enterprises. Also large are the foreign assets of the Industrial Union of Donbass group (co-owners are Sergei Taruta and Vitaly Haiduk), Privat groups (co-owners are Igor Kolomoysky and Gennady Bogolyubov), Roshen corporation (Petro Poroshenko, Victor Yushchenko’s godfather), Ferrexpo groups (Konstantin Zhevago, “Yulia Tymoshenko Bloc”), Group DF groups (Dmitry Firtash).

Foreign assets: the upper and lower parts of the iceberg

We emphasize once again that the official data of the National Bank of Ukraine on the foreign assets of Ukraine do not provide a complete picture. The numbers are underestimated. In recent years, unrecorded assets of Ukrainian oligarchs in various offshores were identified. A. Yatsenyuk in the heat of the revelations of the “regime” of V. Yanukovych said that during the years of his presidency 70 billions of dollars were taken out of the country. But about how much was withdrawn under the “regimes” of V. Yushchenko and Y. Tymoshenko, the newly-minded prime minister said nothing. According to the estimates of the American analytical center Tax Justice Network, over the years of “independence” 167 billions of dollars have been taken offshore from Ukraine. The amount claimed is slightly less than the gross domestic product for 2012 a year. So, the figure of Ukraine’s foreign assets contained in the official statistics of the NBU (140 billion dollars) reflects only the upper part of the iceberg — the foreign possessions of the Ukrainian oligarchy.

After the financial crisis in Cyprus, Belize became the favorite offshore of Ukrainian companies, which was called British Honduras until 1973. This is stated in the quarterly economic forecast “Ukrainian Economic Trends Forecast” for the third quarter of 2013, prepared by the analytical group Da Vinci AG. Exports of goods to this country, as noted in the report of the group, increased in several months in 1324 times! “Its volume has already exceeded Ukraine’s exports to such European countries as Germany, the United Kingdom, and Spain,” the report says. Marshall Islands, Seychelles, Panama became other directions for withdrawing capital from Ukraine after the well-known events in Cyprus in March last year.

On foreign assets and "offshore aristocracy" of Ukraine

A new Prime Minister Arseniy Yatsenyuk every day as a spell says the words: "The treasury is empty." And then another memorized phrase follows: "We are ready to receive IMF loans under any conditions." Even judging by the official data of the NBU "International Investment Position of Ukraine", it is clear that the country has sufficient reserves to overcome the current economic deadlocks. The main position of Ukraine’s foreign assets “currency and deposits” is almost 100 billion dollars. But, apparently, the “provisional government” of A.Yatsenyuk was brought to power by the Ukrainian oligarchs, who own a large part of these foreign assets. Therefore, Yatsenyuk does not even stutter about these assets, but beg for a few miserable billions in the IMF.

According to expert estimates, among some of the oligarchs in Ukraine, foreign assets exceed assets that are located in the Ukrainian economy. Ukrainian oligarchs are a typical "offshore aristocracy", whose foreign assets are under strict control of the West. The West at the beginning of this year threatened the Ukrainian oligarchs with the seizure of their foreign assets. We all remember how Victoria Nuland, a State Department official, reprimanded the most important oligarch of Ukraine, Rinat Akhmetov, and demanded that he “restore order”. Therefore, there is no doubt that “restoring order” (the February “Maidan”) financed and organized precisely “offshore aristocracy”. By the way, the Russian leadership also needs to remember this and learn from the events in Ukraine.

Ctrl Enter
Noticed oshЫbku Highlight text and press. Ctrl + Enter
We are
What you didn't want to know about EnglandWill Kudrin’s resignation lead to the abandonment of the “currency committee” regime?
Military Reviewin Yandex News
Military Reviewin Google News
18 comments
Information
Dear reader, to leave comments on the publication, you must sign in.