Cossacks as a new branch of the army

March 13 2014
245
Territorial defense in Russia is not secured and requires unconventional ways to solve this problem.


Solving the issue of the country's territorial defense can be achieved by creating a special component in the Armed Forces of the Russian Federation - territorial troops formed on a militia basis, that is, by actually re-creating the Cossacks as a military-service class.

The collapse of power in Ukraine clearly showed that reliance only on power structures and support of the unorganized mass of the population does not guarantee the stability of power and the stability of the state. When mass demonstrations of people take place, especially those distributed over a large territory, law enforcement agencies simply do not have time to ensure timely response to all actions.

At the same time, there is still the problem of territorial defense, which in our country has not been solved at the proper level.

The question of territorial defense

In military theory, territorial defense is defined as “a system of legal, military, and state defense measures conducted by heterogeneous forces deployed in a particular territory of the Russian Federation to protect facilities and communications in both peacetime and wartime from enemy actions, acts of sabotage and terrorist acts, and with the introduction of martial law - its establishment and maintenance. " 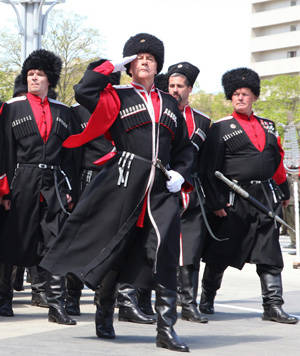 All responsibility for planning and organizing territorial defense lies with the district commander and his headquarters. The military commissariats, the bodies of the Ministry of Internal Affairs and the Federal Security Service of Russia, and other executive bodies participate in the planning and execution of tasks for the territorial defense plan.

Based on the definition of territorial defense and in accordance with modern views on its content, the range of its main tasks is very wide.

First of all, it is the protection and defense of important military, state, economic and communications facilities.

The second most important task of territorial defense, especially relevant in wartime and, as Ukraine’s experience has shown, in the face of social and political instability in the country, is active opposition within the zone of responsibility and on its borders to forces that can damage the protected objects. First of all, this is the fight against landings, sabotage and reconnaissance groups, terrorist groups and gangs.

Another important task of territorial defense is to ensure the establishment and maintenance of special legal regimes, martial law or a state of emergency in the country or in its individual regions. Under these conditions, the protection of public order and public security is of great importance. To do this, only patrols on the streets in a large metropolis may require up to two or three thousand or more. And it will also be necessary to strengthen the protection of particularly important state and other objects.

Another major task of territorial defense is the elimination of the consequences of various destructive impacts.

To accomplish such a volume of tasks, you need an appropriate amount of personnel and technical equipment.

The security forces do not have enough personnel

The number of internal troops of the Ministry of Internal Affairs of Russia is about 180 thousand people. At the same time, their main tasks largely coincide with the tasks of territorial defense. However, of these, no more than 30 – 40 thousand people can be involved in solving problems within one district.

In addition to the internal troops from the Ministry of Internal Affairs, regional formations, such as OPON, as well as local police units will be involved in solving territorial defense issues. The total number (based on the total number of the Ministry of Internal Affairs of Russia) of these forces, which can be brought in to solve the tasks of territorial defense within one district, can be estimated at no more than 15 – 20 thousand people.

The Ministry of Emergency Situations is called upon to perform mainly the tasks of liquidation of consequences The organs of the FSB, resolving questions of a counterintelligence nature, will not be able to make a noticeable contribution to increasing the number of groups of territorial defense forces.

Solution - the revival of the Cossacks

The main requirements that today it is advisable to present to this kind of troops, include:

1. Economic autonomy with minimization of the burden on the state budget.

2. Self-reproduction through a specific system of parenting.

3. Maintaining the designated level of combat readiness, serviceability of weapons and military equipment mainly at their own expense with minimal government support.

The territorial militia principle of the formation of such troops most fully meets these requirements, which presupposes the presence of personnel (ranked as active service in territorial troops) in areas of permanent residence if they have weapons, ammunition and military equipment warehouses in places within walking distance. At the same time, some of the light rifle weapons can be stored at home, as is the case in Switzerland.

The main tasks assigned to such troops as part of territorial defense include those that, on the one hand, require a large number of personnel and good training, and on the other hand, they do not place high demands on the quality of weapons and military equipment. This is primarily the fight against sabotage and intelligence groups, terrorist groups and gangs, as well as ensuring the establishment and maintenance of special legal regimes, martial law or a state of emergency in the region.

The government can pay for such a service by creating preferential conditions for economic activity - by providing land plots, materials for construction and business development free of charge and at extremely favorable prices, in the form of various banking and tax benefits, in other forms. As an exception, cash payments for certain types of service are possible.

The primary organizational basis can be a military industrial settlement (small town, village, village). Each such settlement is assigned a zone of responsibility, within which the personnel residing in it solves the tasks of territorial defense assigned to it.

The requirement of economic autonomy assumes as the main entrepreneurial activity carried out on the scale of both individual families and the settlement as a whole (a collective enterprise can be the economic base of such a settlement). As key areas of economic activity are possible agriculture, transport, processing industry, as well as logging.

Depending on the number of personnel recruited by the settlement in the territorial troops, we can talk about the villages (villages) of the company, battalion and regimental scale, which should be able to recruit people who can be equipped with a company, a battalion and a regiment.

Territorial troops must have the types of weapons that are necessary to solve the tasks assigned to them: light and heavy small arms, lightly armored vehicles, off-road vehicles. Based on the specifics of the tasks, this may be weapons and military equipment of obsolete models, currently available in abundance in the warehouses of the Moscow Region.

The total number of such settlements and their inhabitants is determined by the needs of full-fledged staffing to ensure the solution of all tasks of territorial defense. If within one military district, in order to achieve the required number of personnel, territorial troops must have about 100 – 150 thousand people for an extraordinary period, then the total amount of residents of military-industrial settlements in the district may be 400 – 500 thousand people living in 50 – 80 villages (villages). For our huge districts, this is quite a bit, especially if we consider the large number of abandoned military camps on the balance of our MO.

That is, in essence, it is about recreating the Cossacks as a real armed support of the state instead of its modern imitation.

The limited length of the article does not allow for a more or less complete assessment of the economic and operational effectiveness of such a concept. Only the following positive aspects can be noted:

1. Quite numerous contingents of genuine professionals, literally from childhood, appear.

2. The life of such settlements will be entirely connected with military service, which will become the meaning of their existence, forming a specific way of life. As a result, there will be a special class (and maybe a nationality), inextricably linked with the military service to the state. The mentality of its members, formed by the specific highly patriotic environment of educating young people, will make this estate one of the most reliable pillars of the state.

3. The cost of maintaining such a Cossack is incomparably less than the conscript and especially the contract.

4. The problem of recruiting troop contingents will be solved, primarily to solve the tasks of territorial defense, as well as others.

Fears that weapons and military equipment may fall into unkind hands should not be regarded as serious, because today there are a large number of bases and warehouses with weapons and military equipment, for the protection of which in conditions of lack of troops, the Defense Ministry is forced to resort to the help of civilian organizations. So really the Cossacks who are in the service of the state will be less reliable custodians of this property than private organizations.

Ctrl Enter
Noticed oshЫbku Highlight text and press. Ctrl + Enter
We are
Military reform as an integral part of the security concept of the Russian Federation: Systematic dynamic assessmentDoes the Russian Cossacks have a future?
Military Reviewin Yandex News
Military Reviewin Google News
245 comments
Information
Dear reader, to leave comments on the publication, you must sign in.