April 8 2011
21
Ambitious development of the United States in the field of creating innovative martial infantry kits, called the Land Warrior, initiated the development of similar kits in Europe. In particular, the development of the IdZ project began in Germany, and in France - FELIN. In fact, both of these sets, like a number of others currently being developed in Europe, follow in their development the American concept aimed at integrating the fighter into a digital battle management system. More detail, let's stop our eyes on the French FELIN outfit, which attracted the Russian generals and was purchased by a small batch to conduct combined-arms tests.


France and Germany began developing their own projects immediately after the United States, back in 1996. They tried to test the first prototypes during the fighting in Yugoslavia, but due to the low efficiency of the kits, funding for their creation was completed. However, after the units of these two countries joined the military operation in Afghanistan, the development of sets of equipment resumed with a new force.

Already in 2003, the French armed forces in the course of the tender gave preference to Sagem, which began developing the first-generation FELIN-I outfit kit. FELIN - Fantassin a Equipement et Liaisons Integres in French means "Integrated infantry equipment and communications." FELIN is a high-tech set of individual equipment of the soldier - the so-called "set of the soldier of the future." According to the initial plans of the French Ministry of Defense, by the end of 2010, troops were to receive more than 30 000 of such kits, 22,5 thousands were to be sent to armor 20 infantry regiments, 9 000 were to receive armored troops, artillery and engineering troops.

The 50 first outfit prototypes in September 2007 were sent to the French peacekeeping contingent in Afghanistan. The weight of the complete set of equipment, taking into account electronic equipment (radio, video and infrared cameras, navigation instruments, control unit), weapons, ammunition, uniforms with body armor and batteries, the helmet is approximately 25 kg. The kit must be presented in 3 different configurations. Each infantry regiment should receive 1000 of such kits. 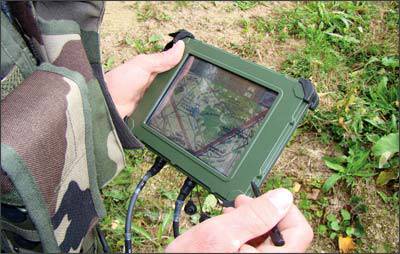 At present, three sets of equipment are ready and tested: for ordinary soldiers, the squad leader and the platoon commander. In addition, all the equipment included in the kit is divided according to its purpose and type of action into 3 groups: individual, special and collective use.

- “Electronic Vest” - an optoelectronic and other radio equipment system consisting of a personal computer, a GPS receiver, communications equipment, etc.

- “Wearable electronic platform”, in fact, is the “heart” of FELIN and includes radio engineering and optoelectronic devices from the “electronic vest”. The components of a computer platform have an open architecture, which allows, if necessary, to include in its structure additional or new types of electronic equipment, this platform uses the USB 2.0 interface.

- Personal weapons fighters. The main weapon of soldiers using the FELIN kit is the FAMAS assault rifle, but in addition to it, a lightweight MINIMI 5,56-mm machine gun, a PAPOP dual-use small-arms gun that combines an 30 mm sub-barrel grenade launcher and an 5,56 mm assault rifle or a sniper rifle can be used as needed. rifle FRS2 caliber 7,62 mm with appropriate sights, including infrared. The FAMAS rifle in this set of equipment received a small-sized video camera that allows you to translate the image into the observation and information collection systems of the squad and platoon commanders. 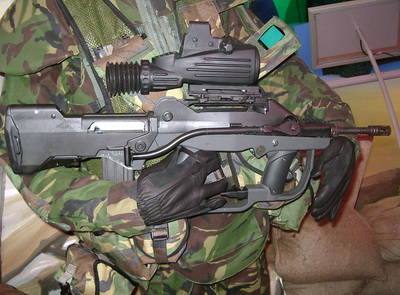 - Combat helmet, consisting of 3-x components - a protective combat helmet with the possibility of mounting the front transparent screens, communication systems and an optoelectronic system. Combat helmet received a built-in protective mask for its use in cases of use of weapons of mass destruction by the enemy. The mask allows the soldier, without removing it, to take food and water (the respiratory system of the mask can use either a regeneration filter balloon or an air balloon). The fighter’s communications system is integrated into the combat helmet, but can also be used separately. The optoelectronic system consists of a helmet-mounted video camera, an information display based on OLED technology (displays graphic, textual, video information coming from a PC, a video camera, or other information sources), as well as the FELIN communication system, which allows for the exchange of information between military personnel and unit commanders at the level squad and platoon. Implemented audio conferencing right on the battlefield. The radio communication system has the following functions: a “alarm button” of a soldier, which gives a signal to the unit commander, a channel for autonomous data transmission, and a communication module for communicating with the higher command is provided for the unit commander. This communication system is based on proven and widely used civilian DECT technology.

The collective subsystem includes: a system for recharging the batteries from the equipment kit; family of armored combat vehicles, intended for use by units equipped with the FELIN equipment kit - AMX-10P, VBCI and VAB.

As planned by the creators of the equipment, soldiers dressed in FELIN will always know their exact location and location of their comrades on the battlefield, and thanks to the special “human-machine interface” of the equipment, they can fire from their weapons at an invisible target, for example, protruding from behind the shelter or the corner of the building.

Also, the equipment kit received a non-standard microphone and headphones with the possibility of vibration. These headphones are fixed on the body below the ear, the soldier perceives information from vibrations transmitted to the zygomatic bone, and then to the inner ear. This solution allows even during the battle not to raise your voice when communicating on the radio. 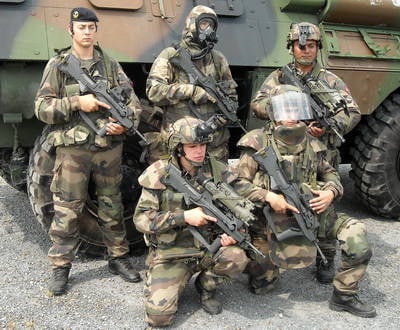 In many ways, the French equipment kit coincides with the Land Warrior Land Fighter kit, designed to equip US troops and is already being tested in Iraq. Although there are quite significant differences. The US kit provides all tactical information, including digital maps with plotted troop positions to any of the unit’s military personnel, while at FELIN only platoon commanders, branch commanders and ordinary soldiers have no access to detailed tactical conditions.

Currently, the General Directorate of Armament of France (DGA) has ordered the Sagem 22 588 FELIN equipment kits, the total cost of the order has exceeded 1 billion euros, which allows us to estimate the approximate cost of the set - about 45 000 euros. Under the terms of the contract, 1009 kits FELIN will go into service with the French army in January-March 2010, and by the end of 2010 the army should receive about 3000 similar kits. It is expected that the complete delivery of equipment kits to the troops will be completed by 2015, and the same year, it is planned to start work on the creation of the FELIN-II kit.

I would like to believe that the FELIN equipment purchased in France will help and advise a number of design solutions to the domestic defense industry to create the best domestic set of equipment for the soldier of the future. While such kits are already being fully adopted in Western countries, in Russia the search continues for the most suitable solution. The Barmitsa complex presented earlier did not suit the military with its extreme weight in 40 kg. The most promising is the “Warrior” equipment kit, which took into account the shortcomings of previous developments, however, it is not known when this equipment kit will be delivered to the troops in sufficient quantities.

Sources used:
nvo.ng.ru/forces/2008-09-26/6_france.html
inoforum.ru/inostrannaya_pressa/sovremennaya_ekipirovka_pehotinca_i_perspektivnye_razrabotki/
lenta.ru/news/2009/11/26/felin/
Ctrl Enter
Noticed oshЫbku Highlight text and press. Ctrl + Enter
We are
Soldier systems under the blows of the winds of war (Part of 1)Modern infantry outfit and promising developments
21 comment
Information
Dear reader, to leave comments on the publication, you must to register.