A few questions on the hot topic 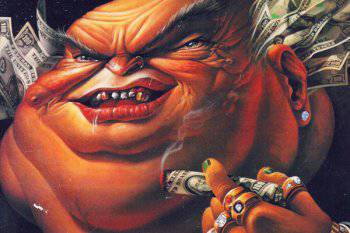 Today it is clear to all sensible that capitalism in Ukraine in the format of “Western capitalism” did not take place for the simple reason that the “golden age” of Western capitalism unfolded on the feudal legacy, using cheap and super-cheap raw materials that the West acquired through ruthless colonial exploitation of the third world. The African continent, Southeast Asia, Australia, India, Small and Central Asia, Latin America - all of them were, and the majority and still are, raw material donors and a source of super cheap labor for Western capital. Consumer well-being of the western man in the street - this is the price of sweat and blood of the inhabitants of the third world.


Citizens of the former USSR and Russia, who are hungry for consumer well-being, should be remembered that post-Soviet capitalism, which does not have colonies with gratuitous raw materials and workers, will never provide the residents of the former USSR with a “middle class” and a European level of consumption. They will have only a wild stratification of society, unemployment, class struggle, moral and cultural degradation. What happened after the collapse of the USSR, when the plague of capitalism struck the post-Soviet space.

The newly-born capitalists were eager to join the first thousand of the “golden billion” with all the fibers of a dirty soul. In the frenzy of the collapse of the superpower of the USSR with impunity, they already saw how they in the Bahamas, Canaries, Seychelles, Cote d'Azur with their “cottage neighbors” - the Rothschilds and the Rockefellers - are discussing the fate of the world. To do this, it was urgent to get hold of the billions "acquired by overwork" and enroll in the world clan of multi-billionaires. But there were no colonies with slaves at hand ... Therefore, the impetuous colonial robbery of the “wicked sovdepov economy” began, the predators tore it, not constraining themselves with anything, in full accordance with the “ethics” of capitalism. Chaos, blood and violence flooded the 1 / 6 part of sushi.

Nishtyaki tolls on the territory of the former USSR were unevenly distributed. In the USSR, a part of the republics, which came to socialism from the Middle Ages, was still only building its economy and leading a decent life at the expense of the all-Union budget, from which the development of their branch economies was subsidized. In these republics, industrial and industrial resources were quickly looted, and among the suddenly impoverished population, first civil unrest began, and then civil wars. Tajikistan, Kyrgyzstan, Georgia, Azerbaijan, Armenia, Uzbekistan, Kazakhstan. These republics today have become the source material for the strategic tasks of the West to destabilize the post-Soviet space.

The richest Soviet legacy inherited by Ukraine from the USSR was enough for twenty-three years. For twenty-three years, jackals tore, tormented, and taken away industry, education, science, and agro-industry, until they threw the richest republic into the quagmire of the Middle Ages — poverty, unemployment, hatred, and neo-Nazism. It was in Ukraine that the West gradually formed a new neo-Nazi regime for Eastern Europe by the forces of a local oligarchy for twenty years. Of course, it is primarily aimed against Russia, but its readiness and capabilities will be checked first on Moldova or Hungary, and, well, Romania. Violence against Transnistria is not excluded. In case of the victory of the Nazis in Ukraine, training camps for terrorists and saboteurs of Slavic origin will also be organized for "work" in the border regions and the edges of Russia.

Today in the post-Soviet republics - darkness and hopelessness. The population is divided and marginalized, there are no leaders capable of bringing the truth to the people and giving a healthy unifying idea and program the only correct way out of the disastrous situation. And there is no republic that could become a leader, showing its example by ideological cohesion in society, the absence of marginal segments of the population and stable positive processes in the economy.

Only Belarus stands apart among the former Soviet republics - as the Brest Fortress ...

The Euro-Nazi insurgency in Ukraine, organized and sponsored by the Ukrainian oligarchy, with the active support of the West, shows that a similar process will be consistently activated in all post-Soviet marginal republics. The turn will come to Russia, which already has on its territory a powerful “fifth column, and not only in the person of accomplices (liberal media and other NGOs), but also in the person of oligarchic capital, prikopavshego all its assets in the West.

It is ridiculous to talk about some kind of "nationally oriented" oligarchy. Any oligarchy primarily focuses only on the preservation and multiplication of its assets invested in the most reliable currency and hidden in the most reliable bank. For oligarchy, patriotism is synonymous with losses and ruin. The Ukrainian lesson showed that it is the local oligarchy that is the most influential and active agent and conductor of Western plans for the colonization of the post-Soviet space. At the same time, both the blackmailed and the West-promoted post-Soviet oligarchy created a wide and numerous extensive network of agents of influence throughout the “vertical and horizontal of power”.

Today, the Russian oligarchy in its moral and moral qualities is no different from the Ukrainian. It is the most dangerous internal enemy for Russia as an independent democratic state and for the Russian people as a culture-forming ethnos. For the time being, Russia is saved by the enormous potential of the “sovdepov economy” dying too slowly under the boots of the liberals and the enormous amount of raw materials that are in demand on the world market. But once everything ends ... For the last thirteen years, “Russian business” has sold raw materials for more than two trillion dollars (or ninety trillion rubles). With this money, Stalin would build another superpower and put the entire Western world at attention.

Western aggression against the post-Soviet republics will inevitably increase. The crisis is pressing, and the period of sweet-talked assurances and teachings about how to build “liberal democracy and a market economy” correctly, ends. An example of a bourgeois revolution in Ukraine urges Russia to choose: either to finally surrender Russia to local oligarchs as colonial governors of the West, or, taking into account past mistakes, to move from a liberal oligarchic market to building a people's democratic republic with a self-sufficient economy. But for this to happen, Russia must first formulate its idea and ideology, which the overwhelming majority of the people will support.

Russia, a superpower that has turned into a peripheral state after the collapse of the USSR, must find the meaning of its existence, at least for the next hundred years. The meaning of existence is an idea, an understanding of what to do today and what to prepare for tomorrow, nationwide, this is a political platform that unites all segments of the population and sets the direction for development.

Today in the Ukrainian conflict, oligarchic Russia is trying to defend its sphere of influence and its interests in the post-Soviet space. But let's imagine that the South-East of Ukraine was federalized and concluded a political agreement with Russia. What will benefit these new federations? What can Russia give them? All industry both belonged and will belong to the Ukrainian oligarchs, because oligarchic Russia itself rests "on the sacred right of ownership" and it is unlikely that it will encourage such a bad example as a raider redistribution of property by new leaders of the neo-federation. Pensions and salaries for doctors and teachers will not grow either (God forbid, they will also decrease). Yes, and the big question is whether from what to pay them, because the pension fund is kept in Kiev banks. Russia will not pay instead of Kiev pensions and public sector wages, and the profits from the territory will be exported to powders, Kolomoisky and Rabinovich.

Yes, the inhabitants of the region will have the right to choose which language to teach them, perhaps they will choose their governors for a while until the Kolomoisky buy them again, but the subsistence level of the people is unlikely to increase. What else will benefit the residents of south-eastern Ukraine? What IDEAS do they go to rallies for and storm the administrations? ..

Another variant. Contrary to its assurances of commitment to the integrity of Ukraine as a state, Russia will take in its composition south-eastern Ukraine, all of whose industry belongs to the Ukrainian oligarchs, and all budget expenditures will go to the Russian government.

The Russian man in the street, who is now tearing up and throwing against Bandera, tomorrow will also zealously scream against taking on the Russian balance of additional social spending on twenty million Ukrainians. After all, the Russian government, in order to “increase revenues,” will immediately announce the “urgent privatization plan” of the entire poor Russian economy. The Russian oligarchy will applaud wildly. After all, the Medvedev government, like a real liberal government, does not know how to make money. It can only spend widely and spells every day and akathists “on the inflow of foreign investments,” and should be earned by “small and medium-sized entrepreneurs,” well, something oligarchs, who sometimes even pay taxes to the government. So, what kind of Russian defense are their unclean, utterly confused Ukrainians calling for, what do they mean by that? And what can oligarchic Russia give them today?

Maybe it’s time for Russia to start cleaning up from the defilement of oligarchism and Western values ​​of liberalism? Without waiting for the “export of revolutions”, to begin to modernize the political and economic mechanism, to focus on the development of a self-sufficient economy, and not to integrate into the “international division of labor” in the form of a raw material colony? And not to invite "foreign investments" in a thin voice, but to turn Russia into an ideologically and economically attractive country - an example for the fraternal peoples of Belarus and Ukraine. And create with them something like the Slavic Union of Republics. This is precisely what the West fears in panic, for it will lose its dominant position in economic and political blackmail. Then Kazakhstan and Central Asia will ripen to the right decisions. They just need a little, but decisively, help with advice ...

Ctrl Enter
Noticed oshЫbku Highlight text and press. Ctrl + Enter
We are
The world we leave, the world we enter, and the world between themWhat you didn't want to know about England
Military Reviewin Yandex News
Military Reviewin Google News
34 comments
Information
Dear reader, to leave comments on the publication, you must sign in.