Crimea is preparing for a referendum: lists are compiled, bulletins are printed 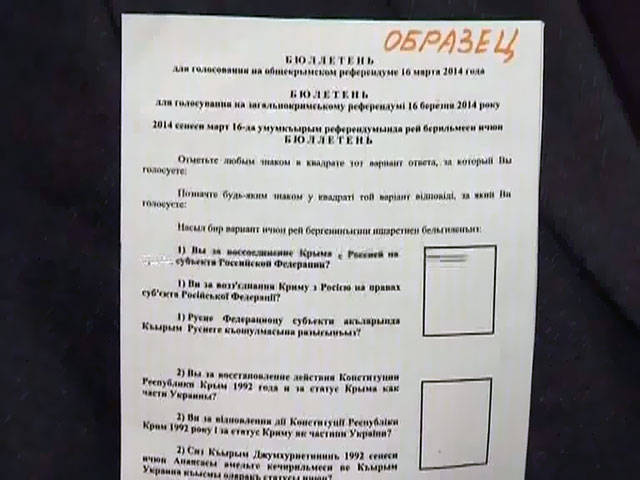 In Crimea, for the Sunday referendum prepared voter lists, and today have already earned election commissions. It was decided: the bulletins will be in three languages ​​- Russian, Ukrainian and Crimean-Tatar. Documents today are sent to the territorial commissions. On the eve of the Crimea declared its independence. What has changed in the laws and how do these changes affect the daily life of the republic?

After the adoption of the Declaration of Independence Crimea ceased to be autonomy. This word is superfluous. The name has become shorter, now just the "Republic of Crimea". Deputies of the Supreme Council severed all legal ties with the illegitimate authorities of Ukraine, changing the status of the peninsula. It does not hide the fact that full independence is not the goal. In a referendum, Crimea chooses — for Russia, according to opinion polls, the majority. The declaration will allow to reunite legally, without the permission of Kiev.

“We adopted the Declaration of Independence. We retain the status of a republic, and then we enter as a republic as a subject of the Russian Federation. It’s impossible to return to Ukraine,” said Vladimir Konstantinov, chairman of the Supreme Council of the Republic of Crimea.

The speaker called the Declaration of Independence not the most important document adopted today. More importantly - guarantees for the Crimean Tatar people, enshrined in law. He gets the rights that he never had in Ukraine. "This is a guaranteed representation of them in all government bodies. We give such a guarantee to them. Secondly, we guarantee the development of language, culture and monuments. We have written all these things and fix them in the law," says Konstantinov.

Election commissions in the Crimea began work. Compiled voter lists. Printed ballots, which will be delivered to the polls one day before the voting. Questions in three languages ​​- Russian, Ukrainian and Crimean Tatar. In order to prevent saboteurs in the autonomy, the people's guards patrol the stations. On the border with Ukraine are the Cossacks.

This is a strong point at the forefront. Cossacks camped here. They spend the night in tents in turns. Because the duty is conducted around the clock. All trails are monitored. In the forests, armed detachments of Cossack volunteers keep strongholds and control the administrative border, which may soon become a state border.

Ataman Ivan Vasilyevich passed a dozen hot spots. Now the Cossack patrols in the north of the Crimean peninsula bypass. “The Cossacks have always been defended,” he says. “We protect our land.”

In the Cossack camp for lunch borscht and bread with bacon. The local people themselves organized the supply. Cossack shows glass jars with all kinds of food. "Here are the seals. The locals feed us," he says. “I help, as much as I can. We should be with Russia,” says a woman standing next to a Cossack.

The Ukrainian army is rapidly thinning. Soldiers and officers go to the side of the Crimean people. Of the inhabitants of the Crimea, who until recently served in the army of Ukraine, entire units were created. Flagship fleet the naval forces of Ukraine "Getman Sagaidachny", who escaped to Odessa, was left almost without a crew. Sailor Maxim Knyazev is one of those who refused to serve the new government.

“When we went on a hike, we left one country. Then we came to another. There are people on the ship who want to return to the Crimea. They don’t want to serve Ukraine. But all their attempts to leave the military unit are stopped in every way,” says the senior sailor frigate "Getman Sagaidachny" Maxim Knyazev.

The economy of Crimea is stable, all pensions and salaries are paid on time. The republic nationalizes several state-owned enterprises that are engaged in the extraction of resources. In particular gas. Crimea now owns railways. The interests of private owners will not be affected.

"Citizens of Ukraine, Crimeans, who today have state certificates of land, have the right, certificate of ownership of apartments, will be able to re-register their property rights in the relevant registries under the simplified procedure," said Rustam Temirgaliyev, first deputy chairman of the Council of Ministers of the Republic of Crimea.

The authorities announced the plan for Crimea to enter the ruble zone. This will happen in stages. Here a few months will be two currencies - the ruble and the hryvnia.