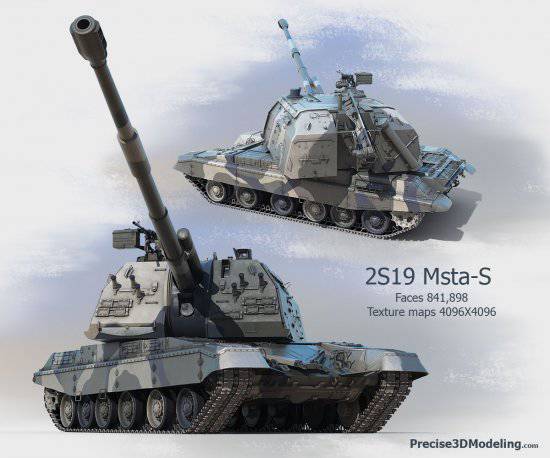 In the early 80-ies GRAU issued led L.I. The Gorlitsky Design Bureau of the Ural Transport Engineering Plant (UZTM) in Sverdlovsk has new requirements for a 152 mm self-propelled howitzer for replacement in the troops of the 2C3 Akatsia howitzer. The artillery was supposed to be universal - for use both on self-propelled guns and in towed artillery. At the same time, the chassis of the new chassis was planned to be unified with the chassis of the main tankswho were in service and were in production.

The main developers of the ACS were: UZTM (now FGUP “Ural Transport Engineering Plant”) - the lead developer of the 316 Object chassis and the machine as a whole, and the Tula Instrument Design Bureau (now NPO “Precision”) - the developer of the combat compartment, Design Bureau of the plant # XXUMX in Sverdlovsk - swinging part. The chief designer of the installation, designated GRAU 9C2, was approved by Yu.V. Tomasheva.

In 1989, a new self-propelled gun was adopted by artillery regiments of motorized rifle and tank divisions of the Soviet army under the designation

2С19 "Msta-S" (C - self-propelled, as opposed to the towed 2А65 "Msta-B" gun, put into service in 1986 year and having a swinging part similar to 2С19). In the same years, at Uraltransmash, they created a special simulator 2X51 “Bunkering” for training calculations for ACS. The first series of new self-propelled howitzers were produced at the Uraltransmash plant. Soon, a plant was built in Sterlitamak (Bashkiria) specifically for the production of machines in the quantities necessary for the Soviet Army. 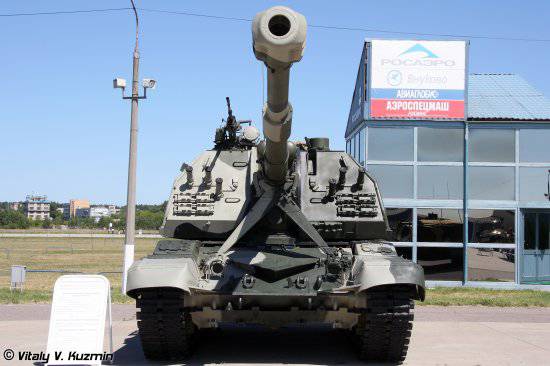 "Msta-S" is designed to destroy tactical nuclear weapons, artillery and mortar batteries, tanks and other armored vehicles, anti-tank weapons, manpower, air defense and missile defense, command and control facilities, as well as to destroy the enemy’s fortifications the depth of his defense. It can fire at observable and unobservable targets from closed positions and direct fire, including work in mountain conditions. When firing, both ammunition shots and those coming from the ground are used, without a loss in rate of fire.

The armored body of the ACS is similar in design and geometry to the body of the T-72, with some exceptions. So, the self-propelled gun booking is weaker than that of the tank: the frontal part does not have a combined reservation and is made of homogeneous bronestali. The upper (underbody) hull sheet is designed for a shoulder strap with a diameter of 2444 mm, and the lower part of the hull is different due to the use of T-80 in the suspension of the torsion shafts and balances. The case contains the engine, transmission, control drives and suspension. 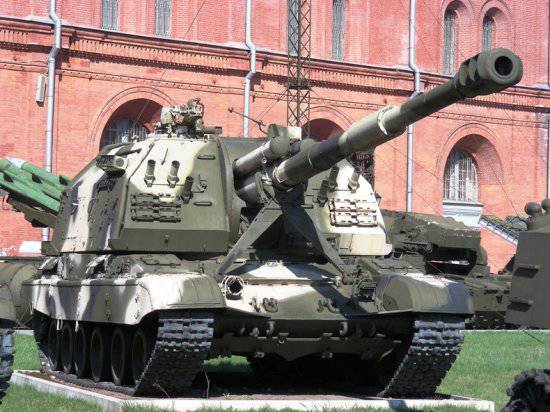 The undercarriage of the ACS is similar to a tank (T-80) and consists (with reference to one side) of six road wheels, a guide wheel with a track tension mechanism, a drive wheel with removable gear rims and five supporting rollers. The suspension is independent with long torsions, which is why the corresponding rollers of the right and left sides are not coaxially (the rollers of the left side are shifted forward 110 mm). The first, second, and sixth rollers have adjustable telescopic shock absorbers that stop during firing to dampen vibrations. This eliminates the need for stabilizing coulters. The caterpillar 580 mm width, equipped with rubber-metal hinges and rubberized treadmill, is also borrowed from the T-80.

The tower is welded from rolled armor plates. It contains: 2А64 howitzer with guidance and aiming system, automated projection and storage system for shells (includes a conveyor for feeding projectiles from the ground, laying 6ЭЦ19 with programmable output and an executive mechanism for coordinating angles with feeding projectiles from laying to a gun), an onboard power unit AP-18D with an autonomous power supply system, filtering equipment, communication facilities (internal telephone, external wired and radio) and a system for sealing the breech of the howitzer to prevent gas combat compartment. Mass of the turret without ammunition - 13500 kg. 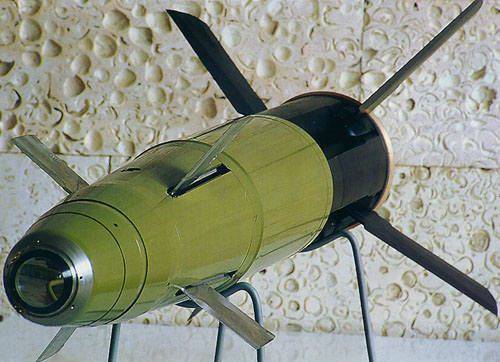 The 152-2 rifled 64-mm howitzer has a separate-cartridge loading. Shooting: 3HX45O type active radar jamming projectiles (at a distance of 24700 m), smoke detectors targeting 3VDTS 58 rounds, as well as special ammunition. It is possible to use all types of standard D-3 and 72C3 howitzers ammunition, as well as guided projectiles with 73OFXNNXX Krasnopol laser illumination as part of the 3BOXF61 shot. Highlighting targets by advanced artillery observers using 28900D3 instruments (PP-91), 3023D42, 26000D3 or 3D22300.

The reloading system allows you to fire at any angles of guidance in the direction and elevation of the gun with the maximum rate of fire without returning the gun to the loading line. The mass of shells exceeds 42 kg, therefore, to facilitate the work of the loader from the pack, they are fed automatically. The mechanism for the supply of charges - semi-automatic type. The design of the ammunition racks allows you to place all the standard types of projectiles, and the search for the desired one and control of the entire loading process is carried out by the control system of the loading mechanism. In addition, it counts and records the number of shots of the corresponding type. The delivery of the selected projectiles and charges to the gun is carried out by two independent conveyors. Each of them is serviced by its own loader, which increases the rate of fire. The presence of additional ammunition conveyors from the ground allows firing without spending internal ammunition. When translating the unit to the stowed position, the additional projection conveyor is folded and fixed on the turret, while the other is retracted inside. The spent cartridges are automatically ejected through the hatch under the barrel of the gun, which significantly reduces the gas content of the crew compartment. 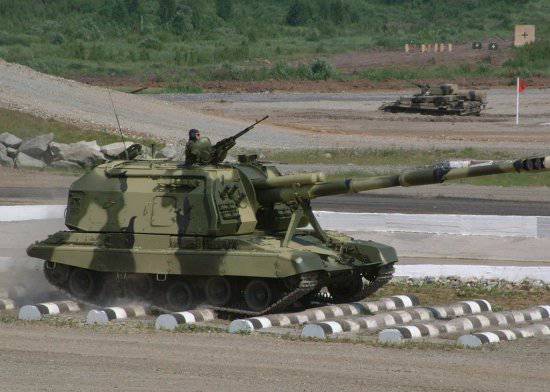 The ACS is equipped with two sights: panoramic (1P22), located in the swiveling armored rooftop of the tower, and direct aiming (1P23), whose window is located on the front plate of the tower. The first of them has 3,7-fold increase and automatic horizontal stabilization of the field of view, provided that the roll of the machine does not exceed 5 °. In the stowed position, the scope is retracted behind the protective curtain to the right of it. The 1P23 scope increases 5,5 times within the range of pointing angles from -4 ° to + 55 °.

The 2Е46 howitzers are electric: vertically - automatically, horizontally - from the control panel. Automatic recovery of the elevation angle after each shot simplifies the work of the gunner. When firing, he performs only one operation - he retains a panoramic sight on the aiming point with a control device. In critical situations, the commander of the machine has the ability to independently direct and fire a gun using duplicate equipment. When power is turned off, a backup system is used for manual loading and guidance. Msta-S is equipped with a 1B122 firing data transmission and transmission system (wired and radio) to a distance of 500 m. The control over guidance and coordination of battery interaction is carried out by a fire control machine, a commanding or senior officer.

A machine gun anti-aircraft gun with a remote control and a PZU-5 sight (PZU-7) mounted on a commander's turret and intended for self-defense against light armored vehicles, helicopters and airplanes, similar to that used on T-64А / B / BV and T-80UD tanks . It is controlled remotely from the tower. The NSVT-12,7 “Rock” machine gun has a target range of 2000 m and 700-800 firing speed per minute at vertical guidance angles from -3 ° to + 70 °. Its ammunition consists of five tapes of 60 cartridges each.

To ensure the operation of ACS systems when the main engine is turned off or failed, an autonomous power supply unit АП-18Д - a gas turbine with a power of 16 kW is used. The time of its continuous operation is 8 hours.

Crew members are chatting with the help of the 1B116 intercom equipment for seven subscribers. External communication is carried out with the help of VHF radio station P-173 (range up to 20 km). 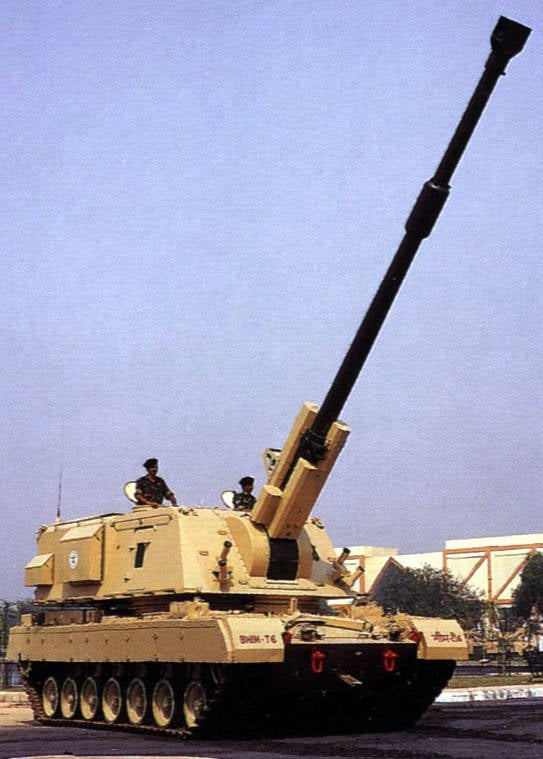 The 2C19 self-propelled guns are organized into OBAC Kapustnik, which is the basic unit for the formation of any artillery formations.

For the first time, Msta-S was presented to the general public at the air show in Zhukovsky in August 1992 of the year, then at the IDEX-93 exhibition in Abu Dhabi (United Arab Emirates) in February of the 1993 year, where it demonstrated excellent running and fire qualities. In particular, when shooting at a range of 15 km, forty Krasnopol shells were hit by 38 targets. 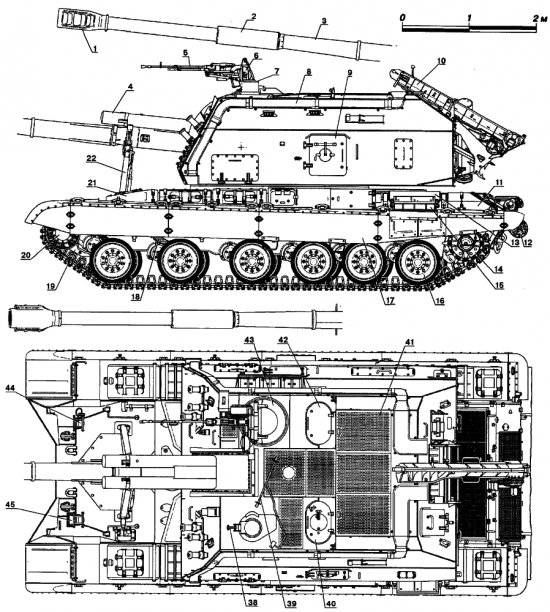 After upgrading the MSA, the self-propelled gun was designated 2C19M.
The howitzer is offered for export, including those with an 155 mm caliber artillery piece (2C19M1 Msta-S), which can fire Krasnopol-M projectiles, as well as Western ammunition of the same caliber. Such a machine was first presented at the Eurosatory 2000 armament exhibition at Le Bourget (19-23 June 2000 of the year). Experts estimate the cost of one ACS at 1,6 million dollars.

* for OFS with gas generator - 28,5 km
** A B-46-6 engine throttled to 780 hp can be installed.
Ctrl Enter
Noticed oshЫbku Highlight text and press. Ctrl + Enter
We are
American self-propelled howitzer M37On the way to the T-80: tank gas turbine engines
Military Reviewin Yandex News
Military Reviewin Google News
27 comments
Information
Dear reader, to leave comments on the publication, you must to register.