Soviet mortars during the war. Part 1 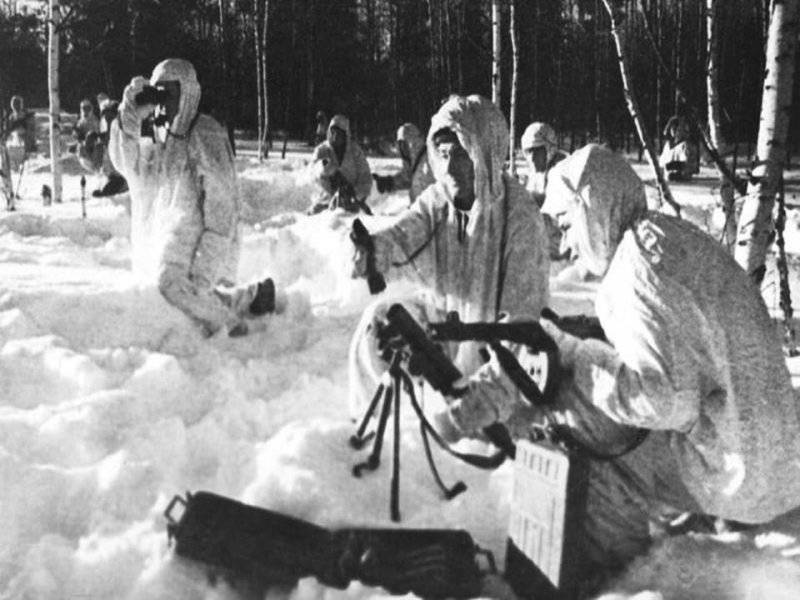 Mortars as a means of "trench warfare" appeared during the First World War. The main features of the modern mortar were formed when the first sample of such weapons Stokes constructions. At first glance, this is a rather primitive weapon, which is a pipe-barrel on a simple two-leg carriage, resting on a flat plate, absorbing the force of recoil into the ground. 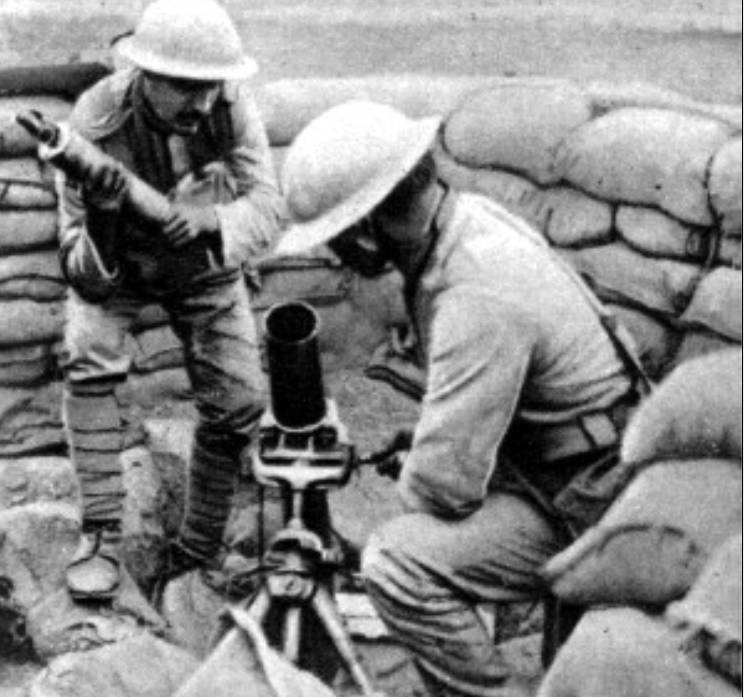 The 3-inch mortar designed by Captain Stokes according to the “imaginary triangle” scheme, which became classical, was created in 1915 year and was originally intended for firing non-fixed chemical mines.

When it hit the target, such a mine broke apart, scattering poisonous substances. Subsequently, mortar mines filled with explosives, streamlined shape, equipped with tail feathers were created.

In fact, the caliber of “three-inch mines” was equal to 81 mm, since the diameter of the caps in the front and rear of the cylinder is 81 mm. A hollow tube of a diameter smaller than a mine — a chamber with fire-transmitting holes — was attached to the bottom of the mine. A blank 12 caliber cartridge cartridge was inserted into the tube in a cardboard sleeve. On top of the chamber, additional powder charges of a ring-shaped form were imposed. The firing range depended on the number of rings, although when firing at the minimum distance the mine could have been used without them. 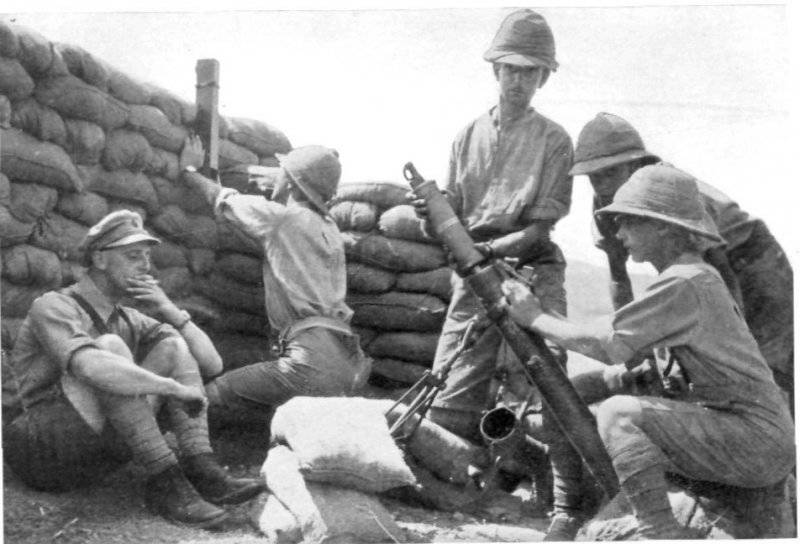 Loading mine was made from the barrel. Mina had a smaller diameter than the caliber of the trunk and freely fell to the bottom of the channel under the action of gravity. Mina stumbled upon the striker head, while the primer-igniter of the hunting cartridge, inserted into the chamber, worked. The ignited powder, burning, developed a pressure sufficient for the powder gases to pierce the shell of the cartridge opposite the fire-transmitting holes. At the same time, additional charges ignited. Under the pressure of powder gases, mine was ejected from the trunk.

Thanks to the ease of loading, a huge rate of fire was achieved for those times (25 rounds per minute), which no mortar or field gun had. Accuracy of shooting, especially with unguided chemical mines, was mediocre, which was compensated by high rate of fire.

In the 20-30 years, the mortar was significantly improved in France by Brandt specialists. Mortar became easier, maintenance and shooting from it greatly simplified. Pointing the elevation in a small sector was carried out using a screw-turning mechanism located on the mount of the sight. New, heavier, streamlined mines were developed, in which not only the mass of the charge, but also the range of flight increased.

The Brandt 81-mm Mortar 27 / 31 was widely used and became a role model. Mortars of this type were produced under license or simply copied, including in the USSR.

Before the war in the USSR, there was an excessive fascination with mortars. The military leadership believed that light, inexpensive, easy-to-manufacture and service mortars could replace other types of artillery weapons.

Thus, under the pressure of the “mortar lobby”, projects of light infantry howitzers were buried, and the Taubin automatic grenade launcher, which proved itself well on the tests, was not adopted.

At the end of 1939, the simplest type of mortar was created - 37-mm mortar-spade of minimum caliber. They planned to replace the Dyakonov infantry rifle grenade launcher. 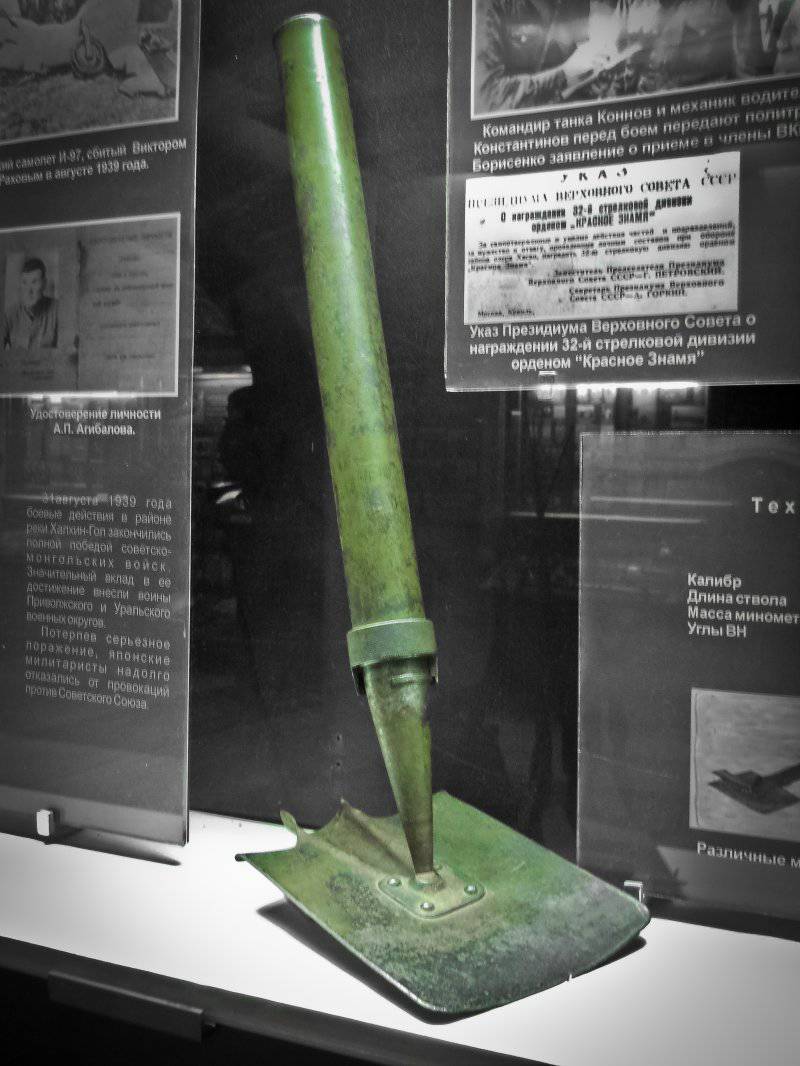 In the stowed position, a mortar weighing about 1,5 kg was a shovel, the barrel of which served as its handle. Mortar-shovel could be used for digging trenches. When firing from a mortar, a shovel served as a base plate. The shovel was made of armor steel.

The mortar consisted of a barrel, a spade - a support plate and a bipod with a cork. The trunk tube is connected tightly with the breech. In the breech pressed the hammer, which was superimposed priming chuck cartridge mines. The tail part of the breech ended with a ball heel, which serves to swivel the trunk with a plate (shovel). The barrel and spade in the hinge connection are made one-piece. To connect the barrel with a shovel in a traveling manner on the breech breech there was a rotating ring. The bipod served to support the trunk and in the stowed position was placed in the trunk. The barrel with a barrel closed with a stopper. Before shooting, the fry was connected to the barrel. Mortar rate of fire reached 30 rds / min. 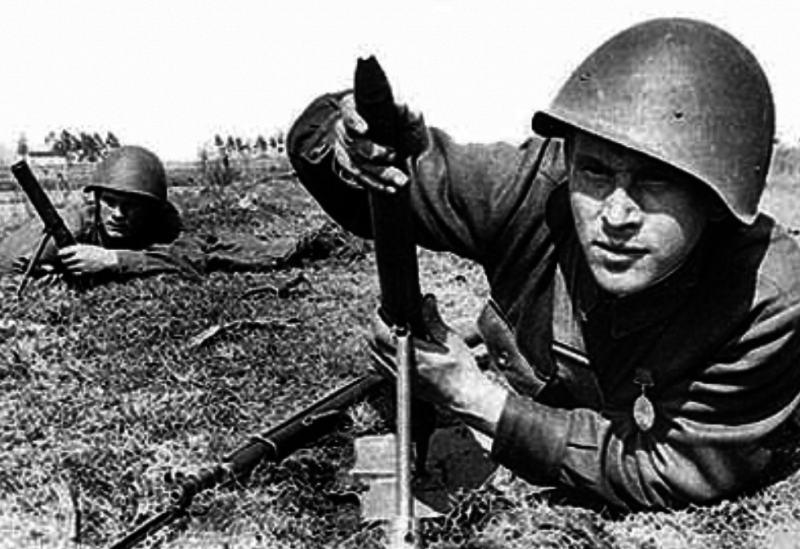 Any sighting devices in the mortar was absent, shooting was carried out by eye. An 37-mm frag mine with a mass of about 500 grams was developed for shooting. Mines were worn in the cartridge belt.

In the winter of 1940, when using 37-mm mortar-shovels in battles in Finland, its extremely low efficiency was suddenly discovered. The mines' flight range at the optimum elevation angle was small and did not exceed 250 meters, and the fragmentation effect was weak, especially in winter, when almost all the fragments stuck in the snow. Due to the absence of sights, the accuracy of the shooting was extremely low, only “disturbing” shelling of the enemy was possible. All this was the reason for the negative attitude to the 37-mm mortar in the infantry units.

At the end of the 1941 of the year, due to poor combat effectiveness, the 37-mm mortar was discontinued. However, it could be found at the forefront of the year before 1943. According to the recollections of the front-line soldiers, it was relatively successfully used in a stable front line after targeting landmarks.

In 1938, the 50-mm rotary mortar was developed by the design bureau of the plant # XXUMX. He was a rigid system with an imaginary triangle scheme. The mortar had a mechanical sight without optics.

The design feature of the mortar was that the shooting was carried out only at two elevation angles: 45 ° or 75 °. Adjustment in range was made by the so-called remote valve located in the breech breech and releasing some of the gases to the outside, thereby reducing the pressure in the barrel.

The elevation angle 45 ° provided the greatest range of fire with an 850-gram mine to 800 m, and with a fully open faucet, the angle of inclination of the trunk at 75 ° provided the minimum range in 200 m. When shooting at all distances, only one charge was used. An additional change in the firing range was also carried out by changing the path of the mine in the barrel relative to the base of the barrel by moving the striker, as a result of which the volume of the chamber was changed. The angle of horizontal guidance without moving the slab to 16 °. 30 firing rate / min. The mortar weighed about 12 kg. 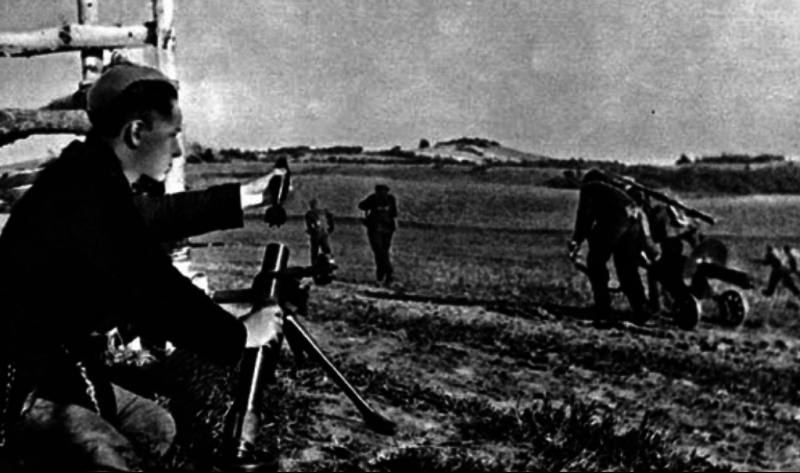 During the operation in parts and during combat use during the conflict with Finland a whole list of shortcomings of a company mortar was revealed. The most significant of these were:

- Large minimum range (200 m).
- Relatively heavy weight.
- Large size, which made it difficult to disguise.
- The remote tap device is too complex.
- The discrepancy of the scale of the remote range crane.
- Unsuccessful location of the outlet in the remote crane, because of this, when shooting, the outgoing gases, hitting the ground, raised dust and thus made the calculation difficult.
- Unreliable and difficult mount sight. 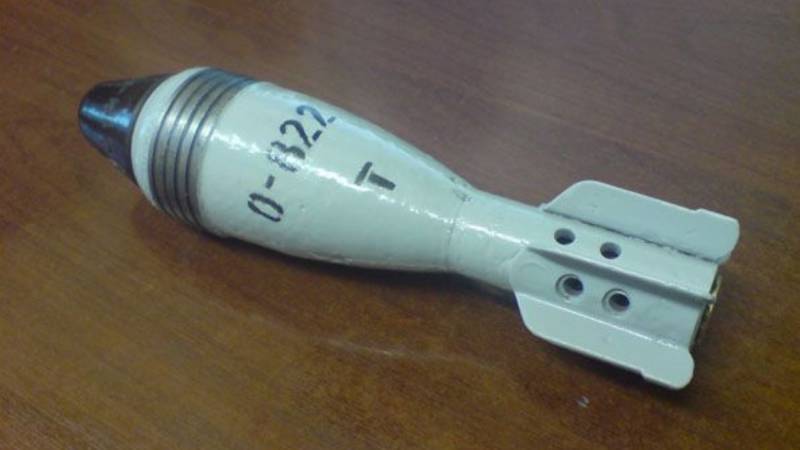 In 1940, a modernized 50-mm company mortar entered service. In the 50-mm rotary mortar arr. 1940, the barrel length was reduced and the design of the remote crane was simplified. This reduced the length of the mortar and reduced the weight to 9 kg. On the stove of a mortar there was a visor designed to protect the calculation from powder gases.

However, it was not possible to eliminate all the shortcomings without a fundamental change in the design of the mortar. Before World War II, more than 30 thousand 50-mm mortars were produced.

During the war, a mortar of the 1941 model of the year was created, which was created at the Special Design Bureau under the direction of designer V. N. Shamarin. It was missing a two-leg, all elements were attached only to the base plate, a remote valve with the exhaust gases up. Mortar plate stamped membrane type. The weight of the mortar in the combat position of about 10 kg. 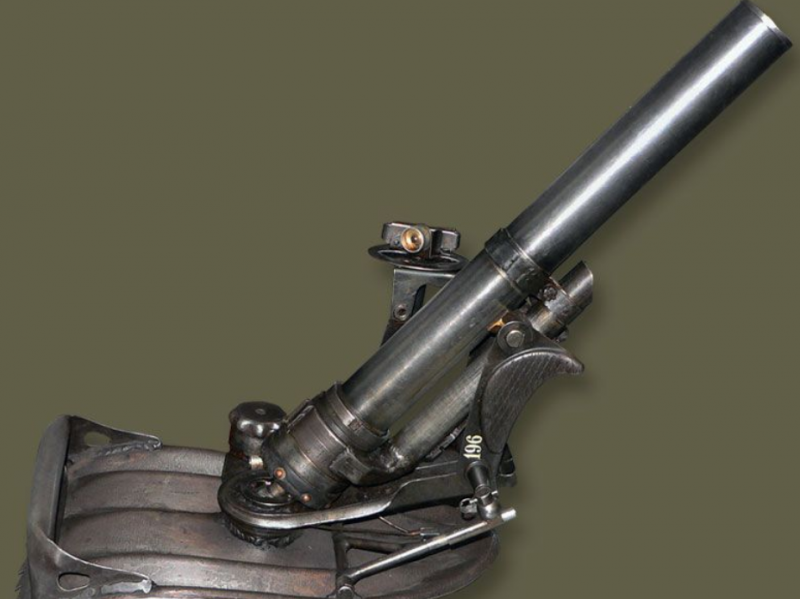 Shamarine mortar compared to previous samples has become much easier and cheaper. Improved performance of the mortar.

Although the range and effectiveness of the fire remained the same, the 50-mm rotary mortar arr. 1941 of the year was popular among the troops, being often the only means of fire support for Soviet infantry in the company-platoon link. 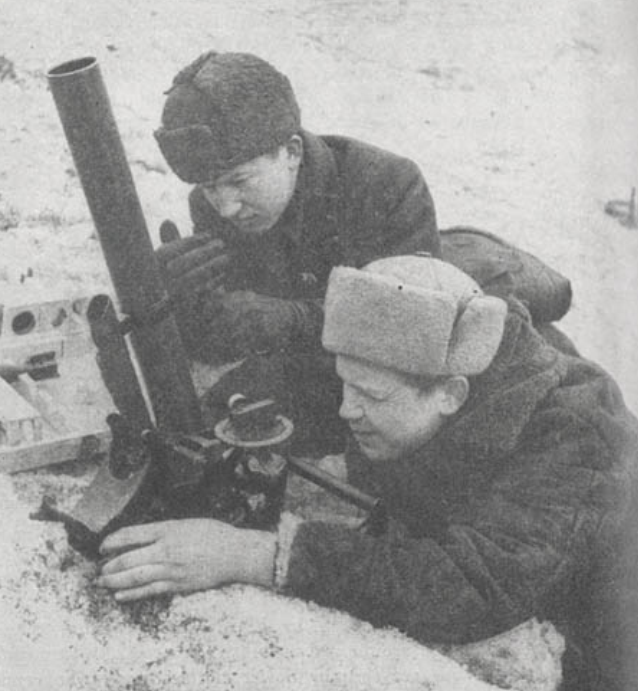 In 1943, 50-mm company mortars were removed from service and withdrawn from the troops. This happened because of their low combat effectiveness and the transition to offensive operations.

In this case, the regular instantaneous head fuse and tail section were removed, and instead of the head fuse, the UZRG-1 fuse was screwed in, which was used in the F-1 and WP-42 manual fragmentation grenades during the war.

In the 1934 year, after studying the Stokes-Brandt mortar, an 82-mm mortar was created in the USSR under the direction of engineer N. A. Dorovlev. Within two years, the mortar was tested and compared with foreign models, and in 1936, he entered service with the Red Army.

The choice of the caliber was based on the fact that 81-mm mortars of foreign armies could be used when shooting from Soviet mortars, while 82-mm domestic mortar mines were not suitable for shooting from foreign armies. But, most likely it was due either to the fear of the designers of mines jamming in the mortar channels, or it was decided to round off the caliber from 81,4 mm to 82 mm to simplify documentation and pre-production. 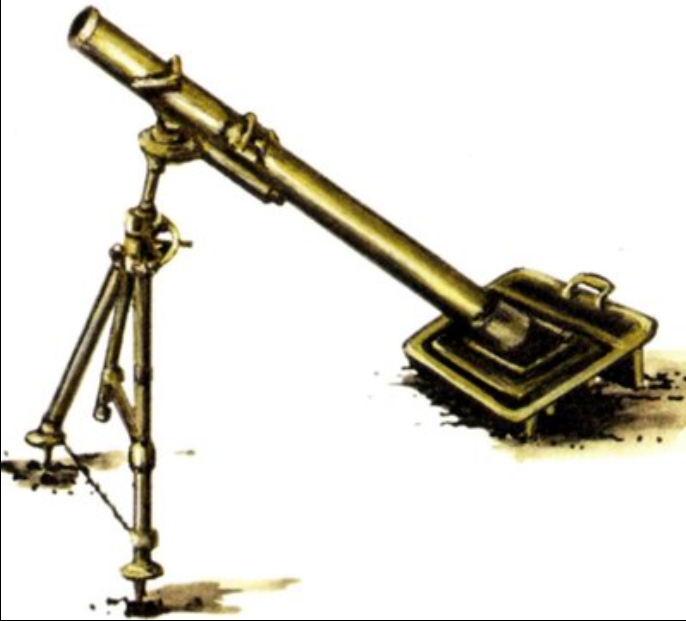 82-mm mortar arr. 1936 was the first Soviet battalion mortar and was intended to suppress firing points, defeat manpower, destroy wire barriers and destroy the enemy’s equipment, located behind cover and inaccessible for flat-fire and artillery fire, and also located openly. 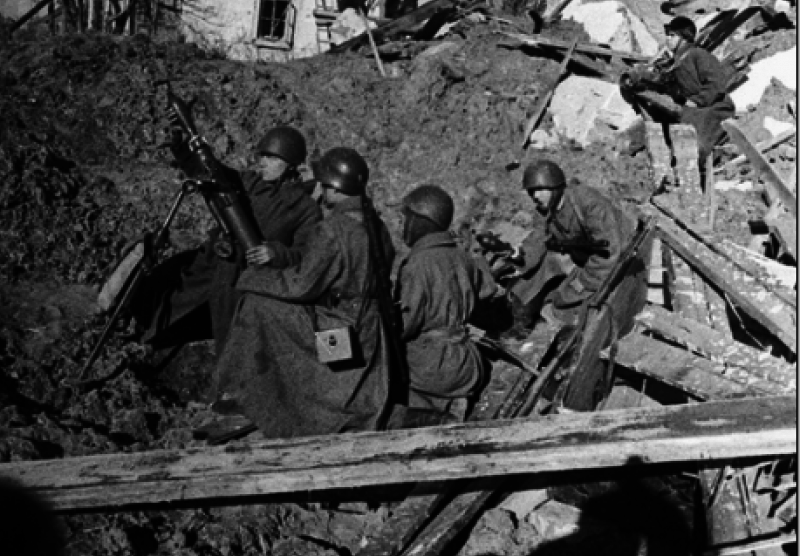 The weapon combined the sufficient effectiveness of the shot with the ability to be carried by infantrymen: the mortar in the traveling position weighed 61 kg and disassembled for carrying into three parts - the barrel (weight in pack - 19 kg), biped (20 kg) and base plate (22 kg). In addition to the mortar itself, the calculation carried ammunition to it - a tray with three mines weighed 12 kg, a pack with two trays - 26 kg. Mortar rate of fire was up to 25 shots per minute, and an experienced calculation could hit the target with 3-4 shots. 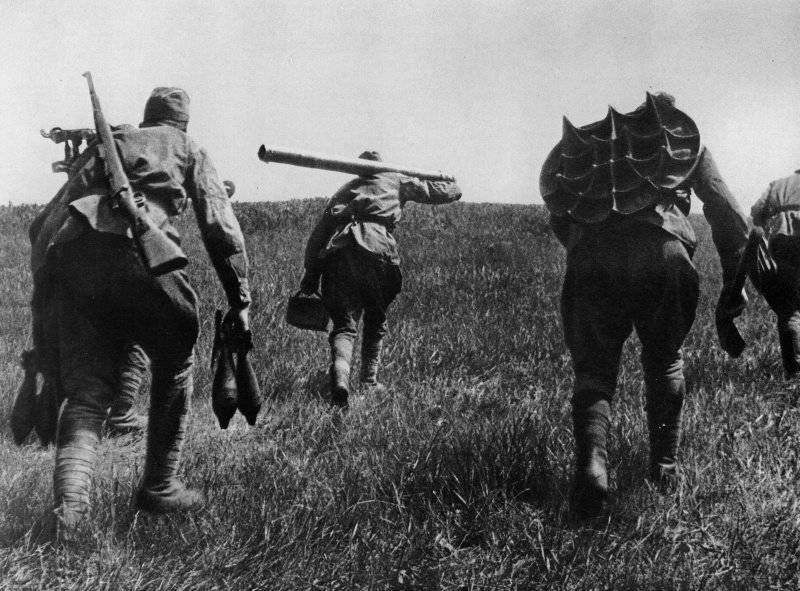 Battle check 82-mm mortars arr. 1936 were held in battles with Japanese troops at Lake Hassan and on the river Khalkhin Gol. In battles on the Khalkhin-Gol river, 52 mortars were used, which accounted for about 10% of all field artillery. Despite the design flaws that emerged during the fighting, such as a small angle of horizontal guidance and the need to disassemble the mortar during the transfer to the battlefield, the mortars deserved a high estimate of the troops. During the fighting, 46,6 was spent thousands of minutes.

In 1937, the design of the mortar was modified to improve manufacturability and combat effectiveness. In particular, the shape of the base plate was changed - the mortar of the 1937 sample of the year became round. 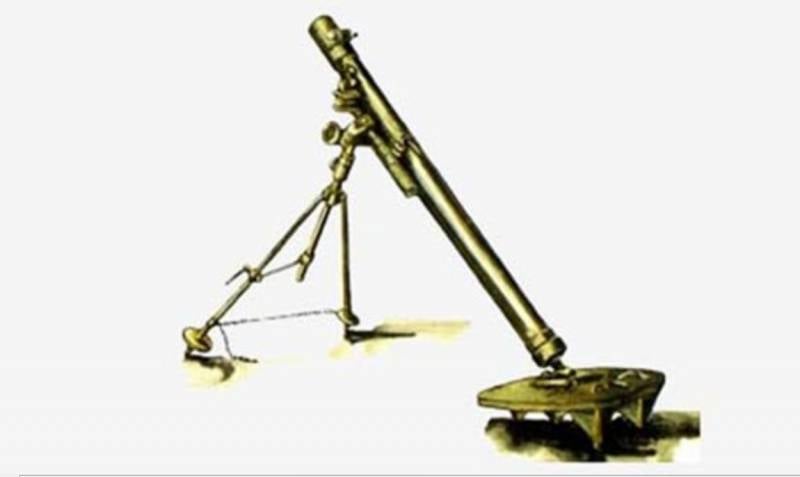 82-mm battalion mortar arr. 1941 was different from arr. 1937, the presence of detachable wheel travel, base plate arch design, as well as a bipedal other design. The wheels were put on two-legs on the half-legs of the legs and were removed when firing. 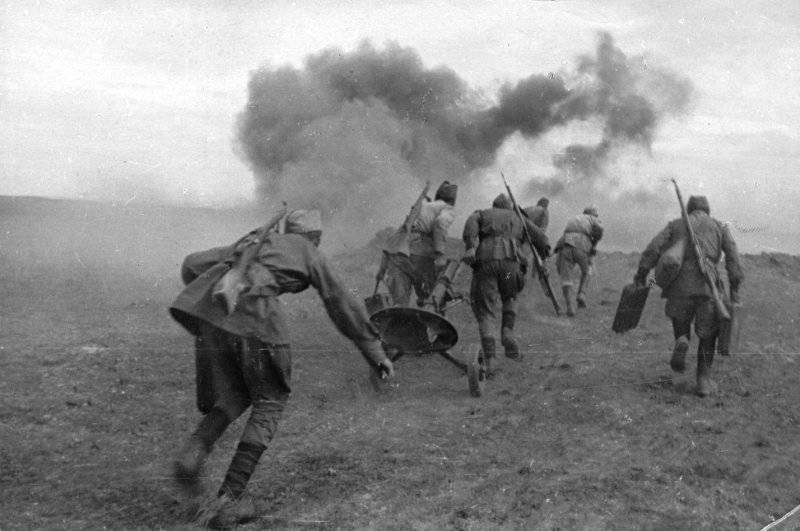 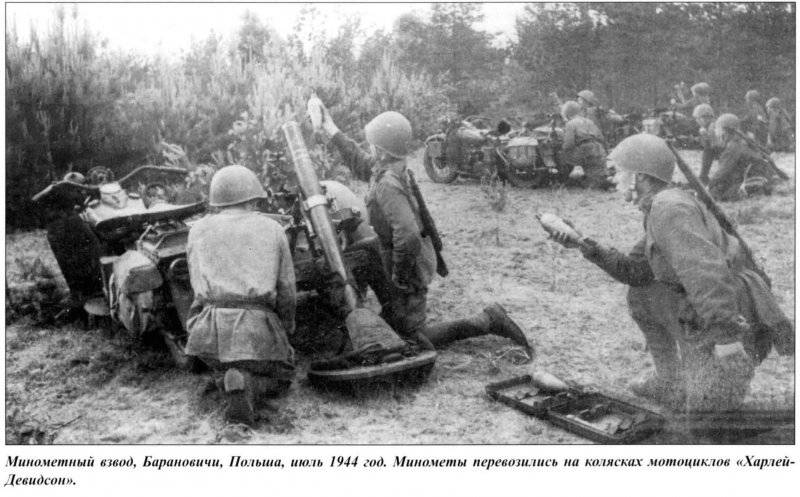 During the war, attempts were made to increase the mobility of the mortar units. Mortars were installed on off-road vehicles, trucks and motorcycle strollers. This became especially relevant after the transition of our army to offensive operations. 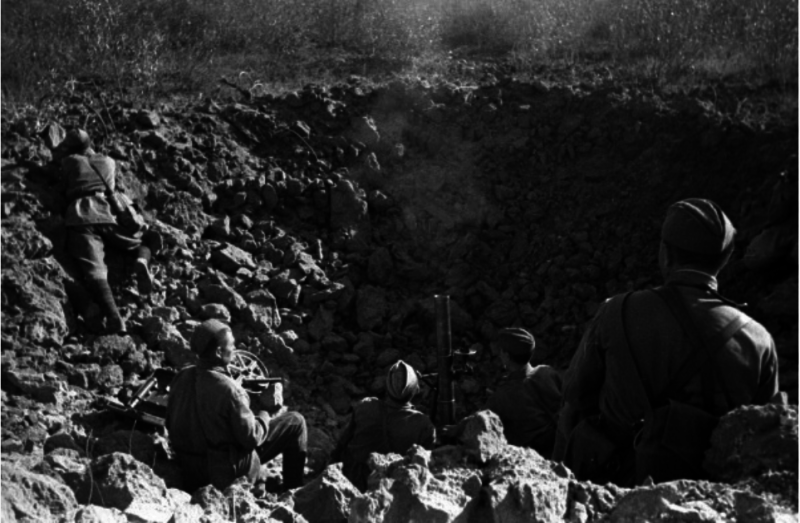 82-mm mortar mines, yielding by weight 76-mm projectile regimental guns in two times, not inferior to him in the fragmentation effect. In this case, the battalion mortar was several times lighter and cheaper.