Combat awards of the Russian Federation. Order "For Services to the Fatherland"

March 12 2014
6
1992 to 1994 in Russia there was a process of registration of new state awards. Work on orders and medals intensified after the approval of the new Russian coat of arms. 2 March 1994 was issued a presidential decree, which approved the first in Russia provision on state awards. At the same time, 13 orders and medals were established in the country, of which 9 awards could be awarded for military service. Among them, the first in importance was the Order of Merit for the Fatherland.

The sketch of the order was designed by Alexander Baklanov - the main artist of the St. Petersburg Mint. As a basis, he took the badge of the Order of St. Vladimir, which existed in pre-revolutionary Russia (the award was established by the decree of Catherine II and was one of the most honorable awards in the Russian Empire). In contrast to the orders and medals of the Soviet era, the new Russian Order had its own motto “Benefit, Honor and Glory,” which repeated the motto of the imperial Order of St. Vladimir. For four years from 1994 to 1998 for the year, until the Order of Saint Apostle Andrew the First-Called was established in Russia, the Order for Services to the Fatherland was the highest award of the Russian Federation. 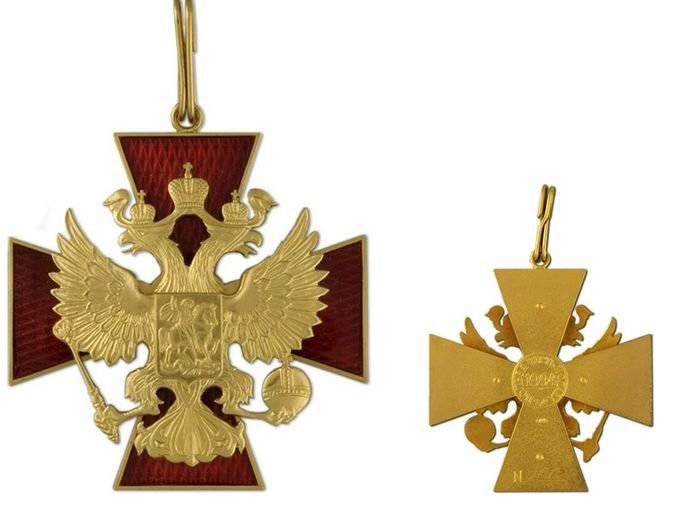 Badge of the Order of Merit for the Fatherland

Description of the Order

The Order “For Services to the Fatherland” is complex. Two higher degrees consist of three elements (a sign, a star and a ribbon), two lower ones - of two (a sign and a ribbon; a sign and a block). In all cases, the ribbon of the order is made of red silk.

Order "For Services to the Fatherland" I degree

The badge of the order is made of silver with gold. The sign is an equidistant cross with flared ends. The front side of this cross is covered with a ruby-colored enamel. The distance between the ends of the cross is 60 mm. At the edges of the cross there is a narrow convex welt. In the center on the face of the sign is the image of the State Emblem of the Russian Federation. On the reverse side of the sign is a small round medallion. Around the circumference of this medallion is the motto of the order: "Benefit, honor and glory." Also in its center is the year of establishment of the order - 1994. At the bottom of the medallion is an image of laurel branches. The sign number is stamped on the lower end of the cross. 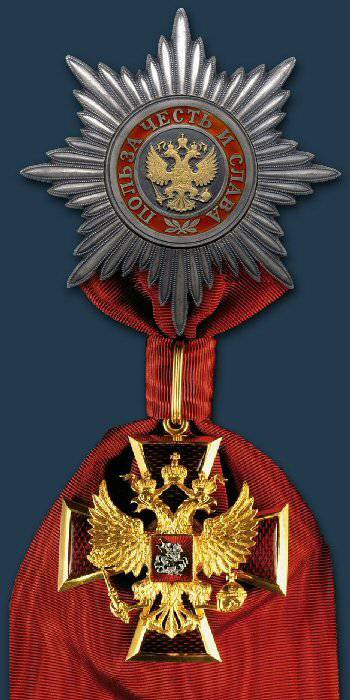 A complete set of the Order of Merit for the Fatherland, I degree 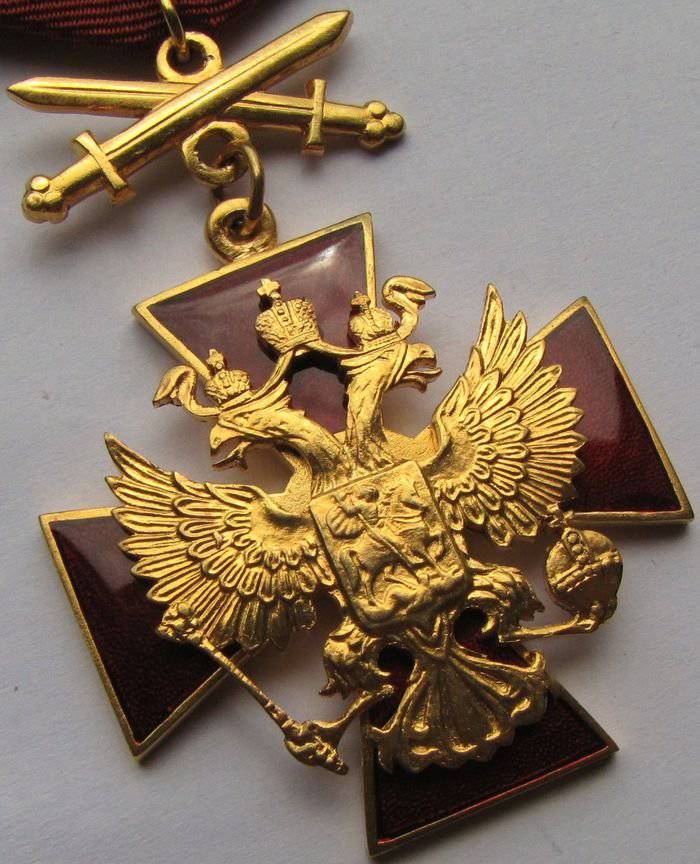 This badge is attached to a red silk moire ribbon having a width of 100 mm. At the same time on the ribbon of orders I and II degree in the center there is a miniature conditional image of a silver order star.

The award has a separate eight-pointed star with polished, faceted rays that are called fines. The star is made of silver. In its center there is a round medallion with a relief gilded image of the State Emblem of the Russian Federation, also made of silver. Along its circumference on the enamel field of red color with a silver edging, the order's motto: “Benefit, honor and glory”, as well as laurel branches, is applied. The distance between the opposite rays of the star is 82 mm. The star of the order is worn on the left side of the chest; it is attached to the clothes with a pin.

Order "For Services to the Fatherland" II degree 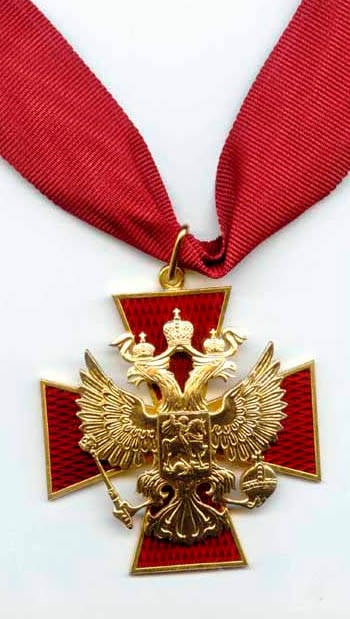 Order "For Services to the Fatherland" III degree

The badge of the order is completely identical to I degree, in size it corresponds to the sign of II degree. Fastens to the neck band width 24 mm. 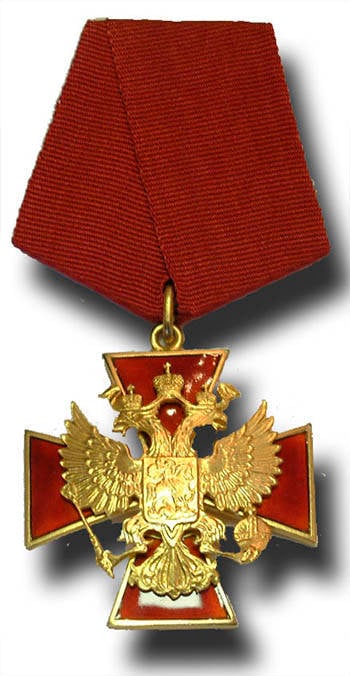 Order for Services to the Fatherland, IV degree

The badge of the order is completely identical to I degree, but has the smallest dimensions. The distance between the ends of the cross is only 40 mm. With the help of a ring and a lug, it is attached to a standard pentagonal block, which is covered with red silk moiré ribbon in 24 mm width.

To the badge of the Order, which is awarded to Russian soldiers who have been awarded for distinction in hostilities, are added two intersecting gilded swords that are attached to the ring between the block and the cross. The length of each gold-plated sword is 28 mm, width - 3 mm.

Ctrl Enter
Noticed oshЫbku Highlight text and press. Ctrl + Enter
We are
"For service and courage" "He was given for courage and loyalty to his native land."Military orders and medals of the Soviet Union. Order of the Patriotic War
Military Reviewin Yandex News
Military Reviewin Google News
6 comments
Information
Dear reader, to leave comments on the publication, you must sign in.