Pfeifer family SR2 - single-shot rifles, built according to the scheme "Bullpup". The overall length of the base model is 70 cm, and the length of the barrel is 66 cm. That is, the barrel is shorter than a rifle just 4 cm! And the remaining 4 cm occupy a shock mechanism and a rubber butt pad.

But this is not the only parameter that distinguishes the SR series rifles from the huge number of samples produced and known to us. weapons.

The rifle charges very unusual: from the butt. To do this, the butt plate on the back flaps back and up, and the shooter can insert one cartridge into the chamber and two spare cartridges into special openings for storage. Then the butt plate goes down and locked with the pivot arm. 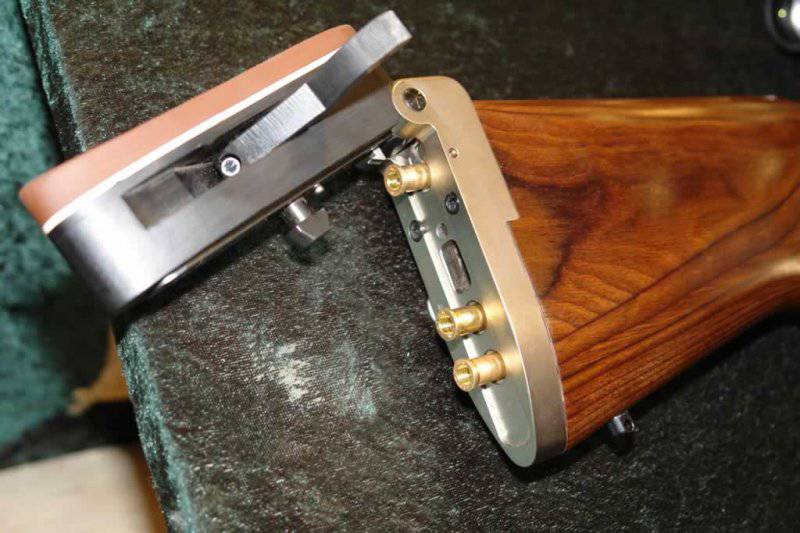 SR Pfeifer Series SR: 1 cartridge in the chamber and 2 in reserve. It remains to send them flush, slam the back plate and turn the lock down. 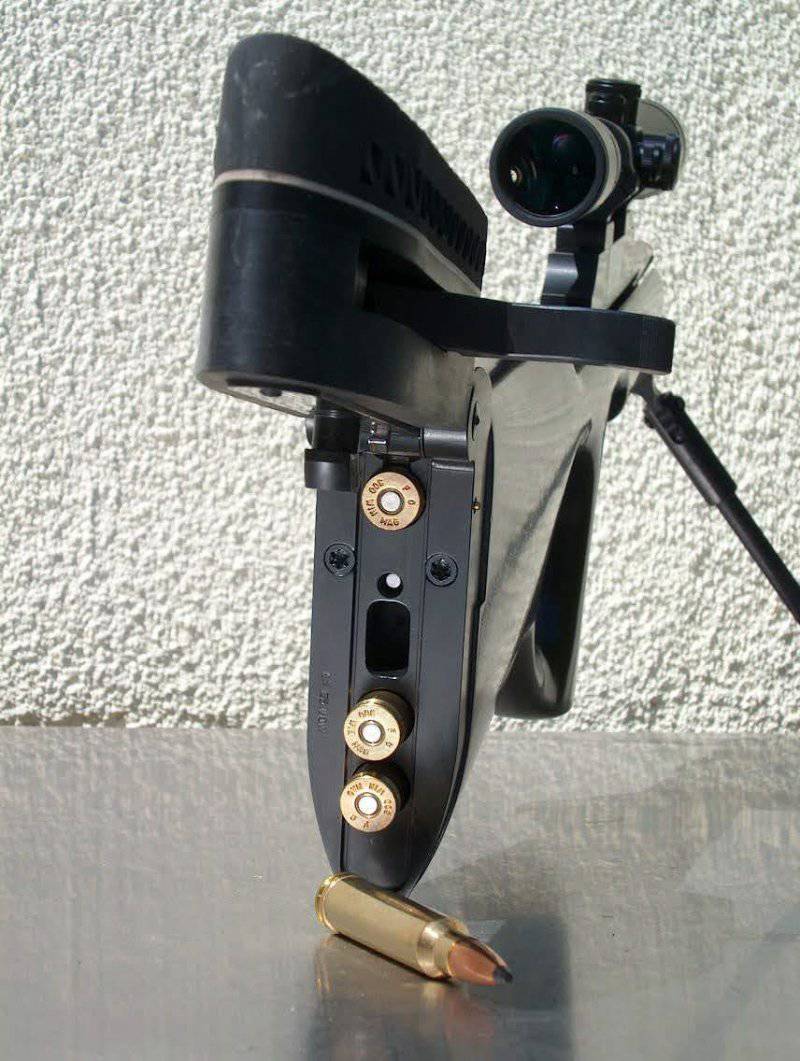 Weapons are also cocked in an unconventional way: by “away from you”. To bring the rifle into a fighting position, use ... trigger! It is installed in the trigger guard, but turned in the opposite direction and is located in front of the index finger. And, as I said, serves for cocking a drummer. To do this, the shooter pushes the thumb into the trigger guard and pushes the trigger “away from you”. This decision somehow reminded me of the PPSh, but Shpagin had a fire interpreter there. 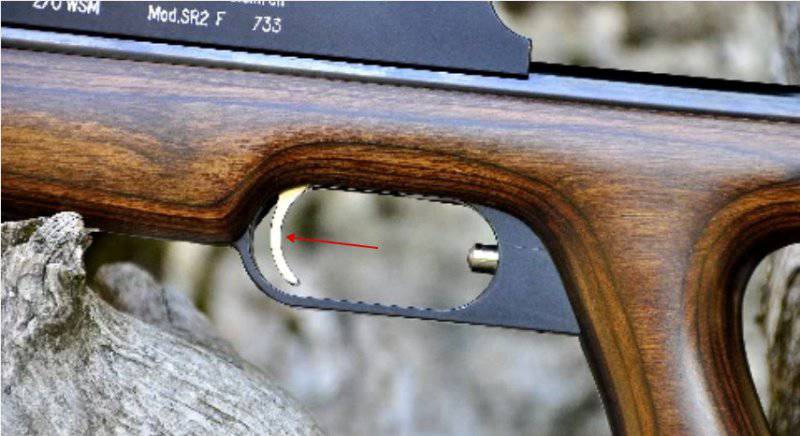 SR Series Pfeifer rifle: for cocking the firing pin ... push the trigger off with your thumb

The trigger is also unusual: it looks like ... a button from a fountain pen! He and the trigger is called because this button performs the function of the descent. 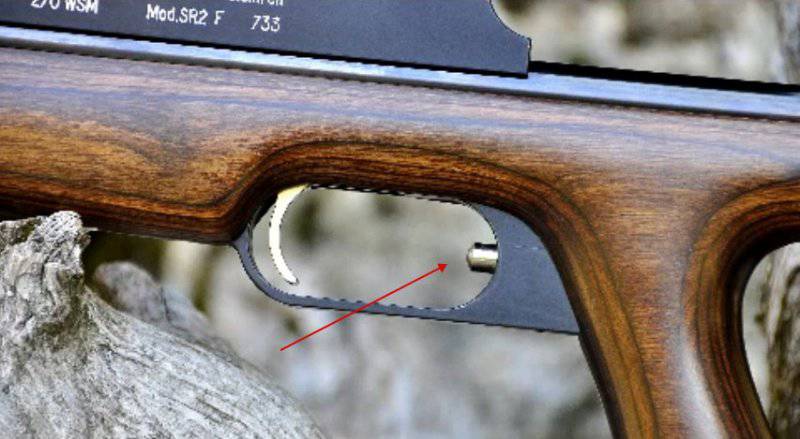 The SR rifle lock is locked with the ... key! How to lock the desk drawer. This option will cost the client only 75 euros. And in the basic configuration there is an automatic fuse that blocks USM and protects against accidental shots in the fall. 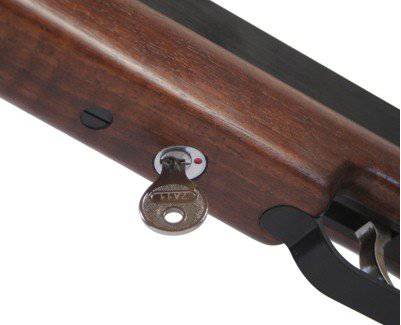 Some will say that the SR Pfeifer SR Series externally resemble a carbine for a Beretta Cx4 Storm pistol cartridge, but this is only a very distant external resemblance. Pfeifer rifles are different as the layout of the mechanisms, and used ammunition. Also, the production of Pfeifer Waffen is distinguished by its excellent quality that can be afforded, producing products in limited quantities or on an individual order, asking for a lot of money. 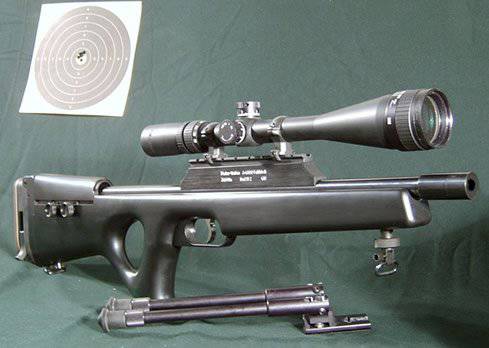 The metal parts of Pfeifer rifles are processed by carbonitriding in a liquid medium (Salt bath-nitrided quenched and tempered steel). I think that the process is identical to the technology Tenifer, which is used in the manufacture of Glock pistols and ORSIS rifles. Pfeifer rifle boxes are made from special weapon-grade laminate, walnut or ebony.

SR Series Pfeifer rifles can be ordered in almost any caliber: from .22LR to .458. Do you want chambered .22-250 Remington? Or under 8x68S RWS Magnum Rimless? Or maybe under .270 WSM (Winchester Short Magnum)? A friend advised under the .338 Winchester Magnum? Every whim for your money! Produced by any caliber of any material, any color. About accessories, I keep silent diplomatically.

The SR Pfeifer SR rifles are divided into the 3 series:
SR2 - basic series.
SR3 - lightweight version of the SR2 series: has a shorter and thinner barrel; it is offered for chucks: 22 Hornet, .222 Rem, .223 Rem., 5.6x50, 6x70R.
SR3 Sport - SR2 heavy duty barrel series from Lothar Walther with muzzle brake.
The standard package SR3 Sport includes: adjustable cheek on the butt, Picatinny-type strap for mounting optics, removable bipod, adjustable descent. The SR3 Sport is available in 308 Win calibers. or .223 Rem., but if you really want ... By default, SR3 Sport is made in black.

Such an unusual rifle is made in Austria.

On the one hand, this is a sufficiently accurate weapon for apt and self-confident hunters: with a slip, a second shot is unrealistic. Unless to catch up with the wounded and finish it off. On the other hand - for sports and entertainment shooting. I would like to look at those shooters ... And for me - a rare wonder in the collector’s armory.

Немного stories
The Austrian campaign Pfeifer Waffen, originally Montfort Waffen, was founded by Klaus Pfeifer in 1978. In April 2003, the campaign passed to his son, Christian Pfeifer.

The company produces custom-made various unique weapon systems and, thanks to consistently excellent results, gained a certain reputation and earned a solid reputation among hunters and weapon lovers.

I would like to highlight the master-gunsmith Otto Ziller, through which the campaign Pfeifer Waffen has expanded its world fame and confirmed its uniqueness.

The campaign says: “We are proud to be able to satisfy any wishes of our customers.”

Among the most unusual orders carried out by the Pfeiffer campaign, it is worth noting the development and production of the most powerful revolver in the world: Pfeifer Zeliska in Caliber .600 Nitro Express
Jean Claude Tolphin tests Pfeifer SR cal 270 WSM rifle