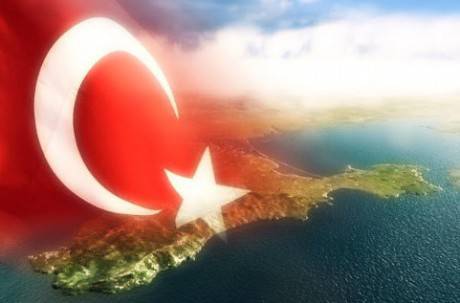 Against the background of the process of sovereignty of the Autonomous Republic of Crimea, Turkey, which is seriously stuck in uncertainty with the Kurdish question, and in the situation in and around Syria, and, finally, in its own internal squabbles and talks about the possibility of the resignation of Prime Minister Recep Tayyip Erdogan, has not particularly State level to get involved in the Crimean question. A statement by Turkish Foreign Minister Ahmet Davutoglu of 28 in February at a joint press conference with his Bulgarian counterpart Christian Vigenin noted: "For Turkey, territorial integrity, stability and prosperity of Ukraine are crucial. Crimea is of great importance for Turkey, as it is the door to Ukraine. It is also important due to the presence of the Tatars and the cultural heritage of Turkey. Our greatest desire is to maintain stability in Ukraine. " Davutoglu also stressed that Ankara is for consensus decisions on Crimea, i.e. without violence, through negotiations and agreements: “Turkey calls on all the leaders of ethnic and religious groups in Crimea to come together in the interests of stability and peace in the region. We will continue our efforts regarding Crimea.”


The day before, 7 in March, Prime Minister Erdogan himself spoke on the issue, who said that Turkey would support the Crimean Tatars in protecting their political rights against the background of the ongoing crisis in Ukraine. He also said that he had discussed the issue of the Tatar population of Crimea with Russian President Vladimir Putin. “I talked with Russian President Putin about events in Crimea and told him that Russia should protect the rights of the Crimean Tatars, as they do with the Russian majority and other minorities in Crimea,” said the Turkish Prime Minister. In fact, Erdogan not only does not reject, but also approves of Russia's efforts to maintain order in the Autonomous Republic of Crimea, believing that the rights of the Tatar population should also come under the protection of Moscow. It must be said, this is an adequate approach of Turkey in the current situation, as the ability of other forces besides Russia to maintain a little bit of order on Ukrainian territory today is doubtful.

Basically, that's all the role of Turkey as a state in the development of the future of the Crimea. The Turkish Foreign Minister has not yet undertaken the promised visit to Ukraine (and for a number of sources the short-term unofficial visit did take place), which is understandable - Ankara clearly prefers to look at the situation from afar and follow the development of Russia-West relations around Ukraine and Crimea.

On the other hand, some community groups in Turkey and abroad have been trying all along to create the impression that Ankara has almost the most real "vital" interests in Ukraine and on the Crimean peninsula. Thus, a whole range of Turkish media, as if anticipating that Ukraine is beginning to disintegrate into several independent parts, began to promote the idea that Turkey has the right to apply for the Crimea in this case. Without enumerations and, moreover, analysis of this nonsense (if so, then let us go back to the results of all Russian-Turkish wars! .. - and, by the way, Crimea has never been recognized as "part of Turkey"), we can say that "live responses “such publications were found perhaps in the ranks of the so-called Mejlis of the Crimean Tatar people and the so-called“ Crimean Tatar community ”of Turkey. Thus, the Representative of the Mejlis of the Crimean Tatar people in Turkey, Zafer Karatay, welcomed the statements by Davutoglu, adding that the Crimean Tatars expect Turkey to play an active role in organizing a dialogue with Russia in connection with the situation of the Tatars: “We are concerned about the separation of the Crimea from Ukraine and that the region is leaning towards Russia. This is aimed at creating a chaotic situation in the region by provoking ethnic Russians against the Tatars. Russia aims to prepare the ground for intervention. "

However, in the Crimea itself, the Crimean Tatar community behaved still and be careful, and was more divided in opinions. Otherwise, it is difficult to explain how mutually exclusive external behavioral motives such as: 1) support for President Yanukovich against the “Kiev Meidan” could appear and coexist alongside each other; 2) speeches in Simferopol against statements of Crimeans aimed at denying the “Kiev Meydan” and even clashes with Crimeans; 3) appeal to Russia with a request to protect the Crimean Tatars from "Bandera"; 4) appeal - however, only parts of the Mejlis of the Crimean Tatar people - to Turkey, Kazakhstan, Azerbaijan (!) With the request "to protect from Russia".

Here we have to return to the question whether Davudoglu was or was not in Ukraine and with whom he could meet. After all, it is no secret that this organization (the Mejlis of the Crimean Tatar people - MKTN), in fact, for more than the last few years 20 has played the role of a collective agent of Turkey’s influence throughout Ukraine. However, the above-mentioned "throwing from side to side", which distinguished various MKTN activists, suggest that in fact the real majority of the Crimean Tatar activists are disoriented and do not know which general political line to elect. And they really see the perpetrators of this situation in the policy of usurpers in Kiev, who initially and unequivocally opposed the languages ​​of all minorities, and not just the Russian language.

So, according to the Turkish media, during the 1-3 period in March, Davutoglu actively communicated and consulted with Western colleagues, and with the European Commissioner for External Affairs Catherine Ashton, and with representatives of the Crimean associations in Turkey. However, the result of all this activity was that on March 3, in a television interview, the head of the Turkish Foreign Ministry stressed that the strategic interests of Russia in Ukraine and in the Crimea should be recognized. At the same time, the minister called unacceptable a change in the internal balance of a sovereign state based on the interests of another state. In these formulations Ankara’s recognition of the Crimea’s right to raise its status and Russia's right to preserve its naval bases in the Crimea is hidden, but there’s no point of view that, let’s say, Crimea is reuniting with Russia. Here everything is veiled deeper - does it seem, for example, to change the "internal balance" of Ukraine (and why is it internal? ..) when the Crimea leaves its structure? For "Bandera" it is even grace, the population of Ukraine will immediately decrease by 2,5-3 million Russians and Russian speakers. What is the "damage" to the modern Ukrainian Nazis from the "Right Sector"? They will only win. But now, when March 16 will pass the all-Crimean referendum, the above questions do not look rhetorical and trite. Nevertheless, the result is clear - Turkey does not intend to dispute Russia's rights not only in the Crimea, but throughout Ukraine as a whole.

But after that, indeed, the attempts of various circles went to involve the Turks in the conflict with the Russian people of Crimea and Russia. First, and clearly, not without pressure from the United States, as Hürriyet Daily News 5 reported in March, citing its own sources, the Turks still gave permission for the US Navy warship to pass through the Bosphorus into the Black Sea over the coming days. The American missile destroyer "Truxton" crossed the Bosphorus and entered the Black Sea on March 7. The US Navy announced that this ship had left the Greek port of Souda to take part in exercises with naval forces of Romania and Bulgaria in the Black Sea.

Secondly, there were reports that even Poland (!) Is trying to include Turkey in the fight against the independence of the Crimea. Thirdly, at last, the previously silent, open conductors of the policy of pan-Turkism in the MKTN ranks — the notorious “friends” of terrorists of all stripes (including in the North Caucasus) Mustafa Dzhemilev and Refat Chubarov. The first of them - now former chairman MKTN, but the deputies of Ukraine. He said in an interview with the Azerbaijani press (fragments appeared in the Ukrainian 6 media of March): "The Crimean Tatars are asking the presidents of Turkey, Kazakhstan and Azerbaijan not to allow the Crimea to leave Ukraine." Dzhemilev noted that Turkish Prime Minister Erdogan had already invited a delegation of Crimean Tatars to Ankara to discuss the current situation: "But now we don’t need discussions, but real actions are needed. Crimean Tatars will never live in Russia, we will fight with all possible means for our the rights". But the current leader of MKTN Chubarov urges the international community to immediately consider the possibility of introducing an international peacekeeping contingent of UN security forces into the territory of Crimea. According to him, it is necessary for the de-escalation of the conflict in the Crimea, which could lead to mass casualties. Chubarov also called on all residents of Crimea to boycott the referendum, the decision to hold which was made allegedly in a "non-legal way" - and "completely ignores the interests and violates the rights of the inhabitants of Crimea."

Fourth, finally, they attempted to involve Ankara in the situation in the Crimea and the usurpers of Kiev. The Ukrainian Ambassador to Turkey, Sergei Konsunsky, in an interview with the Turkish news agency Cihan, as reported by the press service of the 6 embassy in March, said: "I appeal to our strategic partner, Turkey, to ensure the provision of political, economic assistance to Ukraine, as well as necessary, and military assistance. " From the further context of this statement, it is clear that Kiev invites Turkey to war against Russia on the territory of Ukraine, and not the Crimea, although there is a hint that the "meydanshchiki" expect the Turks first to the Crimea. But the essence of this does not change much - and it is this: Kiev intends to draw Turkey into a series of anti-Russian, first of all, measures and steps from the side of Ukraine.

However, as we can see, the most dangerous are the movements and statements of the two “players” from MKTN - Dzhemilev and Chubarov (one of them goes to the “Ukrainian deputies”, then the second, respectively, replacing each other on the post of MKTN leader) .). The danger lies in the fact that it is they who will put their armed formations in the service of forces, perhaps already planning anti-Russian and anti-Russian armed provocations on the peninsula. And it is they who are able to connect to terror against Russians and Russian speakers and such an odious terrorist group as Hizb ut-Tahrir - ironically, all the authorities of Ukraine "did not see" in this grouping no threat, while all The world officially recognizes it as an integral part of the international terrorist "Internationale" from the Philippines to the Balkans. And, accordingly, even “Yanukovich’s” Kiev forbade the Crimean authorities to undertake anything effective against members of Hizb ut-Tahrir on the peninsula.

Therefore, it should now be assumed that even if Turkey takes any part in the affairs of Ukraine and Crimea, it will prefer - based on the statements of its own foreign minister from March 3 - not to go into direct confrontation with Russia and the Crimea. Subversive actions instead of the Turks can be carried out by the personal supporters of Dzhemilev and Chubarov, as well as the Crimean Tatar members of Hizb ut-Tahrir. But further difficult to predict.

Ctrl Enter
Noticed oshЫbku Highlight text and press. Ctrl + Enter
We are
Care of the Turkish Jack: on the consequences of the resignation of Ahmet DavutogluSergey Shakaryants: Games with the Kurdish factor
Military Reviewin Yandex News
Military Reviewin Google News
53 comments
Information
Dear reader, to leave comments on the publication, you must sign in.