Turkey: gives power to its own "bloody gebne." And waiting for the election 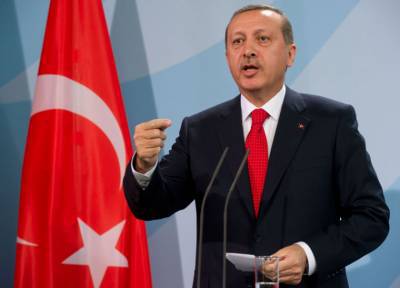 The Turkish Parliament is discussing a new bill to significantly expand the powers of the National Intelligence Service (MIT). The initiative of the government of Recep Tayyip Erdogan caused a flurry of comments in the opposition media, in which the future Turkey is called as “the country of Mukhabarat” or “the country of the Secret Police”. The observer of the weekly Zaman even wrote that the proposed draft law is nothing more than an attempt to turn Turkey into a copy of the state described in George Orwell’s dystopian novel “1984 Year”


The government and the ruling Justice and Development Party (AKP) want to introduce censorship on the Internet and abolish the already relative independence of the judiciary. "Well, since the implementation of such projects requires the appropriate tools, the ruling party proposed to reorganize the National Intelligence Service in the image and likeness of the Islamic Revolutionary Guard Corps in Iran," writes Zaman.

We are talking about the delegation of the right to MIT to conduct secret operations abroad, to fight terrorism and to counter threats to national security. As for foreign operations, everything is clear with them - intelligence services of all countries are engaged in such things. But here are the last two points raise serious questions.

The fact is that “terrorism” and “threats to national security” are extremely ambiguous and flexible in use. Many in Turkey fear that with their help it will be easy to deal with fellow citizens, who, although they have nothing in common with terrorists, are not actively liked by the authorities.

At the same time, the new law (if it is, of course, adopted) makes MIT an untouchable structure, not even controlled by the country's parliament. It will be possible to bring an MIT agent to court only with the approval of the Prime Minister, but the agents themselves will have the right of unlimited access to the information bases of any structures, including banks, schools, private firms, airlines, charitable foundations and universities.

The bill provides for a strict ban on the dissemination of information and documents relating to the activities of MIT. Violations of this prohibition can lead the perpetrators to 12 years in prison. But the intelligence service itself will be able to listen to public telephones installed on the streets, as well as conversations of foreigners residing in Turkey and Turkish citizens living abroad without any prosecutor’s orders.

Deciding who represents a threat to national security, and who does not, will, of course, be the government itself. In this regard, Turkish newspapers cite an interesting fact: comparatively recently, the movement of Fethullah Gulen did not appear in the “black lists”, but now Erdogan declared it socially dangerous. Gulenists were even listed as terrorist organizations, but MIT removed Al-Qaida from this list back in 2010.

The movement of the Muslim philosopher and preacher Fethullah Gülen, now living in self-exile in Pennsylvania, USA, is a cross between a religious order and a powerful transnational corporation with a global network of businesses, schools, universities and the media. Gulenists are a very serious political force, whose interests increasingly conflict with the ruling Justice and Development Party in Turkey.

Not only did the supporters of Gulen take an active part in the recent revelations of high-ranking corrupt officials who had connections with the government and party leaders, according to press reports, they are now actively establishing links with other opposition forces inside Turkey. Consequently, the movement poses a serious threat - if not the national security of the country, then certainly the reputation of the AKP and the political plans of Erdogan.

Today, Turkey faces serious risks associated with both the traditional Kurdish problem and the civil war in Syria (Ankara’s position on the Syrian issue served her a disservice). The assumption that Turkey could become a new leader in the democratized Muslim world was not justified. Democratization did not work, but Erdogan, more and more often, including in the West, is reproached for admitting jihadist fighters in transit in his territory to Syria. Moreover, these militants are a real danger for Turkey itself. After all, it is here that they will return if Bashar Asad defeats his opponents.

Another problem is Turkey’s financial vulnerability. As is known, AKP came to power as a result of the large-scale banking crisis of the 2001 year, after which a decade of relatively stable economic growth came. The influence of AKP grew rapidly, and the secular business elite of Turkey just as quickly and decisively pushed into the background. In its stead Erdogan was preparing a stratum of new loyalist businessmen, and it seemed that everything was going as well as possible.

At that time, Turkey was actively attracting cheap and mobile portfolio investment - as a result, a country with a population of more than 70 million people and a steadily growing economy turned out to be seriously dependent on the influx of foreign money that is urgently needed to pay for energy contracts, which, by and large, ensured economic growth.

The trouble is that most of the foreign money flowing to Turkey was invested in debts or in ordinary stocks. (These are not direct investments that imply job creation and indicate investor interest in the development of the company for the long term). At the end of 2013, the share of direct investment in the Turkish economy was 11 billion dollars, while the share of portfolio investment reached 26 billion. And it is obvious that any political crisis will deal a much more serious blow to the financial system of Turkey than to the economies of countries with predominant foreign direct investment.

An additional risk factor is the close connection of the new Turkish economy with the ruling Justice and Development Party. According to experts, nothing unexpected will happen if the AKP opponents, united, try to strike at its financial base.

Erdogan and his party gather forces in a fist. The goal is to win the presidential election in August 2014. These will be the first nationwide presidential elections (before this, the head of state was elected by the parliament). As a result, Turkey should become a presidential republic. Or, as Erdogan’s opponents fear, “the land of Mukhabarat”.

Ctrl Enter
Noticed oshЫbku Highlight text and press. Ctrl + Enter
We are
On the other side of the “red” and “white”. Izborsk Club ReportThe Bergman trail to the North Caucasus
Military Reviewin Yandex News
Military Reviewin Google News
38 comments
Information
Dear reader, to leave comments on the publication, you must sign in.