March 12 2014
22
In 1945, Germany began manufacturing Fliegerfaust anti-aircraft grenade launchers. it weapon was a block of nine launch tubes caliber 20 mm. Before the shot, special unguided rockets were placed in the pipes. The volley of nine missiles, as conceived by the developers, was to ensure an acceptable probability of hitting an enemy aircraft. Nevertheless, the war was coming to an end and the first German anti-aircraft grenade launcher could not show itself in battle.

Fliegerfaust with a block of rockets

The rapid development of weapons and military equipment, which began after the Second World War, led to the emergence of a mass of new classes of weapons. However, anti-aircraft grenade launchers were quickly declared unpromising and forgotten. It is unlikely that any of the gunsmiths in the second half of the forties could have imagined that the idea of ​​a reactive anti-aircraft grenade launcher in a slightly modified form would again become relevant in just a year or two or two decades.

In the mid-sixties in Vietnam, a war began with the participation of the United States. The US military actively used helicopters of several models designed to perform transport and attack tasks. Vietnamese soldiers badly needed simple and cheap weapons capable of hitting enemy helicopters. It should be noted that the Soviet radar and anti-aircraft missile systems supplied to Vietnam could not cope with this task.

In June, the Central Research Institute of Precision Engineering (TsNIITochmash), located in Klimovsk, near Moscow, received an order from the Ministry of Defense in June 1966. The document, signed by the head of the military department, was required to create a lightweight, cheap and easy-to-use portable anti-aircraft missile system. The calculation of the new anti-aircraft system was to consist of one or two people, which determined the maximum permissible dimensions and weight. In addition, the military wanted to see anti-aircraft missiles without sophisticated onboard equipment. To compensate for the absence of guidance systems, it was necessary to use multiple rocket fire at volleys.

The project of a promising anti-aircraft complex received the symbol "Kolos". The main designers were steel AG Novozhilov and V.M. Karak. The development of the Kolos system began with a search for the optimal technical look. The designers from TsNIITochmash carefully studied a similar German project, and also analyzed the possibilities of domestic industry. As a result of all surveys and calculations, the main features of MANPADS were established, under which the best combination of weight, size and combat effectiveness could be achieved.

The Kolos portable anti-aircraft complex launcher was supposed to have seven guide rails for unguided 30 caliber mm. The trunks were proposed to be placed inside a single tubular casing. In order to reduce the weight of weapons and ammunition, it was proposed to develop a block of missiles for the new weaponry that serves as a clip.

Seven 30-mm guide rails were placed on the same circle. The barrels were located with a slight collapse relative to the axis of the weapon. It was assumed that such placement would increase the spread of shells and thereby increase the probability of hitting the target. In the breech breech provided for cameras to accommodate the missiles before launch, and behind them - the charging chamber, in which the block of missiles was to be located. Behind the charging chamber on the starter there was a folding nozzle that also served as a shutter. To protect the shooter from the hot parts of the weapon, the trunks were covered with a foam plastic cover and glass cloth.

On the bottom surface of the casing, the Kolos trigger device had two pistol-type handles designed to hold when firing. On the rear handle was located the trigger associated with a hammer-type firing mechanism. For guidance on the new MANPADS provided a sight with perspective rings. Such aiming devices made it possible to direct weapons with accuracy acceptable for firing unguided rockets.

Perhaps the greatest interest in the Kolos project is the HPC-30 rocket missiles. Ammunition caliber 30 mm was proposed to be installed in a single unit, facilitating the manufacture and loading. It was assumed that the missile unit would be equipped with ammunition at the factory and enter the troops in a fully ready to use form. Before firing a calculation of a portable anti-aircraft missile system, it was necessary to open the bolt of the weapon, place a block of rockets in the charging chamber and close the bolt. No additional handling of ammunition was required.

According to the idea of ​​the authors of the project, the block of shells should not only hold the missiles, but also throw them out of the launch device. For this, a propellant charge with specified characteristics should be in the cylindrical part of the block. According to the calculations of TsNIITochmash designers, the propellant charge was supposed to create a pressure of the order of 120 atmospheres and throw missiles from the barrels. Before exiting the barrel, the guiding rocket had to be accelerated to the speed of 110 m / s and unwind to 100 revolutions per second. Some time after leaving the barrel, in 17-22 meters from the starting device, the pyrotechnic rocket retarder was supposed to ignite the charge of its solid-fuel engine. The cruise speed of the HPC-30 rocket was determined at the level of 560 m / s.

The first variants of rockets had a lot of problems. The development of these munitions turned out to be very difficult, since in one product it was necessary to fulfill several specific requirements. Thus, the requirements of the minimum recoil affected the permissible values ​​of the initial velocity of the projectiles, and the decrease in the latter worsened the accuracy of fire. For this reason, as a result, it was decided to install projectiles in a single unit with a common propelling charge. The final decision to apply this idea was made at the beginning of 1967.

Thanks to its simple design and the use of light materials, the Kolos portable anti-aircraft missile system was fairly light for its size. With a total length of 1,5 meter without ammunition, he weighed an 9,2 kilogram, which allowed him to use it alone. The shooter could lay a launcher on his shoulder and attack the target without needing any machine. Equipped with a block of shells weighed 5,3 kg, missiles - 4,5 kg. For more convenience, the calculation of MANPADS should use two special packs in which weapons and ammunition were placed in the stowed position. The packs were large backpacks with a rigid frame. In one of them, it was proposed to transfer the anti-aircraft system and two blocks of missiles for it, in the second - four blocks of shells. The weight of each of the packs did not exceed 23 kg. 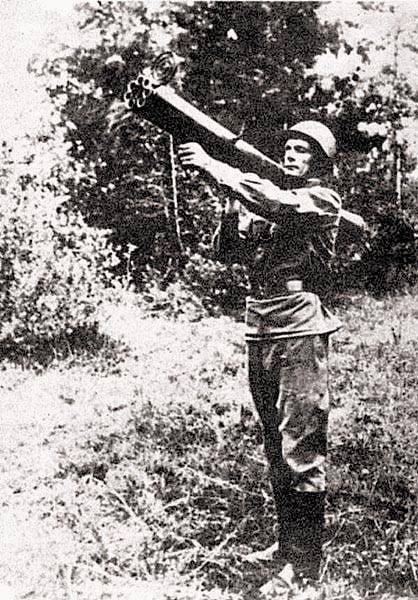 "Ear" in a firing position

The prototype Kolos MANPADS was manufactured in April 1967. From June 1967 to May 1968, his tests continued. Despite the use of unguided rockets, the characteristics of the complex turned out to be quite high and fully met the requirements of the customer. Dimensions and angles of fire fully complied with the technical task, and the accuracy and efficiency of shooting was better than required. By the power of 30-mm rocket shells caught up with 37-mm projectiles of automatic guns. At a distance of 500 meters, shells of Kolos missiles were punched up to 10 mm of armor at meeting angles up to 60 °. This allowed, if necessary, to use a new anti-aircraft system against enemy light armored vehicles at distances up to 2 kilometers.

Having relatively small dimensions and acceptable accuracy of fire, the Kolos portable anti-aircraft complex was advantageous from an economic point of view. The manufacture of the launch device cost just 36 rubles, one unit of missiles - in 31 ruble 80 kopecks. Thus, the production of large batches of Kolos complexes would have cost the customer much cheaper than ordering other anti-aircraft systems of the time, and the price difference could more than compensate for the loss in performance.

However, none of the advantages of the Kolos anti-aircraft complex could help him get into the army of the Soviet Union or Vietnam. After the end of the test, the Kolos project was closed. Apparently, the needs of the USSR Armed Forces affected the fate of the project, and the needs of the Vietnamese troops were relegated to the background. After the Kolos system, the Soviet defense industry did not deal with the subject of MANPADS with unguided missiles.