“Our Yulia” is an unsinkable political ... Who or what? 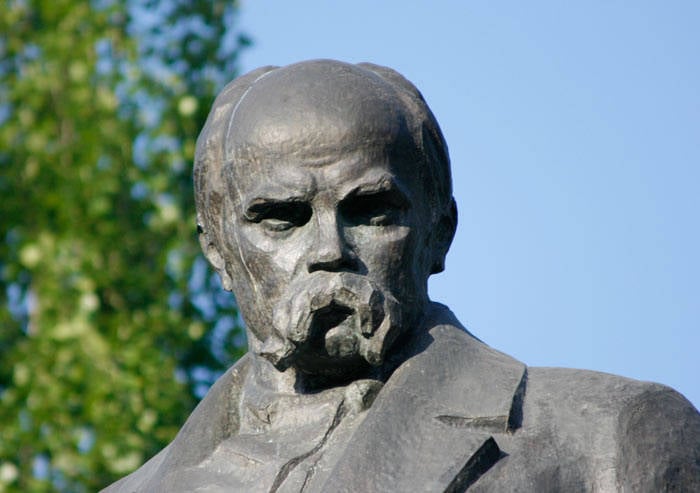 “Comrade Yulia, you are a great scientist who knows a lot about Shevchenko,” so can all the fans of Yulia Tymoshenko and the talent of the Ukrainian poet Taras Shevchenko, whose 200 anniversary of 9 in March of this year was marred by the Ukrainian-Russian confrontation around the Crimea, can already sing. But it didn’t prevent Yulia Vladimirovna from writing a long way from the German one — Taras Grigoryevich personally. And to enlighten Kobzar, who, as we know, himself studied military affairs in the present way 10 for years in the royal army, about the modern outfit of law enforcement officers. At all.

... And in particular - specializing in the dispersal of demonstrations during all the "color revolutions" there. “You,” writes Yulia Vladimirovna Taras Grigorievich, “of course, did not know, and could not know what a sniper's sight is, what a noise-noise grenade or a water cannon is. But still - in those tragic and great days, and you were there. On the streets, on the grounds and squares. You inspired the nation to fight, to fight evil and darkness. We paid a big price for this victory. Hundreds of sons from the Heavenly hundreds went to eternity, fell in the struggle for independence and freedom. I want to believe that somewhere there they are with you now! ... Today, on this glorious spring day of the 200 anniversary from the day you were born, we can say: we have done your will, we have done your Witch! For years, with silent reproach, you looked at us from the pedestals. For many years the nation went to your stone incarnations to lament and complain about a bad fate. ”

Why should a dead Kobzar know this, who, although he hated kings, nevertheless specialized in poems, drawings and - in recent years - alcohol, it becomes clear from the whole short post-life life of Tymoshenko, who all this time painfully pondered over two main questions - “What happened? "and, of course," What to do? ".

The fact is that it was all noticed, tearing off the crippled spine from the orthopedic mattress in the Kharkov hospital of railway workers, Tymoshenko immediately rushed not even to her mother, who, as it turned out later, had her legs refused but to the Maidan. The revolution - its true element - was more important than both its own and maternal senile ailments. Straight in a wheelchair, stout and aged, with a blond braid, visually poorly tied with the rest of the brown hair on her head, the prisoner of conscience who received freedom revealed herself to the Maidan and tearfully and revolutionary lamented the inevitable victory in general and over Viktor Yanukovych in particular. And the Maidan listened and ... did not fall into ecstasy, as happened before.

Of course, it gave way to a sharp pain. And not so much in the crippled totalitarian junta spine, as in the brain. “Everything is gone!” - the petty little thought again came from somewhere in the subconscious. And Yulia Vladimirovna understood: not just the changers in “Batkivshchyna” grew up, who turned out to be not only greedy, but also mean-spirited. Also, “euromaidan” gave rise to a new tribe of leaders, young and unfamiliar, to whom from under the tail to put on all the former merits of former leaders. And the people who stood on Independence did not believe her unconditionally, but directly shouted: “Julia, we are not here for you, not for you!”. It was a bad and extremely vile bell ...

However, when they began to divide places at the “trough” freed by the prisoner of conscience by the cowardly alter ego, she, out of habit, snapped off the main posts in the country - the Speaker of Parliament, and. about. President and Prime Minister, but not for himself. She herself calmed down and painfully chose a course of behavior in the changed conditions. And, I must give her her due, her searches were crowned with success. She almost unmistakably realized that the main trend of the “goddess” is frantic nationalism in all types and shades. From the national democratic twists of the intelligentsia to cave xenophobia and chauvinism, heavily mixed with the traditional Galician “Get Moscow view!” And “Moskal knives!”. In the performance of the already familiar "Freedom" Oleg Tyagnybok and political neophyte - "Right Sector" Dmitry Yarosh.

And here also the situation with the Crimea turned up. The “Russian Spring” zaagged around the regions of the south-east of Ukraine, risking to wrest them after the Crimea from the country. And Tymoshenko found two ways to save her reputation. First, she decided to literally ride the nationalist trend, becoming more radical in this matter and approaching competitors in a completely differentiated manner. "Freedom" was decided to strangle in his arms, sharing power with her. And so it happened - the current government consists entirely of representatives of “Batkivshchyna” and “Freedom”, who, if something happens, will take responsibility for all sorts of defeats and troubles awaiting Ukraine. Including as a result of the loss of the Crimea, and even the entire south-east of the country as a result of the “Russian spring” in this region.

In competition with the “Right Sector”, an even more radical and sophisticated nationalism, bordering on chauvinism and xenophobia, so dear to the heart of primitive Natsik from Galicia, has been adopted. And what-what, and Tymoshenko can talk!

Secondly, radical and uncompromising patriotism has been taken into service, generously flavored with Russophobia and total “anti-Russianism,” which is extremely relevant against the background of the current Russian-Ukrainian aggravation. And, of course, the struggle for the Crimea. Tymoshenko was in fact the ideologist of the armed struggle against the so-called "separatism" of southeastern Ukraine and the forceful suppression of the Crimean desire to leave the control of the Kiev coup. Inspired by her speeches, the President-Speaker Turchynov and Prime Minister Yatsenyuk also “stirred” and began to brush off dust and rust from Ukraine for many years tanks and armored personnel carrier. And the “Right Sector” was plotting for a real war with the Muscovites, in which its fighters, if, God forbid, it would begin, and would be killed, freeing the intra-Ukrainian arena from their belligerent presence for ... correctly preserved Tymoshenko. This, in fact, is the calculation.

And so that before this blessed time to save herself safe and sound and at the same time not to lose her political face, Tymoshenko again recalled the "diseased spine." He had already begun to incredibly recover from prison and generally showed miracles of resilience at the US embassy in Ukraine, and suddenly he fell asleep again and forced Tymoshenko to go to Charlite clinic in Berlin for a week, where she was waiting for more than two years in prison. And what a week! Just before 16 in March of 2014 of the year, on when the all-Crimean referendum was appointed, which should determine where the peninsula is located - in Ukraine or in Russia. And when a true patriot should be at the forefront of the fight against the “Moskalyam”.

And Tymoshenko, so it turns out, again in the hospital. And now, in a possible Ukrainian-Crimean slaughter, she is not Joan of Arc, on a dashing yellow-blue armored personnel carrier leading her armadas to liberate the rebellious peninsula from the “bloody gebni of the Kremlin”, but “an old sick woman” who has a soul on the battlefield, but perishable sick body on an orthopedic bed.


How so? Feel failed? Cowardice prevailed? Far from it. Before the clinic, Tymoshenko met with German Federal Chancellor Angela Merkel and demanded that she impose tougher and more immediate sanctions against Russia. And Frau Merkel sent her. Politely, but firmly. And Yulia Vladimirovna understood: nobody is ready to quarrel with Russia seriously in Europe. And therefore, I chose a line of conduct for the time of a possible exacerbation of the Crimean issue — to wait out in safety. They do not go to the front line either. about. President, the Speaker of the Rada and the Supreme Commander in one bottle, Oleksandr Turchynov, nor the head of the cabinet, Arseniy Yatsenyuk (although he is known as a “front-line rabbit”). So she apparently reluctant to expose themselves to danger. When polite military or “green men” can easily capture her captive and, for an hour, heal the spine with a deminer blade over the hump.

But on the other hand, this is a very clever and far-sighted tactic. The efforts of the current Ukrainian authorities to curb the Crimea with success will be crowned - she was right there: they said, despite the illness, she was mentally with you, inspired, than she could even with a broken spine. Takes Kiev in the Crimea crushing fiasco (most likely) - it is not in the business: an insidious disease vilely put out of action, and these idiots (clunks, profane, losers, dumb, etc.) without me could not do anything and profukali part of the Ukrainian territory.

And anyway, Julia Vladimirovna is not in the loser. Failures in the Crimea will finally bury her possible mates as in the party - Turchinov and Yatsenyuk, who have already felt the taste of power, and in general in the Ukrainian politician. She will again play the role that she has so far succeeded best of all - to be both radically patriotic and moderately pragmatic if pseudo-patriotic foam subsided and the search for a negotiable politician began in Ukraine. Despite her ostentatious and noisy radicalism, Tymoshenko in previous years as Ukrainian prime minister was able to find a common language with Moscow, and with Washington, and with Brussels, and with Berlin, and with Paris. And so comprehensively get on with the world of Ukrainian politicians no one else could.

This resourcefulness and provided Tymoshenko unsinkable and political longevity. May she bring dividends now. Tymoshenko and today actually leads the country from behind the backs of Turchinov and Yatsenyuk. And then, after the collapse of the henchmen, it will generally come to the fore when it becomes clear who, under the new Constitution of Ukraine, is more profitable to be - the president or the prime minister.

... And now Yulia Vladimirovna can please world medicine with one more phenomenon - to show yourself how the revolution affects the spinal curability. Previously, all the doctors argued that if Tymoshenko was not released into the wild or at least not operated on in Germany without fail, then she would generally remain immobilized forever. Now that she is already free, it turns out that the vertebrae are just shifted, and the treatment will take a week. And you can do without surgery. Because the disease, it turns out, is called "inflammation of the tricks of the spine." What a chic sore ...