March 12 2014
21
Since the end of the eighties, the US Marine Corps has been using airborne assault boats of the LCAC type. These boats are designed to transport personnel, equipment and weapons from amphibious ships to the coast. With a maximum displacement of up to 185 tonnes, LCAC boats can take 54 tons of cargo on board. If necessary, the capacity of the boat can be increased to 68 tons due to the deterioration of other characteristics. The size of the LCAC boat deck allows you to carry various equipment and weapons, as well as soldiers with equipment. For example, an amphibious assault boat of this type can transport up to 12 HMMWV vehicles or one main tank M1A Abrams. 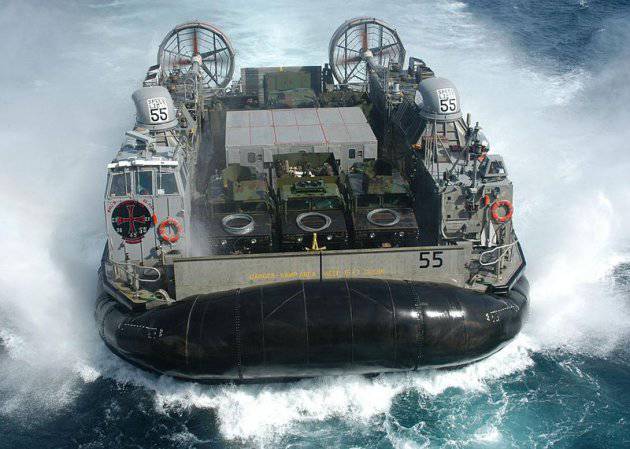 The characteristics of the existing landing craft are quite high, but in the future, the US Marine Corps wants to get a new equipment of a similar purpose. Currently, the amphibious vehicle being developed as part of the UHAC program (Ultra Heavy-lift Amphibious Connector) is considered as a substitute for LCAC boats. It is expected that the original ideas on which this program is based will lead to a significant increase in the capacity of the marines.

The UHAC program is currently in the testing phase of an experimental vehicle. Specialists of the Marine Corps Battle Laboratory built a prototype amphibian, which is about half the size of the designed amphibious assault vehicle. Now the prototype is being tested in the Philippines. During the test "races" on the water, engineers collect the necessary information about the work of various components and assemblies. As part of the tests, it is supposed to establish all the positive and negative aspects of the proposed ideas, as well as their prospects for use in practice.

The UHAC experimental amphibian has a length of the order of 12 meters and a total height of about 5 meters. The authors of the project considered that, with such dimensions, the prototype would be able to fully carry out the tasks assigned to it and assist in collecting the necessary data. In the future, it is planned to build prototypes of amphibious landing-landing craft, the dimensions of which will be approximately equal to the size of LCAC boats.

Amphibian UHAC is a tracked vehicle of original design. All the main units of the machine are located inside the box body. In the front part of the cabin is provided with all the necessary equipment. Large caterpillars are located on the sides of the amphibious vehicle hull. In their design, several interesting ideas are applied, which should provide the car with high characteristics when traveling both by water and by land.

The original tracked propulsion of amphibians of the UHAC family is proposed to be carried out on the basis of existing schemes using new ideas. Caterpillars amphibious amphibians should have a large width, which reduces the load on the surface. The ground pressure of the existing prototype does not exceed 2 pounds per square inch (about 140 g per square centimeter). Such low pressure allows the prototype to move on surfaces of various types, including sand and marshland.

To increase the buoyancy and the water movement characteristics, the caterpillars of the UHAC amphibian prototype are equipped with special blocks of porous material that perform the functions of tracks. Such tracks, despite a more complex structure compared to conventional systems, perform several functions and therefore are optimal for use on amphibious amphibious assault vehicles. 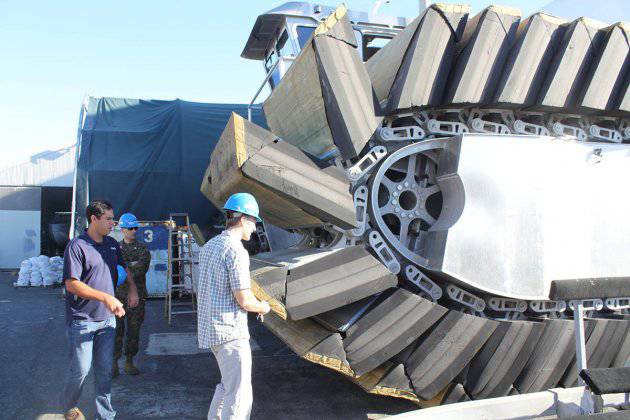 As shown by tests of the prototype amphibian UHAC, the tracks of the new design allow it to literally go on the water. To date, a speed of the order of 20 nodes (37 km / h) has been reached in such “races”. Apparently, this is not the limit and the original propulsion unit in the future will allow to develop high speeds. For comparison, full-load LCAC hovercraft can accelerate to 40 nodes (74 km / h), and their maximum speed exceeds 70 nodes (130 km / h). The experimental UHAC machine is still losing to speedboat serial boats in speed, but surpasses them in all terrain. So, if necessary, tracked amphibious can climb on the wall height up to 3 meters.

The architecture of amphibians, developed under the UHAC program, allows you to achieve high levels of capacity. According to published information, a similar machine the length of a LCAC boat can carry up to 200 tons of cargo. Already there are the first images of such landing-landing craft, while representing a computer drawing. The amphibian depicted in the figure strongly resembles the existing prototype, although it has several major differences. First of all, the absence of a separate serving crew cabin is noticeable. It is proposed to perform in the form of felling in the upper front of the hull. Under the cabin should be located ramp for disembarking people and equipment. At the rear of the case should be the second ramp. As follows from the figure, an additional volume for the payload can be placed at the sides of the hull, inside the tracks.

The amphibious assault amphibious UHAC can transport up to 180-200 tons of payload at a speed of at least 20-25 nodes over a distance of more than 200 kilometers. With the appearance of such a landing craft, the United States Marine Corps will be able to quickly transfer and land amphibious assault forces. Despite the large payload, amphibians UHAC are unlikely to be able to force out the LCAC boats in the military, which will be used in parallel with them. The advantage of hovercraft in speed is such that a complete rejection of them does not make sense.

The 2014 year is scheduled for advanced testing of an experimental amphibious vehicle. By the end of the year, the UHAC prototype should show its capabilities again, as well as complete a number of special tasks. According to reports, the prototype amphibian will participate in the exercises RIMPAC 2014. After additional testing, the authors of the project will continue to develop a new amphibious assault vehicle. 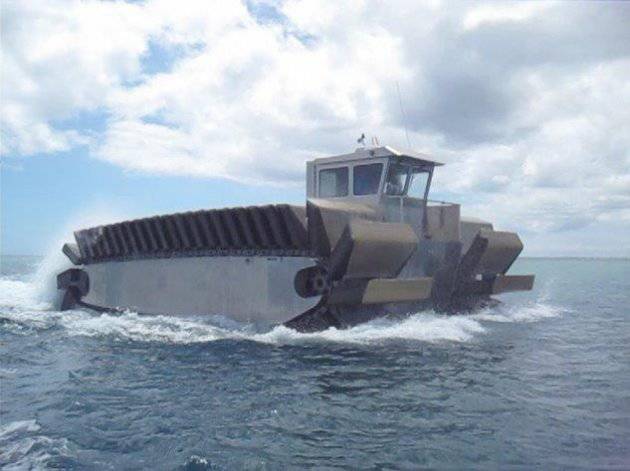 While the UHAC project is at the stage of testing an experimental machine, but already now there is some data on the timing of its completion. A full-scale amphibious UHAC, capable of carrying people and equipment on board, should appear by the end of this decade. If it suits the customers, adoption will take place in the early twenties. In the meantime, the specialists of the Marine Corps Combat Laboratory study the work of the various systems of the prototype machine and check the prospects of the proposed ideas.