The blockade of the Ukrainian fleet in Sevastopol

March 11 2014
142
In addition to the blockade of the Southern Naval Base of the Ukrainian Naval Forces (Naval Forces) in Donuzlav by flooding the decommissioned BOD Ochakov, the Black Sea Fleet of the Russian Navy from the beginning of March organized a blockade of the main forces of the Naval Forces directly in Sevastopol.


The direct exit from Sevastopol to the sea is blocked by a whole “chain” of ten ships, boats and flotation vessels of the Black Sea Fleet, including sea transport of armament Gen. Ryabikov of 323 project, sea minesweeper Turbinist of 266 project, sea tug MB-173 of 733 project, floating crane and six different boats. One more sea minesweeper and two tugs were built around three Ukrainian Navy units stationed in the North Bay of Sevastopol - the U510 control ship Slavutych, the Corvette U209 Ternopol and the sea tugboat U830 Korets. The main number of Naval Forces units is located in Streletskaya Bay, where they are additionally “blocked by” the sea tug MB-23 of the 733 project and two non-self-propelled target ships. 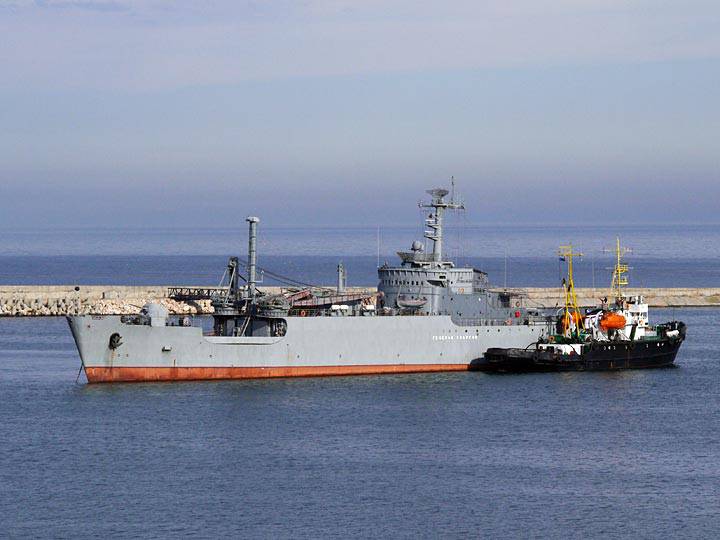 According to the data provided on the forums.airbase.ru web resource, the following units of the Naval Forces of Ukraine are located in Streletskaya Bay of Sevastopol: 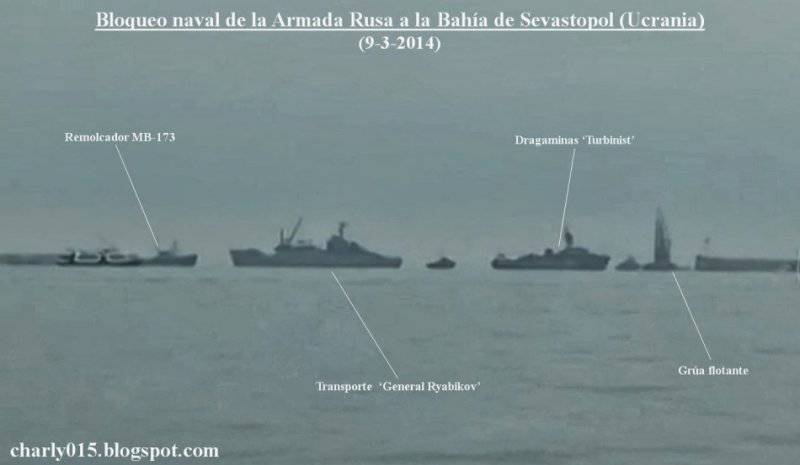 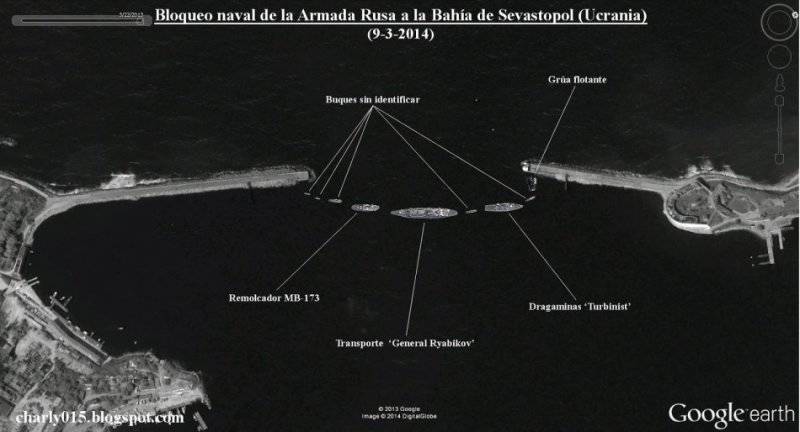 The blockade line of ships, boats and ships of the Black Sea Fleet at the exit of Sevastopol. 09.03.2014 (c) charly015.blogspot.com 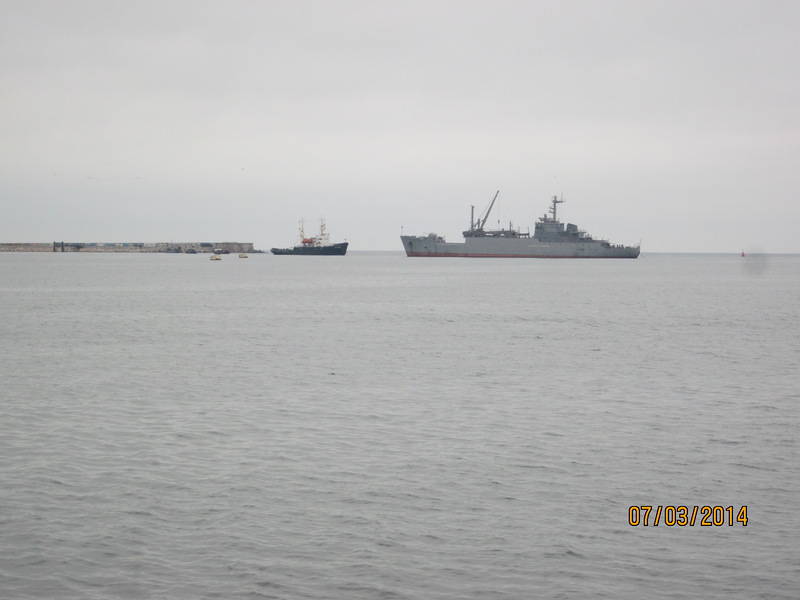 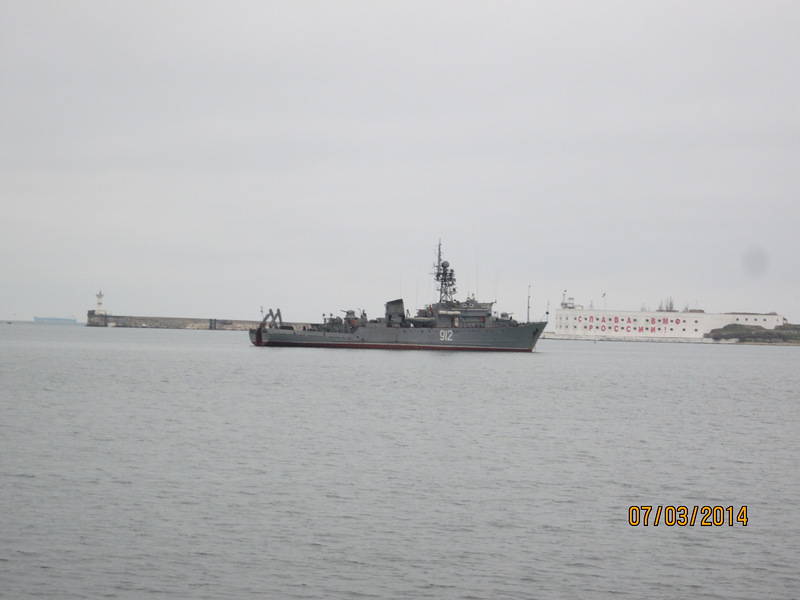 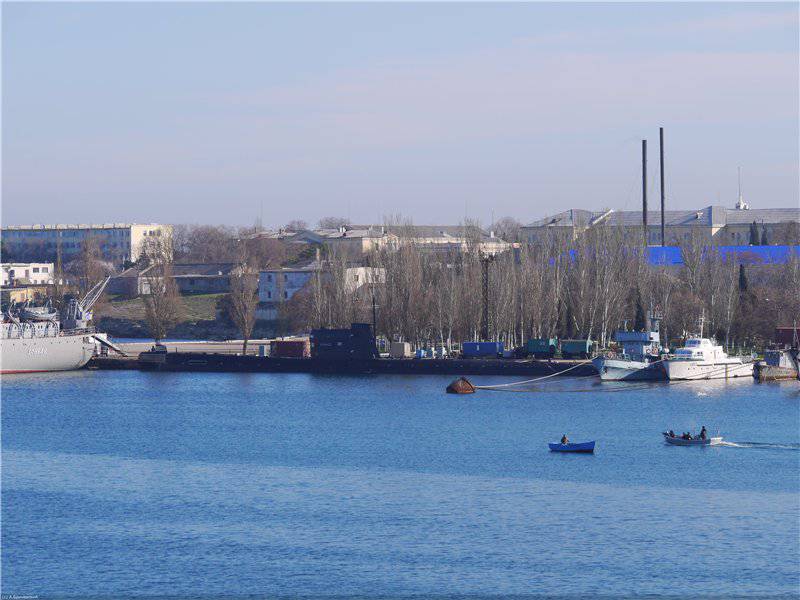 The submarine U 01 "Zaporozhye" of the 641 project of the Ukrainian Navy near the wall in Streletskaya bay of Sevastopol. 03.03.2014 (c) A. Brichevsky / forums.airbase.ru 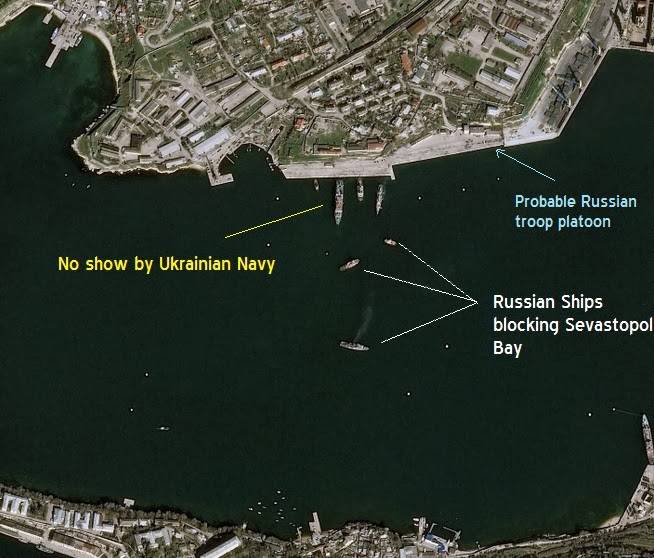 Satellite image of the ships of the Ukrainian Navy, blocked by the Black Sea Fleet ships in the North Bay of Sevastopol. The U510 Slavutych control ship, the U830 Korets tug and the Ternopol U209 corvette, stand (from left to right) near the wall. 03.03.2014 (c) CNES / www.asiandefencenews.com
http://www.youtube.com/watch?v=CXiVUk3P3CE
Video demonstrating Ukrainian Navy ships blocked by Black Sea vessels fleet in the North Bay of Sevastopol - the control ship U510 Slavutich, the sea tug U830 Korets and the corvette U209 Ternopil. 06.03.2014/XNUMX/XNUMX

Ctrl Enter
Noticed oshЫbku Highlight text and press. Ctrl + Enter
We are
In Crimea, raised from the bottom of the BOD "Ochakov"January 27 - Day of the lifting of the blockade of Leningrad
Military Reviewin Yandex News
Military Reviewin Google News
142 comments
Information
Dear reader, to leave comments on the publication, you must to register.