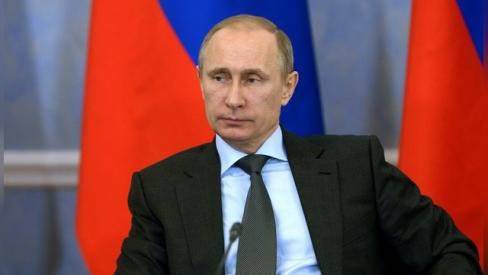 Vladimir Putin is the latest true political figure on the world stage, according to OpENews. Most European leaders often show their weakness and dependence on US opinion. The Russian leader, on the contrary, acts independently and is ready to protect the interests of the country, the newspaper claims.


If you take a look at the political field of the West, then you can meet “political pygmies” rather than statesmen, journalist John Chakman says in his article for OpEdNews. In France, we see the "miserable man" Francois Hollande, who is hated by his own people. He is the “pompous distributor” of American ideas, the author argues. On the "independent voices" of de Gaulle and Chirac can be forgotten.


In Britain, Prime Minister David Cameron, a "weak-tempered" person, also voiced pro-American views. The United States is represented by a person who has “achieved nothing”, except for the “unofficial system of death” created by him, which has reached a truly “industrial scale”.
The American president serves the military intelligence complex as diligently as George W. Bush, the most "ignorant and cowardly" person ever to be president. German leader Angela Merkel has "outstanding abilities." However, few people understand that Germany is acting under the “most burdensome secret treaty” imposed on it by the United States after World War II, the newspaper says.

Putin stands out clearly against this backdrop of independent thinking, keen intelligence, the ability to make decisions and the willingness to act in accordance with the situation, writes Chakman. In Syria, he prevented America from subordinating the local government by bombing, as happened in Libya. In Ukraine, he calmly took steps to protect the region, where many Russians live, and there is also a Russian naval base and the country's “long-standing interests”. The United States claims that Russia has violated international law. However, such statements, rather, should bring a smile to the listener, the author believes. This is said by people whose country killed 3 a million Vietnamese, a million Iraqis, tens of thousands of Afghans, invaded Haiti and Panama, overthrew the governments of Chile, Iran and Guatemala, and now continues to kill people around the world, reminds Chakman. Washington ruling circles publicly “read the notations” of Russia, despite their own “blood soaked” pages stories.

If you listen to Obama and the “mournfully exhausting” John Kerry, you may get the impression that Putin has rashly pushed the world into a catastrophe. However, the author believes, behind this "forced rhetoric" lies a serious irritation caused by the quick and decisive actions of Putin, who managed to "secure the unsafe situation" in Ukraine.

The so-called revolution in Ukraine is a product of the CIA's many years of efforts, the author argues. The US wanted to take advantage of the weakness of the region and get a "military bridgehead" on the border with Russia. Immediately after the overthrow of the democratically elected president of Ukraine, very unpleasant people appeared again on the country's political scene. Among them, Yulia Tymoshenko, the leader of the Batkivshchyna party.

Once, one of the richest women in the country, Tymoshenko, was accused of taking bribes and embezzlement and ended up spending three years in prison for abuse of power, the author recalls. Another remarkable political figure is Oleg Tyagnibok, the leader of the Svoboda party, the “irreconcilable fascist organization”. In Ukraine, as in the Baltics, right-wing, pro-fascist sentiments are strong, the author recalls. During the “revolution”, the far-right parties provided most of the “street thugs” and snipers. There is evidence that they continue to use violence against peaceful protesters, according to the publication.

It would not be an exaggeration to state, the article says, that Putin’s “quick but restrained” actions are in stark contrast to Washington’s “hypocritical voices” that have taken Paris and London. It is well known, the author says, that Washington’s readiness to threaten or bomb “dissenters” is superior only to its monstrous hypocrisy when it comes to law, law or democratic values. This hypocrisy perfectly reflects Senator John McCain, a “corrupt, old scoundrel,” who “pokes his nose” in the affairs of other countries and tries to “ignite the fire of war” in every troubled region.

It is difficult to say what awaits Ukraine, given America’s support for “extremists and thugs,” the newspaper writes. There is hope that Putin will be able to prevent the Syrian or Libyan scenario in Ukraine, and he will be able to replay the current “boring politicians” of the West in geopolitical chess, the newspaper concludes. Especially when Russia's vital interests are at stake.

Ctrl Enter
Noticed oshЫbku Highlight text and press. Ctrl + Enter
We are
Results of the week. “Excuse me, aren't you crazy?” - “No. I have a certificate "US National Security Interests and American Values: Primary and Secondary
Military Reviewin Yandex News
Military Reviewin Google News
99 comments
Information
Dear reader, to leave comments on the publication, you must sign in.