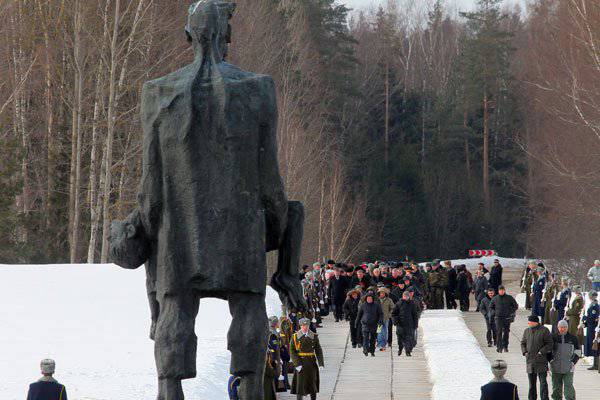 Flirting with nationalists (and this we are seeing today in Kiev) almost always ends with one tragedy. And when the liberals stretch their not always firm, sometimes trembling hand in the hope of acquiring new allies, then from that time the road to catastrophe begins. Nationalists, Nazis - not one of those who prefer the subtle play of liberal political undertones and complex diplomatic intrigues. Their hands don't tremble, the smell of blood makes you drunk. The track record is updated with new and new victims. They are fanatically blindly convinced that the enemies they have killed, and these are "Muscovites, Jews, damned Russians", there must be more, more. And then for nationalism Khatyn time comes.

Khatyn, a world-famous monument of human tragedy: what the Nazis did there in March 1943 of the year - they drove peaceful people, half of whom were children, into the barn of 149, they burned everything in Belarus. But for many years no one ever allowed himself to say out loud from whom the 118 Special Police Battalion was formed.

I think that when Bandera becomes the main ideologue and inspirer on Kiev Independence Square, when the nationalistic slogans of the OUN-UPA begin to sound with new fighting power, we also need to remember what people who profess fascist ideology are capable of.

Until the spring of 1986, I, like most of the inhabitants of the Soviet Union, believed that Khatyn was destroyed by the Germans - the punishers of the special SS battalion. But in 1986, scant information appeared that the military tribunal in Minsk tried a former policeman, a certain Vasily Meleshko. Normal for those times process. This is how the Belarusian journalist Vasily Zdanyuk told about him: “At that time dozens of similar cases were being considered. And suddenly a few journalists, among whom was the author of these lines, were asked to enter the door. The process was declared closed. And yet something was leaked. “Khatyn was hanged onto the police. Vasily Meleshko is one of her executioners. And soon a new message came from behind the tribunal’s tightly closed door: several former punishers were spotted, including a certain Gregory Vasyur, a murderer of murderers ...”

As soon as it became known that Ukrainian policemen were committing atrocities in Khatyn, the door to the courtroom was tightly closed and journalists were removed. The first secretary of the Central Committee of the Communist Party of Ukraine, Vladimir Scherbitsky, specifically appealed to the Central Committee of the Party with a request not to disclose information about the participation of Ukrainian policemen in the brutal murder of civilians in the Belarusian village. The request was then treated with "understanding." But the truth that Khatyn was destroyed by the Ukrainian nationalists who had gone to serve in the 118 Special Police Battalion, has already become a vowel. The facts and details of the tragedy turned out to be incredible.

March 1943 of th: chronicle of the tragedy

Today, after 71 a year from that terrible March 1943 March day, the tragedy of Khatyn is restored almost every minute.

In the morning of March 22, at the intersection of Pleshchenitsy-Logoisk-Trumps-Khatyn road, partisans of the Avenger squad fired at a passenger car in which the commander of one of the companies of the 1943 th battalion of security police Hap Welck was driving. Yes, yes, that same Velke, Hitler's favorite, the champion of the Olympic Games 118 of the year. Along with him were killed several police officers Ukrainians. The ambush guerrillas retreated. The policemen summoned the special battalion of Sturmbahnführer Oscar Dirlewanger. While the Germans were driving from Logoisk, she was arrested, and after a while, a group of local lumberjack residents was shot. By the evening of March, 36 punitive in the footsteps of the partisans came to the village of Khatyn, which they burned together with all its inhabitants. One of those who commanded the massacre of the civilian population was the former senior lieutenant of the Red Army, who was captured and transferred to the service of the Germans, by that time Grigory Vasyura, chief of staff of the 22 Ukrainian police battalion. Yes, it was Vasyur, who was tried in Minsk, in a closed trial.

From the testimony of Ostap Knap: “After we surrounded the village, through a translator Lukovich, the chain came to take people out of their homes and escort them to the barn on the outskirts of the village. Both the SS and our policemen did this work. All residents, including old people and children , they shoved him into a shed, covered him with straw. An easel machine gun was installed in front of the locked gate, behind which, I remember, Katryuk was lying in. The roof of the shed and the straw were lit by Lukovich and a German. In a few minutes the door collapsed under pressure from people, they have become in Run out of the barn. The team sounded: "Fire!" Everyone who was in the cordon was fired: both ours and the SS. I also shot at the barn. "

Question: How many Germans participated in this action?

Answer: "Besides our battalion, there were about 100 SS men in Khatyn who came from Logoisk in covered cars and motorcycles. They and the police set fire to houses and outbuildings."

From the testimony of Timothy Topchiy: "There were also 6 or 7 covered cars and several motorcycles. Then they told me that they were SS men from the Dirlewanger battalion. They were near the company. When they came to Khatyn, they saw that some people were fleeing from the village. Our machine gun crew was given a command to shoot at the fleeing ones. Scherban opened the first calculation number, but the scope was set incorrectly and the bullets did not overtake the fugitives. Meleshko pushed him aside and lay himself behind the machine gun ... "

From the testimony of Ivan Petrichuk: “My post was meters in 50 from the barn, which was guarded by our platoon and the Germans with machine guns. I well saw a boy of six years running out of the fire, his clothes were burning. He took only a few steps and fell, smitten a bullet. Some of the officers who were standing in that direction shot at him. Maybe it was Kerner, and maybe Vasyur. I don’t know if there were many children in the barn. When we left the village, he was already burning down , there were no living people in it - only burned corpses, big and small, were smoking ... This picture was horror oh. I remember that from the battalion led Khatyn 15 cows. "

It should be noted that in German reports on punitive operations, the data on the people killed, as a rule, are lower than the actual ones. For example, the report of the Gebitskommissar of the city of Borisov on the destruction of the village of Khatyn states that 90 people were killed along with the village. In fact, they were 149, all set by name. 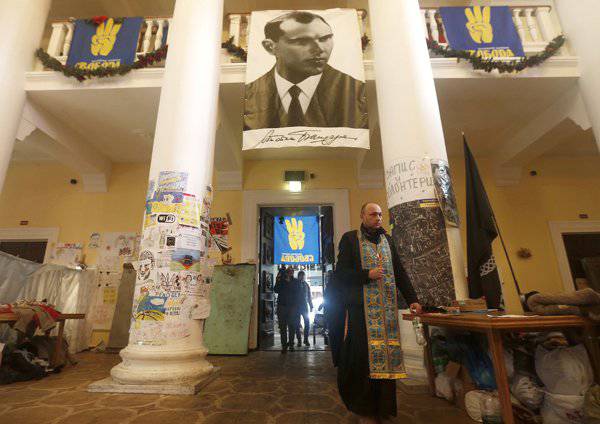 January 2014 of the year. Bandera became the banner of the Maidan

This battalion was formed in Kiev in 1942, mainly from Ukrainian nationalists, residents of western regions, who agreed to cooperate with the occupiers, underwent special training in various schools in Germany, put on a Nazi uniform and took the military oath of allegiance to Hitler. In Kiev, the battalion "became famous" for destroying the Jews in Babiy Yar with extreme cruelty. The bloody work was the best feature for sending punitive in December 1942 year to Belarus. In addition to the German commander, at the head of each police unit was a "chief" - a German officer who oversaw the activities of his charges. The chief of the 118 police battalion was Erich Körner, the Sturmbannführer, and the same boss of Hans Velke. The battalion was formally headed by a German officer, Erich Körner, who was 56 years old. But in fact, Grigory Vasyur was in charge of all affairs and enjoyed the unlimited trust of Kerner in conducting punitive operations ...

The 14 volumes of the N 104 case reflected many specific facts about the bloody activities of the punisher Vasyura. During the trial, it was found that they personally destroyed more than 360 women, old people, and children. By a decision of the military tribunal of the Belarusian Military District, he was found guilty and sentenced to death.

I have seen black and white photographs from that process. I read the conclusion of a psychiatric examination that Vasyura GN in the period 1941-1944. any mental illness did not suffer. In one of the photos on the dock - a frightened seventy-year old man in a winter coat. This is Grigory Vasyura.

The atrocities in Khatyn were not the only ones in the record of the battalion, which was formed mainly from Ukrainian nationalists who hate Soviet power. 13 May Grigory Vasyura led the fighting against partisans near the village of Dalkovichi. May 27 battalion conducts punitive operations in the village of Osovi, where 78 people were shot. Further, the operation "Cottbus" on the territory of the Minsk and Vitebsk regions - the massacre of the residents of the village of Vileyka, the destruction of the inhabitants of the villages of Makovye and Ubrok, the execution of 50 Jews near the village of Kaminskaya Sloboda. For these "merits" the Nazis assigned Vasyure the rank of lieutenant and awarded two medals. After Belarus, Grigory Vasyura continued to serve in the 76 Infantry Regiment, which had already been defeated in France.

At the end of the war, Vasure managed to cover his tracks in the filtration camp. Only in 1952, the court of the Kiev Military District sentenced him to 25 years of imprisonment for cooperating with the occupiers. At that time, nothing was known about his punitive activity. 17 September 1955 of the Year The Presidium of the USSR Supreme Soviet adopted the Decree “On Amnesty for Soviet Citizens who Cooperated with the Occupants of the Great Patriotic War 1941 - 1945”, and Gregory Vasyura was released. He returned to his Cherkasy region.

When the KGB officers found and again arrested the criminal, he was already working as deputy director of one of the state farms in the Kyiv region. In April, 1984 was even awarded the "Labor Veteran" medal. Every year he was congratulated by the pioneers of 9 May. He loved to speak in front of schoolchildren in the form of a real war veteran, a war veteran communicator, and even was called an honorary cadet of the Kiev Higher Military Engineering twice twice banner of the Red Banner of Communications named after M.I. Kalinin - the fact that he graduated before the war.

... The famous French publicist Bernard-Henri Levy believes that today the best Europeans are Ukrainians. Presumably, it is precisely those who besiege Orthodox churches, set fire to the houses of their political opponents, shout "go out!" everyone who does not like Bandera freemen. Already spread out loud from the right-wing nationalist radicals - kill the communist, Jew, Moskal ...

Apparently, philosophical views do not allow that these harsh guys on the Maidan, the glorious great-grandchildren and followers of the leader of the Ukrainian nationalists in 1940 - 50-ies Stepan Bandera, are ready to make history with weapons. And the philosophical debates are hardly located. The philosophy of extreme nationalism was the same gross and radical everywhere and at all times - power, money, power. The cult of their own superiority. The punishers demonstrated this to the residents of the Belarusian village of Khatyn in March of 1943.

In the Khatyn memorial, where only burnt chimneys with metronomes on the site of the former houses, there is a monument: the only blacksmith who survived was Joseph Kaminsky with his dead son in his arms ...

In Belarus, it is still considered humanly impossible to say out loud who burned Khatyn. In Ukraine, our own brothers, Slavs, neighbors ... Every nation has thugs. However, there was such a special police battalion formed from Ukrainian traitors ...