New Post-Soviet Scenario: Why the West Should Carefully Act in Ukraine 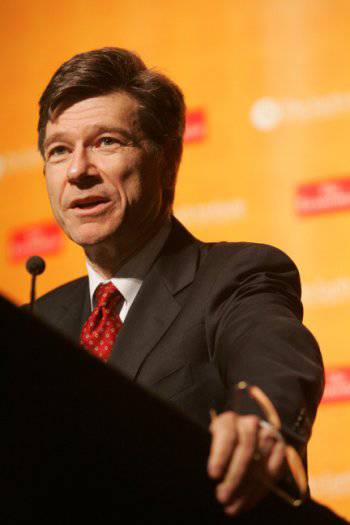 AUTHOR - JEFFRE SAKS, well-known American economist, Ph.D., director of the Earth Institute at Columbia University, one of the authors of the policy of "shock therapy" in Russia, Poland, Bolivia, head of the group of economic advisers to President Yeltsin from 1991 to 1994, special adviser to the UN Secretary General on poverty alleviation. According to Time magazine, he was twice among the most influential world leaders in 100.


Events in Ukraine unfold rapidly; political and economic crisis develops into military confrontation. The mass uprising in Kiev, which overthrew the corrupt and incompetent regime of Viktor Yanukovych, accomplished this outside of a clear legal framework, allowing for the restoration of democratic rule and a stable and responsible policy towards Russia.

After Yanukovych fled Kiev, the Ukrainian parliament instantly decided to repeal the law defining the legal status of Russian and other minority languages ​​(although this decision was later reversed). Russia responded to the overthrow of Yanukovych, which was viewed as an illegitimate putsch, and to the actions of parliament, in which the attack on the rights of ethnic Russians was spotted, by the military occupation of the Crimea, where its Black Sea fleet is based and mainly Russian-speaking population lives.

The United States and other Western powers responded with threats of sanctions and other countermeasures against Russia. Clearly exaggerated statements from both sides - in the West about returning to the Cold War, in Russia about the seizure of power in Kiev by the Nazis - continue to fuel the crisis.

Considering this chain of events, it is difficult not to recall the devastating series of miscalculations that led 100 years ago to World War I. The situation in Ukraine is just as fraught with the possibility of dangerous miscalculations from all sides, growing on the basis of heated opinions and arrogance.

All four sides of the crisis - Russia, Ukraine, the United States and the European Union - are obliged today to recognize the dangerous consequences of further escalation. Russia in Crimea has taken actions that are illegal from the point of view of international law. But this is not the basis for an arrogant and doomed West reaction that can transform a dangerous situation into a catastrophe. This crisis can still be resolved reasonably and peacefully. It can even be done for the benefit of all parties. But it requires not only the restoration of the territorial integrity of Ukraine, but also the recognition of the legitimacy of the interests and concerns of Russia.

Any Ukrainian government - especially such as the current transitional one acting as an interim government - has a pragmatic need for cooperation with its powerful neighbor.
Western powers themselves are obliged to recognize the limited legitimacy and scope of authority of the current transitional government. Western leaders have to tell the leaders in Kiev the truth - Russia is a powerful neighbor, the main trading partner, a source of Ukrainian energy resources and the main creditor. The West should emphasize that it is impossible to simply want to get rid of the inevitable influence of Russia in Ukraine.

I have observed previous cycles of distrust close up. At the beginning of 90, when Russia was a democracy that had just gained independence (I served as an adviser to Prime Minister Yegor Gaidar in 1992 and 1993), the United States could not provide Russia with the financial assistance that was urgently needed to stabilize the economic crisis the result of the collapse of the Soviet Union.

The Russian people, and no doubt Russian President Vladimir Putin, have learned a lesson from this experience: at a critical moment, the United States was not interested in helping even a democratic Russia in a truly desperate economic situation. The Russians came to the conclusion (unfortunately true, from my point of view) - they should not especially trust the United States in defending Russia's fundamental national interests. And among these interests will always be the security of the vulnerable western flank of Russia.
In pursuing its interests over the past two decades, Russia viewed the West as a periodic antagonist and rival. In the past few years, the EU’s demonstrated desire to conclude a trade agreement with Ukraine has little contributed to dispelling Russian suspicions. Such an agreement would turn Ukraine’s economy towards Europe and from Russia, which would lead to economic losses for the Russian Federation in the form of loss of trade and investment ties.

Moreover, Russia fears that where the European Union is heading, NATO may soon come. Russia has already watched with great concern the expansion of NATO in Eastern Europe. With considering historical the memory of the many monstrous wars that she waged on the western borders, Russia's fears are understandable.
Russia also sees the obvious practice of double standards. The European Union and NATO are getting closer and closer to the Russian borders. However, when Russia tries to form the Eurasian Economic Union, which includes Belarus, Kazakhstan, Kyrgyzstan, Russia and, possibly, Armenia, Western critics immediately accuse it of trying to recreate the empire.

None of the above in no way justifies Russia's violation of international law when sending armed forces to occupy part of Ukraine. I do not condone such illegal actions, but only offer a context and explanation for them.

From my point of view, Russia does not at all try to provoke hostilities with the West, and even less does not seek to recreate the Russian Empire, as some promising Western commentators try to imagine. Russia is guided by sincere concern rooted in its history and what it considers to be its national interests, including basic national security. She is worried about the hostile Ukraine, caught in the grip of anti-Russian sentiment in Kiev, and the likelihood that the West will try to play a card of these sentiments.

The fact is that the stability of Ukraine can be achieved only in cooperation with Russia. And such cooperation can be realized only with a conciliatory, rather than antagonistic approach to resolving the crisis on the part of the Western powers. Instead of resorting to aggressive economic and political intervention in Ukraine, the West should encourage and encourage Russia and Ukraine to establish long-term and mutually beneficial relations.

The European Union and the United States can help this prospect that is beneficial to all, not by sanctions, but by methods of calm diplomacy both in Kiev and in Moscow. Part of the deal, of course, would be the preservation of Ukrainian sovereignty and territorial integrity.

Undoubtedly, the desperate financial situation of Ukraine requires immediate attention. The country's external debt has skyrocketed in recent years, and now this debt is demanded to be repaid. It can not be paid, and it is impossible to refinance without emergency measures.

The West can valiantly talk about financial assistance to Ukraine, but this is fantasy. Despite the bravado of the last days, the West is not really able to shoulder all the costs of financially improving Ukraine. The United States pledged to provide $ 1 billion in loan guarantees, but this does not help much given the fact that the Ukrainian current account deficit is estimated at about $ 13,5 billion this year.

And if Ukraine will irrevocably sever relations with Russia, expenses will soar even higher - definitely higher than any price that the West would be willing to consider. On the other hand, in the event of the restoration of rational relations between Russia and Ukraine, the Russian Federation would probably be ready to work together with Ukraine and the European Union to help finance the country's economic reorganization.

It is important to realize that Ukraine is in a completely different position than Poland or other post-communist countries to the west of it. The Ukrainian industry is largely intertwined with the Russian industry. Ukraine is much more dependent on Russia in the energy sector. The geographical position of the country makes it difficult to attract foreign investors from Western Europe, unless in conjunction with the Russian industry, which also includes Russian markets and Russian enterprises. In short, Ukrainian economic reality reflects its geographic reality. Ukraine is connected with Europe, and with Russia, and is unable to break ties with one of the parties, perhaps with a destructive price.

Both Ukraine and Russia should be ready for an important and quick breakthrough due to closer cooperation with the European Union and due to the growth of mutual trade. Both Ukraine and Russia are in dire need of updating their industry. In the case of Ukraine, including, it refers to heavy industry, for example, metallurgy. Over the next decade, Russian potential will manifest itself in more complex industries, such as aviation, automotive, railway, aerospace and industrial engineering (such as equipment for the mining industry and agriculture). However, Russia can become competitive on the international market in these sectors only through closer production and investment ties with major European manufacturers (especially with the main German industrial companies).

To achieve such a mutually beneficial scenario, the West will need what it clearly lacks since the end of the Cold War: long-term joint thinking about actions with and with Russia. Russia, of course, should abandon threats against Ukraine and fully restore the sovereignty of the Crimea.

But the West should also provide Russia with the security and guarantees of the economic cooperation it needs. This implies closer economic cooperation between Russia and the European Union; respect for Russia's efforts to establish closer economic ties with its own Eurasian neighbors; the support of the Ukrainian government, equally respectful of both Russia and the European Union, and not one that threatens the security and economic interests of Russia; and respect by all parties to the borders and national sovereignty of Ukraine.

The European Union, Russia, Ukraine and the United States are equally interested in the system of international law and foreign policy behavior, which is determined not only by national convenience and profit, but by the need for deeper cooperation. It would be wise if all four parties followed this principle today. In this way, they will be able to avoid the escalation of the current crisis — a crisis that could be crowned with tragedy, if verbalization and bombast prevail over reality.

This article is a translation of a material originally published in Foreign Affairs 5 March 2014. © Council on Foreign Relations. Distributed by Tribune Media Services

Ctrl Enter
Noticed oshЫbku Highlight text and press. Ctrl + Enter
We are
Bolivian Armed Forces. How a country protects itself in the AndesPrime passion. Who will replace Yatsenyuk as prime minister of Ukraine?
Military Reviewin Yandex News
Military Reviewin Google News
76 comments
Information
Dear reader, to leave comments on the publication, you must sign in.