Obama in the Looking Glass

March 11 2014
94
In recent years, the American administration has almost plummeted into the abyss. It should be noted that the US Democratic Party President is doing this. All American ordinances even sound crazy. It now remains for Obama to issue only a resolution to subordinate the Russian army directly to himself, confiscate the Strategic Missile Forces in favor of the Pentagon and forbid the Russians to pray to God, and appoint the Lord responsible for the American military budget. This is probably an attempt to intimidate the Russians, but most likely the result will be unexpected. 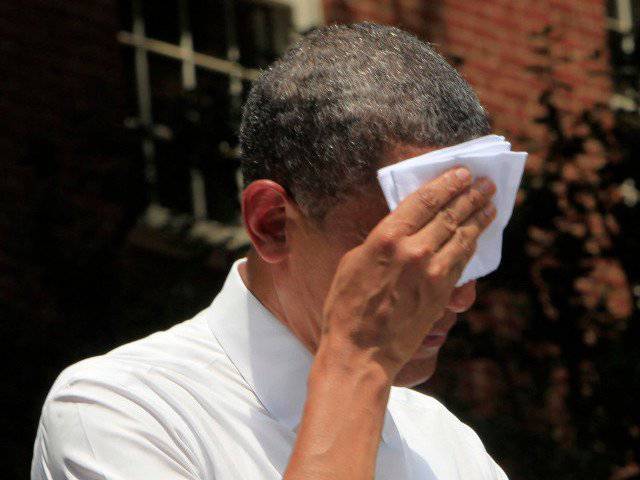 No matter how the Westernization of Ukraine’s takeover is planned, nevertheless, in some way incomprehensible to it, it turns out exactly the opposite. Say, Obama's desire to “arrest-confiscate the property of the haves of the Russians,” the majority of Russians do not scare. If Obama shakes Russian fat cats, it will not offend anyone, but nobody will love Obama anymore. But the cats themselves now need to think where to put their money. Everyone knows that if money lies in nothing invested, they quickly melt. The only way to save or increase them is to invest, but the West is now not safe in the sense of deposits. The fact that cats stole money now will try to attach already in Russia, will meet with the understanding of ordinary citizens. If you stole money, then at least invest it in Russia. This same fact will force the oligarchs to be more loyal to Putin, because now he can literally control the wallet of the oligarchs, and this is the very egg in which the needle is a Koschee death.

So Obama is unlikely to win something from the sanctions, rather he will lose. But Russia may well benefit from this, and at the level of ordinary citizens. Russian citizens from this Obama, of course, will no longer love, rather the opposite. Obama's main goal is clear - to press Putin through his inner circle, but this is another, already twenty thousand first, mistake of the Americans. It will be a problem for Obama if someone puts pressure on Coca-Cola’s company and throws it out of the Russian national market due to the policy of the American administration, then Obama will be slapped on the ears and mercilessly demand that everything be fixed immediately and shut up before the end of the presidential term. In Russia, everything works exactly the opposite. Any oligarch will grab a seven and quickly live in a cell in some correctional colony and the number of 10, a general regime in the city of Krasnokamensk, the Chita region. And the people will welcome it, because as an oligarch. But it is the Ukrainian oligarchs who are responsible for what is happening in Ukraine today.

Issues of social justice still arise in Ukraine, already during this year. New authorities do not keep the situation when pensions are not paid, and production stops. But the main question is that the people understand the injustice of what is happening. The most vivid example. The head of the Dnepropetrovsk Regional State Administration lives in Switzerland, why should he organize life in a foreign city for him? Why should he strive to improve the standard of living and safety on the streets of the cities, it’s alien to him история. The question is not why all gentlemen nonche in Paris. The question is how much Dipropetrovsk sipai will tolerate before they begin to rip the bellies of Dnepropetrovsk, Donetsk and Kharkov maharajas and burn their palaces, which very often surpass Buckingham. Do not consider the greatest of the greats themselves that it is better to live in Switzerland because it is safer there? Modern life refutes this thesis.

The fact is that if Obama dared to arrest any accounts of any Russian oligarchs, then Putin, under the same conditions, could arrest foreign assets in Russia. Will you tell them a little? In fact, there may be thousands of times more than the Russian throughout the world. The fact is that Russia was not allowed into the world, so there are mainly accounts of “honorable and influential citizens” who do not have any benefit for the Russians, but Russia was very open and now, probably, there is not a single bank or automotive industry a corporation that is not represented in Russia. Perhaps the banks will be able to withdraw assets, but blocking the bank’s activities, which have thousands or even tens of thousands of branches throughout the country, is the collapse of the Western economy, as fast as a heart attack. The thing is that as soon as Putin arrests US assets of at least a few companies, the stock exchange will die instantly. The ratings of huge companies will fly to Tartar. Billions of derivatives are tied to each company. In total, these will be trillion-dollar losses ten times higher than the US GDP.

If the reader would like to understand in more detail, then you can highlight this part to make it clearer. Suppose a bank owns some shares of a Russian raw materials company. Oil or gas is firmly on the market and bring a steady income to the bank. His rating is high and unshakable. Now let's imagine that Obama has selected businesses in the US from Russian companies. Putin entered the mirror and refused to pay the yield on their shares purchased by a Western bank and generally declared them invalid, and at the same time forbade them to challenge their actions in court. What will happen to the bank? Of course, it will roll down. However, other banks have shares of a lop-sided bank, and these shares also become rubbish, but the third bank also has shares of the "second-lonely side" - the process repeats. Panic and financial collapse begins. Of course, in life the process is more complicated, but the mechanism is exactly the same. Well, who suffered, you tell me. Russia, of course, can be called injured, but the Western economy can be considered lost. Obama is standing in front of the abyss and is trying to take another step. Most likely he is already explained that he is deeply wrong. The consequence for the West will be an order of magnitude or two more. It seems that Obama is playing with a dynamo, which can apply an electrical discharge to a chain of mined banks. It's simple: the pen scrolled and pressed a button. We look to Russia - everything is in place, looked back in the direction of the house - maat-peremat!

In general, the author considers such sanctions absolutely unrealistic, and in fact this is just another bluff, only Putin doesn’t believe in it for a long time. Meanwhile, it became known that the past information about blocking American pork has already harmed the United States. In business circles, Obama today has a very unpleasant image of a near man. The fact that the Republicans got into the story of the “debt ceiling” and simply destroyed their image to the ground is leveled by the inept actions of the American president, who, as we know, is a democrat. In general, the next presidential elections in the United States will show that only completely inefficient parties, which run strictly on rakes, seek power. This is a huge problem today for America. Harm to American companies is done by American power itself through its architecture and completely inadequate actions. It would be much more comfortable for business to do business in Russia and this cannot be compared with the business benefits from Ukraine. These are absolutely political aspirations that will surely plunge the country into even greater difficulties in the very near future.

The referendum in the Crimea for Putin is an absolute imperative, and the reaction to him of Obama or anyone else is a minor statement. However, with all this interesting position of Germany. Being more restrained, Frau Chancellor will not support increasing the level of confrontation with Russia. It simply provides an opportunity for Putin to fill Obama with a face, and if tensions escalate, this will surely happen and Germany will benefit from it, because it will make it possible to shorten US ambitions and continue to receive dividends for his weighted position. This is a short-term position, but nothing has changed in Germany for a long time. The main task of Germany is to develop new lands, seize assets, bankrupt competing enterprises (first in Ukraine) and push the boundaries of its influence strictly east. In pursuing these goals, Germany is very skeptical and will even be wary of possible sanctions against Russia. All this suggests something unexpected. It seems that Putin is forcing the American president to shift the political interests of the United States from business interests into non-intersecting planes, and some of them are in the looking-glass. This can cause extremely negative developments in the economy, which already breathes its last. Source: http://contrpost.com/index.php/80-ssha/18186-obama-v-zazerkale