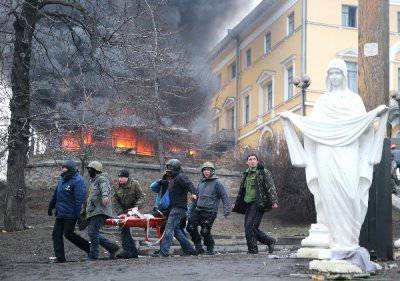 Color revolutions, which flare up with enviable periodicity in all parts of the world, develop in approximately one scenario. At first, a completely peaceful opposition goes to a completely peaceful rally and occupies the central city square. The demonstrators, for the most part, look civilized and noble. Usually this is the “golden youth” who have graduated from the prestigious universities of the USA and Europe. Protesters are organized and managed through social networks. At one time, the first Leninist revolutionaries took great risks, transporting the Iskra, Pravda newspapers and revolutionary proclamations from neighboring states. And now Zuckerberg globally facilitated the revolutionary processes by creating a social network adapted for any region. Any revolutionaries are now controlled via iPhones and iPads from a certain virtual center.


Confrontation, the beginning. This is the first and peaceful phase of any color revolution. Fiery speeches that protesters say in the town square are simple and clear to everyone. They talk about the dominance of corruption, the corruption of officials, about embezzlement, about integration into the world and European community. These beautiful and correct speeches are widely supported among the masses. A large number of intelligentsia, green students and ordinary gopniks adjoin the demonstrators. The number of protesters grows to a certain critical mass, and protest moves into the next phase.

The first phase of the confrontation. It also takes place quite peacefully. The authorities are simply concerned about the huge number of people in the city center. For such a mass of people need to eat, sleep, and, sorry, go to the toilet. There are not enough toilets for all the protesters, so the demonstrators are spoiling in the most inappropriate places. The protest area acquires the specific smell of an unwashed human body and human feces. In order to establish a minimum order, the authorities send an ordinary unarmed police (militia) to the scene. Law enforcement officials are provoking protest sentiments among the protesters. Revolutionary leaders appear calling for the construction of barricades and the seizure of government buildings.

The second phase of the confrontation. Active butting with the authorities. By this time, the authorities are simply obliged to respond to what is happening. The city center is paralyzed by barricades, government buildings are seized and do not work. Usually, the authorities are involved in the process of curbing street unrest of conscripts from internal troops or a police battalion consisting of the same soldiers of the oaths. But the protesters win as much as the local victories over the finer conscripts, and this is very encouraging to the demonstrators. Then the authorities are involved in the events of the special forces, this is the riot police, SOBR or the "Berkut". But what can the riot police or the "Berkut" do when there are several hundred thousand protesters? In two or three days, riot policemen are falling down from exhaustion and lack of sleep.

In parallel with the phase of confrontation, another phase is underway, which many do not even realize. Call it conditionally the phase of exhortation. At this time, representatives of the “peace-loving world community” begin to actively communicate with the president of the country. In parallel, representatives of the “peace-loving world community” go to the barricades and feed revolutionaries with dried biscuits. And the leaders of the country are calling world leaders about in telephone conversations warned about the inadmissibility of bloodshed. Scare sanctions or economic blockade. They give some guarantees and promise references. Telephone conversations with world leaders have a magical effect, because you can promise anything, for telephone conversations are conducted without protocols and on secret government communication. Charged with telephone conversations, the president of ex-Yugoslavia Milosevic came at one time, more than once they called Saddam Hussein, called Kyrgyz President Askar Akayev and his heir Bakiyev, and called Colonel Gaddafi and Syrian Assad. Local mass media report such conversations delicately that the president had a telephone conversation with the leader of a powerful state. But all these conversations and promises are forgotten after the onset of the bloody phase of opposition.

Bloody phase. During the confrontation-butting phase, a qualitative replacement of the protesters takes place. Green romantic young men with ipads disappear from the barricades, intellectuals and office plankton disappear, their place is taken by tough old men familiar with the tactics of street fighting. Severe guys and act sternly. Bottles with Molotov cocktails, cobblestones, batons, catapults, bulldozers, hunting and gas weapon. Every effort is made to provoke riot police or the "Berkut" to violent retaliatory actions. But the riot police or the "Berkut" are not provoked, and they don’t want to spill the blood of their compatriots. At this moment mysterious snipers appear on the scene of events. This is a kind of wick, thrown from the side into a boiling fire hazard mass.

Mysterious snipers. They are quickly forgotten and strenuously pretend that there were no snipers at all.

The first mentions of mysterious snipers appeared in 1991 in the confrontation in Vilnius at the TV tower. Then the mysterious snipers shot peaceful demonstrators for the first time. Vilnius authorities filed charges against the Soviet Army and the CPSU. Several people from the military and party workers were sentenced to long prison terms. The collapse of the Soviet Union and the discrimination of the Soviet Army began with this sniper fire in Vilnius. And the new authorities in Vilnius have long been silent about the fact that the demonstrators were killed with the latest Mauser rifles, which were not in service with the army and special services. And one demonstrator was shot at all from a three-lane, which was removed from the weapons of all armies.

A little later, snipers were noted in Moscow, in 1993, in the process of punching Yeltsin with other branches of government. At that time, there was a roller on YouTube, on which, under an ordinary Moscow street bridge, police put a pile of corpses with neat holes in their heads. The team of the victorious Yeltsyna insisted on their bloodless victory, so they simply kept silent about those who died during the clashes.

In the first Chechen, mysterious snipers on the streets of Grozny shot Russian soldiers and officers under the lower section of a bulletproof vest, practically in the groin. Soldiers rumor carried these shots to the groin at the expense of a certain squad "White Tights"

August 2008. Events in South Ossetia. Again snipers. The shooting of Russian armored columns on the outskirts of Tskhinvali. These events are described in their reports by the special correspondent of Komsomolskaya Pravda, Alexander Kots. Kots himself was saved by the major of the Russian army of Ham who died in that battle. Kots describes the attackers as Amazons in camouflage with МХNUMX rifles at the ready. By the way, there were no women's units in the Georgian army. So the origin of the Amazons in camouflage is difficult to explain.

2010 year, the revolutionary events in Bishkek. Mysterious snipers from city roofs shoot 80 people. No sniper found or installed. But the then acting president of Kyrgyzstan is enrolled in “bloody tyrants” and overthrown.

Snipers, shooting in the groin, appeared in a completely different region. The bloodshed in Syria also began with sniper shots in the city of Ham, where 67 peaceful demonstrators were killed by unknown snipers. By the way, the Syrians have learned how to fight snipers. Snipers are shot from machine guns without any pity and on Syrian television often twist videos where snipers circled in red circles run on the roofs.

Yemen 2011 year, during a peaceful demonstration in 17 demonstrators killed by fire snipers. The dead were written off to the account of the government’s own secret services and everything ended with a government coup.

Tunisia, 2011 year, 24 man killed by sniper fire. In the course of further unrest, the president and the government fled, other people came to power.

2013 year. Events in Libya began with the shooting of a peaceful demonstration in Benghazi. Ukrainian nurses working in Libyan hospitals talk about a large number of injuries in the stomach and groin. Sniper shots attributed to the guardsmen Gaddafi, the people rose and Gaddafi overthrew.

And the same mysterious snipers appear on the streets of Kiev. Demonstratively shoot the special forces in the left eye. Many innocent people die, but the goal is reached, the victims are written off as “bloody regime”, subsequent hysteria in the media and complete chaos in the state. Requirements to bring to justice Yanukovych and security officials. Investigation of the fire of snipers is assigned to non-military or ballistami, the investigation is entrusted to a perhydrol blonde with a tenth-grader's intellect. Everything has been done so that Kiev snipers remain unknown.

As a confirmation of the version about snipers ... We read the book "The Art of the Sniper", published in 2009, by Alexey Andreevich Potapov. Book here: http://shooting-ua.com/force_shooting/practice_book_58.6.htm#7-23.

We read carefully the 7 section of this book: "Basics of sniper tactics." We find a subsection titled "SNIPERS AGAINST THE FIGHT IN THE CROWD". I quote:

“In the world practice of the police and the special services, there happens another unpleasant moment, or rather, an ugly political device of all kinds of opposition. Fight in the crowd. It lies in the fact that during mass events - rallies, demonstrations, etc. - when passions run high, a fight is provoked. To stop her, of course, jumps the nearest police outfit. His arrivals are already awaited, and police are attacked by superior forces. To the rescue of the beaten colleagues, a more numerous detachment of policemen is being advanced, which is forced to make its way through a specially created dense crowd, and the opposition agents deliberately create conflict situations, bringing the policemen to brutality.

The clubs begin to go. The atmosphere is heating up. A general fight begins. Brutalized policemen beat with batons both the right and the guilty. A squib is thrown into the ranks of the police. There is a crash. Under this crash, the opposition sniper from the attic or other convenient place for shooting shoots anyone unaware of the events of the onlooker who happened to be near the carnage. The crowd goes wild. The sniper does not necessarily shoot at the average man. A sniper can shoot a speaker at a rally, which the opposition will "substitute". A sniper can be shot down by a high-ranking or influential person who is present at a mass event (which the opposition also substitutes).

Someone throws a grenade. Chaos and crush begin. The opposition blames the authorities for all the victims. A bloody conflict is the best way to budge the political inertia of the population. The main thing is that this ice should start (a familiar phrase is familiar to everyone), and then political events will be dispersed by insane energy of the masses, who will always and in any political regime be dissatisfied with something. Then, of course, everything will return, as it was, but already under new policies. Fools never understand. ”

Surprisingly, the author of the book, Alexei Andreyevich Potapov, predicted the Kiev events of 2014. Although, quite possibly, his book was taken as a scenario of a military coup ...

Ctrl Enter
Noticed oshЫbku Highlight text and press. Ctrl + Enter
We are
The personnel resource of the “color revolutions”: on whom does the USA rely in provoking chaos?Active phase of Sea Breeze 2013 exercises completed
Military Reviewin Yandex News
Military Reviewin Google News
15 comments
Information
Dear reader, to leave comments on the publication, you must sign in.