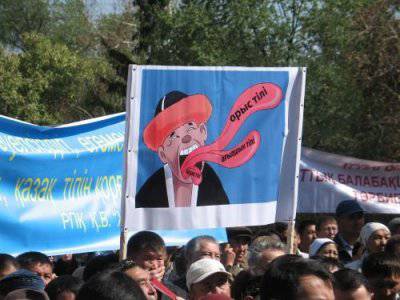 Will the government go to rapprochement with the Kazakh nationalists?


The Ukrainian crisis has awakened the Kazakh nationalists who were still dozing in their “circles of interests”. Earlier this week, they announced their intention to gather all the protest forces on April 12 to announce an anti-Eurasian forum. It is not clear how the authorities reacted to this statement, but there is no doubt that Ak-Orda will not sit back.

The Kazakh opposition is often characterized by the epithet “tame”, and the recent история with the devaluation of the tenge clearly demonstrated this. Opponents of the authorities didn’t show themselves at all these days, unless a portion of sharp criticism in social networks. Kazakh nationalists also preferred to keep silent, although today they are called the only force that can still stir up the people. Perhaps the national-patriotic organizations themselves are weak, but almost the majority of the state-forming ethnos, the Kazakhs, are behind them. And the degree of threat posed by this protest group is well recognized in Ak-Horde.

Take, for example, the Eurasian Union, which will begin to fully function on January 1 and 2015. His opponents in the face of the Kazakhs, who fear for the independence of the country, are quite enough to predict a possible repetition of the Ukrainian scenario in Kazakhstan. Moreover, the events in the “Square”, in the opinion of political scientist Talgat Mamyrayymov, can be projected on how Russia will act when creating the Eurasian Union in relation to Kazakhstan. “It will force us into joining it in every way,” he is confident, “including with the help of power tools. And therefore, Ak-Orda is now working to create logistics to secure its relations with Moscow and neutralize possible risks. In particular, it is trying to strengthen ties with the Turkic world in order to create a certain circle of strategic partners that can be relied upon to exacerbate the situation on the issue of Eurasian integration. ”

But it is precisely the advances of the Kazakh leadership with Pan-Turkism that inspire the growth of support for this generally anti-Russian doctrine in the country, Ukrainian political scientist Mikhail Plavl believes, fearing that the consequences of this process may not be the most optimistic. “In my opinion, the situations with the Russian-speaking, Russian and Russian-cultural community in Ukraine and Kazakhstan are not identical. Nevertheless, if the conflict in Ukraine is more cultural in nature, in Kazakhstan the “watershed” is purely ethnic. This is the complexity of Ukraine and the risks of Kazakhstan. Anyway, in Ukraine it is impossible to imagine ethnic cleansing. As for Kazakhstan, if we are talking purely hypothetical, there civil conflict can take such threatening forms, ”said a political expert in an interview with Radiopoint.

In a word, everything logically goes to the fact that the Kazakh authorities can gain courage and abandon the dangerous union. In addition to external strategic partners, it will need the support of society in the face of Kazakh nationalists. It is likely that the official announcement of the anti-Eurasian forum is the beginning of the whole campaign ...

In order to assess the potential for cooperation between the authorities and the national-patriotic movement, we turned to domestic experts studying these processes with the question: “Do you think the government will start flirting with Kazakh nationalists, fearing a repetition of the Ukrainian events in Kazakhstan?”.

Marat Shibutov, representative of the Association of cross-border cooperation:

- Let's first talk about the background of the issue. What is the Maidan in the political sense? This is a rebellion of right-wing parties (center-right “Batkivshchyna” and “Blow”, nationalists from “Freedom”) and the ultra-right public movement (“Right Sector”) against centrists from the “Party of Regions”. That is, if we draw an analogy with Kazakhstan, these are national populists and national democrats against Nur Otan. But where did such powerful right-wing parties in Ukraine come from?

The fact is that Yanukovych, being a not very clever man, decided to turn the following operation on when he came to power:

1. Consistently got rid of strong figures in the “Party of Regions” (for example, Yevgeny Kushnarev from Kharkov died “accidentally” during a hunt) and prominent politicians with a pro-Russian orientation (arrest of Odessa deputy Igor Markov in 2007) competition and to close all contacts with Russia
2. With the help of the Security Service of Ukraine, the Right Sector began to be strengthened as a possible force against Russia and its associated politicians. Football fans from all over Ukraine joined the ultra-right - even its East. In general, the typical “Zubatovschina”.
3. He helped the Svoboda party and Oleg Tyagnibok in their promotion, so that they took part of the electorate from “Batkivshchyna” and indirectly from its leader Yulia Tymoshenko, who was in custody. That is, “Freedom” was a spoiler party in Western Ukraine and was supposed to help split the forces that were in opposition to Yanukovych.

And he did all this so vigorously and well that he is currently sitting in exile in Rostov-on-Don, representing a political corpse. Dodgy, as he thought, the strategy of “feed the enemies, kill friends” turned out to be losing.

This is what the Ukrainian events are.

Will the authorities of Kazakhstan flirt with our nationalists after them, create a political organization and help them in some way? Well, I think if they want to move permanently to Moscow or Beijing and give press conferences from there, they will probably start flirting. But, in my opinion, our authorities are several orders higher than the class of Yanukovich and his mistakes will not be repeated. So, I think everything will be exactly the opposite.

And, of course, if national populists try to take advantage of socio-economic protests for their own promotion, it will end badly for them. I believe that in order to oppose our government, the party opposition and the ANSDP are enough; more is not needed yet.

“It is now clear that the Kremlin will demand total submission”

- Now, after the Ukrainian events, everyone in our country clearly understood that Russia is dangerous. They understood what our patriots were talking about all the time.
Russia's invasion of Ukraine showed Putin’s true intentions and made clear the goals of creating a Eurasian Union. This is an attempt to restore the USSR with the complete dominance of Russia.

The statements of Zhirinovsky and Limonov are in the same vein with these events. This is the threat of using force to join neighboring countries (or parts of them). It is no coincidence that on the eve of Nazarbayev’s visit to Moscow, where Putin called him on 5 in March, Russia conducted demonstrative exercises, launching a Topol rocket into Kazakhstan. The pressure on us will be very strong, and in the case of the introduction of sanctions against Russia, and especially the beginning of the war in Ukraine, the option of seizing our country is possible. As we remember, after the statements of Zhirinovsky, the Ministry of Foreign Affairs sent a request to Russia and received an extremely contemptuous and impudent answer: they say that you have some kind of “Anti-heptyls” organized, they demand to close the Russian polygons, and you are to blame. The arguments of the Russian side - both by landfills and by Baikonur - have always been simple: this is our land, and you, the Kazakhs, this does not concern.

In such a situation, public support is needed. First of all, from the representatives of the Kazakhs. We have a lot of Kazakh nationalists, that is, those who support the ideas of patriotism, love for their homeland, and are guided in their actions by its interests. But the problem is that there are no strong organizations. There are small groups of activists, but they are scattered.

Will the government go to rapprochement with the nationalists? Does she use them as a support in the emerging dangerous situation? The authorities have long lost the habit of consulting with society. Appeal to some independent social movements, especially not to consult with them in her style. The powers that be can use their potential only when the situation becomes extremely dangerous, when there is no place to go. But in order for them to go for it, it is necessary for Russia to threaten not only the country and the Kazakh people, but them personally, their position.

At the same time, our government is heterogeneous, there are many different groups and personalities in it. Someone may try, realizing the danger of the moment, to support the Kazakh nationalists. The latter are often accused of being tame, controlled by the authorities. But here everything is much more complicated. They have contacts with certain figures from the state apparatus, often simply friendly, kindred, someone sympathizes with them ... But to say that they are lured, it would be wrong. Their position during the recent devaluation does not say anything about anything - they did what they could, and did no more than what small, disparate groups of 5-10 people in each can do.

Today, the main goal of our nationalists is to unite and coordinate efforts. The worse the situation becomes, the stronger the pressure from Russia will be, the faster it will happen. The government fears that, openly supporting the Kazakh society, the Kazakh patriots, it can provoke some actions from Moscow, give it a reason. But it is not. Moscow will find the occasion in any case.