Ukrainian oligarchs do not want to pay for the revolution

March 10 2014
62
They wanted European values ​​- they got neo-Nazism. They were in favor of order - they got armed Makhnovshchina. They wanted honest power - they brought an illegitimate junta through their blood. At the end of all the dreams of Maidan, which was called "popular" and "anti-oligarchic," the self-proclaimed power seemed to mock the richest regions of Ukraine to oligarchs. Igor Kolomoisky nicknamed Benya cynically told the Maidan "thank you".


They try to explain to the thousands of fooled Maydanovts: the treasury is empty, good oligarchs promise to incur social spending in the provinces, and they love order. According to the law of capital, the money invested is simply obliged to return with a profit. Who will be robbed, of course.

In eastern Ukraine, there is always an equal sign between business and crime. The order, according to the concepts of the oligarchs, was provided by their own gangs of felons. And suddenly - respectable positions of governors. What to do with gangs? Brilliant way out: turn them into private armies, arm and give orders. 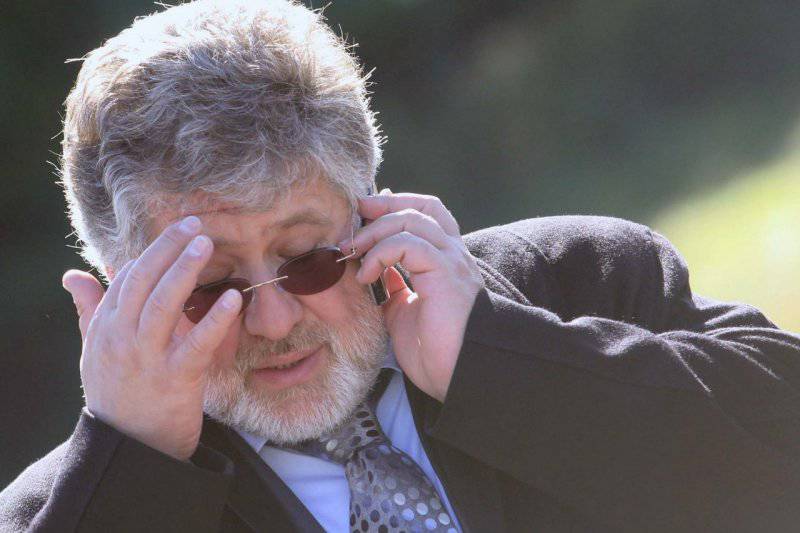 They waited so for Bandera, and Igor Valerievich Kolomoisky came - the ferroalloy king, telemagnate, banker. He will command the order.
“I came to have peace in the region and we slowly entered a peaceful life,” said the appointed governor of the Dnipropetrovsk region Igor Kolomoisky.

This is a new phenomenon for Ukraine - oligarch-governorship - not everyone was enthusiastically received. In Donetsk, Sergei Taruta, another billionaire and owner of the Industrial Union of Donbass corporation, even sprinkled holy water before taking office. Did not help. 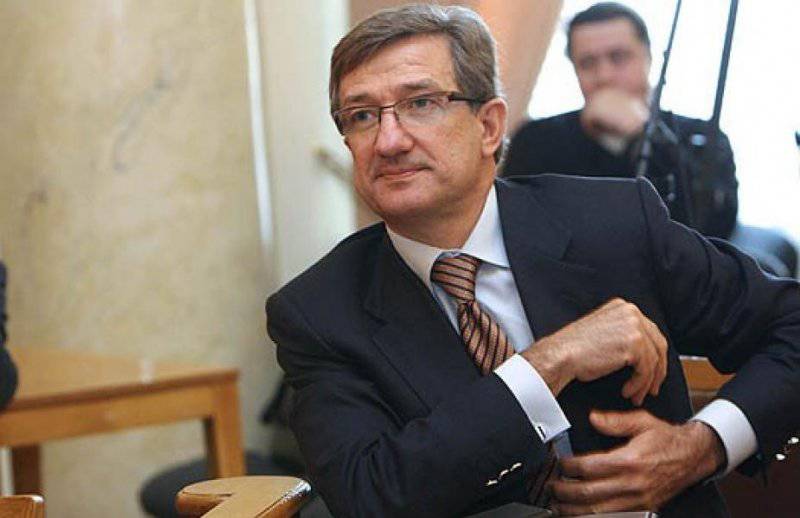 “There are people who create deliberate political provocations. They are also custom-made. People come and agitate for money,” said the appointed governor of the Donetsk region, Sergei Taruta.

In paid, according to the oligarch of Taruta, the rallies most of all should be annoyed by the slogan: “Down with the oligarchs!”, Therefore, the leaders of protest throughout Eastern Ukraine are taken away in an unknown direction by unknown people. Who - right from the rally, someone - from the apartment, as it was with the "people's governor" of Donetsk, Pavel Gubarev.

At first, it seemed that the security officials, sworn in by the Kiev junta, were doing this. According to a public activist from Dnepropetrovsk, Aleksey Anpilogov, the oligarchs, fearing the loss of control over property, have thrown their "personal armies" to pacify Russian-speaking regions.
“The entire Ukrainian economy was built on the forceful seizure of something. In these battles, private security companies, which each of the oligarchs had, were brought up,” said Alexey Anpilogov, president of the Foundation Foundation for Scientific Research.

Igor Kolomoisky, nicknamed for Beney's cheerful disposition, can equally easily slack off jokes and his opponents, many of whom paid dearly for not wanting to part with a business or a stake, because Kolomoisky is on a short leg with “GOD” - that’s what it was (Security. Guard . Warranty ") is called his chop. Already in 2010, the Kiev magazine "Power of Money" claimed that the "private troops" of oligarchs are comparable in size and equipment to the regular army.

"The training program of the Leon enterprise in Dnepropetrovsk included direct partisan activities, military training. This is not the protection of kindergartens," said Alexei Anpilogov.

“We are building a new country. And there should be peace and order in this country,” says Kolomoisky, meanwhile.

Boris Filatov, deputy businessman of Kolomoisky, even outlined the outlines of this new Ukrainian order on his social network page. "There are no extremist statements. It is necessary to give the scum any promises, guarantees and make any concessions, and then hang them," he writes. 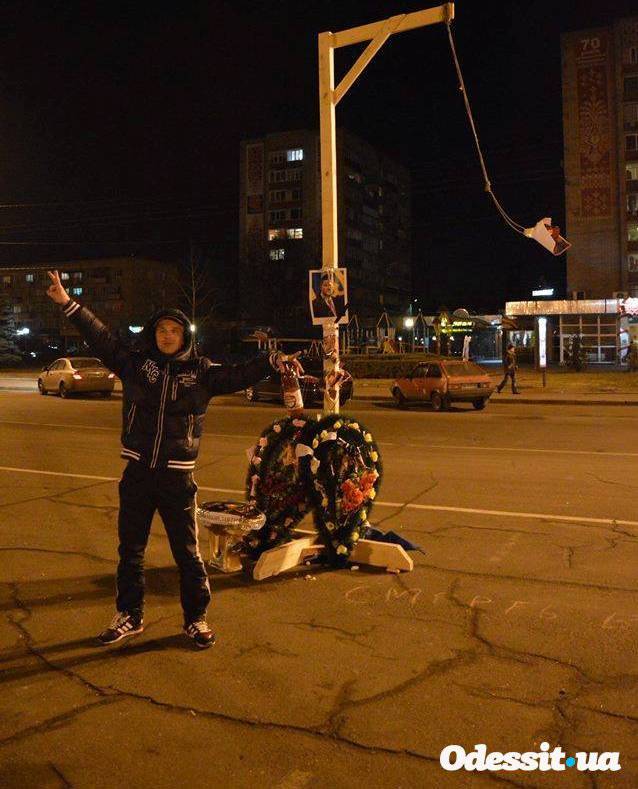 In the center of neighboring Cherkasy, a symbolic gallows have already been placed - exactly where it stood in 1942. But businessman Filatov claims that Russian propaganda distorted his words. All this, given the extreme religiosity of the Filatov’s chef, really looks a little strange, because the nationality, historical memory, and simply the presence of an Israeli passport should keep most Ukrainian oligarchs from collaborating with neo-Nazis. However, judging by the Filatov page on Facebook, its owner provided for this as well. It turns out that the most combat-ready hundred of the Maidan is the hundred Forbes.

"If we recall the 30s, the then oligarchs - the major industrialists of Germany - supported Hitler, the fascist insurrections, the investigation of the burned Reichstag, the massacre of the Communists - in the hope that they would later saddle the Nazi movement," Alexey Anpilogov emphasized.
“For them, the situation is much better when there is a parliament in which they form different kinds of political parties, feeding the same“ Freedom, ”and“ Strike, ”and“ Batkivschyna, ”and“ Party of Regions. ”Then they form the government, relying on the Verkhovna Rada. And this government will be more manipulated, "said economist Vladislav Zhukovsky.

The irony is that not the countrymen of Bandera paid for the revolution under the Bandera slogans - there are almost no large and profitable enterprises left in the west of Ukraine. The oriental, absolutely Russian-speaking oligarchs paid. The Maidan is the protection of their assets from Russian economic expansion, and as each of them hopes for a pass to the Western elite.

The IMF's set of improvement reforms is well known. It is called "shock therapy."

"Pensions in Ukraine will be halved - all so that the bankrupt Ukrainian authorities can pay off Western bankers. This is a complete repetition of the story with Greece. The country will be completely plundered. That was the purpose of the coup in Kiev," the director of the Department of Relations IMF Public Relations Gerry Rice.

Privatization - its revolutionaries are discussing with particular fervor. What to sell? Railway, gas transmission system, four nuclear power plants ... The most elaborate measures taken by the government’s Maidan are the 20-percentage fee for movie tickets. The most painful is the increase in gas tariffs. There is something suicidal in this, because it was cheap gas that made oligarchs' enterprises competitive. But who said that oligarchs are interested in the preservation of all enterprises?

"The population has almost no money. Currency inflow into the country has decreased, tax collection, according to official data, fell by 40-50%. The treasury, according to a new acting prime minister, is empty," said the expert, head of the Association of Customs Suppliers. Union "Oleg Noginsky.

Gold reserves fell to 12 billions of dollars, while before the end of the year loans need to pay 25 billions. Gas debts are approaching two billion. Hryvnia sold at the rate of 10, unofficially - 12. Introduced restrictions on withdrawals for the population. There is nothing to pay pensions and salaries to the military. Funds of the Deposit Insurance Fund have been allocated for these needs, but this is a trifle. What will happen next month?

"I think it is possible to predict a jump in prices for feed corn and the rush on the global food market, which will certainly play into the hands of American corporations," economist William Endgall said.

"Germany has traditionally been very skeptical about printing money to help EU countries. And Ukraine is not even a member of the European Union. Therefore, when Italy, Portugal, Spain do not receive money, all this does not look like financial, but strategic operation ", - said the publicist, columnist for The Washington Times Paul Craig.

Appearing on the eve of evidence of the involvement of the American billionaire, founder of the eBay portal Pierre Omidyar in financing the Kiev putsch, are unlikely to be able to interest anyone: one billionaire more, one less. Everything that seemed unbelievable yesterday, today is a harsh evidence. Nothing personal. Just business.

"These are people who have the main goal of life - to preserve the opportunity to plunder the budget and what remains in Ukraine, and also to legalize what they stole. It is for this reason that they rush into the European Union at any cost," said the economist , publicist Mikhail Khazin.

The transformation of Ukraine into the Wild Field is the terrible dream of the southeast. Wild Field does not need neither Dnepropetrovsk "Yuzhmash", nor Zaporozhye KB "Progress", nor the Kharkov Tractor Plant. His symbol is Mazepa, a resourceful hetman, possibly the first oligarch in this area.

Monument to Mazepa in the center of Kiev by Israeli sculptor Meisner. For some unknown reason, the sculptor decided to carve the hetman in the form of a rotating ball. However, there is probably nothing to argue with - and today Mazepa is spinning exactly the same way as in the 1708 year, when he decided to join the promising European project, the associated membership with which, however, ended immediately after the Battle of Poltava.

Ctrl Enter
Noticed oshЫbku Highlight text and press. Ctrl + Enter
We are
Way out of chaosWhat you didn't want to know about England
Military Reviewin Yandex News
Military Reviewin Google News
62 comments
Information
Dear reader, to leave comments on the publication, you must sign in.