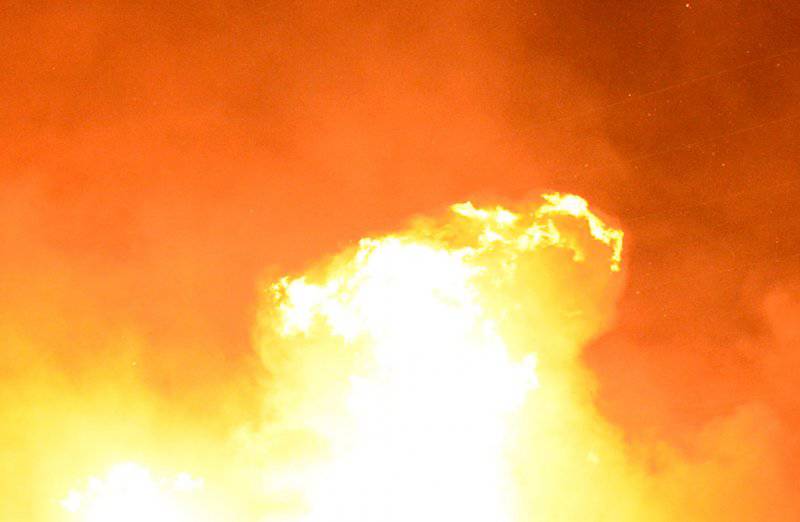 The development of the situation on the Russian-Ukrainian "front" almost completely supplanted news from other regions of the planet, including the Middle East, which has captured the attention of the world community in recent years. However, the Near and Middle East is still the "powder keg" of humanity. In Syria, the war continues to develop under its own power. Neighboring Iraq successfully leads to the collapse (or rather, its official registration) and the war of all against all.


Baghdad is well aware that the internal crisis in the country is caused not only by numerous internal problems, but also by an active external influence aimed at the collapse of Iraq. So, Iraqi Prime Minister Nouri al-Maliki said that the authorities of Saudi Arabia and Qatar actually wage war against Iraq. This was stated by the head of government in an interview with the French television channel France 24. “They (Saudi Arabia and Qatar) are attacking Iraq, through Syria and directly, and they have declared war on Iraq. These two states are primarily responsible for the interfaith and terrorist crisis and the security crisis in Iraq, ”said Nouri al-Maliki.

According to the Prime Minister of Iraq, Riyadh and Doha provide political, financial and informational support to gangs in Iraq and even supply them weapons. Religious fanatics instigated by Saudi Arabia and Qatar destabilize the situation in the Iraqi state. “I accuse them of inciting and encouraging terrorist movements. I accuse them of political and media support of terrorists, of their support with money and weapons, ”the Iraqi Prime Minister said. According to him, the authorities of Saudi Arabia and Qatar support terrorists not only in Iraq, but throughout the world. In fact, Riyadh and Doha are sponsors of world terrorism and the instigators of war.

Nuri al-Maliki stressed that Baghdad does not intend to go on a massive confrontation with Riyadh and Doha. However, he warned that the support of the militants would turn against the Arab monarchies. Actually, at present, Baghdad and can not do anything against the "oil monarchies." The country is falling apart into Kurdish, Shiite and Sunni parts; the processes of regional separatism are activated - the regions oppose the center, accusing it of unfair distribution of funds; a part of the territory has already been occupied by gangs; population dissatisfied with the mass of socio-economic problems. The armed forces and law enforcement agencies can not cope with a wave of violence, the army has not regained its combat effectiveness after the American occupation. The authorities cannot ensure security even in the capital, which is shaken by a series of large-scale terrorist acts with frightening regularity. Corruption is a terrible scourge of the entire administrative apparatus, which does not enjoy the confidence of the population. New Saddam Hussein, who could bring order to this chaos, is not observed.

The situation is complicated by the confrontation between the Sunnis and Shiites (Shiites among the Muslim population of Iraq are about 65%, Sunnis - 35%). Currently, Sunnis consider themselves to be oppressed by a minority. I must say that after the occupation of Iraq by the Americans, when the power passed to the Shiites, Baghdad really broke a lot of firewood, actively oppressing the Sunnis. There are entire rebel armies in the country. The most powerful are: Iraq’s Islamic Army (supporters of the Ba'ath Party are considered the ideological heirs of the deceased President Saddam Hussein); Islamic Front for Iraqi Resistance (Sunni militants); Army Ansar al Sunna ("Army of Sunna Followers", Sunni Islamists); grouping "Islamic State of Iraq and the Levant"; Council of Mujahideen Shuras (Al-Qaeda unit).

Fighting continues in the major cities of Anbar province - Fallujah and Ramadi. The Islamists captured them at the end of 2013. Since then, the power of Baghdad to Anbar almost does not extend. Baghdad has already tried several times to knock out militants, but nothing happened. The situation is exacerbated by the presence of a third force - Sunni self-defense units.

The situation in Iraq is well characterized by news from the country: almost the entire news feed is devoted to murders, terrorist attacks, attacks on government and military facilities, officials, military and police. The country has plunged into inferno. Only in late February and early January 2014, several large-scale terrorist attacks took place in Iraq. For example, on February 12, the city of Musayyib, about 20 kilometers south of Baghdad, was subjected to mortar shelling. Killed 40 man and more than 22 injured. An investigation revealed that shelling was conducted from the neighboring town of Jurf al-Sakr, which is populated mainly by Sunnis.

February 22 militants conducted a series of terrorist attacks. In the city of Sania, terrorists attacked a checkpoint, four policemen were killed, six were injured. In the city of Tikrit, terrorists laid explosive devices in two buildings where law enforcement officials resided. The explosion killed three people, 17 were injured. In the eastern province of Diyala, a gangster group attacked a law enforcement base. Six policemen died, another six were injured. Killed and several militants. On the same day, several more terrorist attacks and shootings occurred.

23 February came the news of the militant attack on a military base near the village of Ain Jahash. Ten soldiers were killed, five people were injured. On the same day, the militants shot down a helicopter that made a reconnaissance flight over the city of Karma. Four soldiers aboard the car were killed. February 24 thugs attacked police who guarded pipelines in northern Iraq. 26 cops died, 10 were injured. At night, the militants attacked the district headquarters of the Ministry of Internal Affairs in the area of ​​the village of Suleiman Beck. Three policemen were killed, 12 injured.

Attacks on police, military and administrative objects occur according to the same scenario. Terrorists inflict a fire strike, usually at night, from mortars, grenade launchers, fire at buildings with small arms. Often the gate rammed cars mined. Then the militants go to the assault.

It should be noted that most often militants have greater combat effectiveness than representatives of power structures. They are ideologically motivated, ready to sacrifice themselves - often car explosions, explosions at the gates of buildings, military and administrative sites are committed by suicide bombers. Militants are well armed, mobile. Have a good financial support. The scourge of the army and security forces is massive desertion. Soldiers do not want to die for the government, which has already distinguished itself by a series of corruption scandals.

February 24 militants organized another series of attacks. As a result of mortar shelling in the center of the city of Ramadi, one policeman died, several were injured. In the city of Al-Habbania, which is located in the province of Anbar, a suicide bomber organized a terrorist attack at a checkpoint of Iraqi security officials. Several people were killed and injured. In Fallujah, fighting continued between militants and the army, police forces, Al-Sahwa militias. In the city of Mosul, the governor of this region, Asil al-Nujaifi, was attacked. Two of his guards were injured.

25 February an explosion occurred outside the city hall of Ramadi, 3 people died, another 15 injured. 27 February came the news of a new series of terrorist attacks. In the Iraqi capital, terrorists organized a series of explosions. More than 30 people died, more than 50 injured.

4 March militants seized the city council building in the Iraqi city of Samarra. One militant blew the door, others broke into the building, capturing a few dozen people. The Iraqi military went on the assault. The surviving militants refused to lay down their arms and blew themselves up. Several people died, injured about 50 people. On the same day, the Islamists killed 20 captured soldiers. Militants seized a roadblock in the south of the city of Fallujah, taking its garrison hostage. After some time, the soldiers were shot.

9 March came the news of the terrible terrorist attack in the city of El Hill. A suicide bomber blew up a minibus at a cluster of cars at a checkpoint at the entrance to the city. The explosion was such a force that caught fire around 50 machines, and the checkpoint building was partially destroyed. At least 45 people died and 147 were injured. Among the dead are several policemen.

What does this mean

First, the chances of restoring stability in Iraq are less and less. The country is plunging deeper into the chaos of civil confrontation. The rifts are held on religious and national grounds, which sharply stiffens conflicts. There is no leader who could restore unity with “iron and blood”. Iraq could be saved by international intervention. However, almost all global (US) and regional forces (Arab monarchies and Israel) are interested in the death of Iraq. Russia and China do not have effective tools to help Iraq, they are too far from the region, and there are enough other problems. Therefore, Iraq can only sympathize.

In principle, Iran can actively intervene in the situation. Tehran and so supports the official Baghdad. However, the participation of Iranian special forces and troops in the fight against gangs in Iraq, following the example of Syria, will provoke a sharp reaction from the United States, Israel and the Arab monarchies. They have already responded sharply to the news of arms supplies to Iraq from Iran.

Secondly, we see how rapidly a new front of world war is being formed. This is a Sunni-Shiite confrontation. Riyadh and Tehran claim leadership in the Muslim world. Iraq has become one of the fronts of this confrontation. Another front is Syria. Sooner or later this conflict will reach a new, higher level.

Ctrl Enter
Noticed oshЫbku Highlight text and press. Ctrl + Enter
We are
Iran in the Syrian conflict. The confrontation with Saudi Arabia and the interests of the ShiitesUS Mission in Iraq ends with the creation of a Caliphate
Military Reviewin Yandex News
Military Reviewin Google News
18 comments
Information
Dear reader, to leave comments on the publication, you must sign in.