To hire mercenaries in Ukraine? ..

March 11 2014
41
Protection of the new self-proclaimed government of Ukraine, it seems, cannot do without financial and even military support from the West. Increasingly, there is information that foreign mercenaries arrive in Kiev, representing private security companies (private military companies). Information agencies are already talking about hundreds of foreign mercenaries who come in separate groups to Kiev airport. Why come? Well, certainly not to admire the sights of Kiev ...


Today, there are several hundred private military companies in the world whose hands, for obvious reasons, are not bound by any conventions or other international obligations. In fact, these are groups that today may act on one side of the conflict for one or another sum, and tomorrow, if someone pays more, they will take a completely different side without a twinge of conscience. So far the United States itself pays more, and therefore the direction of activity of these firms is understandable.

One of the most active PMCs recently are the American organizations Blackwater (aka Xe Services LLC since 2010), Armor Group, several British mercenary structures. De jure, these structures are not subordinate to the authorities, have no relation to the state interests of a particular state. But de facto, it's not at all like that. There were quite a few episodes when the same Blackwater PMC operated with the actual support of the White House and the US State Department. As the saying goes, “whoever pays a girl is the one who dances her.” And this girl, who is so fond of gray-green bills, now seems to want to prove herself on the territory of Ukraine (at least ... 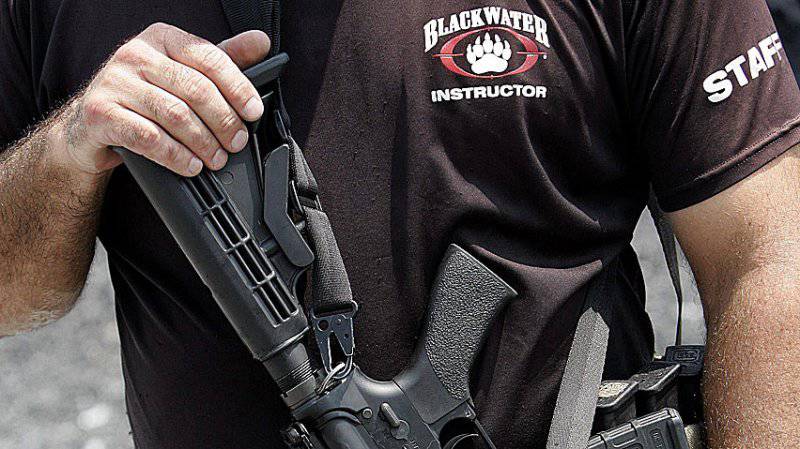 As it turns out, not only wants, but already manifests itself. "On the eve of the", referring to the expert opinion of a high-ranking employee of the Kiev division of "Alpha" reports that the American mercenaries have already performed several operations on the territory of Ukraine. One of such operations is the detention of the people's governor of the Donetsk region Pavel Gubarev. An employee of the Alpha unit himself stated that the special services of Ukraine had nothing to do with the detention of Gubarev. The same source reports that, with a high probability, the operation against Pavel Gubarev was carried out by the officers of the Blackwater security complex.

After the arrest, Gubarev ended up in Kiev, where the case against him was about almost all mortal sins: from calls for separatism to the deployment of anti-state propaganda and cooperation with foreign intelligence services. The last point especially "touches" in connection with those who helped to detain Pavel Gubarev with the new Ukrainian "authorities" ...

Meanwhile, the Kiev Shevchenko Court issued a decision on keeping Gubarev in custody for a term of 2 month. After some time, Pavel Gubarev decided to release on bail in the amount of about 97,5 thousand hryvnia. According to some reports, Gubarev may get out of custody on Tuesday 11 March 2014, although this information is not yet confirmed.
So, on the territory of Ukraine, a considerable number of mercenaries are now operating with funds from the United States of America that solve tasks consistent with the interests of the United States of America itself. Let's not forget that the mercenary groups include professionals, most of whom are former employees of Western power structures, military units performing operations in various parts of the planet.

In order to more precisely understand what functions modern western PMCs assume upon themselves, you can look at the site of one of them, Xe Services LLC, which is also Academi. Recall that this is the Blackwater company that replaced the sign in connection with a series of international scandals over the atrocities in Iraq and Afghanistan.

On the Online This company has several newsletters telling what kind of “whims for your money” are ready to be performed by its employees. We enter the section "Commercial Services".

Threats today appear in countless ways. When an event occurs that causes harm, chaos, and destruction, the costs for recovery can be unpredictable. Important infrastructure facilities and commercial activities are increasingly becoming targets of opponents. Academi provides risk assessment services to institutions based on the preparation of armed guards for commercial clients around the world.

Translating all this from a commercial-advertising language is not universal, it turns out that the company seems to make it clear that today it can reliably protect infrastructure and commercial facilities. It would seem, nothing strange - the usual chop in American. But only this “PSC” has at its disposal not only rubber truncheons and walkie-talkies, like the average private security guards in Russia or Ukraine, but whole arsenals. This is a small weapon, light armored vehicles, military aviation (including UAVs), systems for the destruction of the manpower of a potential enemy, armor. The company used all these funds (then still under the guise of “Blackwater”) in full on the territory of Iraq, Afghanistan, Pakistan, Libya and other countries. Practically not a single military conflict of recent times was complete without the use of mercenaries, among whom the “academics” from Blackwater were especially active. It is interesting that when Academi reflects on the need to defend itself against chaos and destruction, it does not mention that it is chaos and this destruction can be organized by one or two ... The Ukrainian scenario is one example of how PMC employees “helped” Maidan to build a "democracy."

Let us return to the company's online resource, which currently employs at least 20 thousands of people. There is also a section “State services” in which the following is reported:

80000 missions in the most hostile regions on Earth. There is no firm in the world that can better solve Academi issues related to government support when it is busy with security problems.

That is, the hint is transparent. If a government needs to protect its interests, then “our guys” can help it if they gild the handle. It is clear that the new “authorities” of Ukraine have nothing to gild the handle with foreign PMCs, but American friends are of great help in this. Recently, such “help” has been actively involved in the so-called NGOs, which were fairly divorced on the territory of Ukraine. The activities of these NGOs are governed by the old proven US methods - through their own diplomatic missions. If in Russia, political NPOs feeding on Western funds were good at cutting off the wings with the well-known law “On Foreign Agents”, in Ukraine, Mr. Yanukovych could not afford to offend Enkaoshniki fed by the States. I could not ... The result of such weakness we see today.

The use of “independent” mercenaries in Ukraine is extremely beneficial to the States. Indeed, at any time you can say that official Washington has nothing to do with the actions of these individuals. And yet he will be believed ...

By the way, is it possible to send a request to the address of the former “Blackwater” on the topic of how much it would cost their employees to leave Ukraine for their faithful back to the States ... According to some information, for their services when used in one or another part of the world more than 100 employees, this company takes something around 200-220 thousands of dollars a day. Well, since the organization is sold for "real" money, then it is a sin not to use it ...

Ctrl Enter
Noticed oshЫbku Highlight text and press. Ctrl + Enter
We are
Private military companies: legalize or continue to pretend that they are not?Soldiers for rent
Military Reviewin Yandex News
Military Reviewin Google News
41 comment
Information
Dear reader, to leave comments on the publication, you must sign in.