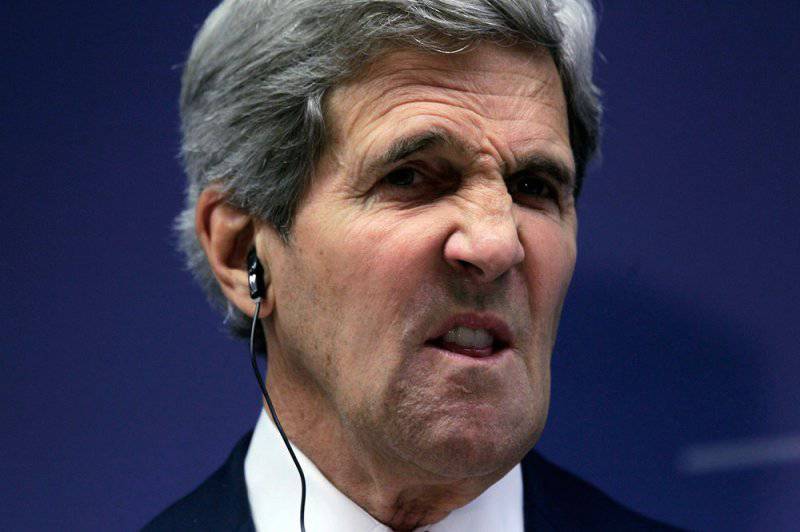 John Kerry warned Sergey Lavrov that "the annexation of the Crimea will close the door for diplomacy." This, we must understand, is about two actions that are prohibited by Russia - to recognize the results of the referendum in the Crimea and to accept it in its membership in the event of a positive response to the referendum question, as well as providing military assistance to the Crimea in the event of Nazi aggression from the mainland.

Both that, and another will become the next "red line" for America. True, now Obama has drawn conclusions from last year’s August crisis and trusts to pronounce such unequivocal warnings to someone else. Behind him, he leaves the possibility to soften, if necessary, any harsh statements and threats and, if necessary, go backwards.

Therefore, it is necessary to understand that Kerry does not state Obama’s official position, but plays the role of an “evil cop,” taking fright. In the event that the “partner” does not make concessions, Obama may appear on the scene and slightly soften the situation.

Nevertheless, the Obama administration will not be able to swallow any actions of Russia in the Crimea, and especially in Ukraine. Obama is openly accused of softness by Republicans, and the Democratic hawks of their own speak extremely unfriendly. Obama is remembered by everyone - both Syria and Egypt, even Libya, long forgotten. He will not be able to react now - the only question is how.

Most likely, if Russia ignores the warnings - and it seems to ignore them - in the course of the first stage will go sanctions. Against specific individuals, their assets, against pinpoint Russian enterprises. A tougher option is to close the American market for entire groups of goods and industries. Naturally, such US sanctions alone will not want to, and will demand that they be supported in Europe and under the control of the countries of Southeast Asia.

In the case of an attempted military solution to the Crimean problem by Kiev, the риrushuchy offensive will inevitably be beaten off, and then the time will come for military assistance - financing the hiring of fighters in Eastern Europe, supplying weapons, switching intelligence capabilities to the needs of the Ukrainian "defense." Again, the United States is unlikely to want to pull such events alone, so Europeans will be drawn to them. By all appearances, Eastern Europeans will help people - it’s no use for the Jubermensch to lay their heads in the Ukrainian steppes, for that there are all kinds of Romanians and Bulgarians, Poles and other Bosniaks. It is quite possible that an advance payment for such assistance was recently exported from Boryspil - the United States traditionally tries to shift the cost of democratization to the democratized themselves. What looks like a quite traditional Euro-Atlantic death-fighting - the German Reich carefully sent the relatives of the executed bills to pay the costs of executing the sentence.

Surely the United States will try to use the Islamist map in the Crimea - so they will try to bring up militants from the Middle East. True, it is unlikely that they will be Arabs - but there are more than enough Turkic-speaking Islamists in the same Syria.

In general, it is very likely that the situation will be attempted to lead along the Syrian route immediately without any special buildup, with the exception that there are no permeable land borders in Crimea, and it is still easier to block the sea than deserted and desert Syrian open spaces.

On the territory of Ukraine itself, in the event of a military solution to the Crimean question, the Nazis will immediately try to introduce a normal dictatorship under the guise of the need to rally the nation without special ceremonies. Therefore, the current Kharkiv or Donetsk freemen, if it does not have time to solve the problem of seizing power before the Crimean events, will most likely be terminated. Any events in the Crimea will reliably distract attention from everyone else - and activists of pro-Russian organizations in the eastern regions can simply be arrested, and even eliminated - they are still untied from the Right Sector, then they will even be obliged to "restore order" at any cost.

Most likely, the situation will develop in descending order. A peaceful solution is hardly foreseen at the moment - it can only be if we turn away and close our eyes to the massacre that the Nazis inevitably perpetrate in the Crimea and eastern Ukraine. But the close will not work - even if someone really wants it.

PS I will quote one letter that came. It is clear that it is difficult now to assess the reliability of something due to kaleidoscopic changes in the situation, but nevertheless:

"... 1. Acting Minister of Defense Admiral Tenyukh, though a native of the Lviv region, is not able to engage in the development and conduct of a large-scale operation of the ground forces, Turchinov, Parubiy and Yatsenyuk decided to entrust its holding with three deputies to the Minister of Defense All three were generals Oleinik, Mozharovsky and Babenko refused the offer and were dismissed from their posts, the personnel gap had to be closed by a retired colonel Peter Mehed, whose last post was called “deputy director Ora International Cooperation Department of the Ministry of Defense. "

2. Who exactly of the Ukrainian generals agreed to undertake the implementation of the plan, which essentially resembles the Georgian attack on South Ossetia, is not yet known for certain. However, taking into account the mounting of the active protection blocks on Tanks 1st division tank brigade (Goncharovskoe, Chernihiv region), leaving the 26th artillery brigade (Berdichev, Zhytomyr region), and the 27th regiment of rocket artillery (Sumy), we can assume that the core of the strike group will be to be the 8th army corps under the command of Lieutenant General Litvin Pyotr Mikhailovich.

3. For the blockade of the Crimean isthmuses, the 79 th separate airmobile brigade is deployed. The 8 Army Corps (Zhytomyr), which includes two mechanized and tank brigades, is moving southward. Part of the 25-th separate airborne brigade (Dnepropetrovsk) and other units from the 6-th army corps (Dnepropetrovsk) may be involved. The grouping (depending on the outcome of the “work” with the command of the formations and units) can be created more than serious - up to two tank and four mechanized brigades with artillery support units, as well as an airborne, airmobile brigade and a special-purpose regiment.

4. From a military point of view, what is happening is nothing more than preparation for an army offensive operation with the immediate task of capturing the isthmuses and access to the operational space and with the ultimate task of unblocking the points of permanent deployment of the Ukrainian Armed Forces and military facilities. From a political point of view, mastering Dzhankoy and Simferopol guarantees the impossibility of holding the Crimean referendum.

5. As it became known, “self-defense activists of Maidan” (mainly from the “Right Sector”) were assigned to the commanders of the formations and units with the task of active psychological treatment of the personnel and control over the actions of the commanders with the right to remove them from command.

To comment on the reasons for Kiev’s decision to go for nothing in the hope of unleashing a military conflict with the Russian Federation with the explicit goal of drawing NATO into it as a result, I don’t want and willn’t: let the politicians think and reason about it ... "

Ctrl Enter
Noticed oshЫbku Highlight text and press. Ctrl + Enter
We are
A great interview with Sergey Lavrov: about Ukraine, Obama and IranWhat you didn't want to know about England
Military Reviewin Yandex News
Military Reviewin Google News
95 comments
Information
Dear reader, to leave comments on the publication, you must sign in.