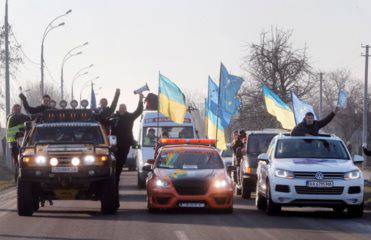 I continue to publish letters from the series "Eustace Alex":

Very indicative was the fact that immediately after avtomaydanovtsy seized upon the cars of the younger son Yanukovich (and he is a big fan of cars), they requisitioned them in their favor and began dissecting them in Kiev. Moreover, when one maydanovets, not understanding the current moment, broke the headlamp on a car belonging to the bloody regime, they quickly explained to him with the help of clubs how wrong he was.

Also noteworthy was the seizure of people in balaclava, much like PS fighters, the day after Yanyka escaped the archives of the Ministry of Justice. If I am not mistaken, you, Anatoly, have written about this case.

The remarkable thing about this moment is that it was not just the archives of the Ministry of Justice, but the archives of the registration service of the Ministry of Justice. Under the current law, it is the registration service that registers transactions for the alienation of real estate and land plots and issues the relevant confirmation of ownership of real estate. So this is a very, very tasty morsel. You can, for example, remove some papers and try to prove that a piece of land or a building in the center of Kiev belongs to you. So he imagined a picture of how, in the courtroom, he was wringing pieces of paper, proving his ownership, and citizens with masks with clubs and “Molotov cocktails” listened very attentively. After all, according to the Code of Civil Procedure, the court sessions are open and every citizen has the right to attend them.

By the way, about the buildings. For example, almost all shops were closed on Khreshchatyk, and the stores there were the most “prestigious”. When I was there for the last time, I saw only one open one - selling sportswear. The buildings on Khreshchatyk are all divided between the SS and the Maidan self-defense. For example, the entire Passage is already in the actual ownership of the PS. I wonder how real owners are going to drive out the militants? (If someone does not understand, the question is rhetorical.)

In addition, the militants and the PS and Self-Defense began to spread throughout the city, seizing while office buildings belonging to the Yanyka family and his team, as well as the offices of the Party of Regions and the Communist Party. Moreover, the militants are located in the former offices in a businesslike manner, for a long time, and Kievvodokanal and Kyivenergo were severely warned about the impossibility of disconnecting such facilities from electricity and sewage. And, to pay for all the amenities, of course, they are not going to. So, to pay such happiness will have all the same stupid Kievans.

According to rumors, which are confirmed by reality, all of Kiev is already divided into zones of influence and "responsibility" of the PS and self-defense. In addition, the PS protection and self-defense, as well as the union of Afghans, have been introduced in all ministries and departments. The latter, by the way, are the least noticeable, but act in coordination with the PS.

Naturally, no one keeps statistics of seized property, information is known only to the leaders of the militants, but reports of seizures come from all districts of Kiev.

If the PS militants are more or less disciplined, then the militants of various hundreds of self-defense begin to make up an increasing problem, which actually came out of the subordination of the Maidan self-defense leadership.

It is necessary to say that everyone who wanted was taken into self-defense, they came in whole organized by already armed criminal groups, received a “mandate” of self-defenders and seemed to be subordinate to the leadership. It is characteristic that the exact number of such self-defenders is unknown even to Parubiy, who was formally considered to be the head of self-defense of the Maidan, there is no clear hierarchy and discipline.

So, here such anarchic “hundreds” also seize the offices they like and “nest” there, in addition, they clean the attracted ones. How the police are struggling with this state of affairs shows a characteristic incident that occurred on Shota Rustaveli Street. This is a street in the center of the city, there are offices of large firms, expensive shops, apartments of rich people. So, at night a team of self-defenders arrived, quietly opened the law office and slowly began to clean it. Some do-gooder did get through to the Pechersk regional department and, about an hour later, a police squad arrived at the scene. Self-defenders slapped the cops on the head and sent them back and calmly finished their work. Although later, in the media, the cops lied that they took the offenders to the regional department, where they were identified and then released (!!!).

As they say on these your internet, wangooi, that they will soon begin to clean the rich apartments, and even take them away from the servants of the former bloody regime. By the way, the self-defenders who occupied the Kiev mayor's office have already put forward an ultimatum to the newly appointed head of the Kiev state administration in Kiev to free the building in exchange for apartments in Kiev at the rate of one office per apartment.

The “anarchists” also tried to drive into the Boryspil international airport. The leadership of the airport had to appeal to Afghans for protection. Afghans repulsed the anarchists, but the leadership still had to pay, but already to the Afghans.

Slow redistribution began in the Kiev region. Freedom is the fastest to press down the Kiev region. For a start, svobodovskie self-defenders came and changed the local government in the district centers. They simply changed - they gathered local deputies and said who they want to be mayor. Those who tried to resist were simply sent to hospital. After that, the local deputies, the regionals and the communists, were given an ultimatum: either you quit the party and vote, as we say, or go to the hospital at best.

Then, the new government is already gathering local businessmen and bringing the distribution list to whom and how much to pay for “self-defense”. For some reason everyone agrees.

The PS got into this topic later, but also decided not to lag behind and bend under this scheme this week the first regional center - Vasilkov.

As for the businessmen themselves, who began to bend, their attitude towards the revolutionary redistribution is understandable. The smartest by the new year, all sold and piled out of the country. More slow-witted began to throw off everything cheaply in January-early February, and there were idiots who bought the business. The most stubborn ones saw their sight only now and howl like a wolf.

It should be noted that there are light-eyed elves, whom dekulakization has not yet touched and who still believe that everything will be fine, mostly for some reason IT-shniki.

A large business that can protect itself by an armed guard service is more comfortable with what is happening simply because they understand that they will not escape from a submarine.

By the way, the statistics on crimes committed in Kiev is now better protected than any state secret. I tried to ask the big people to look - they say, we cannot see for ourselves, they don’t give.

In general, I think Europe will be glad to accept a country with such an attitude towards property into its friendly family ...

Ctrl Enter
Noticed oshЫbku Highlight text and press. Ctrl + Enter
We are
About Stalin and KhrushchevWhat you didn't want to know about England
Military Reviewin Yandex News
Military Reviewin Google News
61 comment
Information
Dear reader, to leave comments on the publication, you must sign in.