Double standards of Kiev: that on the Maidan - heroism, in Donetsk - separatism 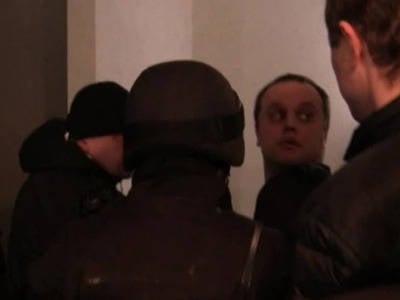 In the Lviv region today, militants of the Right Sector movement disrupted the presentation of a new regional prosecutor. They entered the building of the regional prosecutor's office and forced the official to leave. Nationalists called the incident lustration and explained that the prosecutor should not intercede for work, because they, militants, have doubts about his honesty. But for some reason, the residents of the Donetsk region are denied new Kiev authorities the right to their own opinion about the appointees sent. The tension there reached a peak when the special forces detained and brought the people's governor Pavel Gubarev to Kiev. They want to judge him for the same, for which the protesters of the Maidan were declared freedom fighters. The story of the troubled Donetsk.


Spetsnaz security service of Ukraine "Alpha" in a hurry. Pavel Gubarev handcuffed. He does not have time to get acquainted with the court order, unsuccessfully demands to wait for his lawyer. The arrest is watched live by the wife of the people's governor. They talked on Skype. Catherine is sure: this is not the end of the struggle.

"I will stand in my husband's place and fight," she says.

Gubarev is being taken to an unknown destination in a car with Kiev numbers. Detained for testimony and his close associates. In the evening news about the arrest of the leader of the Donbas people's militia collects several hundred citizens from the local administration of the SBU.

Representatives of the department to the people do not go. Inside are only official defenders of the people's governor. “Now we are waiting, we ask that the ombudsman be launched from us there, to make sure that he was not beaten, tortured, not subjected to repression, so that everything is legal!”, Say the lawyers.

The leader of the national militia is immediately accused of three articles: separatism, the seizure of buildings and, finally, an attempt to overthrow the government. The policy of double standards in action. For the same deeds in Kiev give heroic ranks to activists of the Maidan. In Donetsk, those who disagree with the regime are imprisoned. Without the right to meet with a lawyer.

“They didn’t allow us to see Pavel. We don’t know where he is,” Gubareva’s lawyer, Elena Pryadko, wonders.

Against the peaceful picket of supporters of Gubarev, the authorities abandoned the police special forces. The branch of Donetsk "Berkut" receives an order to act tough and disperse the crowd. Immediately at the building of the SBU appear auto-bunkers with the police. Taking in the ring, activists, one by one and groups driven into special buses.

After half an hour the situation is changing. Special forces soldiers do not want to go against the people. Detainees released from avtozak. Later it turned out - the police refused to beat their fellow countrymen. At their base, they laid down weapon, stating that they will no longer be an instrument of political terror of the Kiev authorities.
“The government, which I do not consider to be legitimate now, it has come to power on the corpses. We do not want to take any part in political wars, we are called to protect public order, and we will stop there, we will not listen to anyone, we will adhere to the law , - the fighter of "Golden eagle" Vitaly claims.

“Oh! It hurts and it hurts that the current government gives such criminal orders. I know that they refused to carry out the criminal order, and the people are with them!”, Says the former commander of the special unit Berkut in Donetsk Vladislav Domrambekov.

Today, information was confirmed that the leader of the national militia Pavel Gubarev was taken to Kiev. This was done specifically to bring down the heat in the center of Donbass. Gubarev said that the struggle continues. And after that he was taken away in an unknown direction.

Political repressions of the new Kiev administration in Donetsk are only heating up the situation. The assurances of the governor-oligarch Taruta that he controls the situation in the region are not confirmed by anything.

As well as the main thing - who will "silence" the voices of the disgruntled residents of Donbass, the proteges of the Maidan are not clear. One cannot count on the absolute subordination of local security forces to the power of oligarchs in this region. Meanwhile, tomorrow, on Lenin Square, in the center of Donetsk, there will be a rally of thousands of opponents of the new government. Fighters of the "Berkut", they said - they are not going to disperse the peaceful demonstrators.