Ukrainian political scientists know how to avenge the Crimea 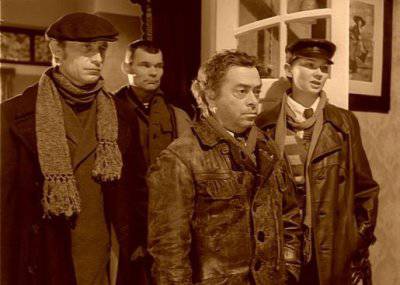 Ukrainian political scientists and political technologists, whose merits in the events are difficult to overestimate, delight us with their sparkling understanding of the situation and brilliant economic knowledge.


"What Ukraine needs to do in the very near future. The Yatsenyuk government should file an official lawsuit against international courts against the Russian Federation, demanding compensation for the multi-billion dollar damage inflicted on Ukraine’s economy."

This includes the destroyed military property of the Ministry of Defense, the seizure of property of state institutions and commercial enterprises (Ukrtelecom, Ukraerorukh, airports, the Kerch ferry, etc.), as well as the total losses incurred by Ukraine from the intervention (mobilization measures).

The amount of such a claim may exceed $ 30 billion. Further, according to the legal procedure, in the case of a very predictable gain of the Ukrainian government, most countries of the world will be obliged to delay and arrest the following claim:

If the Russian side fails to comply with the claim, any property can be sold at auction, or alienated in favor of the government of Ukraine.

Let's crush the hydra economically, "- This text was written by political consultant Taras Berezovets, a former Crimean citizen, on his Facebook page. They, apparently, were driven by a desire to overcome our economic problems in the way of the name of gold Polubotka.

I would suggest to include in the lawsuit the losses of Ukraine from the actions of its leaders and the idle chatter of the Ukrainian political consultants, who, 22, have been leading the country like a blind to the edge of the abyss. And present all of Russia.

And to appoint Berezovets as Prosecutor General with a separate cabinet and a mulatto secretary.

Imagine in general the practical implications of using these recipes, which sound passionate, tempting, but completely unrealistic?

"Ukraine’s accession to NATO can be used as an argument in negotiations with Russia on the Crimea ... According to opinion polls, about 40% of the population of Crimea are in favor of joining Russia. This is quite a lot, but not the majority. We understand that the future of Crimea is not can be decided without the Crimean Tatars, and they are unequivocally opposed to joining Russia. Therefore, no civilized country, except perhaps the republics of Nicaragua and Nauru that have recognized the independence of South Ossetia, will support the annexation of Crimea to Russia. "

Moreover, according to Elizaveta Danilovskaya, editor of the live broadcast of the TV channel 112 Ukraine, Pan Garanj, as a result of a live survey of this channel, it turned out that 80% of Crimeans do not want to go to Russia. So if a referendum is held on the 5-th channel with the support of TVi, I think that 99 percent will vote against joining Russia.

No matter how sad it may be to us, it may turn out that Crimeans do not agree with Garan.

So is it not logical to find out the real numbers? By the way, it is already clear to everyone - the “civilized countries”, which recently recognized Kosovo, Eritrea and South Sudan and did not recognize Transdniestria, Abkhazia and South Ossetia, are guided by a well-known logic, which reads: "lie, rot your line and do not listen to anyone."

In the modern world, there was already a scandal with Snowden, a nurse, Naira, with three hundred babies killed by Iraqis in Kuwait, an unknown powder in the hands of the American secretary of state. It was used as a pretext for invading Asian countries. And the unknown, not found by anyone weapon mass destruction of Saddam Hussein, became a pretext for the total destruction of Iraq. So Pan Garan is a little behind the events.

What does our permanent hero, the greatest known economist of the universe, Oleg Soskin, think about Crimea?

"If the Russian Federation decided to take the Crimea for itself, then it will have to carry out a genocidal sweep there, send from the Crimea all those national and social groups that will interfere with the establishment of the Russian dictatorial regime on the peninsula. These people can be sent from the Crimea to Russian, sparsely populated territories, which, strictly speaking, it has already identified - Anadyr, Kolyma, etc. ... It is clear that the Russian Federation is seizing the Crimea in order to destroy a rival Sochi, so they destroyed And haziyu undermined Georgia as Sochi competitors. That is, Moscow is interested in the fact that now there is degradation, the decline of the Crimean peninsula, and will carry out a genocide against the people living on the Crimean Peninsula "- Pan Soskin writes.

Based on the logic of Mr. Soskin, the next goal of Putin is Monte Carlo and Hawaii with the genocide of the local population. Russia will do anything, if only everyone is resting only in Sochi, here and do not go to the grandmother.

Capture to destroy - what should be in my head to write this?

Such as gentlemen Berezovets, Guarani and Soskin, it would be nice to determine the dwelling near Anadyr. In fact, the Russian president has already planned this.

In general, the latest publications of our political consultants about the Crimea remind the plot of a famous fable about a fox and grapes. Realizing that they are losing the country solely because of their stupidity and hatred, however, they continue to carry their nonsense, telling that the Crimea will disappear, die and collapse; each time dripping and dripping meaningless stupid passages on the brains of their fans, with delight listening to them.

Gritsenko said that the citizens of Russia should be banned from leaving the country This is the Looking Glass, gentlemen, and these guys in the real world, apparently already tourists.

От редакции: The saddest thing is that in no statement of political scientists does not sound analysis of those blunders that the government - any, consistently - made in relation to the inhabitants of Crimea. Moreover, mistakes are not recognized, the lessons are not drawn. No good world is offered to Crimeans. We, the citizens of Ukraine, really want this paradise on the planet to stay with us. But threats, contempt and warlike plans do not achieve this ...

Ctrl Enter
Noticed oshЫbku Highlight text and press. Ctrl + Enter
We are
List of destroyed the largest and most high-tech enterprisesMilitary reform as an integral part of the security concept of the Russian Federation: Systematic dynamic assessment
Military Reviewin Yandex News
Military Reviewin Google News
136 comments
Information
Dear reader, to leave comments on the publication, you must sign in.