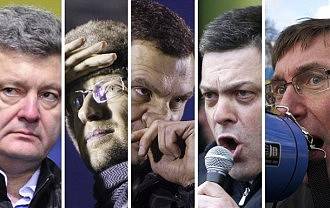 Presidential election campaign has started. A new majority in the Verkhovna Rada called early elections for 25 in May 2014. Applicants can already apply to the Central Election Commission. And 30 March registration will end. Then we will find out the full list of participants in the race. But now the “unnatural selection” has begun: some are intimidated (arson of the house of KPU leader Petro Symonenko), others are “bathed” in compromising material. The key point - who will put the West and Russia. For Ukraine, as pawns in a geopolitical war, this is important ...

The specifics of the post-Maidan election campaign are that the campaign videos and the buckwheat rations no longer work. The country is on the verge of civil war. And with the events in the Crimea - not only civil. On the streets, people walk with guns. Uncontrolled gangs under various brands (local “Self-defense”, “People’s Patrols”, etc.) seize administrative buildings, stop business operations, unload transit vehicles, burn and rob houses of politicians. And all this in conditions of complete impunity, because the police fell into a stupor and continues to be there, despite the appointment of the new leadership. Especially at the level of grassroots structures.

However, despite the randomness of land squatting, which affects workers of various organizations, ranging from the management of the South-Western Railway and ending with the newspaper Uryadoviy Kuryar, the targeted nature of the pressure can be traced very clearly.

The main blow is not aimed at the regionals, who, apparently, are not considered to be serious rivals due to their organizational weakening and complete demoralization. And the communists.

In a short time, the house of the son of Pyotr Simonenko was hacked and burned, where Pyotr Nikolayevich once lived with his wife, journalist Oksana Vashchenko, and two young children. At the same time, before burning down the house with all its contents, selected TV channels were launched there, showing all the details of the interior: from the piano (white) to the toilet bowl (not gold).

Why exactly KPU has received increased attention? The answer is obvious. If Pyotr Simonenko goes to the polls, his main ally will be ... the socio-economic situation in the country. Given the current state of affairs, as well as the promise of the new Prime Minister Arseniy Yatsenyuk to carry out reforms according to the plan outlined by the IMF, at the time of the election, the country will just reach the pen, and the common people will be on the verge of a social explosion.

In addition, the oligarchs, who led their people into the government, and independent political players fear that Russia, due to the absence of other real candidates not from the opposition, can put on Simonenko.

Indeed, in the center is really emptiness. Kharkiv Mayor Mikhail Dobkin as a presidential candidate is not serious. The new face of the Party of Regions, Sergei Tigipko, has lost the structure of "Strong Ukraine" and can hardly rely on frightened regionals. Of course, he will go to the polls. Again. And lose again.

It’s ridiculous to talk about independent candidates in the conditions of “paramilitary status”. Small fry type ex-minister of social policy Natalia Korolevskaya (considered the creature of the head of the Party of Regions faction Alexander Efremova) or scandalous “radical with forks” Oleg Lyashko will only add confusion to the overall picture.

As for the right flank, there will be there, as in the subway at rush hour. Vitali Klitschko (who did not go to the government so as not to stumble over unpopular decisions) and Yulia Tymoshenko (who was stopped by compromising about the fun pastime of her daughter in Rome during the execution of Maidan) have already declared their ambitions.

Freedom leader Oleg Tyagnibok and Right Sector leader Dmitry Yarosh are thinking about participating in the race. And if they go, they will “butt” on the same electoral field.

Petro Poroshenko, who has no structures for elections, but many ambitions, and, perhaps, Arseniy Yatsenyuk, will appear there. If the reforms do not finally finish it, and so weak rating.

Everyone is waiting on whom the West will bet. But the West is changing sympathies. For example, if before Angela Markel definitely put on Tymoshenko, the latest publication in her favorite newspaper Die Welt changes everything. Yulia Vladimirovna was severely called "a copy of Yanukovich, but with a scythe." A favorite of Germany (the most influential state of the EU) is clearly becoming Klitschko. At the same time, the recent meetings of Tymoshenko with senior American dignitaries suggest that she might be elected in Washington.

This is what the oligarchs crave least of all with whom, being prime minister, she led an “invisible battle”: re-privatization, gas confiscation and so on. And, rather, put on Yatsenyuk or Klitschko than Tymoshenko. Poroshenko’s additional difficulties will create this: money bags do not like when one of them rushes forward.

The question arises: is there at least one real candidate in this diversity of political "fauna", whose chances are obviously greater than that of others? Apparently, no. Is there a possibility that in such a situation elections may not take place at all? Yes. And the closer to May, the likelihood of such a denouement grows ...