The colonial status of Ukraine in the European Union: the language of documents 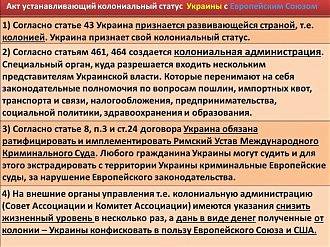 According to the 1-C, 1-D annex to the treaty, Ukraine over the years 10 gradually refuses all currently existing export duties. This will lead to a sharp decline in budget revenues - by 10-15% - and the volume of social benefits.

Art. 12. Ukraine should reduce the stock of small and light weapons.

Art. 19. Ukraine receives only a small simplification for visa processing with the EU. Of course, the visa-free regime, in the EU's opinion, is only for first-grade countries, and this is normal for a country that is entering servitude.

Art. 24. Judicial cooperation between the EU and Ukraine will be based on the conventions of the Hague Conference, it is intended to strengthen mutual legal assistance and extradition, to join the documents of the UN and the Council of Europe - in particular, the Rome Statute of the International Criminal Court.

Art. 32. The ban on Ukraine to maintain or introduce export subsidies for agriculture.

Art. 43. Ukraine is recognized as a developing country, that is, a COLONY.

Art. 56. Ukraine should take measures for the gradual adoption of EU technical regulations. Not a single enterprise in the real sector of the economy is ready for the transition to the norms of EU technical regulations. The transition of all industries to EU standards (for the period before 5 years) and competition with EU producers will lead to bankruptcy of enterprises.

Art. 76. Ukraine is obliged to reduce the cost of small and medium enterprises. That is, the ban on supporting small and medium-sized businesses, which is basically national, is within the jurisdiction of Ukraine, it is a direct ban on the development of Ukraine.

Art. 154. Ban Ukraine from entering the EU market. Because it is a colony, they do not give it access to the market. And the EU will have it.

Art. 286. Ukraine should create courts independent of the Ukrainian people. That is, the courts that will not obey the judicial system of Ukraine.

Ukraine’s acceptance of the terms of this agreement strengthens:

1) the colonial exploitation of Ukraine;

2) eliminates the remnants of sovereignty, both politically and economically.
The implementation of a free trade zone will lead to a chronic recession of the Ukrainian economy, economic losses, a multiple of the reduction in GDP. Ukraine does not receive anything from the agreement.

Entering the EU market? Not.

But what are the “pluses” - a ban on development, the priority of international law, the creation of a supranational governing body, ordinary citizens of Ukraine will not be able to pay for gas and electricity. And millions of people will die from starvation, thereby maintaining a high standard of living for US and EU citizens.

The contract itself on the website of the Cabinet.

Ctrl Enter
Noticed oshЫbku Highlight text and press. Ctrl + Enter
We are
List of destroyed the largest and most high-tech enterprisesSergey Kurginyan: The meaning of the game - a report on the WTO
Military Reviewin Yandex News
Military Reviewin Google News
90 comments
Information
Dear reader, to leave comments on the publication, you must sign in.